The grapevine moth flocked to South American vineyards more than a decade ago. Now, wineries are utilizing a sustainable method of mating disruption to get rid of them. 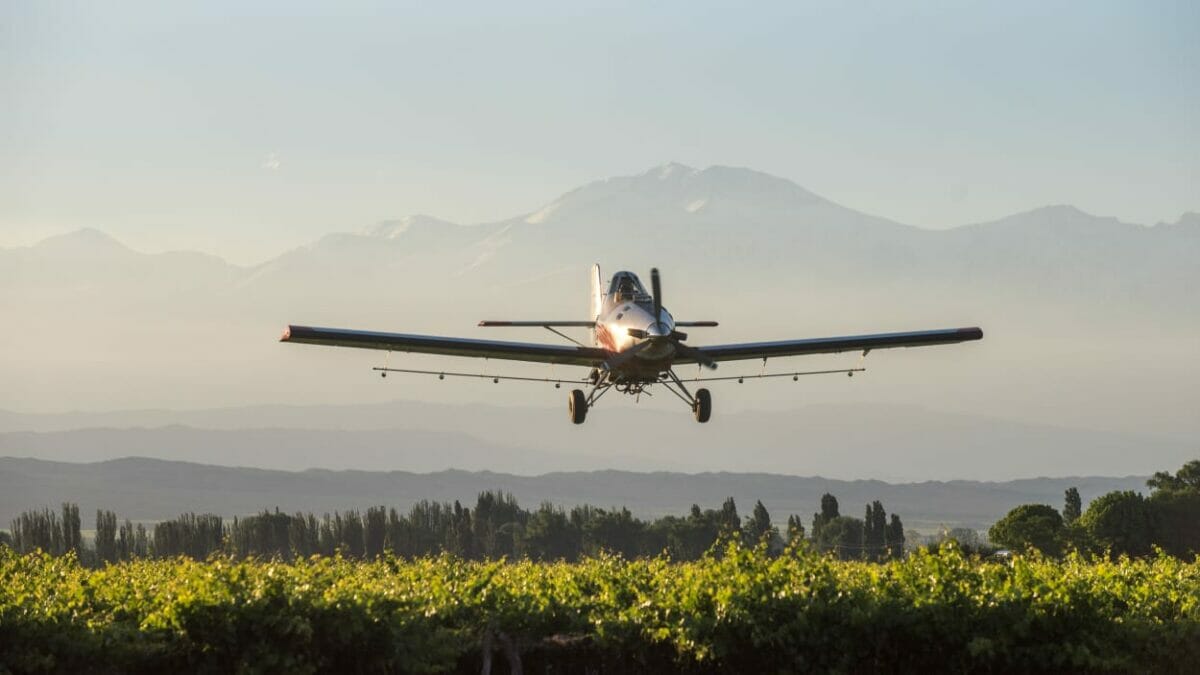 In 2008, a new pest appeared in South American vineyards for the first time. The European grapevine moth, Lobesia botrana, was detected in Chile and soon after spread to Argentina, where it affected at least 30 percent of vineyards.

The grapevine moth, which can feed on either flower or fruit, is a serious threat. If the moth attacks mature grape clusters, the berries can become further damaged or infected with a fungus called botrytis, leading to a reduced grape harvest, drop in wine production and, ultimately, major profit loss.

Argentina, the fifth largest wine-producing nation in the world, recognized the risk immediately. In 2011, the country declared a “phytosanitary emergency” in order to get the grapevine moth problem under control and keep it from spreading from Mendoza—world renowned for its Malbec wines and home to more than 356,000 acres of vineyards—to other nearby wine regions.

At Santa Julia Vineyards, vineyard manager Edgardo Consoli quickly implemented a treatment that utilizes the use of artificial pheromones, which replicate the sex hormones released by female moths that enable males to locate them more easily.

At the beginning of spring, Consoli hangs pheromone dispensers, which are applied by hand, throughout the vineyards—a method that’s been used to protect European vineyards in Italy, Germany and France for decades. The dispensers are made of a porous plastic that slowly releases the pheromone over many months. When the males follow the scent, they’re tricked into flying to areas where there aren’t actually any females to mate with, preventing them from producing more offspring and, therefore, protecting the vineyards from future pests. This strategy of mating disruption doesn’t require the use of any insecticides, and it is permitted in organic farming.

“It’s a fantastic solution that allows us to reduce the size of the [grapevine moth] populations,” says Belén Iácono, chief agronomist for Catena Zapata’s Adrianna Vineyard in Mendoza, which also uses pheromone devices in the vineyards. “It’s very efficient, so we haven’t had damage in the vineyards, as it controls plagues throughout the whole cycle.” 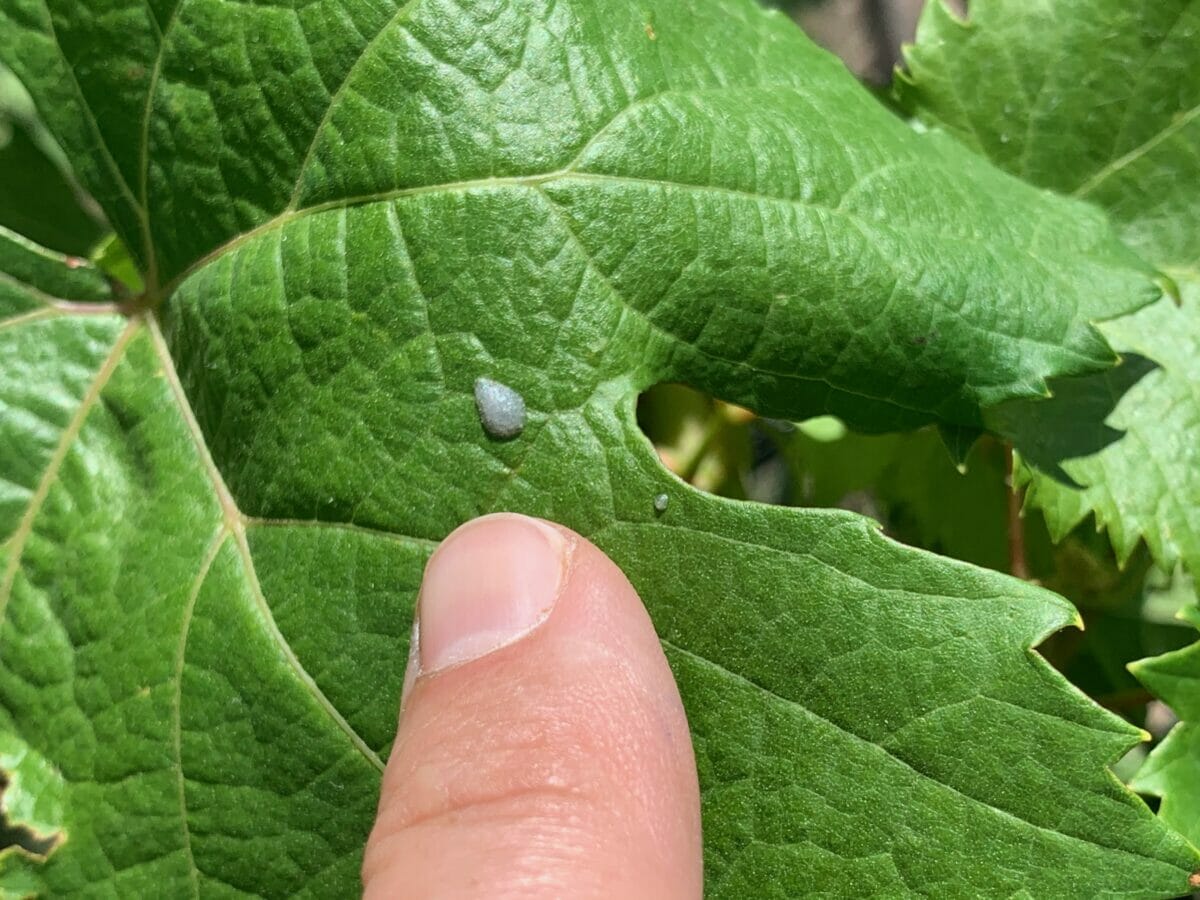 A micro-dollop of SPLAT Lobesia in the field. Photo courtesy of ISCA Inc.

The sex pheromone treatment has been effective, rescuing grapevines across Argentina. But not everybody was satisfied with the distribution devices being used, which are costly and require a great deal of labor to install year after year.

That’s why the agricultural biotech company ISCA, which specializes in sustainable pest control, stepped in to offer a better solution. In 2018, ISCA released SPLAT Lobesia, a liquid, non-toxic and biodegradable pheromone that is aerially applied via airplanes or drones. The solution consists of food-grade components—mostly oils, waxes and water—that hold the synthetic pheromone in place.

“All other solutions with relevant sales in the market rely on a relatively large plastic reservoir or plastic devices that need to be placed in the field one by one,” says Agenor Mafra-Neto, CEO of ISCA. “Manual labor is a problem in many geographies…and these manually applied products [are] extremely difficult and expensive to apply in the field.”

In Mendoza, the Institute of Agricultural Health and Quality (ISCAMEN) has embraced SPLAT Lobesia, applying it to tens of thousands of acres of vineyards across the valley. Treated areas have seen populations of grapevine moths drop by up to 95 percent. The product is also used in other parts of the world, including Turkey, but Mendoza has the largest SPLAT Lobesia program, according to Mafra-Neto.

SPLAT Lobesia has helped Mendoza for the last three years, and now, ISCA is looking to take the technology to Chile and Europe, the other major wine-producing markets. The product’s success in protecting Argentinian vineyards could also have positive implications for solving pest issues for other crops. Because the synthetic pheromones target a specific species, it does not affect other non-target organisms, including pollinators and other beneficial insects, as well as humans. ISCA also carries mating disruption products for pests that affect tomatoes, apples, peaches and nuts, and for row crops such as corn, soy and cotton.

Mafra-Neto hopes to see more growers embrace this sustainable method of pest management. “The penetration of the pheromone mating disruption industry has been relegated to a very small slice of the agricultural market,” he says. “[We’ve reached] just over a million acres globally out of the hundreds of millions of acres of agricultural crops that need safer pest control.”