An Indigenous Community Reclaims Land in Chile for Organic Agriculture

The Mapuche of Comunidad Miguel Yevilao hope a native berry can bring them prosperity.

Three hours south of Concepción in the central coastal area of Chile lie the rolling green hills of Comunidad Miguel Yevilao. It’s one community of many that make up the Mapuche, an Indigenous people who comprise about 12 percent of Chile’s population. Miguel Yevilao is home to 55 families—or just over 200 people—and some truly impressive produce, including the maqui berry.

This berry, which is native to Chile, is a central part of a larger plan by the Mapuche in this community to reclaim land once taken from them and convert it into farmland. The maqui is prized for both its flavor and its impressive antioxidant quantity, more than three times that of blackberry and strawberry. Maqui juice tastes like a mix between pomegranate and blueberry, with a tannic burn to the back of the throat and a satisfying sweetness. Visitors can sample the berry as a juice but also as a preserve for dessert, as jam and in teabags. The Mapuche consider the maqui berry medicinal and consume it as juice, cookies and flour.

“We have always drunk maqui. The tree is sacred for the Mapuche people,” says Segundo Miguel Yevilao Huenchullán, the community’s president, through a Spanish translator. “That means it fulfills three functions, which is why it is so important to us. It is a sacred, medicinal and nourishing tree.”

The juice, he says, is always in demand and it basically sells itself. But the community produces much more than the maqui. In 2018, the group became the first Mapuche community to have part of its farmland certified organic. Each family in Miguel Yevilao is involved with farming in some way, and six families work with certified organic produce in particular. 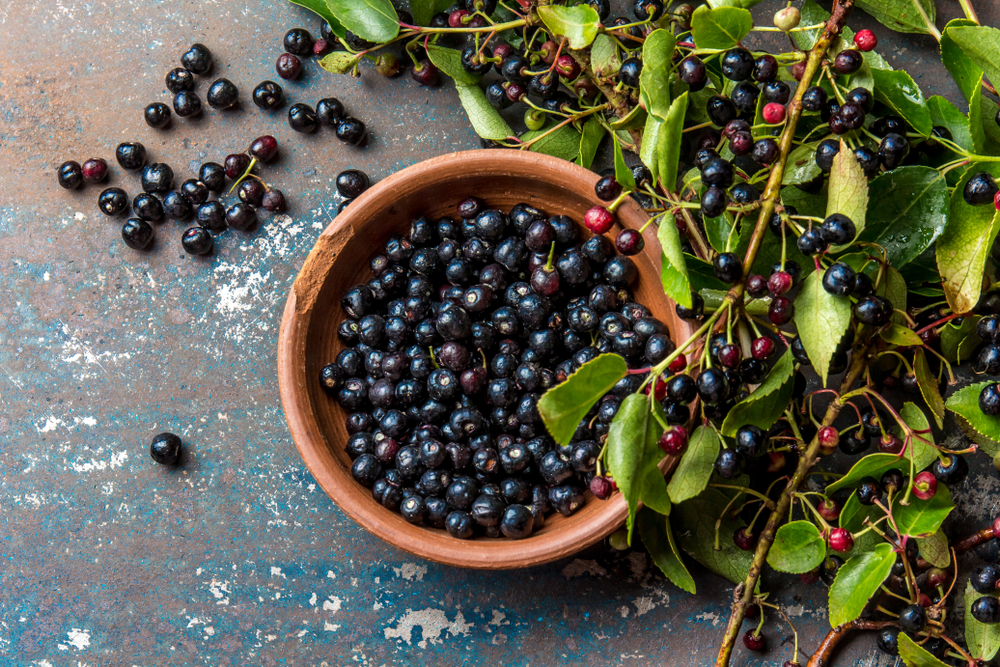 Juice made with maqui berries has a sweet taste and a tannic burn. Photo by Larisa Blinova/Shutterstock

The purpose of championing eco-agriculture is twofold, Segundo says: It provides an economic opportunity for the community, and it helps move them closer to food sovereignty. Food sovereignty, defined by the first global forum on the topic, means “the right of peoples to healthy and culturally appropriate food produced through ecologically sound and sustainable methods, and their right to define their own food and agriculture systems.” Segundo says the community’s goal is to produce 100 percent of its own food, 100 percent organically, but it’s not there yet.

A turn to farming

The broader Mapuche have made international headlines for their conflicts with the Chilean government over land rights and recognition of their culture. Mapuche land was sold off en masse between 1976 and 1990, with much of it turned into forestry land for non-native pine and eucalyptus trees.

At Miguel Yevilao, the heart of that conflict is ever-present. It wasn’t until 1995 that Miguel Yevilao received 60 hectares of land back after several Mapuche communities protested and blocked the area’s forestry roads. As of 2011, the community has 300 hectares of land—about 740 acres. It hopes for more, as commercial foresters still surround it. Segundo has said it feels as if the commercial industry wants to push the community into the sea.

In 2012, the Miguel Yevilao community commercialized its land. The community is farming on some 120 hectares of the land, and 80 hectares are being used for animal husbandry. It has yet to cultivate the rest—about 100 hectares—into farmland. “Here we do not consume pine or eucalyptus, what the forestry company produces,” says Segundo. “So that is where we made the decision to be able to commercialize, from 2012 onward.” It gave them the opportunity to create more independence from the government.

Chile remains the only Latin American country not to recognize Indigenous people in its constitution. A new constitution is set to be drafted over the coming year, and seven seats at the constitutional convention have now been reserved for Mapuche representatives. Segundo says the Mapuche have been fighting for that kind of progress for a long time.

Traditionally, the Mapuche people “were mainly gatherers,” Segundo says. But more recent generations were gardeners and farmers. Segundo and his sister Juana Rosa Yevilao Huenchullán grew up surrounded by vegetables, fruits and wheat. “We had our chard and parsley. We would play to see who could grow the best,” she says. Now, Juana continues that legacy by leading a group of women that is cultivating the organic areas of its farm and beyond. They turn kitchen scraps into fertilizer using vermicomposting techniques. 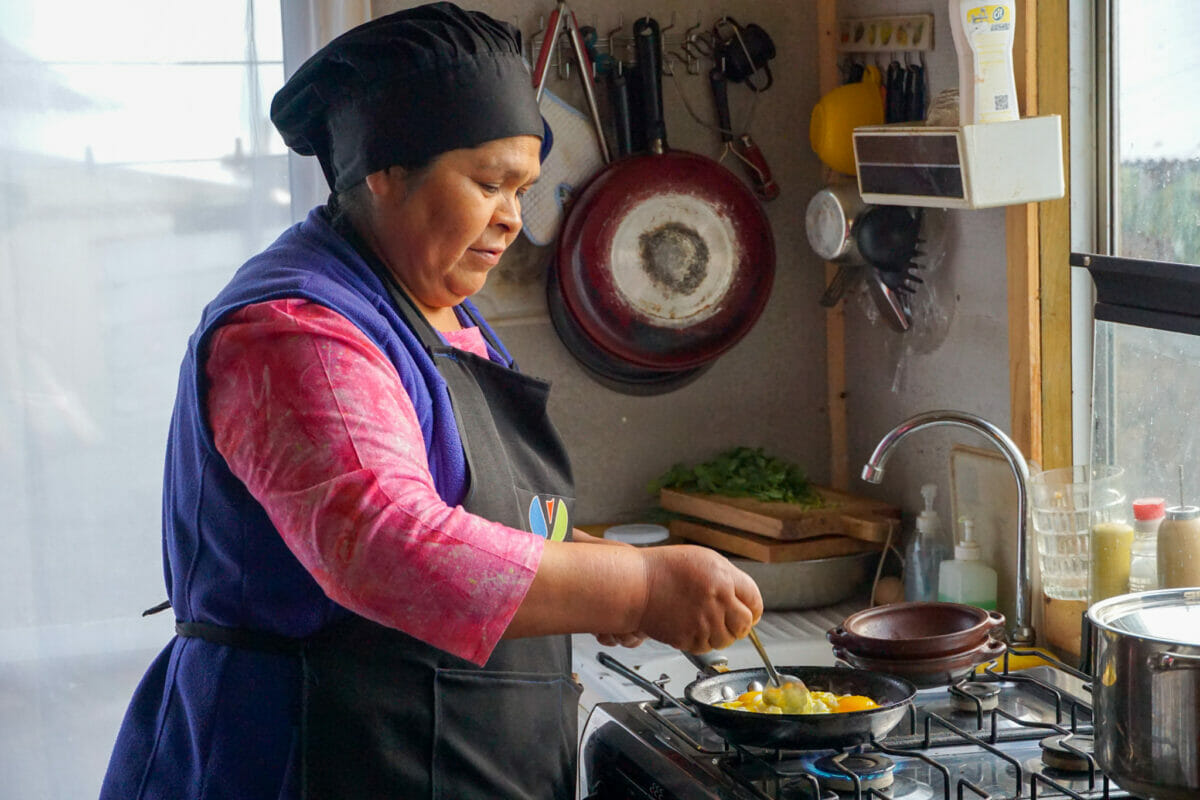 Of the 120 hectares of land used for produce, 6.5 hectares is currently certified organic. The process of certifying the community’s produce as organic was arduous. They had to document everything, such as when they enter the organic area, when they leave, the kinds of tools and water they used, the types of fertilizer and where their seeds come from, Segundo says. It was frustrating knowing that so much of the food produced in Chile, as well as imported food, was created with chemicals and little oversight, and yet their food had to go through such detailed paperwork.

But he says the paperwork was worth it. “The older people have always produced their agriculture free of chemicals. We knew that, for this society, for our customers, it’s necessary to have a certificate,” Segundo says. They’re currently in the process to have an additional 10 hectares certified by 2022.

The community has developed several popular items, including the maqui, as mentioned, but also ancestral seed potatoes that naturally contain less starch and a wheat species with minimal gluten. In addition to their cultivated land, community members also harvest ocean products such as seaweed, shellfish and other fish. Regular treats include salted seaweed, called cochayuyo, and nalca, a fibrous bamboo-like plant, which has been compared to rhubarb.

“The work is everything to me,” Juana says. She wants her grandchildren and nieces and nephews to know what it feels like to get dirty, to know how much better food tastes when it’s grown well. “The whole community is working on recovering the techniques that our grandparents used before,” she says.

Before the pandemic, Juana and other communities were busy not only farming but also hosting visitors. Agricultural producers and teachers came to learn how to create a healthy organic crop. Students from a nearby Catholic school would visit regularly to learn about their machinery and how to use it for organic agriculture. “They came to unlearn what they’d been taught at the university,” Segundo says.

International and national tourists also came to learn about the community, their agricultural work and to walk the stunning coastland. Tourists would help with the labor, harvesting produce alongside the community and then later gather to dine on the bounty. “The tourists were very enthusiastic because, after the harvest, we prepared food with the same products,” Segundo says.

But it was hard work. Juana would sometimes be up until 2 a.m., trying to get all her work done. The pandemic, for the time being, has changed a lot. Sales to the capital city, Santiago, decreased, and they couldn’t sell their products for months. Now, Juana wakes up at the not-so-early 9 a.m. and eats breakfast and later lunch with her mother. “I have the whole afternoon to be in my vegetable patch,” she says.

The Yevilao community hasn’t hosted visitors since March 2020, and that’s left it with more time to both connect with nature and reorganize to make its plots more productive, Segundo says. And because it closed to outsiders, not a single member of the community has gotten sick with COVID-19. The members hope to receive tourists later in the year, although they’re afraid of introducing the virus into their community. They’re still figuring out the details, but Segundo said they’re hoping that, in September or October, they might be able to invite people back—with COVID-negative tests in hand.

Another stumbling block came for their prized product. While their maqui berries are certified organic, their much-beloved juice is not, because they need to certify the small amount of sugar they add to the drink. They’d hoped to get that changed in June 2020 by visiting Brazil, where some organic sugar is produced, but they were unable to do so because of the pandemic. Their plan is to eventually market the juice to soccer players. “It is an energy drink with antioxidants. We believe that it benefits health,” says Segundo.

Once it’s safe again, they’d like to resume those plans. For now, their focus is to keep up cultivation until visitors can return, Segundo says.

“We are always going to grow,” Segundo says. “Pandemics can happen, natural disasters can happen, but we must be able to continue producing food.”