This Teenager Helped Launch Seed Libraries in Every State

The popularity of seed libraries has soared during the pandemic. 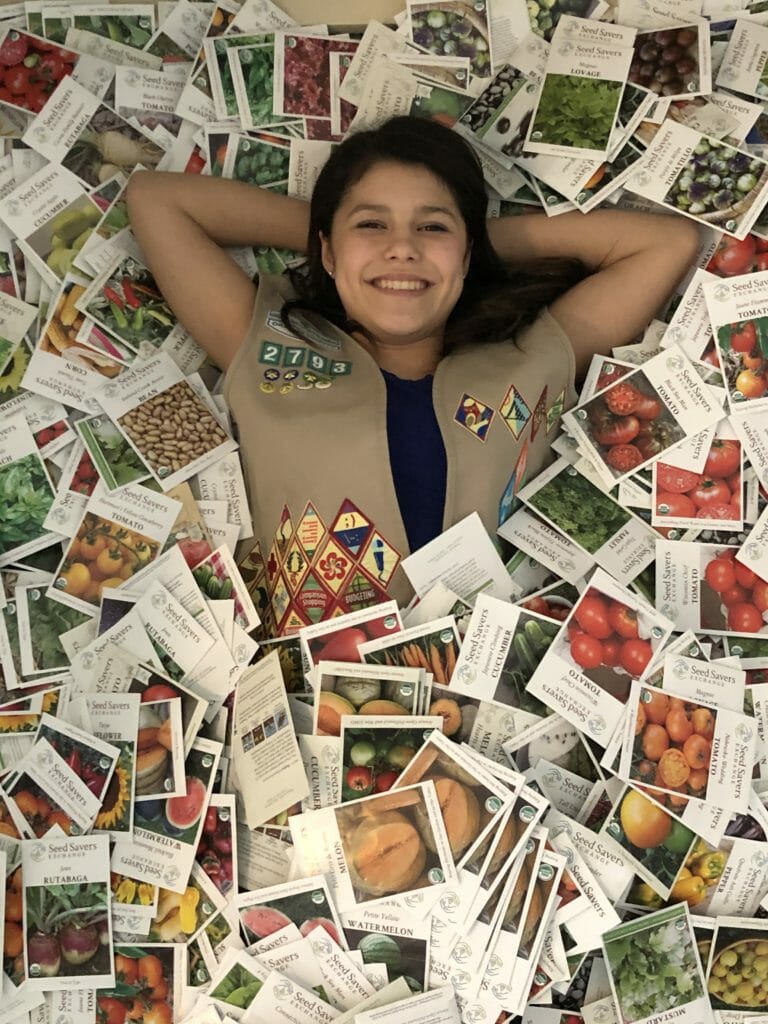 Seed libraries maintain stocks of seeds that the public can “check out” to plant in their gardens. Boxes stocked with packets of seeds are often housed in public libraries, but businesses and homeowners have also started creating mini libraries in an effort to boost food gardening and seed saving while promoting food access and security.

“Seed libraries are so important because they teach people where their food comes from,” Serratos says. “It’s made me so happy that so many people are interested in growing food and having seed libraries.”

Serratos, who is just 14, came up with the idea to start 3 Sisters Seed Box in 2019. Her goal: Send out enough starter kits to have at least two seed libraries in all 50 states. It started out as a Girl Scout project and turned into a nationwide movement. Seed Savers Exchange donated heirloom seeds for the project and the Community Seed Network mapped all of the seed library locations. Since she started her campaign, requests have flooded in via social media from communities eager to start their own seed libraries.

The first 3 Sisters Seed Box was installed in Pennsylvania in April 2020 and the last, installed in Auburn, New Hampshire, was shipped in January 2021. To date, Serratos has shipped 108 seed library starter kits to communities nationwide.

“[The seed libraries] have expanded so much because people are gardening during quarantine,” Serratos says.

Seed libraries are free and open to the public, and no membership is required. Gardeners are encouraged to save seeds and contribute them to the library so others can access them. Not everyone who takes seeds will save them and add them, so “stewards”—who manage seed libraries—often purchase seeds or request donations from seed companies to keep the libraries stocked.

Even though many of the public libraries that operate them have been closed during the pandemic (and some seed companies are sold out of popular fruit and vegetable varieties), seed library organizers have remained committed to distributing seeds.

Rebecca Newburn, a co-founder of the Richmond Grows Seed Lending Library, created mini seed libraries all over Richmond, California, setting up boxes at supermarkets, bike shops and churches to ensure that the public was still able to access seeds for their food gardens.

“The public libraries closed, but the desire to grow food increased during the pandemic,” Newburn says. “We had to transform how we were providing seeds to be able to meet the demand.”

Since the start of the pandemic, Richmond Grows Seed Lending Library has given out 20,000 seed packets compared to “several thousand” packets that went out each year pre-COVID-19.

Serratos has also been working overtime to keep up with the demand for 3 Sisters Seed Box starter kits. In addition to sending kits to libraries, schools, senior centers and community centers, the teen has also shipped them to homeowners who want to install seed libraries in their neighborhoods to provide 24/7 access to passersby.

Serratos hopes that the interest in gardening and growing food helps spark conversations about food security, biodiversity and seed saving. “We eat every day and we need to spend a lot more time thinking about where our food comes from,” she says.

This wonderful young lady may be one of our future leaders. This retiree thinks she is fantastic for what she has already accomplished.

Fantastic idea. if anyone has extra hemp seeds that would allow us to plant, (and return to the library twice as many as we receive). We want to construct a large amount of HEMP plants that can help offset carbon emissions from industry and large businesses that need to buy carbon credits.
please contact us at 9487 Shea Road, LLC. [email protected], 970-485-9901

Hi Modern Farmer, just letting you know that Facebook has blocked your content in Australia. I really wanted to share this good news story with my friends but I can’t.