Goat School is Back in Session - Modern Farmer
MTMF

Goat School is Back in Session 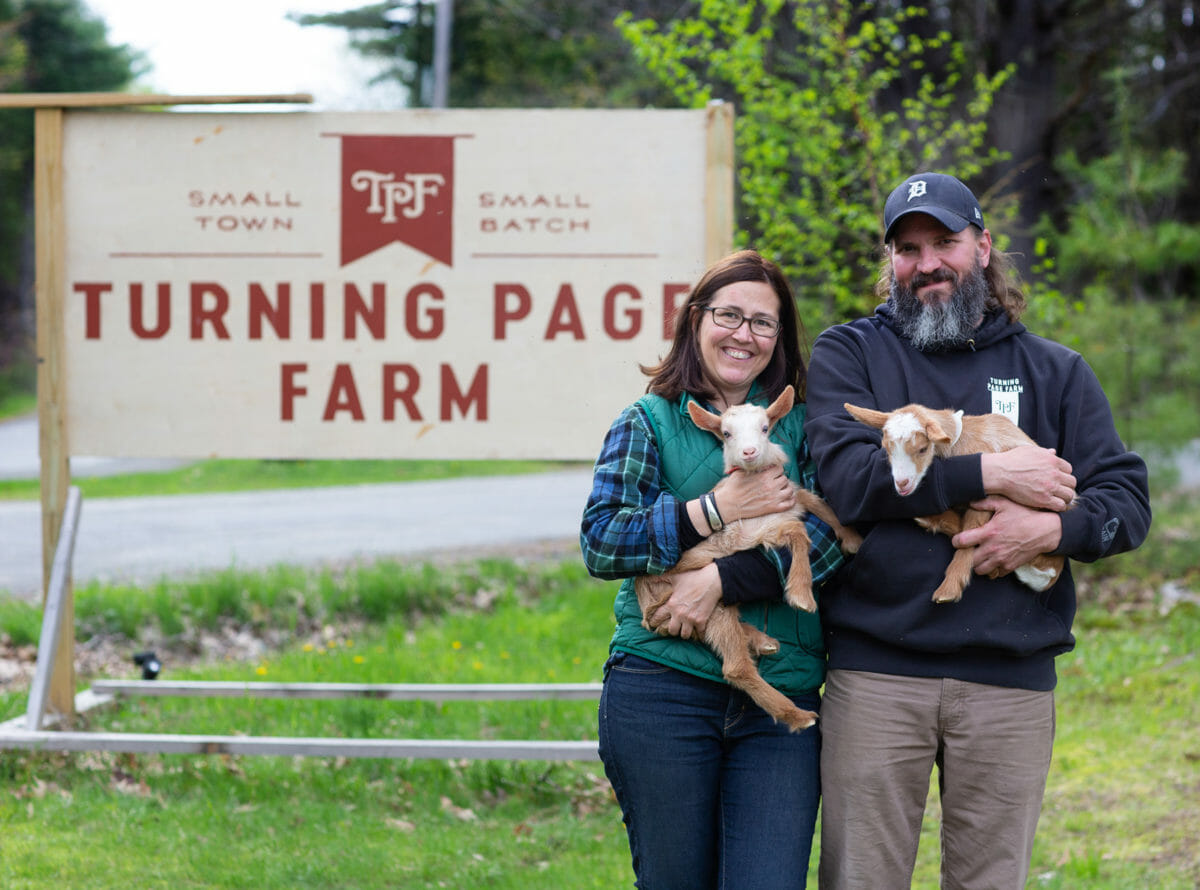 Before farm life, Joy and Tim Bueschen were living in Europe, both working high-stress corporate jobs, flying around the world, barely able to catch their breath. When they did have a few moments to spare, they found themselves fantasizing about a simpler life.

It was a Zillow listing that finally helped them turn the page onto the next chapter of their life. In 2016, they were living in Germany when they decided to buy a 25-acre homestead listed in northern Maine sight unseen. They signed themselves up for a two-day course in Maine called Goat School and got started.

“I was always interested in goats,” says Joy, who, along with her husband, now owns Turning Page Farm. “There’s no rationale; maybe it all started with the cheese.”

Although Joy fantasized about raising goats, she had never actually touched one before attending Goat School, which happened to be located just a few towns away from their new home in Monson. Run the past 20 years by a couple looking to retire, the Bueschens eventually took over the goat-teaching business and moved it to their own farm.

Using the same hand-me-down instruction manual, they’ve now taught about 75 other dreamers how to raise goats, from milking to hoof trimming. Although they took a break from classes during the pandemic, Goat School is back on this May, since it takes place mostly outdoors.

“People come from all over the country,” she says, “living mostly cubical lives dreaming about having goats some day.”

Although agritourism funds about 80 percent of their revenue, Joy also makes and sells goat cheese, salad dressings and goat milk soap from her twelve Guernsey goats. They raise forest-foraging pigs that are fed whey and the spent grain from a small-batch brewery they started on the farm. They also have a few meat birds for their own use, free-range laying hens whose eggs are like scavenger hunt prizes when they can find them, and some guinea fowl to eat the ticks. They always have their farm’s moto in mind: “small town, small batch.”

Two years after opening, Turning Page Farm added the brewery. Tim, a longtime homebrewer, says it just made sense. “Her cheese is awesome, but people don’t necessarily travel in the states for cheese,” he says. “But beer? Yes.”

Tim began homebrewing while living in Germany, where he enjoyed the country’s storied beer, but he missed the variety in style that’s present in American craft brewing. He got connected with a robust community of ex-pat homebrewers and even had the opportunity to work in a small brewery there to get experience on a big system and learn about the business.

Now he brews his favorites—English-style ales, on a one-barrel system, selling mostly as tap-room pours. Visitors can drink beer at picnic tables in the pasture-side beer garden while watching the friendly goats, who will run up to the fence to greet them. Guernseys are a rare breed in the US that, besides having milk with high butterfat content, are quite calm and docile. They’re great for a beer garden, says Joy.

The Bueschens are constantly making improvements to the destination brewery without losing that farm feel. In 2019, they built a greenhouse-style addition to the tap room for indoor seating during the cold Maine winters, heated by the sun and an exterior wood-burning boiler. This year, they’re working on installing solar panels and building a bathroom to replace a porta-potty.

The farm and brewery have a local following, but the couple also see many visitors from away who make the trip up for a tasting. And some who visit stay. The pandemic has brought an influx of people moving to rural Maine. Their small town of about 700—which in 2018 got a hip rebrand as a funky arts town when the Portland, Maine-based Libra Foundation poured funds into the downtown—saw around 20 new families move in last year, says Joy. They held a meet-and-greet for them at the brewery.

The Bueschens love to introduce their rural life to people who find it so foreign that even a rooster’s crow can be exciting. They’ve gotten used to the details of their realized dream, but they remember how special they are by showing them to others.

You can reserve your seat today at http://www.GoatSchool.com.

Where is the registration information?

A link to the class is missing!

Where is the link to the farm?