This Ugly Fish Could Be The Future of Aquaculture - Modern Farmer
Animals, Environment, Fish

This Ugly Fish Could Be The Future of Aquaculture

The monkeyface prickleback has genes ideal for sustainable aquaculture. 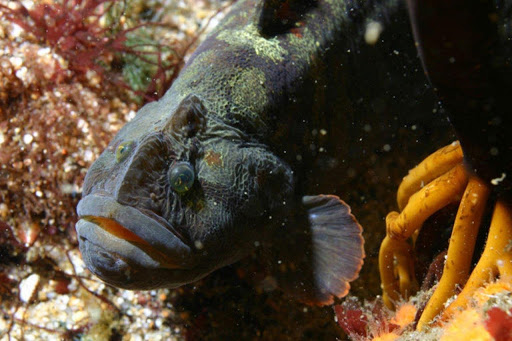 It’s a fish with a face that only a mother could love, but the monkeyface prickleback could be the future of aquaculture, or at the very least pave the way for other sustainable alternatives.

The coastal fish, commonly referred to as the monkeyface eel, lives in shallow tide pools in the Pacific Ocean and feeds off of a vegetarian diet of red and green algae. Herbivorous fish only make up five percent of total fish species on the planet, but they are more sustainable and less expensive to raise than carnivorous species, such as salmon, that make up the majority of cultured fish.

In a recent study, scientists from California studied the monkeyface prickleback’s DNA to establish what genes are necessary for breaking down plant material. They found genes that show the fish is efficient at breaking down starch. They also discovered that the fish have adapted to effectively digest lipids, otherwise known as fats, even though the fish has a very low lipid content in its diet.

Lead author Joseph Heras, says that their findings are important because the carnivorous fish primarily used in aquaculture cannot break down plant lipids—yet it is a sought after characteristic because these fish are still often fed plant-based fish food.

“With population growth and high demand to supply protein for everyone, we need to develop efficient and sustainable aquaculture practices,” he says. “The monkeyface prickleback genome shows us how a fish can thrive on a plant-based diet.”

The UN Food and Agriculture Organization has predicted that the world fish consumption will increase by nearly 20 percent between 2016 and 2030. Yet, experts in a previous 2017 study determined that annually, 18 million tonnes of wild caught fish are used to make fish meal (for carnivorous fish) or fish oil. Ninety percent of these fish are deemed food-grade, meaning that humans could be eating them.

With very little research that currently exists on the genetics of vegetarian fish, the monkeyface prickleback is only the fourth herbivorous fish genome that has been studied. Researchers say it’s also the most detailed analysis out of all four genomes that have been made available because it includes an in-depth look at the veggie-eating fish’s ability to break down lipids, which are an essential nutrient for all living things.

Heras adds that with the genome information scientists have gathered, they can now look for other species that have similar genetics and could reduce the pollution associated with current methods of fish farming.

The monkeyface prickleback has already made appearances on the menus of some high-end Californian restaurants, and is served as a culinary delicacy with a taste described as delicate and mild. But researchers say it might be difficult to have large-scale production of the fish due to the fact that the it grows slow and lives in cold water.

Whether the monkeyface prickleback is commercialized, scientists say their findings should help find other herbivore fish that could be used in aquaculture to replace less sustainable carnivorous fish.

Has anyone tried to farm the monkeyface prickleback fish ? If so, how do i contact them?

Will it grow in warm water too?

Looks like it may like to eat the kelp which it is photographed with. That may be problematical since a lot of kelp beds are under threat from changing water conditions due to climate change.