This Senegalese Rapper Thinks So.

The temperature just spiked to 100 degrees in downtown Tambacounda, and Eastern Senegal’s most famous rapper is working the desiccated streets like a politician on a walkabout. He is wiry thin in black jeans, a burgundy button-down and Wayfarer-style sunglasses, beatnik cool in scorching heat. People holler pleasantries at the man known as Negger Dou Tamba, Neggadou or just Dou: superstar, activist, zealous urban farmer.

Intensity sizzles beneath his laid-back exterior. Born Mamadou Alassane Sem in 1986, Dou has watched his hometown’s gradual depletion of young men. Clandestine migration to Europe is a tragic and complex local issue and has affected nearly everyone. Dou has a bold plan to put a stop to it through agriculture. For him, it is nothing short of a rescue mission. “This is about our survival,” he says. “If people keep leaving, we won’t have a future. It gets more urgent every day.” 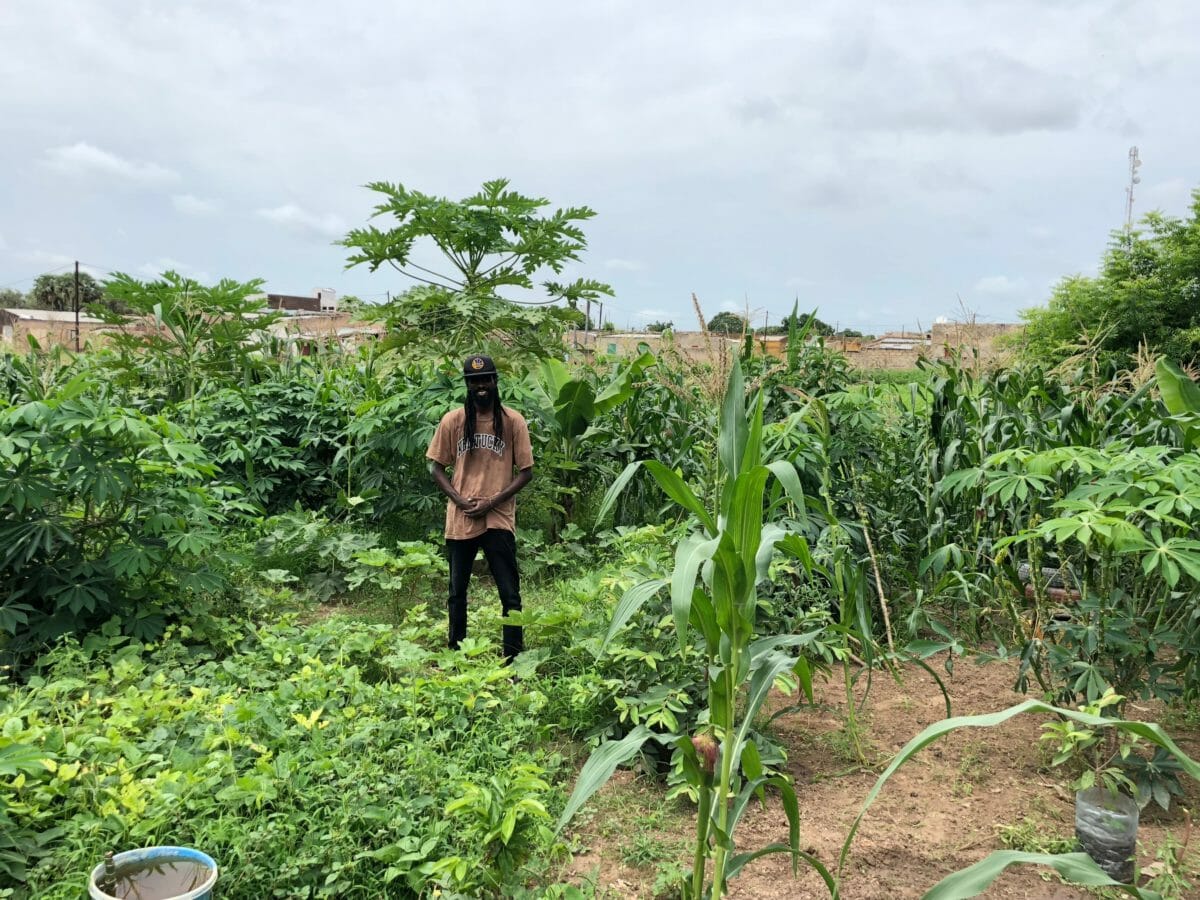 Tamba, as it is known, is an eight-hour drive east from the capital, Dakar. The city is the capital of the regional province that is also called Tambacounda, the largest and poorest state in Senegal. Here, about 75,000 people live in clay dwellings, most without running water. Acacia, baobab and locust bean trees flank the main road. Because it is situated at the crossroads of Mali, Gambia, Mauritania and Guinea, Tamba is West Africa’s transit center for would-be migrants, mostly young men with no education or opportunity, and the traffickers who exploit them. From here, thousands begin the journey through Mali and Niger to coastal Libya or across Mauritania to Morocco, where they board packed vessels for refugee camps in Europe. Multitudes have died at sea, been abused or sold as slaves in Libya or have perished in the 3,000-mile Sahara desert crossing. Those who survive rarely report on the racism, disease, unemployment and violence they find in Europe. “People think they will find El Dorado, but the truth is harsh,” he says. “They want people at home to believe the journey was worth it.”

Dou’s idea is to inspire young people to help build the economy of Senegal by returning to their ancestral roots as farmers and shepherds. “We have endless supplies of sunshine, water, soil and fertile land,” he says. “Africa is the richest place on earth. If you tie young people to the earth, it will be harder for them to leave.”

With his hip-hop bona fides and two weekly radio broadcasts, he is able to pipe his message directly to those he wishes to influence. “Let’s go back to agriculture and develop our country/It is better than begging,” he raps in Wolof in “Sinthian,” which is about a rural village where he did an artist residency at Thread, run jointly by the Josef and Anni Albers Foundation and the American NGO Le Korsa, which helps finance many of his ongoing projects. “Instead of migrating to Italy to work the land/I prefer to stay here and cultivate ours,” he sings in “Africa Wake Up.”

Three years ago, Dou went to Paris to record with a French music producer. A rap star in provincial Senegal barely ekes out a living, as the music is mostly shared for free on cellphones and platforms like ReverbNation. Like many Africans, Dou’s dream was to go to Europe and eventually bring his family to join him. Instead, he came home. “I realized my work was here,” he says. As an ethnic Pulaar, Dou says he was a natural-born agriculturist. “We are the breeders and growers of Africa,” he says. “So I said, why not be a farmer as well as an artist?” 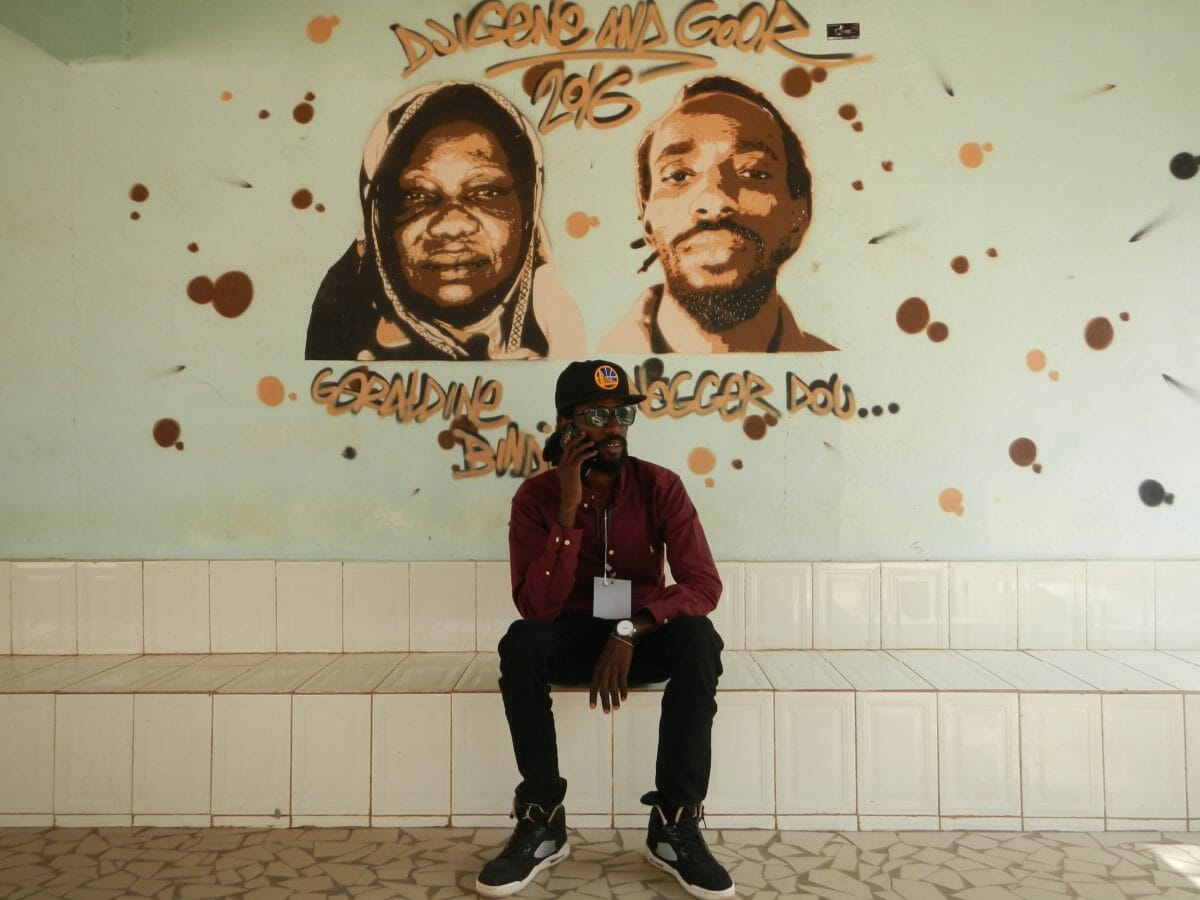 His first project began in the house where he lives with his extended family, including his mother, wife and three children. At the end of a cul-de-sac, flanked by a garbage dump on which goats graze, his backyard is an oasis of lettuce, peppers, tomatoes, squash, okra, banana, avocado and guava trees, as well as a chicken coop. “You probably won’t see Jay-Z doing this,” he jokes, lowering a bucket into his well. The venture is called Terra Nostra (Our Land), and the aim is to reap financial and health benefits from the soil, as well as spiritual ones.

In a corner of his garden, he and his friends share a platter of thieboudienne, the traditional Senegalese dish of rice, fish and vegetables. Though cheerful, Dou is visibly exhausted. “Everyone is counting on me,” he says, waving a forkful of butternut squash. “This is my fight, but it isn’t easy work.” He needs money to build wells and pumps to draw water from the ground in blistering Tamba.

One of his talents is an ability to communicate with people in power. At a meeting with Tambacounda’s governor, El Hadji Bouya Amar, the two men chat about security for the Festival of Unity, a two-day cultural event conceived by Dou to celebrate agriculture and the 13 ethnic tribes residing in Tamba. “His battles are our pleasure to work on because he wants to create opportunities here,” says the governor.

Despite the Senegalese government’s own efforts to retain the country’s youth, as well as Europe’s crackdown on immigration and political strife in Libya, 60 percent of Tamba’s population still lives in dire poverty, with many people looking for a way out. “For them, success is at the end of the journey,” says local journalist Adama Laye. “If Italy doesn’t want them, they will find another route.”

Yet, as the festival starts under a perfectly pink sunset, with Dou riding on horseback down the street, his optimism ignites the massive crowd. The air smells of wood smoke and the balmy wind of the Sahel. When Dou issues a welcome into the microphone, Guelel Diop, a 15-year-old boy, tells me, “When he speaks, I believe he is speaking to me.”

As he goes for the soul of Tambacounda, people are listening. Dou has taken his concept to Dakar and is attempting to lead other members of the hip-hop community to reap the benefits of their land as a parallel form of expression. In Tamba, four other rappers are on board with their own urban gardens. Near his home, a boy’s religious school, inspired by Dou, is busy cultivating a new green space.

His hurdles are great, but for now, his energy is unabated and his conviction is absolute. “If I fail, I will fail the youth of Tambacounda,” he tells me. “We will lose an entire city, an entire generation, an entire continent. This is why I have to succeed.”

So long is public corruption is the state religion in all African nations, nothing will improve.

When it comes to the islamist movement a people’s, it is not a migration, it is an invasion.

I studied the Quran for 12 years and the Hadith for 9 and what is happening is indeed an invasion According to Islamic Doctrine, not on migration.

Pull off the left wing blinders and open your minds to empirical evidence!

GREAT and inspiring article – thank you!

Interesting. But a long way to go.
For example who owns the land? Who reaps the benefits?
Farmers everywhere are the bottom of the food chain, to get ahead means not farming!
The French system makes it worse, get an education, to get a government job.

Water is always the first ingredient in a prosperous garden. Digging a well and the power (wind or solar) to pump the water is a challenge. Solving this would seem to be the first step. How can this be done?

Farming in Africa is very difficult because we lack modernfarmer tools. If Africa government and Africa Agricultural bank can stop the bureaucracy in the access to modernfarmer tools like as it is relaxed in the western world, the Africa youths will be encourage to farm and it can -really- stop – -the -Africa – migration – system. But not with old school farming system that is so difficult .

Well done Modern Farmer – this is the second time I’ve found an inspirational self-help article in the magazine, the first being to help to reconnect young African refugees to reconnect with the culture through goat-farming. I’m trying to get this in front of government here in Australia. Some readers expressed cynicism about government – the way to improve such situations is to catch them out doing something good. For the outsidw world to back this venture and bring it to global notice, and by including government is to change the paradigm, so get to it, crowd-funders. Accentuate the positive!… Read more »

How many government jobs are to be had?It is their land they are working on. If not them, who? Other colonizers who will steal and enslave them. The Chinese are getting very involved in Africa so I hope for the best in the farming industry along with education.

John Sperry, In a subsistence level society such as the one in Senegal being discussed, farming is vital. In this instance, farming is not done primarily as a way to riches, but as a way to feed yourself without “paying” for the food. Traditional small scale farming is also something the can be done in between other “survival activities” such as gather firewood, collecting water, tending livestock, even begging. But primarily, it frees people from the debilitating expense of feeding themselves. They can also grown additional crops to sell directly to consumes at local markets, roadside stands or door to… Read more »

Good for you young man. I hope you contact the Savory Institute in Zimbabwe. They can help you with your indevors.

Related
Technology
5 Ways Data Will Transform Global AgricultureJesse Hirsch
Lifestyle
‘We Become Part of What We Grow’: Photographing Ag in AfricaJake Swearingen
Lifestyle
Black Land MattersBrian Barth
Animals, Plants
Can Organic Farmers Weather California’s Epic Drought?Tara Lohan
wpDiscuz
We use cookies on our website to give you the most relevant experience by remembering your preferences and repeat visits. By clicking “Accept”, you consent to the use of ALL the cookies.
Cookie settings ACCEPT
Privacy & Cookies Policy