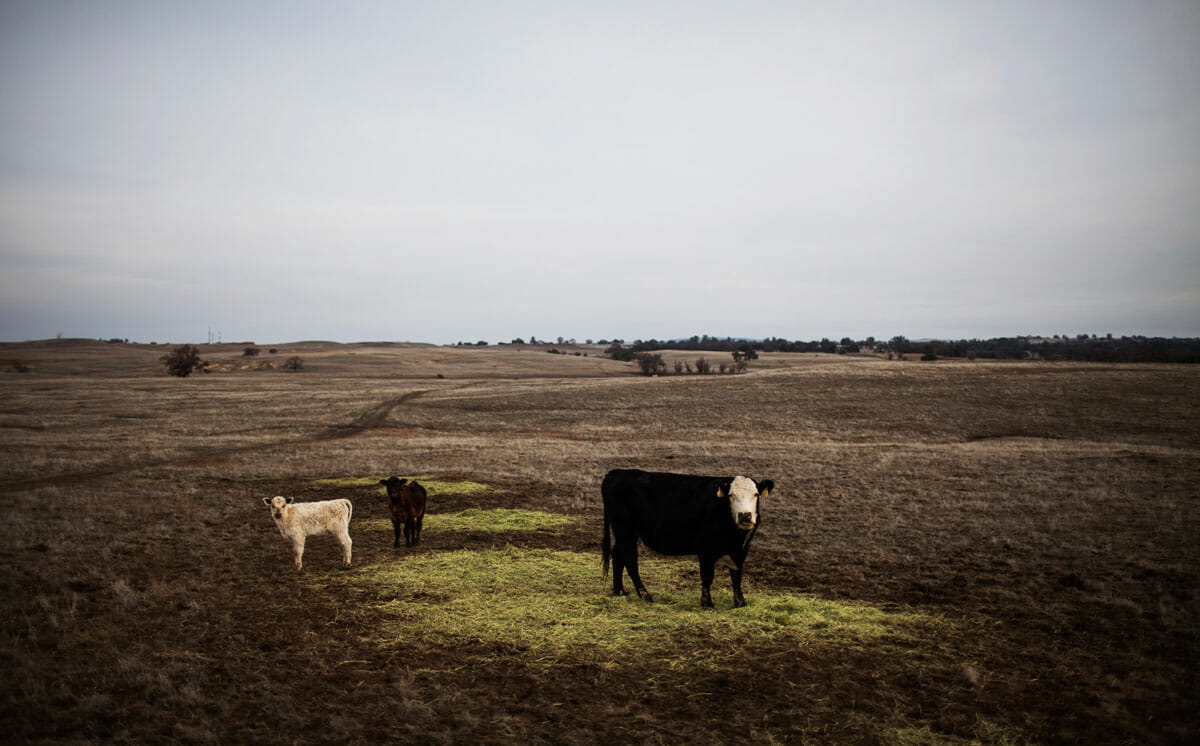 Cattle graze on hay in a landscape that would normally be covered in green grass on a ranch in Rancho Murieta, California, February 12, 2014.
Photography REUTERS / Max Whittaker
Share
Tweet
Pin
Email
362 Shares

“We didn’t have any pasture, there was no rain, and no water for the cows,” says Straus. But a few rainstorms in February have helped ease the strain for him and the seven family farms in Marin and Sonoma counties that supply milk to his business, Straus Family Creamery. Brown pastures have sprouted green – months after usual. But better late than never.

The story of California’s drought became national news after 2013 was deemed the driest year on record for many parts of the state. It’s been made worse by coinciding with California’s warmest winter on record. In February Obama posed in front of dusty fields in the state’s Central Valley, the heart of California’s $45 billion a year agriculture industry, promising millions in disaster relief for farmers.

Since then a few rain and snow storms have been only a drop in California’s nearly empty bucket. Drought monitors still list much of the state in either ‘exceptional’ or ‘extreme’ drought. Despite media reports of dust bowls, though, the fate of farmers varies widely across the state and in some cases, affects small and organic farmers differently from large agriculture operations.

So far, California’s dairy farmers and ranchers have been the hardest hit by the drought, and those abiding by national organic standards have an even tougher road. “If you want to have your milk certified organic, it means you have to have your cows grazing on certified organic pasture, and if there is nothing to graze you have to bring food in,” says Jeffrey Westman of Marin Organic.

‘A lot of guys can send their cattle to feedlots but we can’t do that, we just rely on the grass, so that’s why our prices may be a little bit more. It’s not as easy as conventional beef.’

Additionally organic producers are required to graze their animals for a minimum of 120 days during pasture season and they must get 30 percent of their feed from the pasture during that grazing season. In California, winter rains provide pasture. Straus says they usually have four to five months of pasture beginning in February. But this year the lack of rain has meant his cows were getting out to pasture at least a month late and he’s unsure how long the pasture season will be if more rain doesn’t come.

Little precipitation thus far has meant “there is just nothing to eat,” says Westman, which is why the Secretary of Agriculture gave a temporary variance in February and March to farmers and ranchers in designated drought disaster areas (which is almost the whole of California). This means that organic hay can be supplemented instead of pasture, but finding that hay is no easy feat and what is available is much more expensive. Dairy farmers and ranchers must compete with global markets, as California hay is also shipped overseas to Asia ”“ and many who’ve seen local hay supplies dry up have had to look to Oregon, Nevada, Texas, and in some cases, the Midwest, for supply. The increased cost has forced some to sell off parts of their herds or move them out of state.

Jesse Fouch raises grass-fed beef in the Sierra foothills of central California. Being a grass-fed producer means Fouch can raise his animals on pasture or hay but both are hard to find right now. Fouch raises his animals entirely on grass — they are “grass fed” and “grass finished,” which means they won’t be eating feedlot corn, no matter how bad the drought gets.

Fouch says that he’s doing all he can to fatten his cattle to fulfill orders in June and after that he plans to cut his herd in half and hope his business can limp along for another year.

“It’s important for our customers to know that with grass-fed beef we don’t have a lot of options,” says Fouch. “A lot of guys can send their cattle to feedlots right now and weather it like that but we can’t do that, we just rely on the grass so that’s why our prices may be a little bit more, it’s not as easy as conventional beef.”

Westman echoed Fouch’s concerns about higher prices, and whether consumers will fork out extra dollars during a tough year.

“Honestly, I think this is probably our new reality,” says Westman. “Food prices in general, especially proteins like beef and any kind of dairy, are going to be more expensive if you want it local and organic. We hope that consumers can understand that and budget properly for it.”

When it comes to organic produce, consumers may also see less availability and higher prices, although it’s too soon yet in the season to know what the full impacts may be. Some organic growers even surmise that their practices may actually help them weather a drought better than competitors.

Vernon Peterson runs a farm share delivery service in the Central Valley, Abundant Harvest Organics, and contracts with a variety of organic farmers. “Everyone is in a different spot,” he says. Peterson has had to abandon one well and boost horsepower on three others. Drilling a new well could cost $50,000 or a million dollars, he says, depending on the location. For a small farmer, that could mean game over.

And drilling more and deeper wells is another facet of California’s water crisis. “These are just temporary solutions as the water table falls and falls and we don’t replenish it,” says Peterson.

If it sounds like farmers markets will be bare this spring and summer, don’t despair just yet. Many small and organic farms are outside the parched Central Valley and have more dependable water supplies. The biggest indicators of how well a farm weathers the drought is mostly “dependent on the location of the farm, the water supplies available, and the efficiency measures taken by a farm,” says Heather Cooley, a water and agriculture expert at the Pacific Institute.

Small farmers could be at a disadvantage when it comes to efficiency measures that are pricey (Cooley recommends micro-sprinklers and drip irrigation for starters) or simply take a long time to install.

Nigel Walker, who runs Eatwell Farm in Dixon, 23 miles southwest of Sacramento, is one of the farmers transitioning to drip – slowly.

‘As an organic farmer you’re building humus in the soil which means its water-holding capacity is greater. When it rains, your soil is more like a sponge to suck up that water, so we are in a better position to utilize the water.’

“We use a lot of drip irrigation and we’re moving in the direction with various technology of only irrigating at night,” says Walker. “But that costs me a lot of money to set up and it’s a five to 10 year journey for me.”

But Walker is one organic farmer who says he’s actually “sitting pretty” right now, despite the dire water predictions. “When we bought this farm 16 years ago we made sure there were two sources of water,” says Walker. He has a deep well and access to water from a reservoir, Lake Berryessa. Not that he hasn’t felt any effects. He’s had to irrigate throughout January, a cost for which he didn’t budget.

But Walker believes being organic helps.

“As an organic farmer you’re building soil and you’re building humus in the soil and that means the water-holding capacity of the soil is greater. And when it rains, your soil is more like a sponge to suck up that water,” he says. “If you have a very heavy rain event the soil doesn’t just wash away with the top soil. So we are in a better position to utilize the water and keep the water on the farm.”

Where dairy farmers may be at a disadvantage during a drought because of organic standards, fruit and vegetable farmers may have an edge. Cooley says there is not data yet to understand if organic farms can weather droughts better, but the higher soil quality can definitely help with water retention.

“When you buy organic produce, there is more than just getting great produce,” says Walker. “A lot of the techniques we do conserve and build soil. Those techniques work great in a drought.” Which means “drought friendly” may be another reason conscientious consumers have for shopping organic.