For thousands of years, breadfruit grew in the Pacific Islands, where it was a staple in locals’ diets. It’s time to give it another look. 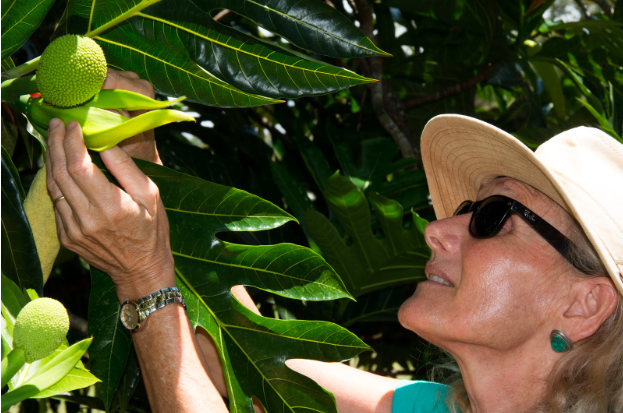 In the months before Hurricane Maria hit, Puerto Rico was experiencing an agricultural renaissance. The island territory had long imported the majority of its food, but local farms were booming, sending more produce, coffee, and milk to market than ever before. But by the end of October 2017, more than 80 percent of the island’s crop value had been destroyed, leaving the island’s people not only destitute, but vulnerable as they awaited food shipments from the continental United States.

In many rural areas, just one tree was left standing—breadfruit.

For thousands of years, breadfruit grew in the Pacific Islands, where it was a staple in locals’ diets. Shaped like a dimpled green grapefruit, breadfruit belongs to the fig family and is one of the most productive foods in the world, with a single tree yielding upwards of 150 fruits each season.

As islanders expanded across Oceania, it’s believed they ferried breadfruit plants in boats between low-lying atolls, unsure of what food they would find in their new locales. Spanish voyagers who arrived in the late 1500s documented the prolific plant for the first time in their journals. And in the late 1700s, the British Empire established breadfruit plantations in Caribbean colonies to use as food for slaves, where it gained a notorious reputation. By the mid-20th century, thanks in large part to this association and environmental changes, the fruit was falling out of favor, with large agroforests of breadfruit disappearing entirely.

That’s when Diane Ragone stepped in. Though she hated breadfruit, known as ‘ulu in Hawaiian, the first time she tried it (unripe in a potato salad on Kauai in 1979), she became hooked on the bizarre fruit’s starchy flavor when she traveled to Samoa six years later. Moreover, she saw its enormous potential for improving global food security—80 percent of the 815 million people afflicted with hunger live in areas suitable for breadfruit cultivation.

Ragone threw herself into studying every missionary and explorer’s account of breadfruit in hopes of figuring out how to reinvigorate breadfruit consumption and slow global hunger. For three decades, she traveled to more than 50 islands scattered throughout Micronesia, Polynesia and Melanesia, collecting as many varieties as she could find. In doing so, Ragone became a kind-of Jane Goodall of Breadfruit.

On a spring day, Ragone stands amid an experimental agroforestry grove in McBryde Garden on the southern end of Kauai, shaded by the trees’ broad, fringed leaves. Sticky latex sap oozes out of the trunks. Since 2002, she has served as director of the National Tropical Botanical Gardens’ Breadfruit Institute, leading ground-breaking research on the cultivation of breadfruit and marketing the benefits of the tree. Breadfruit is high in fiber and rich in minerals—which can be hard to come by in many tropical locales—and has the potential to replace non-local foods like potatoes. More than 150 varieties of breadfruit—120 of which were collected by Ragone—now grow in the research garden, marked with small metal tags that note where they were collected and by whom. 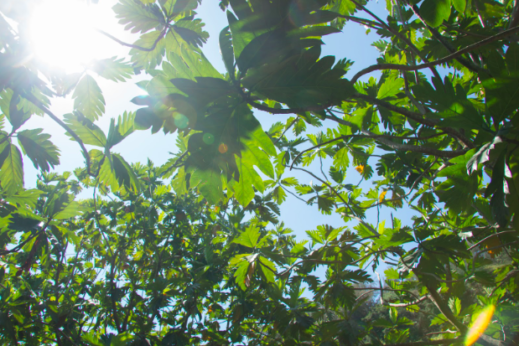 In 1996, Ragone and researchers from around the world began studying how to grow the right combination of tree varieties to allow for year-round production, given that most varieties are seasonal. By 2009, they had cracked the case, and began shipping trees to farmers around the world as a means to combat global hunger. A single breadfruit tree, the initiative posits, can feed a family of 4 for 50 years. More than 100,000 young trees have since been sent to 45 countries.

“When I started my work in 1983, [breadfruit] was a really under-appreciated, under-utilized crop,” says Ragone. “We absolutely revolutionized the potential for breadfruit as a crop for small-holder farms and economic development.”

Puerto Rico was one of the many islands that stood to benefit from breadfruit, given its reliance on food imports. Like Hawaii, the island was importing upwards of 80 percent of its food, making it an ideal candidate for breadfruit cultivation. Prior to Hurricane Maria, the Global Breadfruit Team had already shipped nearly 1,000 trees to the territory, and interest was exploding. Local entrepreneurs were even turning breadfruit, or pana as it’s known in Puerto Rico, into frozen french fries to sell in stores.

“There’s been a search for a new path for agriculture in Puerto Rico,” says Roger Still, director of global initiatives with the Breadfruit Institute. When Hurricane Maria hit, it highlighted that need. “The hurricane completely destroyed some key elements of agriculture in Puerto Rico,” he says. “But largely the breadfruit trees were left standing.”

Josh Schneider, part of the Global Breadfruit Team, explains breadfruit has developed a new reputation as a savior food following disasters—a significant improvement over its ties to slavery. He recalls working in a rural area of Liberia ahead of the 2014 Ebola epidemic. When the disease reached the nation, little of the food aid was able to get out of Monrovia, and markets and trade were shutting down. People were starving in the countryside. “The ones that didn’t were those who I had trained to find breadfruit in the forest,” he says. “That’s what kept them alive in those three months when there was no food leaving the capital city.”

In the year that has followed Hurricane Maria, cultivators have been thinking about how to expand their breadfruit projects in Puerto Rico. Though the Breadfruit Institute already had plans for a regenerative organic farming pilot project in the territory, the hurricane set organizersback more than six months, giving them time to revise their efforts and further bolster breadfruit cultivation.

“Because breadfruit has adapted for Pacific Island life, which includes typhoons and hurricanes, they are able to grow back from the root even when damaged,” Schneider, who refers to himself as the ‘pied piper of Breadfruit,’ says. “If they’re replanting in Puerto Rico, they might as well plant breadfruit.”

What happened to Puerto Rico could happen anywhere in the Pacific, given the reliance many islands nations have on foreign food. “Puerto Rico is part of a global pattern,” says Still. “There is a very small but growing breadfruit industry around the globe and the demand for local food is really helping to provide food security.” 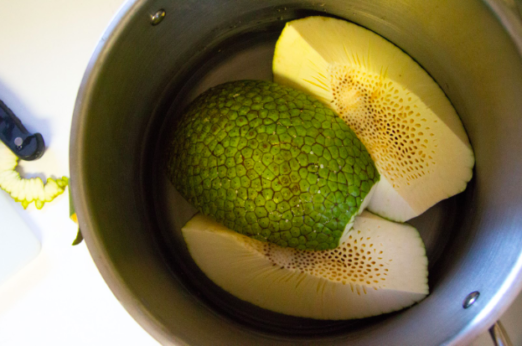 Hi
I’m David Ortiz from Carteret NJ I was wondering if you sell the breadfruit.
Thanks for growing this amazing tree.

We are on the island of St. Kitts in the Caribbean. We see a number of older breadfruit trees scattered around the island. We have had French fry’s made from breadfruit. They also sell breadfruit flour in some of the stores on the island.

Popular
7 Smokable Plants You Can Grow That Aren’t MarijuanaBrian Barth
New Solar Panels Allow Farmers to See the LightNaoki Nitta
6 Differences Between Llamas and AlpacasAndrew Amelinckx
The Cold Swim HomeMarcie Callewaert
Goat Sex: Everything You Wanted to Know But Were Afraid to AskAndrew Amelinckx
Explore Modern Farmer
Related
Food & Drink, Lifestyle
12 Next-Level Fruit and Veggie SculpturesAndy Wright and Rebecca Katzman
Plants
“Specialty Crops” Refer to Weird Things Like…Fruits and VegetablesDan Nosowitz
Lifestyle
12 Fantastic Victory Garden PostersJake Swearingen
Lifestyle
12 Vintage Pictures of Farm StandsCharles McFarlane
wpDiscuz
We use cookies on our website to give you the most relevant experience by remembering your preferences and repeat visits. By clicking “Accept”, you consent to the use of ALL the cookies.
Cookie settings ACCEPT
Privacy & Cookies Policy