Looking For a Sunchoke Recipe That Doesn’t Cause Gas? Try Lemon Juice

Jerusalem artichokes (aka sunchokes) are delicious, but known to cause painful gastric issues. This age old sunchoke recipe, however, seems to hold the cure. 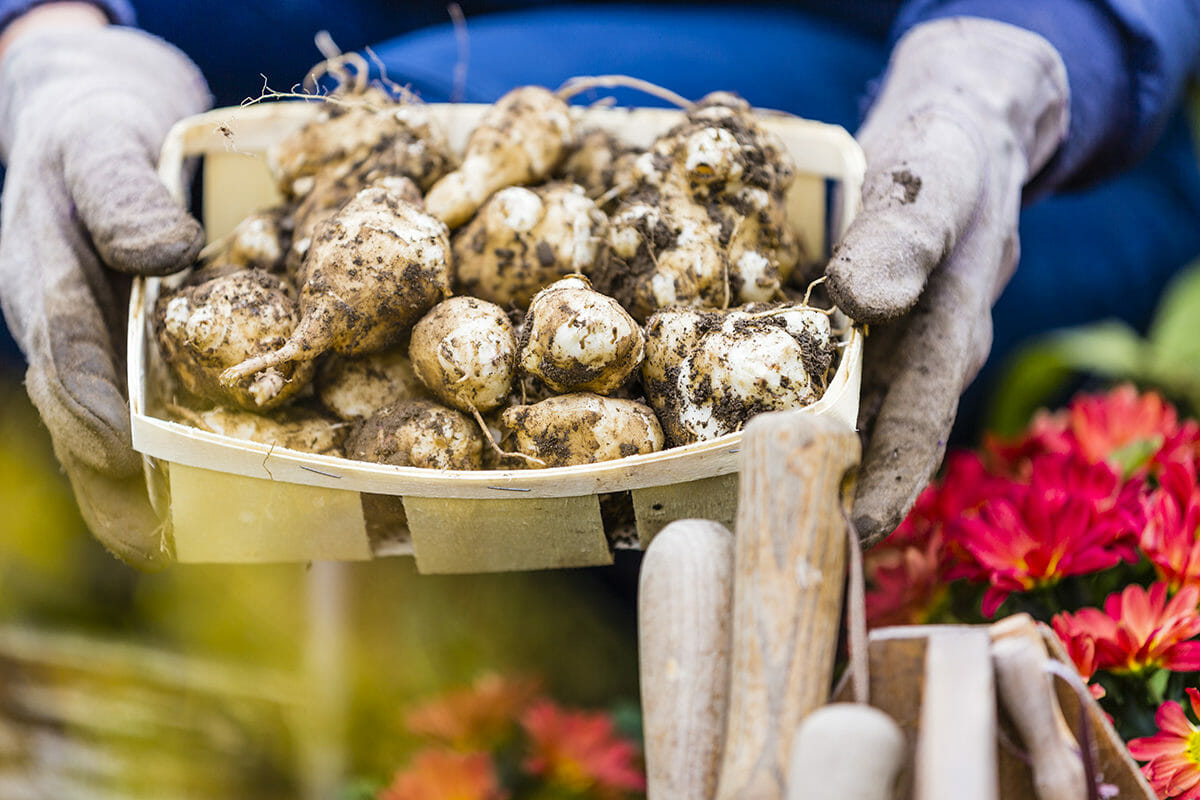 Looking for a way to prepare sunchokes - aka Jersalem artichokes - so as to not cause excessive gastric discomfort? Try lemon juice.
Photography iMarzi / Shutterstock.com
Share
Tweet
Pin
Email
1K Shares

I learned this the hard way after a surprise bumper crop of Jerusalem artichokes in my northern California garden last year. I had acquired a handful of these knobbly tubers at a neighborhood crop swap, and out of idle curiosity stuck them in my backyard soil – and promptly forgot about them. 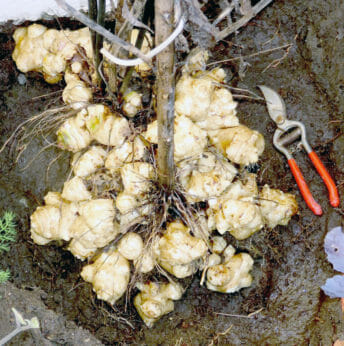 One of the author’s personal sunchoke plants. The plant grows tall above ground and produces yellow flowers (see below), but underground, it’s a mess of these knobby tubbers. PHOTO: Kristan Lawson

Within months, ten-foot stalks towered over my yard, and at harvest time in late fall, I discovered that the stalks’ underground tubers had replicated themselves exponentially. (Under the right conditions, sunchokes grow so prolifically that they’re sometimes considered an invasive species.) I found myself digging up bucketloads of tennis-ball-sized tubers, which when roasted, sautéed or boiled at first tasted heavenly – yet then, a few hours later, caused spasms of pain and auditory embarrassment at the other end of the alimentary canal. I became determined to find a way to cook these delicious little devils in such a way that they didn’t cause flatulence.

Here’s what I learned:

Ironically, the very thing that makes Jerusalem artichokes delicious and healthy is also the source of their unfortunate intestinal effects: inulin, an unusual type of carbohydrate that has recently become a trendy prebiotic supplement for gut health. Plants naturally containing inulin – and Jerusalem artichokes have a higher percentage of inulin by weight than almost any other vegetable – are naturally sweet and satisfying, yet have almost no functional calories since humans can’t digest inulin. But when enough inulin reaches the lower part of the intestinal tract, bacteria gobble it up and produce methane – which explains the brutally accurate nickname “Jerusalem fartichokes.”

RELATED: How to Store Root Crops (Including Sunchokes)

Tuber…or Not Tuber: The Basics

Jerusalem artichokes are neither artichokes nor from Jerusalem, but instead are the underground tubers of a tall plant closely related to sunflowers (for which the Italian word is girasole, phonetically bastardized to “Jerusalem” in English). They taste almost exactly like artichoke hearts, but with the satisfying starchiness of potatoes. (To avoid the cumbersome and confusing name, some retailers market them as “sunchokes,” a portmanteau of “sunflower” and “artichoke.”) 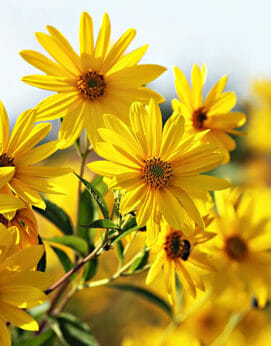 Jerusalem artichokes are neither artichokes nor from Jerusalem. They’re the underground tubers of Helianthus tuberosus, a tall plant (above) closely related to sunflowers. The Italian word for sunflowers is girasole, phonetically bastardized to “Jerusalem” in English, hence the name. The vegetable is also called a “sunchoke” – a portmanteau of “sunflower” and “artichoke.” PHOTO: Drop of Light / Shutterstock.com

As generations of cooks have learned through trial and error, no matter what you do to sunchokes – fry, boil, roast, braise, blanche, steam, simmer for hours or blast with high heat – their inulin will get you in the end.

How Much Is Too Much?

In my quest to de-gas my mountain of homegrown sunchokes, I learned that the problem was dosage: inulin become problematic only if you eat a lot of it.

“We regularly feed volunteers in nutritional trials up to 20 grams per day of inulin without significant problems,” says Bob Rastall, a biochemistry expert and Professor of Food Biotechnology at England’s University of Reading. “The issue with Jerusalem artichokes is that they can contain a lot of inulin – as much as 30 percent by fresh weight. It would be easy for a casual diner to consume enough inulin in one serving to cause problems.”

He’s not kidding: the average sunchoke tuber weighs about three ounces, or 85 grams; if it’s 30 percent inulin, that’s 25 grams of the gas-maker right there, already over the daily clinical dose. And who cooks only one tuber? I routinely would cook several at a time, just as I do potatoes. Is there any way to battle the inulin situation?

The Acid Test: A Way To Fart-Free ‘Chokes?

While researching my problem, I eventually stumbled upon an obscure folk custom that claimed to solve the vegetable’s seemingly intractable gas problem.

I learned that indigestible polysaccharides such as inulin can be converted to digestible sugars by “acid hydrolysis.” In layman’s terms, that means bathing the inulin in something watery and acidic. Lemon juice, perhaps?

Related: A Guide to the Roots and Tubers You Didn’t Know You Loved 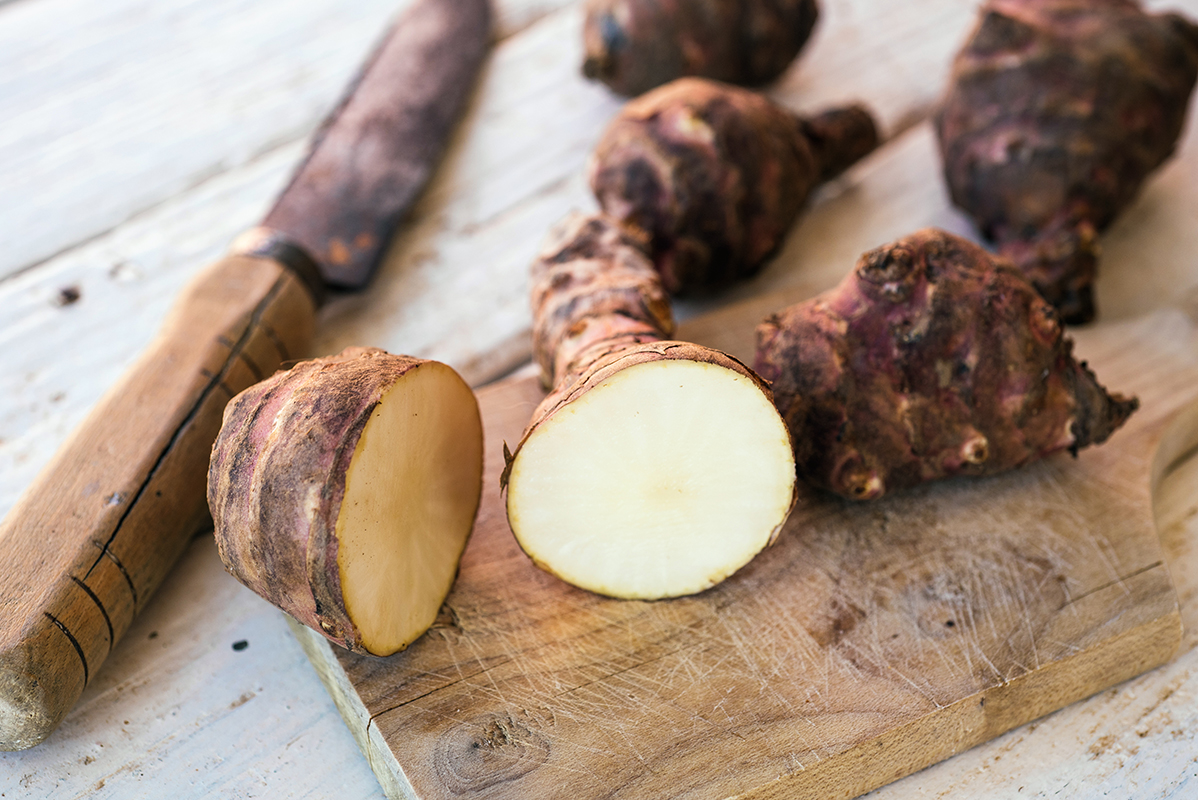 These tubers are known to cause flatulence, but if you cook them in lemon juice instead of plain old water, you’ll get a less embarrassing – but equally tasty – outcome. PHOTO: viki2win / Shutterstock.com

Sure enough, that’s just what this centuries-old recipe for rendering Jerusalem artichokes fart-free – and one of the few methods of preparation I hadn’t tried – called for: boiling them in lemon juice. Modern science concurs: “Boiling Jerusalem artichokes in an acid such as lemon juice or vinegar will hydrolyze the inulin to fructose and small amounts of glucose,” Rastall advises.

So I gave it a try, boiling quarter-inch-thick sunchoke slices for 15 minutes in just enough lemon juice to cover them. They turned out amazingly sweet and still delicious, although – as Rastall had warned – they’d lost some of their artichoke flavor. But the stove-top hydrolysis worked: Eating a heaping bowl of lemon-boiled sunchokes produced no intestinal after-effects whatsoever. Success! (Boiling them in vinegar also hydrolyzes the inulin, I discovered, but leaves them with a harsh, astringent taste.)

Option 2: Pickle the Problem Away

Related: 10 Drought-Tolerant Plants to Have a Bountiful Garden – With Less Water

How? During this pickling process, lactobacillus bacteria gorge on the inulin and convert it to gas, which manifests as bubbles in the pickling jar, rather than your intestines. By the time the pickles are ready to eat, the inulin has already been mostly consumed, and the “bacteria farts” float away painlessly when you open the jar.

A Little Inulin Is Still Your Friend

Rastall, for his part, remains a vigorous advocate for inulin and its prebiotic benefits: “I’m interested in getting people to consume more prebiotics such as inulin on a regular basis.” His fix for the overdose of inulin in Jerusalem artichokes? Build a tolerance. “Rather than avoiding all inulin, I suggest that people consume small quantities on a regular basis,” he notes. “Their gut microbiota will adapt – the proportion of beneficial bacteria will grow, while the gas-producing bacteria will diminish – and after a while they will be able to eat Jerusalem artichokes without discomfort.”

Luckily, according to Rastall, both the hydrolysis and pickling methods retain enough of the inulin for health-inducing prebiotic effects, but not enough to give you gas, even with a substantial serving.

That’s good to know. I made them for the first time this Thanksgiving roasted with carrots, parsnips, beets, celeriac, sweet potatoes, and purple potatoes. It was delicious and everyone liked it. Later that night I had the worst cramps. It felt like my appendix was going to explode. I had no idea…

Wow. VERY good article. Note. 1 Sunchoke bulb got me 15 POUNDS production. Note. If u REALLY want sunchokes, SUPREIOUR QUALITY chokes or any vegetable. Do only 1thing. Mulch. And I mean THICK. think SMOTHER. I have PURE CLAY. But with mulch, I know have black fluffy soil. Note. In nature, this plant grows only near water or constant wet feet. After all, sunflower is a plant sort of engineered to temper soggy soils. Note. Sunchokes can be stored in frozen ground. Is a life saving winter fuel food. I have hundreds lbs food invisibly stored on my property with… Read more »

I may try slicing and marinating them in a seasoned Italian dressing for a few hours or overnight before cooking. See if that works as well.

I also grow these. However, I leave them in the ground for the winter, the taste seems to get even better when harvested in the spring.
I give most of it away (I can’t eat ≈20 punds all by myself…), some people with diabetes 2 apparently enjoy thme for their slow rise in blood sugar, as compared to potatoes & grains.
Excellent recipes, I’ll try these when I get around to harvest mine! 😀

I know that a lot of people have gas problems after eating Jerusalem artichokes as did my wife, who tried several times and ways without success. However, she finally came upon a way through trial and error, which has completely eliminated the gas problem for her, no matter how much she eats. What she does is first slice the artichokes and then cover them with water with salt added. (About 2 quarts of water would get one teaspoon of salt.) She then lets them sit overnight (or the equivalent) and then rinses them. Then she puts them in a pot,… Read more »

OMG thank you so much! I always cook in bulk for the week and after 3 days of Girasole as my main veggie I stumbled upon this article while convalescing in bed with debilitatingly painful gas! So glad I kept reading to learn I can make these delicious guys edible with acid! I’m going to try sprinkling some vinegar on my already roasted girasole today and see if it works post-cooking!

I have only just discovered the amazing taste if Jer. Artis. Oh the disappointment of finding they are so anti-social. Gonna try the lemon. Thanks.

Yes, well that all seems correct, however my partner ate the same amount of my delicious J.A. soup without the lemon juice and had NO bad side effecrtsike me. For me, the different cooking method worked..jzst remember to drain off lemon juuce fore adding the rest of rhe soup ingredients to the pot😄

I was just talking to my neighbor yesterday, about Jerusalem artichokes, the gift that keeps on giving (year after year). Interesting read. My brother gave me a recipe for pickling, sovwith all of their beneficial gut health, I guess I will give it a try.

Will it still get rid of the gas if i soaked them in lemon juice raw and then fried them ??