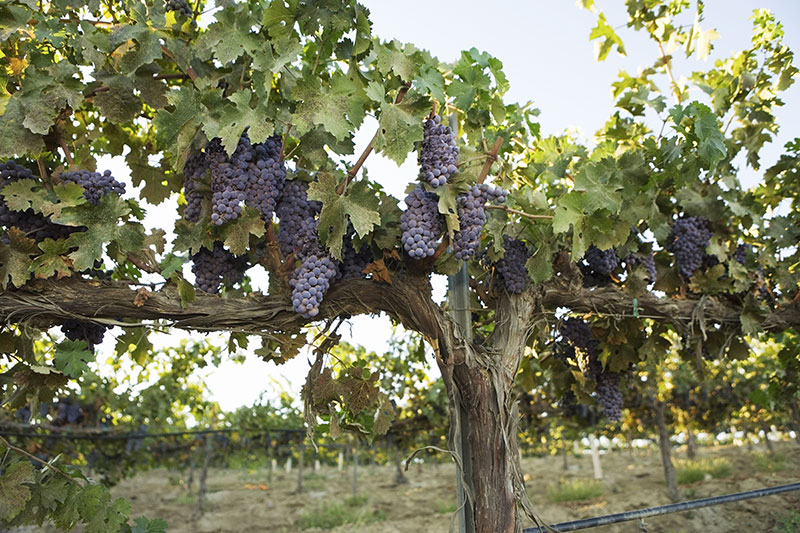 Drought-tolerant crops include some of the most storied foodstuffs in Western culture, such as grapes and pomegranates – the Garden of Eden was purportedly somewhere in the drylands of the Middle East, after all. Others are common garden plants that just happen to have the genetic makeup that allows them to grow with or without irrigation – dry-farmed tomatoes are a hot item among chefs, even though most of us water them weekly. Some plants that we might consider weeds – purslane and burdock, for example – count extreme drought tolerance as part of their tough-as-nails character, and happen to be delicious.

From the most obscure, thorn-laden desert crops to everyday species you likely have growing in your backyard already, there are plenty of drought tolerant edibles to choose from. And in my experience, edibles that thrive in dry soil also thrive when joined together on the palate. You might say they are of the same parched, but flavor-rich, terroir. 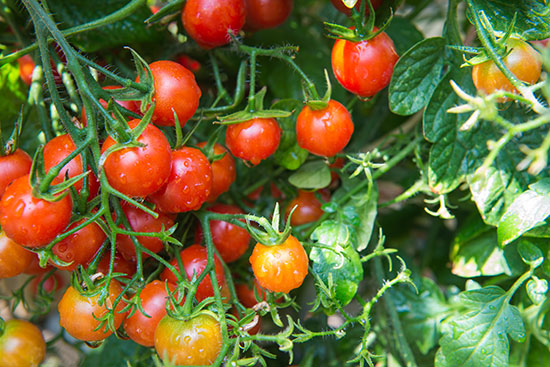 One of the secrets to growing really flavorful tomatoes is to go easy on the irrigation – “watered-down” tomato flavor is literally the result of excess soil moisture (which also contributes to fungal diseases). But some tomatoes are more drought tolerant than others. Those famous dry-farmed tomatoes are typically a variety called Early Girl, though Brandywine, Black Krim, and most any variety of cherry tomato will work. If there is no rain during the first month after planting, you will need to water about every 10 days. But after that you can forget about irrigation. The vines will eventually shrivel, but the fruit will still ripen – with a flavor that is unsurpassed. For non-dry farmed tomato varieties, like Cherokee Purple or Beefsteak, irrigation is required during dry periods, but to the tune of every week or two, not every day or two (once the vines have become established, that is). 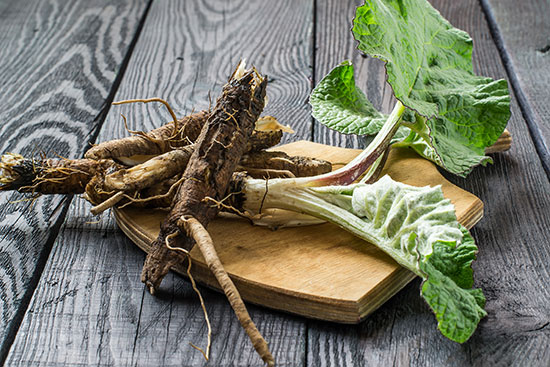 Most people have no idea that this common roadside weed, which seems to prefer the harshest, driest conditions, is actually a gourmet root vegetable. The Japanese call burdock gobo and use it in stir-fries. You won’t need a drop of irrigation to get this one established – just cast the seeds into any sunny patch of bare earth and let nature do the rest. Burdock is a biennial, meaning it sends up a flower stalk and seed head in the second year after sprouting, but the root is tough by the end of year two, so be sure to harvest it in the first fall after sowing. The giant taproots grow up to 3 feet long, but just dig up as much as you can and enjoy. 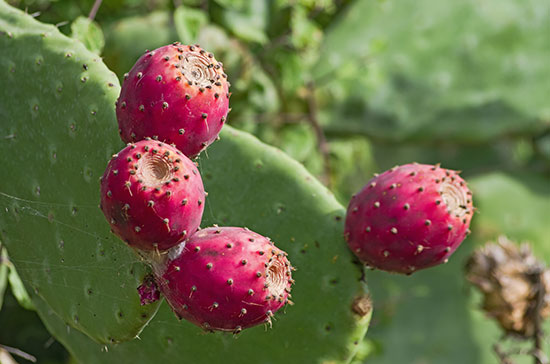 Also known as tunas in Mexican markets, this watermelon-colored fruit has a thirst-quenching tropical flavor, excellent for eating out of hand or for flavoring a drink. The cactus pads, called nopales, are also edible, and give a tangy taste and gooey, okra-like texture to soups and stir-fries. Diced nopales are a common vegetable in a variety of traditional Mexican dishes. Growing your own prickly pear cactus is as easy as slicing a pad off a living plant and tossing it out in the yard. As long as it comes into contact with a sunny patch of soil, the pad will sprout roots and grow into a mature cactus in a few year’s time. No irrigation needed. Surprisingly, prickly pear cactus is one of the few cacti that grow exceedingly well outside of the desert, even in cold, wet climates. They just need-well drained soil. Look for a spineless variety to make harvesting easier. 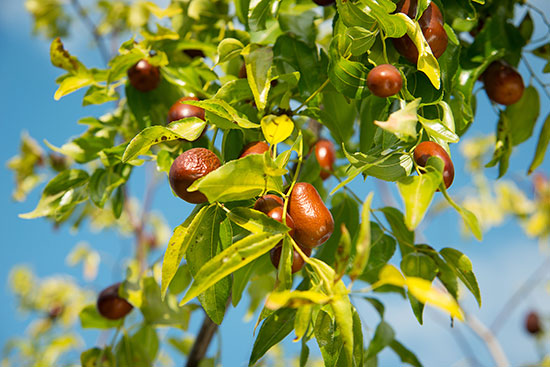 You’ve heard of the candy, this is the fruit that inspired it. Jujubes originated in the Middle East and spread into Asia where they were domesticated in ancient times. You won’t find them in the produce aisle, but plenty of mail-order nurseries supply the trees. They are also known as Chinese dates, an apt synonym given their chewy texture when dried. When fresh they resemble a crisp, non-juicy apple. Jujubes are a beautiful, long-lived tree, which appreciates occasional irrigation in its first year, after which water is only required to keep it alive in times of extreme drought. 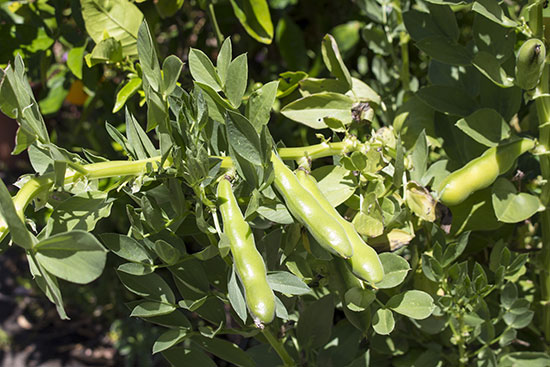 Fava beans, also known as broad beans, are a worthy one-off on a list of drought tolerant crops as they are more like drought-evaders: They are the rare bean that grow in very cool weather, negating the need for irrigation. In mild climates like California and the deep South they are planted in fall and harvested in early spring, surviving on the moisture held in the cool soil through the winter. In colder climates, plant fava bean seeds as soon as the soil thaws in late winter – the plants will survive a random cold snap down to at least 15°F, and should be ready to harvest before the soil becomes bone dry in late spring. 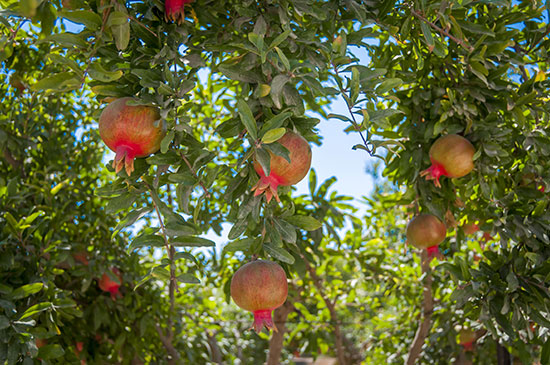 This scrappy Middle Eastern shrub is one of the most biblical of fruits. It is cited many times in Scripture, and some historians suggest that it was actually a pomegranate that tempted Adam and Eve, not an apple. Growing up to 12 feet tall and wide, pomegranate bushes have lipstick-red two-inch tubular flowers in late spring, followed by fruit that ripens to crimson perfection in autumn. More accurately described as drought resistant than drought tolerant, pomegranates appreciate a good soaking every six weeks to encourage heavy fruiting, especially on young specimens, though they can survive on less frequent irrigation. It’s best to withhold water in fall, however, as the ripening fruit will literally burst from taking in too much moisture and then rot.

Grapes – Zones Vary Depending on Variety

Grapes are similar to pomegranates in that they need modest irrigation to get established, but once their roots are anchored deeply in the soil the vines will thrive and produce abundantly for a century or more. Dry farming wine grapes is standard practice in many traditional wine-producing regions, an approach known for bringing out the complex flavors of the fruit (Á  la dry farmed tomatoes). While the majority of grape varieties are drought tolerant, those native to eastern North America, like muscadines and Concord grapes, are less so. The Mediterranean species Vitis vinifera, which is native to regions with scant rainfall, or any grapevine denoted as a “French hybrid” is more reliably drought tolerant. 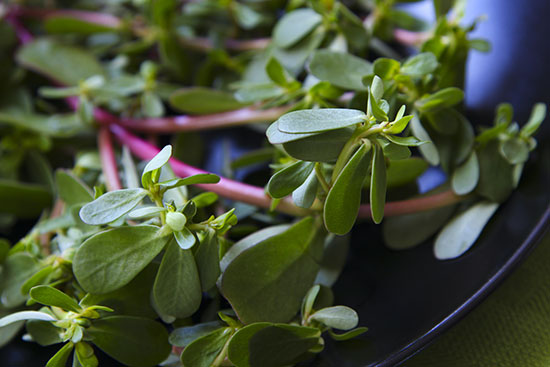 Not many salad greens can boast of drought tolerance. In fact, most grow poorly, if at all, in the heat of summer, the time of year in which purslane is at its prime. It has a crisp, succulent texture and zingy, lemon-esque flavor that makes a refreshing addition to summertime meals. Purslane often grows on its own as a weed, both in moist garden soil and dry, forlorn places, but there are also cultivated varieties bred for larger leaves and better flavor. 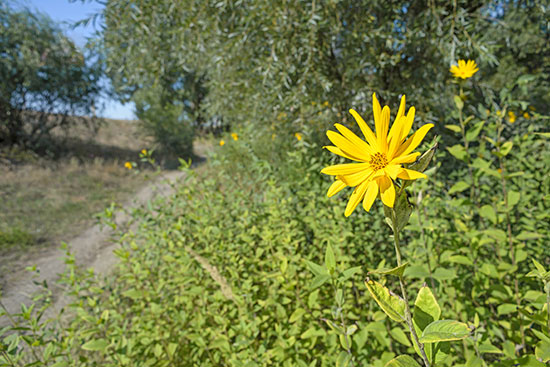 Also known as sunchoke, this root crop is a type of perennial sunflower native to much of North America. With bright yellow blossoms rising on head-high stalks above a bed of tasty tubers – the flavor is often described as a cross between artichokes and potatoes – sunchokes are the quintessential “edible ornamental.” Typically planted from mini-tubers, not seeds, the crop appreciates regular water in its first year, but thereafter grows into a dense patch that does not require supplemental irrigation except in times of extreme drought. 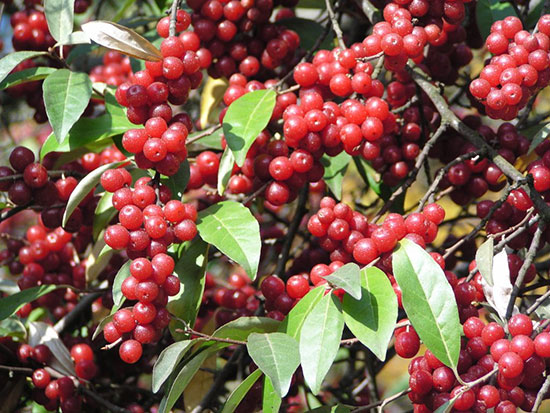 Blueberries, blackberries, raspberries, strawberries, and other juicy berries typically require ample irrigation. Goumi, an Asian shrub growing 6 to 8 feet tall and wide, is a rare berry that is truly drought tolerant. Also known as cherry silverberry or autumn olive, the half-inch fruits have a sweet-tart flavor and a soft seed inside that is typically swallowed with the fruit. Goumi grows like a weed, so much so that it is considered an invasive species and some areas, but that is primarily a problem with unnamed seedling varieties, which are sometimes sold as ornamental plants. If you stick with one of the named cultivars that have been bred for their fruit, invasiveness is typically not a problem.

I live in California’s upper desert (Joshua Tree) at 3,000 foot elevation. I have a spot on the south side of the house that I want to put in a raised garden bed just for a kitchen garden; nothing huge but the sun is so strong and it is so dry (15% humidity) and windy here, will that change the watering amount? Last year, everything dried out and died and I watered 3-4 times a week. I had a drip system put in so the remaining 2 grape vines and olive/fruit trees would survive. So far so good for those.… Read more »

Popular
Is Agroforestry the Key to Hardier Row Crops?Shea Swenson
7 Smokable Plants You Can Grow That Aren’t MarijuanaBrian Barth
Goat Sex: Everything You Wanted to Know But Were Afraid to AskAndrew Amelinckx
Why Don’t We Eat Turkey Eggs?Dan Nosowitz
6 Differences Between Llamas and AlpacasAndrew Amelinckx
Explore Modern Farmer
Related
Environment, Food Waste, Labor, Meat
Is There Such Thing as Good Meat?Emily Baron Cadloff
Environment, Plants
Is Agroforestry the Key to Hardier Row Crops?Shea Swenson
Environment, Food & Drink
Where Has All the Mustard Gone?Chloe Faure
Animals, Environment, Health
To Stop New Viruses Infecting Humans, We Must Protect Bat HabitatAlison Peel, Peggy Eby, Raina Plowright
wpDiscuz
We use cookies on our website to give you the most relevant experience by remembering your preferences and repeat visits. By clicking “Accept”, you consent to the use of ALL the cookies.
Cookie settings ACCEPT
Privacy & Cookies Policy