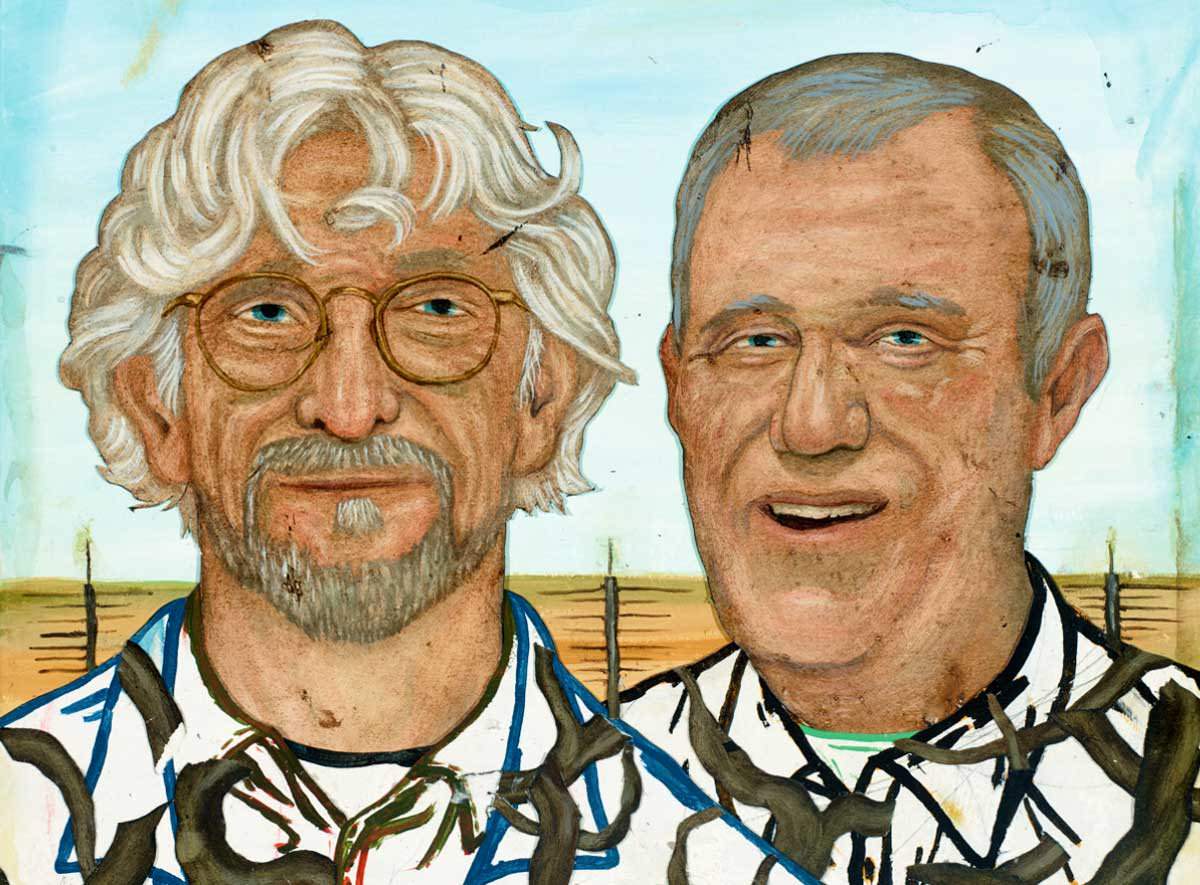 Paul, who owns Cameron Winery, and Raney, the founder of nearby Evesham Wood, practice what’s known as dry farming – they rely on natural precipitation alone for their vines. By 2004, the two had become so troubled by the ongoing irrigation trend that they founded the Deep Roots Coalition to challenge it. (The roots of nonirrigated vines tend to sink deeper into the soil in search of moisture and minerals.) Environmental concerns were a motivating factor, one made more prescient by the fact that more than half of Oregon’s counties are currently under a state of drought emergency. But the primary reason Paul and Raney began promoting dry farming came down to matters of taste. They wanted to encourage others to create complex wines that reflect the soil from which they come.

Growing wine grapes without irrigation is less radical than you might think. France, Italy, Germany, and Spain have been dry farming for centuries. The European wine industry doesn’t just frown upon the supplementation of rainfall; it forbids the practice (with a few exceptions; most European countries permit irrigation for newly planted vines, and some have begun loosening regulations in the case of drought). Water mature vines in France, for instance, and you may find your appellation d’origine contrÁ´lée, the industry’s all-important certification of place, revoked. Adding unnatural quantities of water, the thinking goes, means meddling with a wine’s terroir, its unique expression of place. Even in California, grape growers relied on rain alone until the 1970s, when drip irrigation was introduced to the state. The grapes responsible for establishing Napa Valley as a world-class wine region in the middle of that decade – from brands like Stags’ Leap and Chateau Montelena – all came from dry-farmed vineyards.

Growing wine grapes without irrigation is less radical than you might think. France, Italy, Germany, and Spain have been dry farming for centuries.

Over the years, however, commerce eclipsed custom. Irrigating vines, American farmers found, invariably increased yields. And more grapes per acre meant more profits per acre. (Once the connection with yield had been established, many U.S. banks began refusing loans to vineyards that didn’t promise to irrigate.) Today, the majority of California wineries irrigate their vineyards even in years, and areas, with plentiful rainfall.

Paul and Raney believe that irrigation has a profound impact on flavor. “If you give a vine a bunch of water,” says Paul, who did post-doctoral work in plant physiology, “it gets more stomata on the bottom of the leaves. The result is fruit that tends to have more sugar.” This is why, he explains, the alcohol levels in wine have climbed steadily over the past 30 years. Today, most Oregon wines clock in at 14 percent alcohol or higher. (Paul’s wines average about 12.5.) Not incidentally, those richer, riper, high-alcohol wines are beloved by Robert Parker and other influential wine critics. “Essentially, the character of Napa wines has changed to accommodate irrigated grapes,” says John Williams, the winemaker at Frog’s Leap Vineyard, in Rutherford, California. “The Brix [sugar level] used to be 22 to 23,” adds Williams, who has been dry farming since 1989. “Suddenly it became 24, 25, 26. Many people like that style,” he adds, “including the major wine critics. But to me, they’re undrinkable.”

“If you go to a Deep Roots Coalition tasting,” says Tyson Crowley, the Willamette winemaker who serves as president of the organization, “all the wines taste different. The best wines come out of that dry-farming paradigm, because people aren’t altering the grapes’ basic nature. You get amazing expression, where a vintage stands out and the soil stands out and the site stands out.” 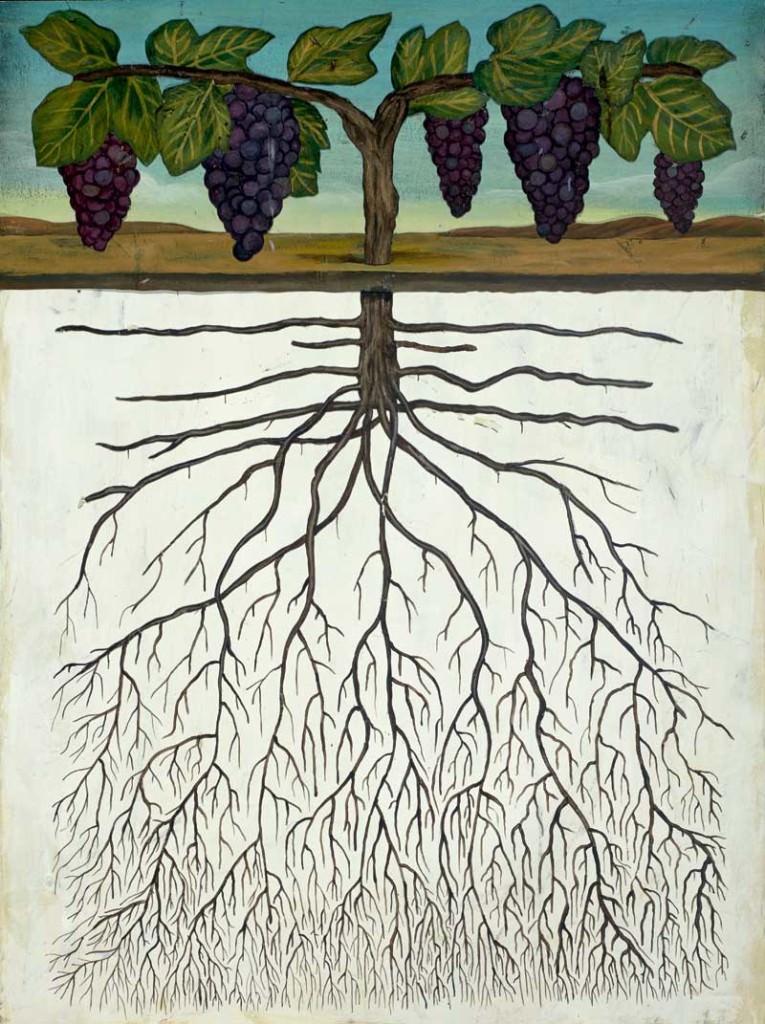 But recognizing the merits of dry farming and actually practicing it are two different things. Farmers can’t simply turn off the tap overnight. Location matters, as do soil and root-stock. When California’s wine industry first became established, for instance, most of the state was planted with two drought-resistant grape varieties. In the mid-’90s, after an epidemic of the microscopic pest phylloxera devastated vineyards in the northern part of the state, many winemakers replanted with a phylloxera-resistant riparian root-stock, which requires a lot of water.

“It’s terrible for dry farming,” says Steve Matthiasson, a Napa winemaker who in 2006 planted his vineyard with just such stock. “I would totally do things differently if I had it to do over again.” Matthiasson is dedicated to sustainability – he farms organically and follows a no-till regime to prevent erosion and sequester carbon. But tearing everything up with a tractor and replacing his current rootstock with a drought-tolerant type, he says, would be anything but earth-friendly. “Talk about carbon footprint!”

The ongoing drought in the nation’s west is serving as a different sort of evangelist: Water-restriction laws are pushing winemakers to farm drier whether they want to or not.

Instead, Matthiasson practices “regulated-deficit irrigation.” He uses a probe to measure the moisture in his fields and irrigates only if absolutely necessary. When he does turn on the water, he keeps it going a full 24 hours, so it penetrates all the way down to the roots. Yet the winemaker says his yield remains the same: around five tons per acre on an average of just 7,200 gallons of water. “Wine grapes grow all over the world with less rain than we’ve gotten this year,” says Williams of Frog’s Leap. (See “Turning Water into Wine,” below.) For his Napa vineyard, Williams chose rootstock well-suited to dry farming, including ‘St. George,’ which tolerates both phylloxera and drought. Though ‘St. George’ is known for low yields, Williams reaps 4 to 4.5 tons of grapes per acre.

As concerns over climate change increase, more winemakers are looking into the merits of dry farming grapes. Today the Deep Roots Coalition counts 26 winemaking brands among its members, and the group regularly hosts dinners, tastings, and other events as a way to educate their peers and the public. Meanwhile, the ongoing drought in the nation’s west is serving as a different sort of evangelist: Water-restriction laws in places like southern Napa are pushing winemakers to farm drier whether they want to or not. As with grazing cattle and farming organically, it seems that when it comes to wine-making, what’s old is new all over again.

Just how much water does it take to produce quality wine? Opinions vary. Spain’s La Rioja province, for instance, has historically received an average of only 16 inches of rain a year. And as in other Old World wine regions – Bordeaux and Tuscany included – irrigation of vineyards older than a few years is prohibited (with special dispensations in cases of extreme drought). Though New World wine regions receive more rain (even amid today’s drought, California’s Napa Valley registered 20.7 inches by press time), most American vineyards irrigate nonetheless. Sources: United States – National Oceanic and Atmospheric Administration, based on 30-year averages; Europe – World Meteorological Organization, based on 30- and 50-year averages. 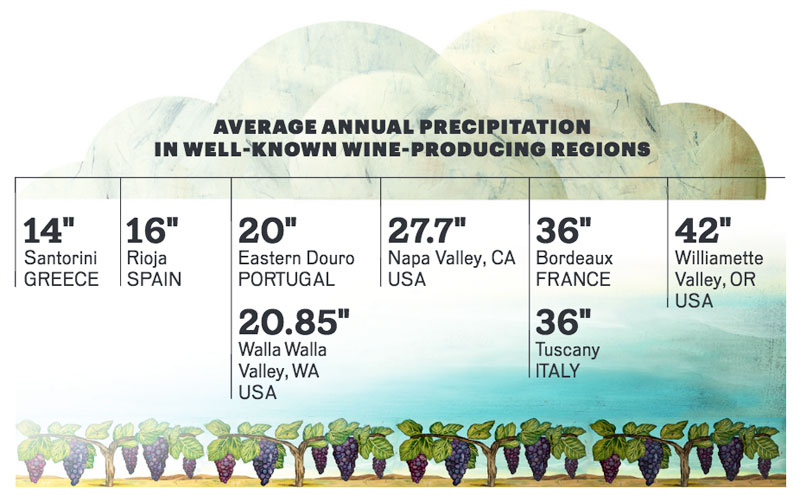 Hannah Wallace is a Portland-based writer who contributes to Vogue, Civil Eats, and Portland Monthly.

[…] bring these ancient practices in farming and food back into the news today, and trendsetters like Modern Farmer and Bon Appétit are running stories that feature gorgeous imagery that irresistibly draws […]