And why the infamous "guest” worker program is such fertile ground for fraud and abuse.

While the loss of those workers would seemingly spell disaster for the food system, proponents of tightening the border often argue that the agricultural labor supply would simply shift to legal immigrant workers who go through the proper channels to obtain a visa. However, the process of obtaining an H-2A Temporary Agricultural Worker Visa – the only legal option for foreign workers to come to the U.S. for the purposes of farm work – is extraordinarily complex.

An out of work Mexican villager can’t simply sign up and hop the next bus for California – the process must be initiated by an American employer. For employers, the process is a bureaucratic nightmare involving an ongoing slog of paperwork and fees. For workers, the process is ripe for exploitation. The H-2A program has famously been referred to as a modern form of indentured servitude: “the closest thing I’ve ever seen to [modern] slavery,” said former congressman Charles Rangel.

Presumably, if the program were a viable option for agricultural employers, it would be more widely used. Requests for H-2A visas are almost always approved by the Department of Labor (the rate is usually around 90 to 95 percent), and there is no cap on the number of H-2A visas issued annually (as is the case with other types of work visas), yet only about 60,000 to 80,000 H-2A visas are issued each year, accounting for around 3 percent of the 2.5 million farm workers in the country.

Here’s how the program works – and a few reasons why in reality, it often doesn’t “work” for employers nor employees. 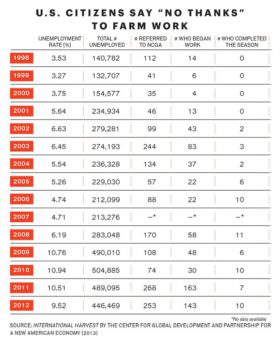 That argument that immigrants are stealing our jobs? Not so fast. A 2013 study by the Center for Global Development, an independent Washington, D.C., think tank, analyzed 15 years’ worth of data from the North Carolina Division of Employment Security (which manages the state’s unemployment offices) and the North Carolina Growers Association (which recruits workers for hundreds of area farms). The findings compare the number of unemployed citizens with those who accepted referrals for available NCGA farm jobs, those who showed up for the first day of work, and those who completed the season on a farm: none in 1998 through 2001 and only 11 in 2008, 0.004 percent of all 283,048 job seekers that year. See “The High Cost of Cheap Labor” for more.

In theory, the right to hire foreign workers is bestowed on an employer only after they’ve made a concerted effort to recruit a suitable local workforce, such as through advertising online and in local newspapers. In practice, state and federal authorities have limited means to evaluate just how thoroughly employers are seeking to hire from the local labor pool.

There are several administrative components involved in step one, outlined below, which must be initiated about 10 weeks before the date workers will be needed. This itself presents an enormous problem: most crops are picked during a very small window of ripeness, and it’s nearly impossible to predict how weather and other factors may delay or speed up the harvest date.

Employers must pay a fee and submit extensive information about their hiring history and current labor needs with each of the following forms. Most hire a labor contractor or attorney to take care of the cumbersome paperwork (the Department of Labor “user guide” for Form 9142 alone is 29 pages of legalese), a process that must be repeated each year since H2-A visas are exclusively for temporary workers – 12 months is the maximum duration of employment.

This part is carried out primarily by foreign labor agencies. While workers from 63 nations are eligible for H-2A visas, 94 percent are issued to citizens of Mexico. Both U.S. and Mexican law prohibit labor agencies from charging prospective workers for access to a visa – the U.S. employer is supposed to pay these contractors for their recruitment efforts. But there is virtually no enforcement of the rule, so workers are routinely charged recruitment fees, often under the guise of “visa payments” and other charges that recruiters claim are necessary to broker the deal with an employer.

According to a survey of 220 H-2 workers (which includes H-2B non-agricultural workers) by the Centro de los Derechos del Migrante, a binational worker advocacy organization, 58 percent paid a recruitment fee, averaging $590 each. Most recruiters offer a variety of other services to prospective employees, such as help with submitting the required paperwork to U.S officials and transportation to the job site, which U.S. law allows them to collect payment for – the employer, however, is supposed to reimburse their workers upon arrival.

The problem is that these rights are often not spelled out by the recruitment agency or employer, leaving workers vulnerable to exploitation and outright fraud. The Centro de los Derechos del Migrante survey found that 52 percent of H-2 workers surveyed were never shown their work contracts, and 10 percent reported having payed a fee for a job offer that did not exist. 47 percent of workers had to take out a loan to cover these various pre-employment expenses, often provided at high interest rates (the group documented rates as high as 79 percent) directly from the recruiter, with the expectation of being paid back from the wages earned while working in the U.S.

Administrative components of step two include:

Step 3: Carry out the Labor Contract

Farmers in the H-2A program are bound to a number of requirements by their contracts with foreign workers, though as the Farmworker Justice organization has documented, agricultural employers routinely manipulate the system to their advantage. The basic requirements include:

Workers are bound by a number of restrictions while in the country. They cannot seek other employment, for example, making them unlikely to complain about poor treatment and exploitive practices. If they are fired or choose to leave prior to completing their work contract, they must return immediately to their home country, or face deportation. Workers’ spouses and children may accompany them to the U.S., though their spouses are not eligible to work, and the employer is not obligated to provide housing or transportation to the family.

Employers may choose to renew H-2A visas in maximum 12-month increments for a period of up to 3 years (going through much of the application process again each time), but afterwards the worker must return to their home country for at least 3 months before they are eligible to obtain another H-2A visa. In no circumstances is an H-2A visa considered a stepping stone to a Green Card or to citizenship.

I just irk on H2A visa. Before I came to America I did apply for a few jobs. One of them come back and offer me a good opportunity. Am I allowed to move?
If yes How?

Let me get this straight, because of the potential for fraud by US employers, instead of petitioning for foreign workers using the H-2A visa, you would rather continue to exploit them and subject them to high rates of fraud using well-establisjed methods, but without having to do any additional paperwork? Wouldnt it be more honest of US employers to: 1) insist USCIS communicate to the workers their rights and provide workers an agency contact to answer any questions that arise until the end of their contract, 2) verify with the workers directly that the visa and all associated costs were… Read more »

I need u.s.a visa because I planning a modern agriculture with my 4 year integrated course of b.s.c(hons) agriculture experience

I need u.s.a visa because I planning a modern agriculture with my 4 year integrated course of b.s.c(hons) agriculture experience