Do you know your cushaw from your kabocha? Your butternut from your buttercup? We're here to help. 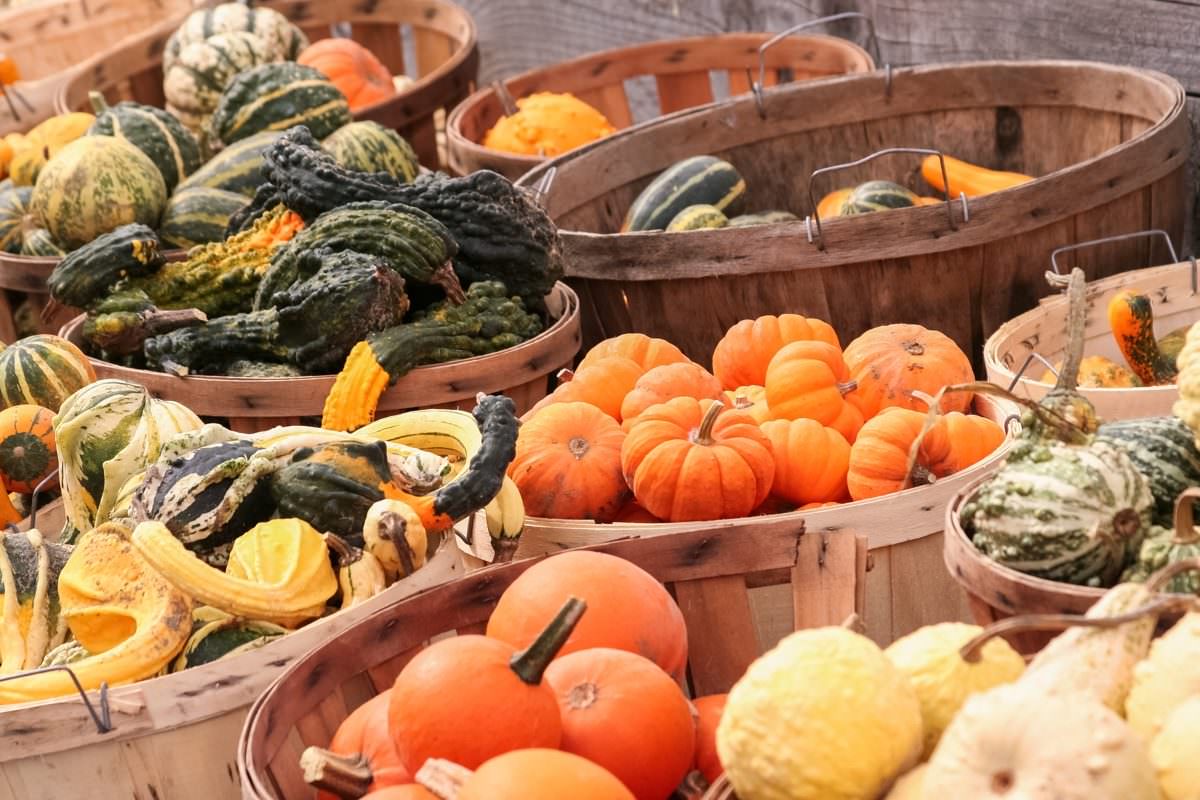 Summer is a time of light, fresh, mild, delicate squash. But the calendar now says November – nights are getting longer and the squash available at our farmers markets are getting bigger, tougher, sweeter, and stronger. Interestingly, winter squash belongs to the same three or four species as summer squash, but there’s a key difference: Summer squash varieties are grown to be picked while still immature – that’s when they taste best – while winter squash are tastiest as full, robust, mature fruit. (Yes, fruit: all squash are fruits. Technically they are a type of berry known as a “pepo,” a distinction that is not very useful outside biology classes and possibly the television quiz show Jeopardy!.)

There are three major species you have to know: Cucurbita maxima, Cucurbita pepo, and Cucurbita moschata. Very broadly speaking, C. maxima tends to be the biggest, C. pepo tends to be the lightest and most delicate, and C. moschata tends to be the sweetest. However, there are hundreds of different varieties of winter squash and it’s hard to generalize about them. Just for example, there are squash commonly called “pumpkins” in all three species. There’s a lot going on!

Anyway, we’ve collected some of the most common varieties as well as some of the more unusual ones that you should immediately snag should you see them available. Squash on! 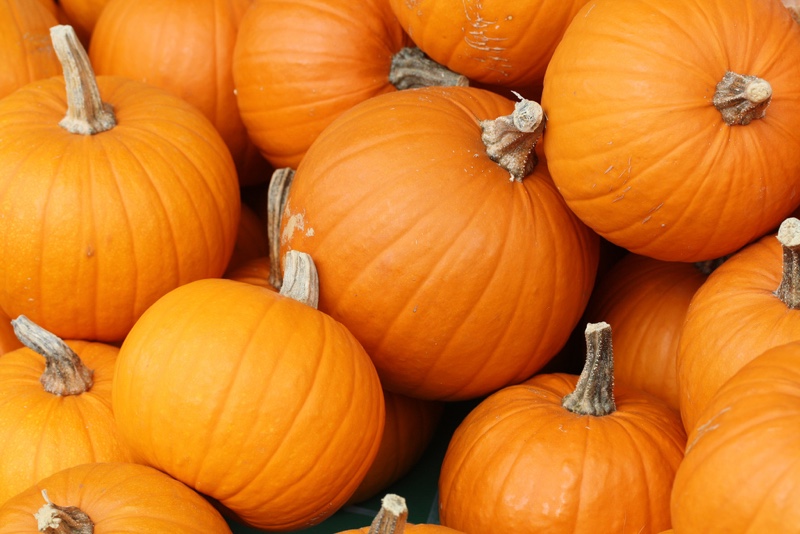 Sugar pumpkins are members of C. pepo, and can come in a variety of colors, but generally are smooth-ish, round, thin-skinned, and medium-sized. You don’t want to bother with a sugar pumpkin that’s bigger than about 10 pounds; they are usually less sweet. The sugar pumpkin is a good all-around winter squash; not too sweet, not too dry. As such it’s a good comparison for other squash. 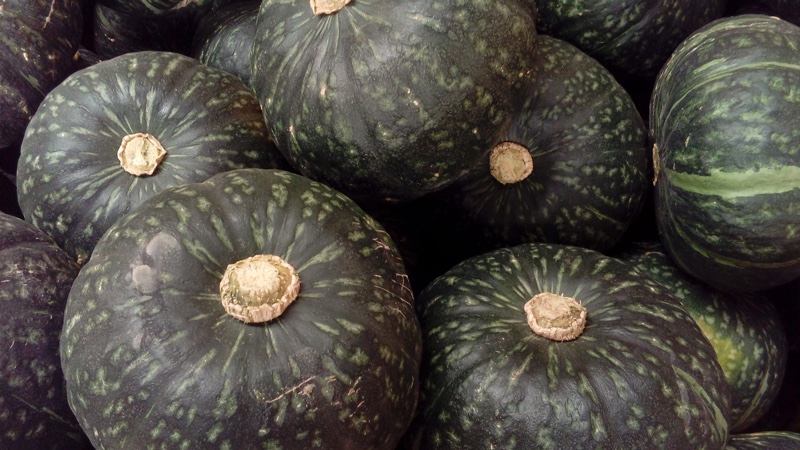 Winter squash is very popular in Japan, and though there are dozens of heirloom varieties originating from the country, their most successful export is the kabocha. Sometimes called the Japanese pumpkin, the kabocha is more squat than a sugar pumpkin, usually either dark green or a bright orangey-red on the exterior, and has a vibrant, yellow-orange flesh. It is one of the sweetest winter squash varieties, but also a bit crumbly and dry. 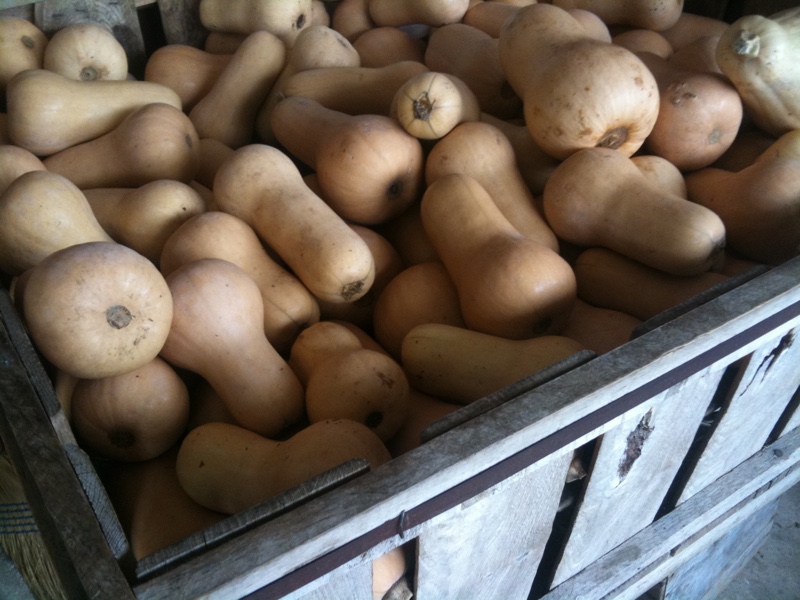 This is another pretty middle-of-the-road squash, and that isn’t necessarily a bad thing. Like the sugar pumpkin, the butternut squash is reliably sweet without being as sugary as some other varieties, is thin-skinned, and is also fairly easy to work with. As with most winter squash, go for the smaller ones, which tend to be sweeter and more flavorful. 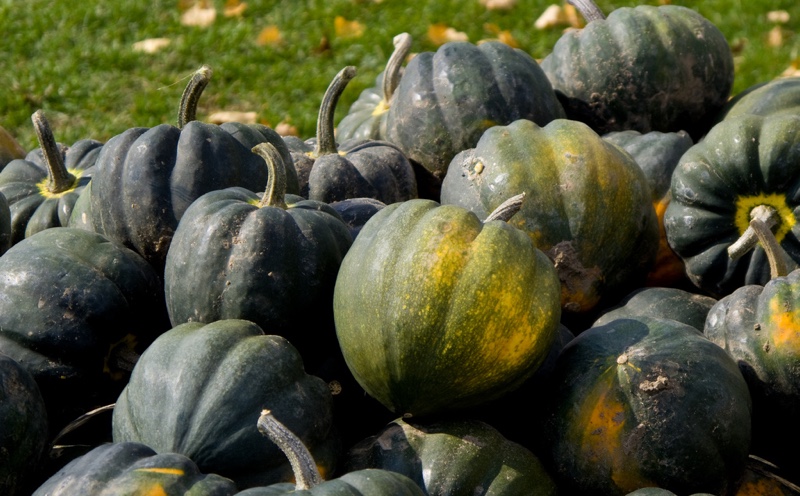 This C. pepo is a much less sweet variety; it tends to be a little on the dry side, and a bit more savory and nutty than the sugar pumpkin. The texture is more fibrous than the sugar pumpkin or butternut squash, and there’s also a lower squash-to-guts ratio than most winter squash, meaning that there’s not as much edible flesh – once you scoop out the seeds, you’re left with what is more like a big bowl. This makes it ideal for stuffing. 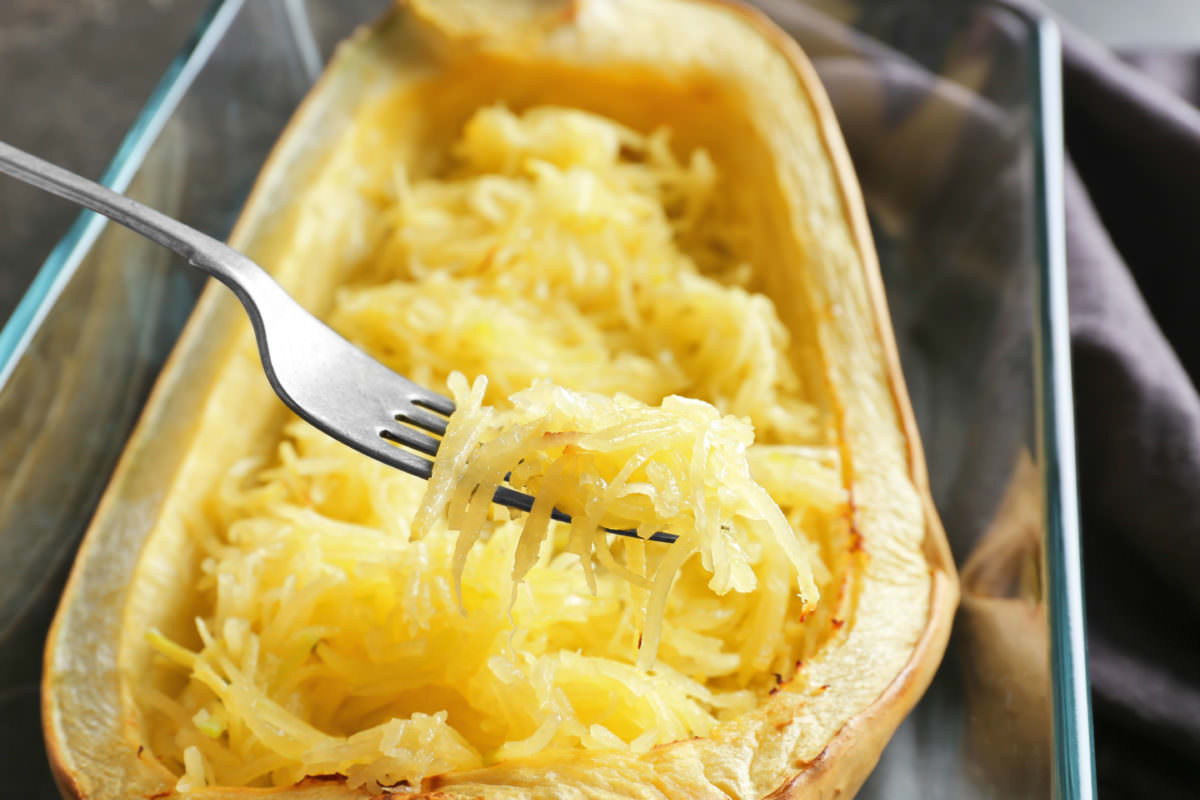 Easily the weirdest squash on this list, despite its ubiquity. Seriously, sometimes people forget how weird this squash is. The spaghetti squash, when cooked, separates into noodle-like strands. It’s mild and delicate, and also has a very low sugar content compared with other winter squash. 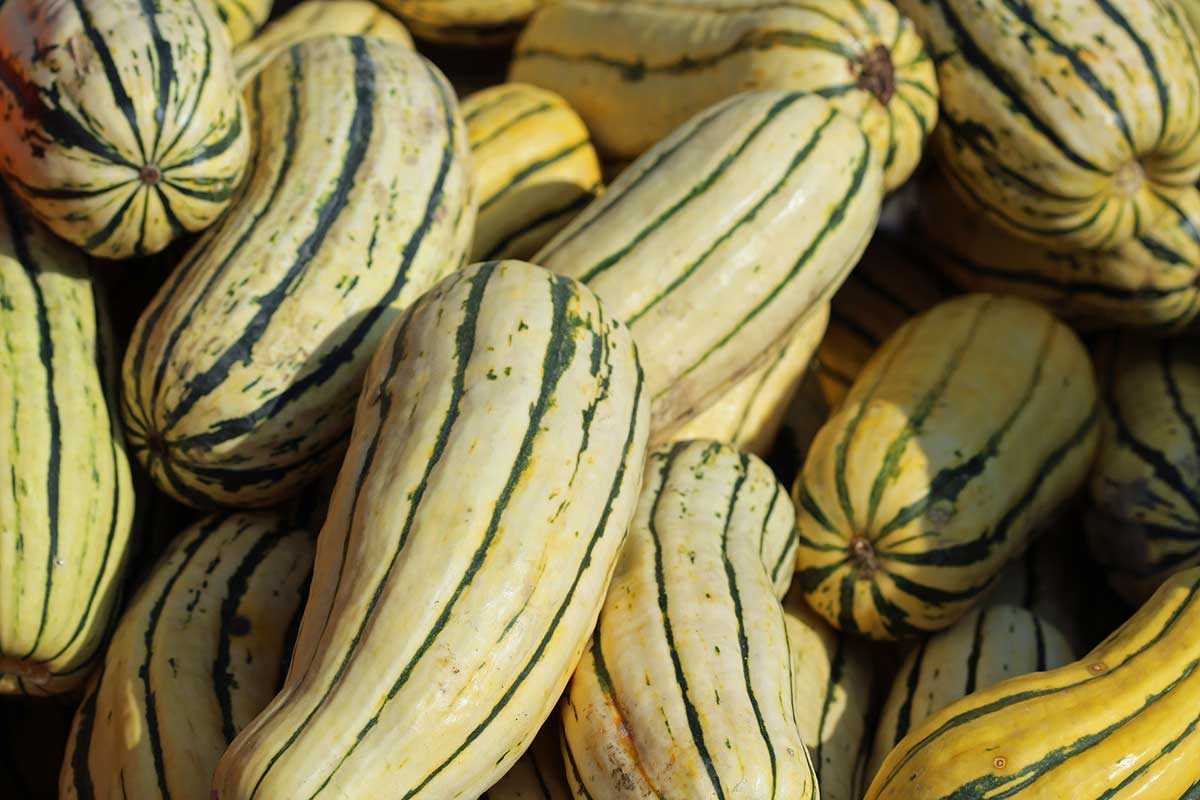 Another weird one. The delicata feels halfway between a summer and winter squash. Though many winter squash have a tendency to be sort of dry and pasty, the delicata is very moist, which makes it ideal for simply serving raw, sliced very thin raw. (All winter squash are edible raw. At their best, they have the crunch and rich flavor of a carrot. At their worst they’re floppy and gross.) 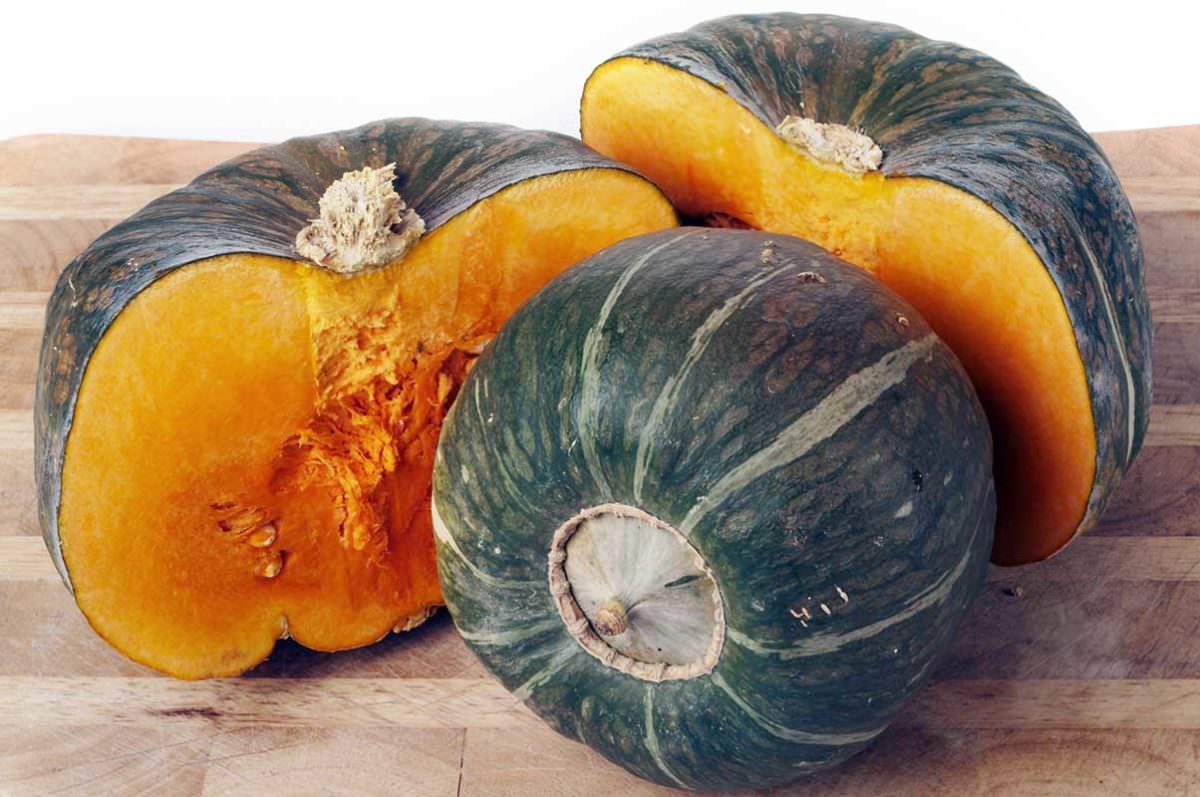 The buttercup, member of C. maxima, is sort of a parent variety; many other common squash, including some on this list, derive from it. Typically it is dark green, with a flat top. The flesh is a deep, bright orange. It tastes very similar to the kabocha: quite sweet, a bit dry. 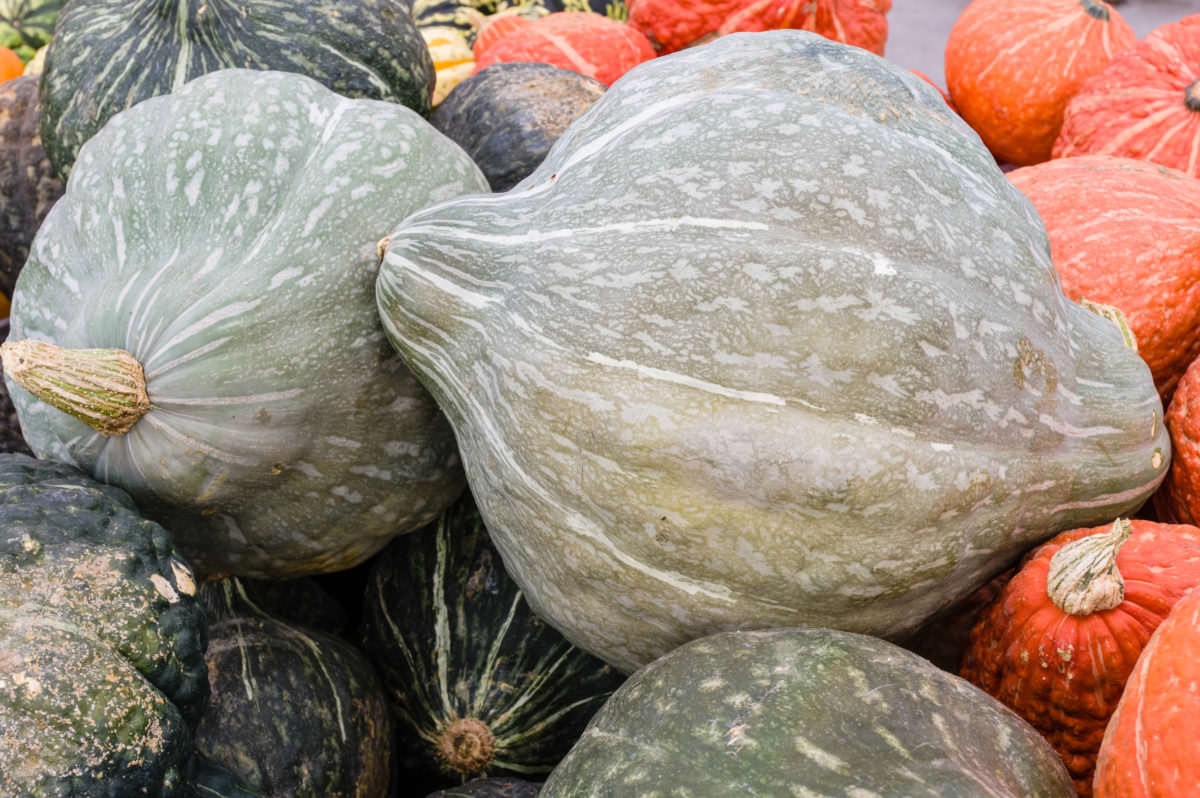 Another C. maxima, Hubbards get huge, and are sometimes sold in pieces because no sensible human can eat, like, 40 pounds of squash. They are usually pointy on top with a sort of teardrop shape, and can be light to dark green or reddish-orange, with a very thick and tough skin. Flavor? Like most C. maxima, they’re heavy, sweet, and dry. 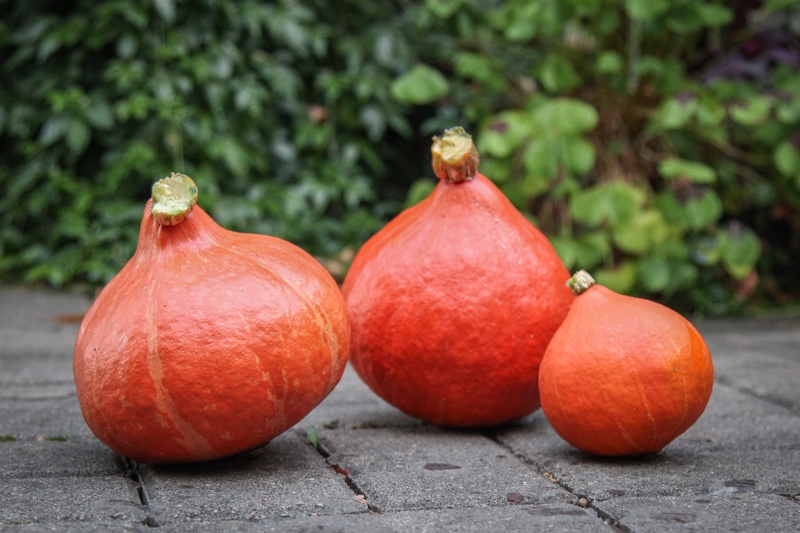 A derivation of hubbard, but better: kuri (sometimes called “red kuri”) is a smallish, teardrop-shaped red squash. The name comes from the Japanese word for “chestnut,” and it does, like the acorn squash, have sort of a nutty flavor. Since it’s usually picked while smaller than the regular Hubbard, it’s also usually tastier – not quite as dry and crumbly. 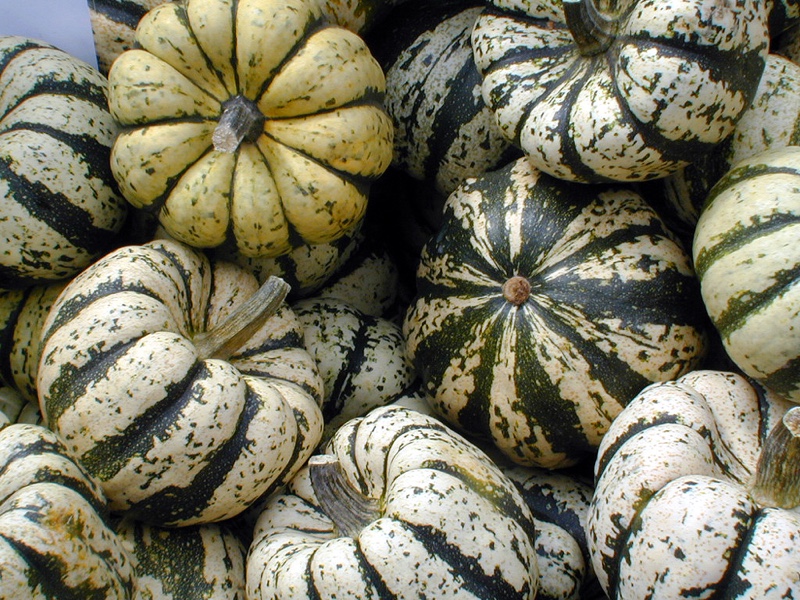 By Harald Bischoff (Own work) [CC BY-SA 3.0], via Wikimedia Commons

Back to C. pepo! At only about four or five inches across, the sweet dumpling squash is usually among the smaller winter squash you’ll find. It’s most often a creamy off-white, speckled with either green or yellow; it’s quite a pretty fruit. It is one of the absolute best winter squashes: not dry at all, nutty and flavorful and not too sweet. Definitely worth a try if you find them. 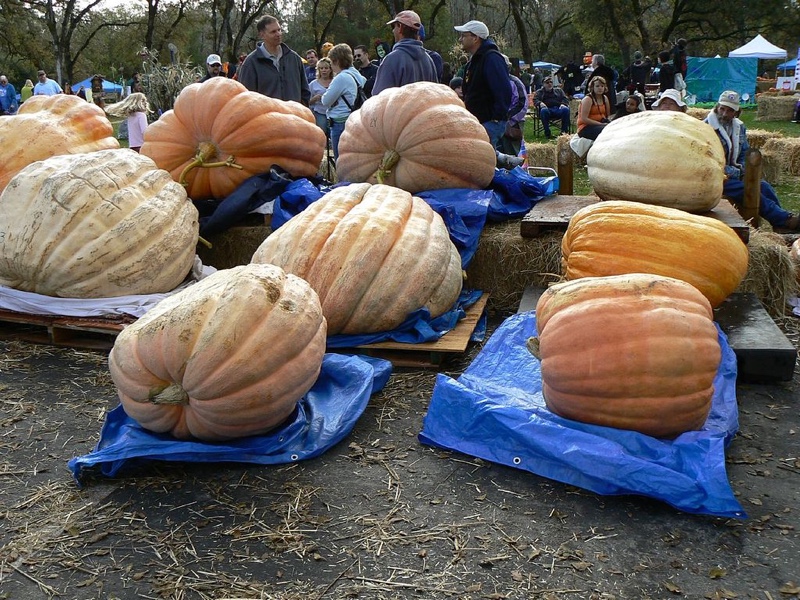 These are stupidly large pumpkins grown for competitions. They do not taste good and there is no real reason for you to buy them outside novelty. But they are fun to turn into a beer keg. 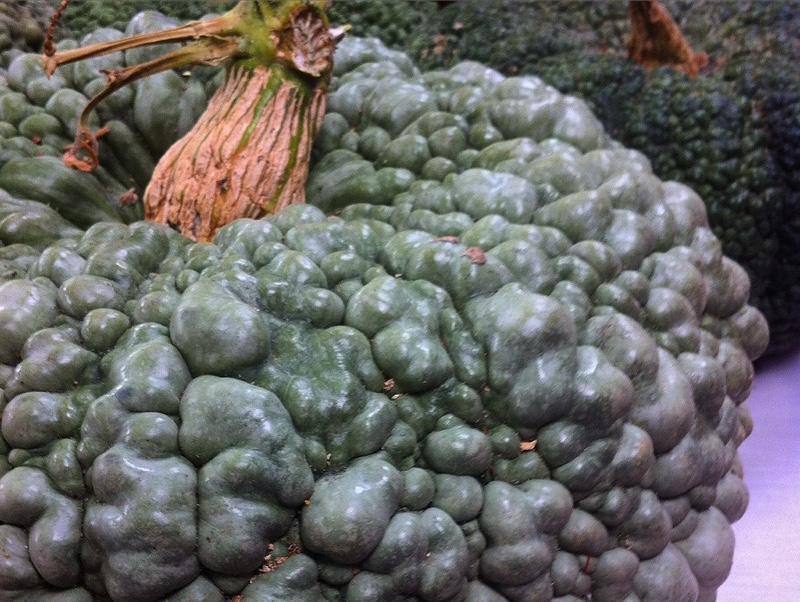 One of the coolest-looking winter squash varieties: usually pale green, always ribbed and completely covered in lumps. It is hard to prepare if you’re trying to peel it, but the guts-and-seeds center is comparatively small, so don’t worry about losing too much. The name means “tastes good from the oven.” The name is accurate. 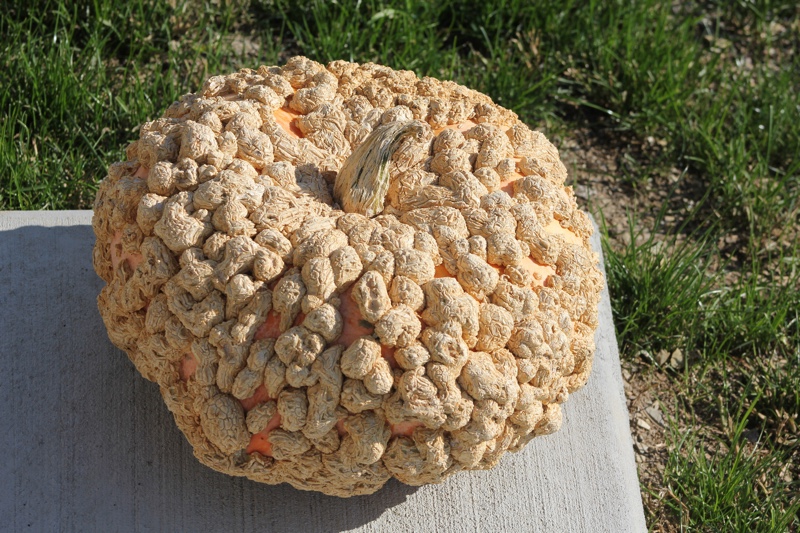 Named for the peanut-shell-like growths that cover the skin, the peanut pumpkin is one of the smartest purchases you can make this fall. If you buy one of these guys, everyone will know that you know your squash. The “peanuts” are actually the squash freaking out because it’s producing too much sugar; it squeezes the excess sugar out through the skin, causing those blobs. The more growths, the higher the sugar content. This is the best squash for anything sweet, including pumpkin pie. 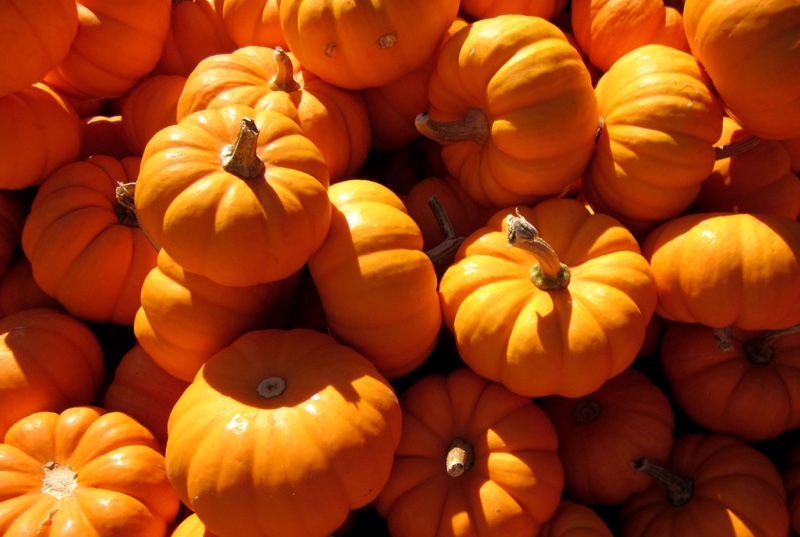 For children. Technically edible, but honestly why bother, they don’t taste notably good and the yield is terrible. 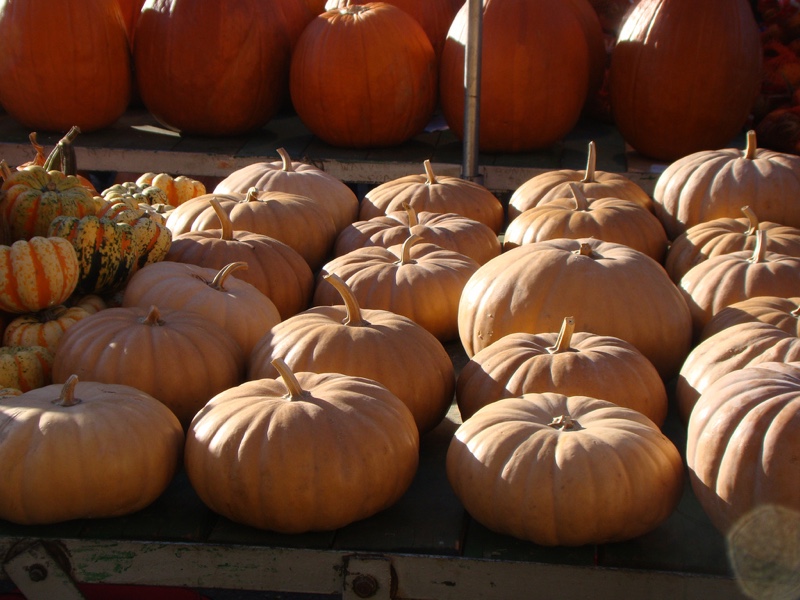 A specialty of Long Island, New York, the cheese pumpkin…does not taste like cheese. Bummer. It also doesn’t look like a wheel of cheese, even though that’s where the name comes from. It’s in the C. moschata family, along with butternut squash, and tastes basically the same. 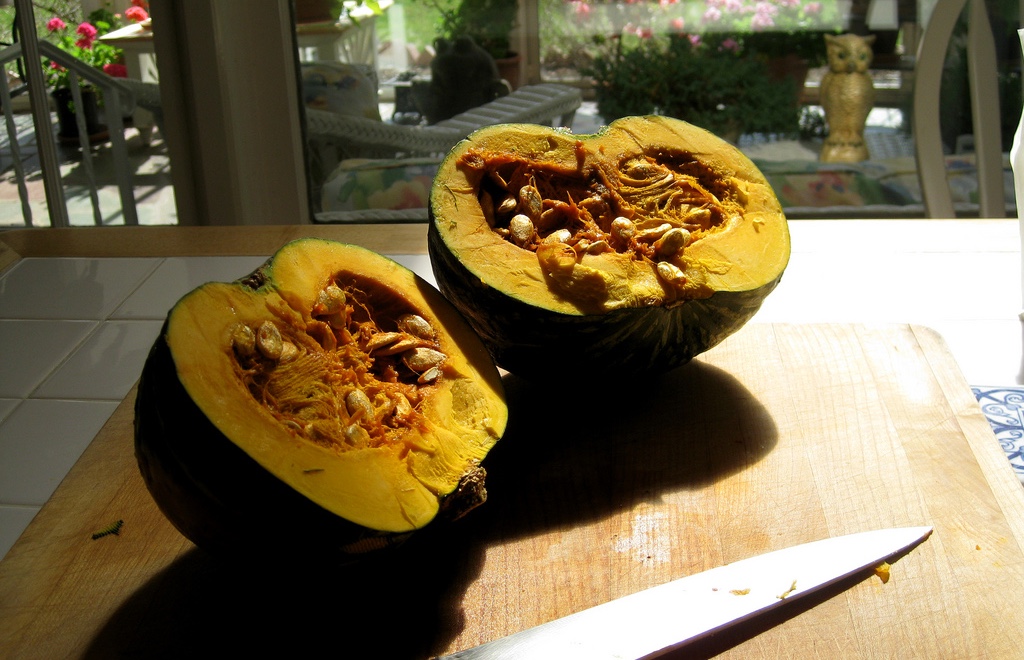 Commonly used in the Caribbean, especially in Jamaica, this squash is very similar to kabocha: dark green, quite large, and a bit squat, with an orangey-yellow flesh. It’s usually sold in pieces due to its large size, and it is moderately sweet. 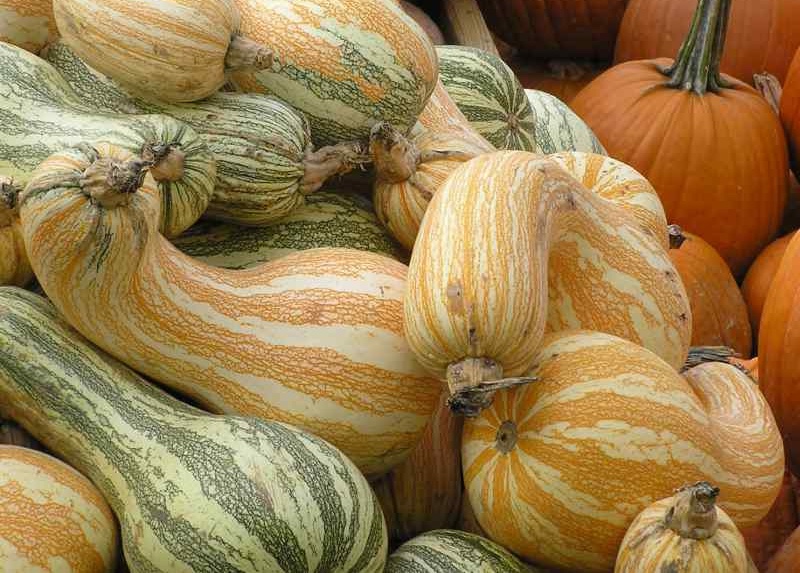 Ah, a strange one! Cushaw is not a C. pepo, C. maxima, or C. moschata. It is the only even slightly common member of Cucurbita argyrosperma, and not usually found outside North America. It’s crookneck in shape, like a butternut squash with a bent top, and it can be green, white, orange, or striped. Unlike most of the other squash on this list, the cushaw does not particularly love very cold weather; it is most commonly grown in warmer climates, like Mexico and the Southern United States. Similar to a delicata squash, the cushaw is mild and delicate, and is excellent raw.

I was enjoying reading this article untill I saw what you had to say about ‘Jack be little pumpkins’. I have to ask; Have you ever actually grown or tasted these squash for yourself or have you just read bits of info from the internet and automatically believed it true without any questions asked? If kept watered and grown in full sun, the fruit of ‘Jack be little’ is quite deliciously sweet and nutty. They aren’t as greedy as most squash varieties are and whoever told you that their yield is terrible ought to be shot. I grow these up… Read more »

Hello,
Do you have a good source for squash seeds? I would love to get ahold of a few of these. Especially the Cushaw, I have looked everywhere for seeds and can not find a reputable vendor. If you have any info for the Calabaza, Peanut, butter cup and cabocha, that would be super awesome.
Thanks so much! Happy growing!
Kate

Thanks for mentioning which squash varieties are dry, or supposed to be dry. I have been searching desperately for the original dry and mealy texture of the mature buttercup squash for the last decade or two. Every time I see one in the store it’s immature and disappointingly soggy. Or it’s an un-labelled hybrid falsely claiming to be buttercup but the wrong shape and some even seem to be part pumpkin in taste as well as staying wet even after baking cut open. Why did anyone get the notion that squashes should be wet?? The properly-matured Burgess buttercup had a… Read more »

Thank you for such an excellent explanation. This was exactly what I was looking for so again thanks!

Do you know anything about omo or umo squash?

Loved this, you’ve made it very entertaining to read as well as educational. I love squashes for their variety and weirdness!

Thank you for the useful hints and helpful list on selecting sweet tasting winter squash! I’m glad to find your newsletter!

I planted what it thought was yellow crook neck squash. What I have is a large fruit, at least a foot long and hard as rock. I have no idea what it is. Can you help? I can send a picture if you want