During the two decades Gilbert "Gilly” Pino spent as a railroad engineer in New Mexico, he ate the same lunch every day: a rotisserie chicken smothered in his mother's chile sauce. 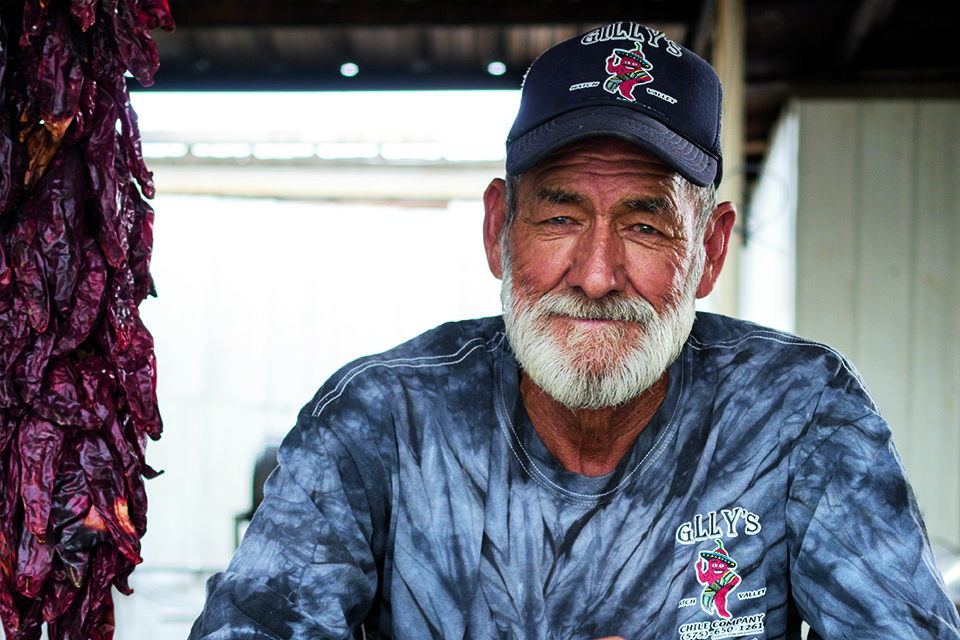 During the two decades Gilbert “Gilly” Pino spent as a railroad engineer in New Mexico, he ate the same lunch every day: a rotisserie chicken smothered in his mother’s chile sauce. “My cronies said, ‘Gilly, you’re in the wrong business,’” recalls Pino, now 68. “Eventually, I realized they were right.”

So in the 1980s, he began farming and selling peppers in Hatch, a town that’s become synonymous with chiles. Pino now grows two varieties behind his stand and sources another eight from area farms; then he dries and roasts the peppers, or turns them into salsas. But what sets Pino’s stand apart is the man himself, always offering up recipes, colorful stories, and strong opinions. (Visitors who admit to using supermarket chile powder are in for a lecture.)

Pino sells tens of thousands of pounds of chile peppers each year, and estimates that 95 percent of his business comes from repeat customers. “It’s a beautiful feeling, because I’m feeding their addiction. But it’s a good, legal addiction.”

I miss you Gilbert (Gilly) !

I have a little store in Prescott Arizona and I bought a lot of Chili Ristras from Diaz Farms about 200 yr. Diaz has closed. Can somebody please ask Gilly’s Fatm or Gilly Pino if I can buy from him? Thank you

Related
Opinion, Technology
Opinion: The Rise of Precision Agriculture Exposes Our Food System to New...Austin C. Doctor and George Grispos
Animals, Environment, Plants
Farmers’ Battle Against, and Now For, MilkweedJennifer Taylor
Opinion, Plants
Opinion: Community and School Gardens Don’t Magically Sprout Bountiful BenefitsMitchell McLarnon
Politics
Lawmakers Are Exploring Ways to Support Beginning FarmersShea Swenson
wpDiscuz
We use cookies on our website to give you the most relevant experience by remembering your preferences and repeat visits. By clicking “Accept”, you consent to the use of ALL the cookies.
Cookie settings ACCEPT
Privacy & Cookies Policy