Goat Sex: Everything You Wanted to Know But Were Afraid to Ask - Modern Farmer
Animals

Goat Sex: Everything You Wanted to Know But Were Afraid to Ask

It's the #GoatWeek piece we've all been waiting for. 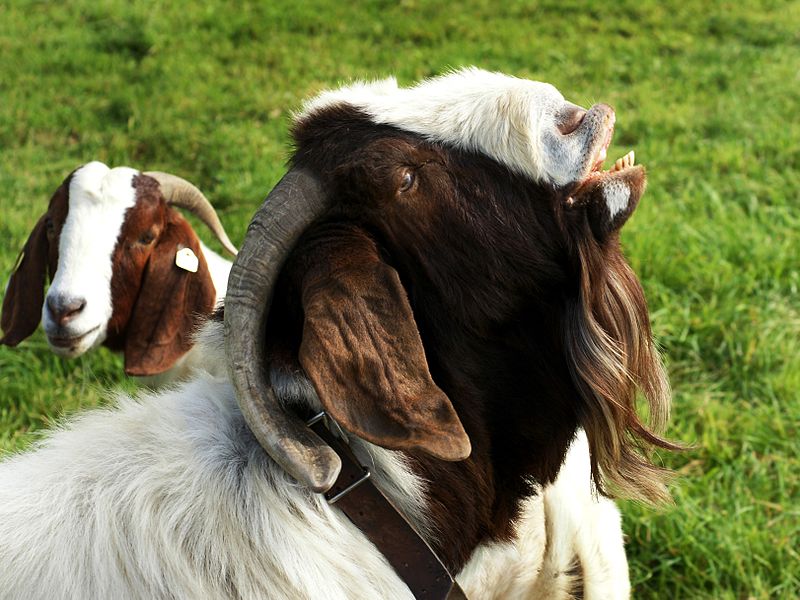 Goats don’t need a sexy R&B; groove, a romantic dinner with champagne, or a full-body massage when they want to get it on. No sir, just give ‘em a little urine, a good tail wag and some strange noises and it’s on, baby. Here are some of the ins and outs of goat sex that you may not be familiar with. Note of caution: there’s a lot of pee involved.

Here’s the basic run down on how goats have sex, from their first flirty interactions to the dirty deed.

To signal that she’s open for business, a doe wags her tail furiously in what’s aptly called tail flagging. The move, sometimes in combination with increased vocalizations, is a sweet sweet siren song to a rutting buck (an adult male goat that still has all his parts).

Step 2: The Buck Sniffs Her Pee

Next, a buck will saunter over to check out the scene. The doe, if interested, will squat down and pee, which is kind of like a goat’s version of writing your room number on a cocktail napkin in a hotel bar – things may be heating up. The buck next leans in for a good whiff of that fresh urine (or right into her urine stream), then lifts his head back in a move reminiscent of a human gargling, pulling his lips back from his teeth in an Elvis-style curl. This odd-looking action is called flehmen, and it helps the animal get the scent of the pee to his vomeronasal organ (also called Jacobson’s organ), which is located near the nasal bones and helps the buck detect pheromones that clue him into whether the lady is looking for a little lovin’. Flehmen training starts early, with bucklings beginning to test out this behavior on the pee of doelings starting at just a few days old.

Speaking of pee: during mating season, the males spray themselves down in their own urine, covering their faces, beards, chest and front legs. How? Well, if you’ve ever seen a male goat pee you know it’s like a small fire hose in terms of aim and power. So that explains it. This is basically the goat equivalent of a guy dousing himself in Ax body spray, but here, it actually does help him get laid.

Step 4: They Dance Around the Subject

Once a buck has determined the doe is indeed up for mating, he’ll often run next to her, nuzzling her side and rear with his tongue out and his front legs and ears jutting forward, all while hooting and hollering like a country boy at a monster truck rally. This is what’s called the “rush-grumble.” The noises sound like blubbering, mewing, snuffling, clucking, almost like a dog squeaky toy that’s seen better days. The pair then prance around a bit before the party really gets started. Females come into heat on average every 21 days for up to three days at a clip. The doe’s heat cycle rises and falls during this time and she’ll only mate if her cycle is on the uptick, which is called a standing heat.

According to the folks over at Fias Co Farm in Mooresburg, Tenn., there’s another strange behavior often exhibited by does after a successful mating session. They call it a “girl boner” and it happens when the buck has done his job right. The doe squats as if going to pee, but tucks her front and back legs together as if trying to roll into a ball in what appears to be an ecstatic and involuntary action. It actually seems more like an orgasm than a boner, but whatever, you get the point.

The lucky buck who has proved his mettle and risen to the top of the goat hierarchy (or has been chosen by the farmer for whatever superior traits they’re looking for) has to be in prime condition for mating as he’s likely to reduce his food intake while his testosterone is raging and can lose a lot of weight. Plus, there’s the amount of mating to consider. A healthy buck three years and older can mate with upwards of 40 does at a time if given the chance. The females gestate for about five months before giving birth, sometimes to twins or even triplets.

And there you have it, folks. Hope this comes in handy sometime.

One of the best articles on goats dirty deeds with notorious comments. Loved reading it and was useful as well. Thank you

Best ever run down of goat sex and breeding. The analogies clearly explain all the goat love behaviors. Thanks for the good read!

Very well written, we would watch our goats perform these and other rituals with amazement (no need for cable television). when you have an Alpha male in a sea of fixed and unfixed males the soap opera as the world turns comes to mind! Don’t forget the alpha female (The Queen) top of the pecking order, she can keep 20 or so others in their place. Love the article. Thanks.