Ah, the terroir of central Brooklyn. 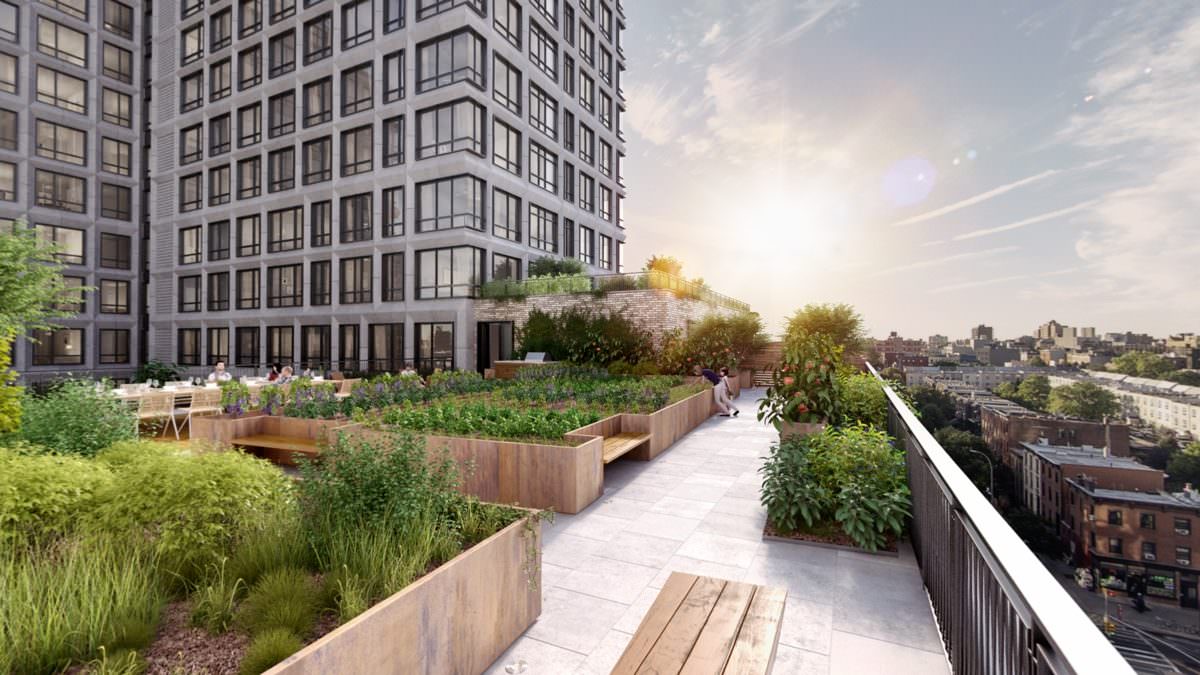 But here’s one we haven’t seen much of: Rooftop gardens. That’s right: one gigantic new-construction condominium building in the heart of Brooklyn is making urban agriculture a fundamental part of its pitch. 550 Vanderbilt is a huge 278-unit building in what was formerly called, and probably still best known as, the Atlantic Yards, a massive public works project to transform a defunct train terminal into a commercial and residential zone anchored by the Barclays Center, home of the NBA-worst Brooklyn Nets.

“Since day one there was always the idea that we’d be instituting some form of agriculture into the design of the building,” says Brandon Specketer, a senior associate at COOKFOX, the architecture firm that designed the building. “The question was more about how it’d work into the design in a meaningful way.” Because the building is so big, there are plenty of nooks and crannies to tuck fun stuff throughout its 17 stories, and what the designers came up with is a whopping 520 square-foot gardening space on a huge eighth floor terrace.

Urban gardening is big in Brooklyn; fire escapes and rooftops host (illegal, but cheerful) gardens during the summer, and any tiny swatch of land that a Brooklynite can snag is treasured as if it’s a National Park. Enterprising farmers have reclaimed the tops of buildings for farms. But we haven’t seen anything quite like this: space set aside in a residential building specifically for gardening plots.

On that eighth floor terrace is, basically, a coop gardening plot. The building is carting soil up to a series of 24-inch-deep raised beds connected by wooden planks to allow access from either side. Depending on how they’re split up, they’ll end up with somewhere between 18 and 27 plots, each four feet wide, says Ashley Cotton, the executive vice president of external affairs at Forest City New York, the building’s developer. There are hose hookups, but also integrated irrigation systems, which makes these plots essentially plug-and-play. Toss in some seeds or seedlings, and watch them grow.

There don’t appear to really be any plans for allocating the plots; they’ll work, says Cotton, on a first-come, first-serve basis, at least for now. (Some people have already moved in, but the building, nor the terrace with the plots, won’t be fully open for a few more weeks.) But one area will be spoken for already: the acclaimed restaurant Olmsted, located just a few blocks away, will be using a plot to grow chiles, and Ian Rothman, Olmsted’s resident farmer, will be conducting paid gardening lessons for residents.

The building has a gym, a library and a concierge, too. But why spend time there when you can grow tomatoes?