Down the Rabbit Hole

Clean, quiet, and easy to raise, these little critters might be the next big thing in sustainable meat. All ears? We've got the low-down on hare care. 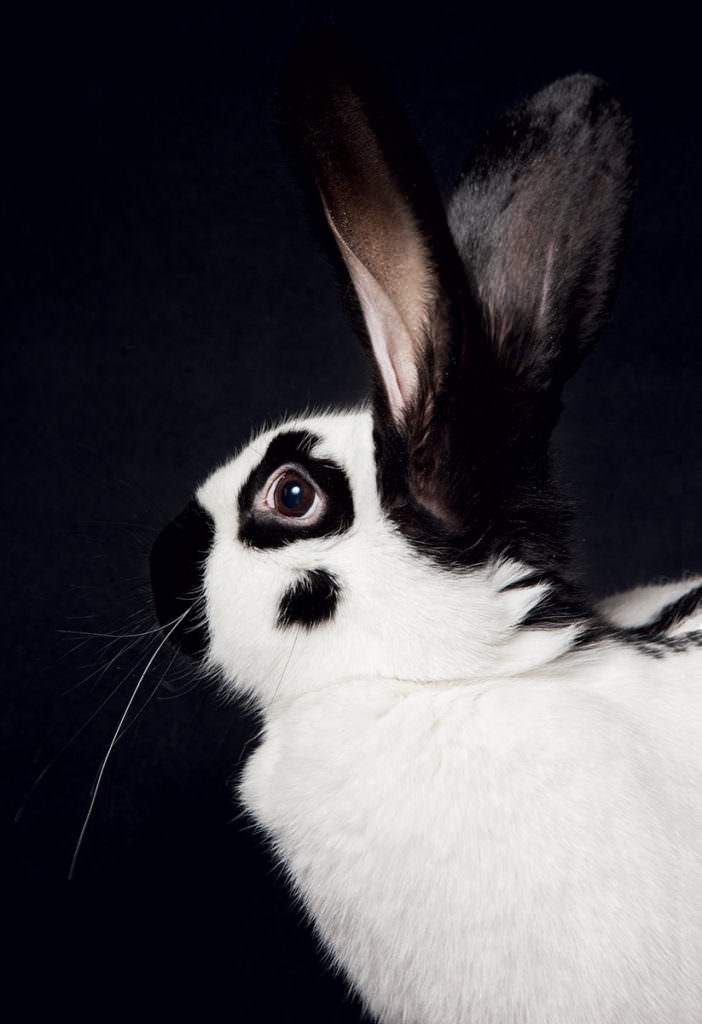 We all know the saying. And yep, rabbits really do go at it like, well, rabbits – breeding rapidly enough to horrify any parent whose child brings home a pair as pets. View the math through an agricultural lens, however, and the small mammals’ sexual prowess proves incredibly appealing. As little as $30 can buy a mating duo capable of producing some 40 offspring in a single year. Roughly half will be females, who can yield their first litters at 7 to 11 months of age. Three-month-old meat rabbits fetch roughly $10 per pound (up to $20 for choice cuts), versus about $3 per pound for chicken. Follow the rising population and profit curves, and you’ll wonder why rabbit hutches aren’t as common a sight along rural roads as chicken coops.

“I can’t keep up with demand,” says Tommy Enright of Black Rabbit Farm in Amherst, Wisconsin. A former indie-rock DJ, the 32-year-old sells around 500 fryers annually to high-end restaurants in Madison and Milwaukee and finds the lack of competition surprising. Most bunnies, he explains, boast a generous meat-to-bone ratio, and the meat is higher in digestible protein and lower in fat, cholesterol, and calories than chicken, beef, or pork. “Rabbits are also meticulously clean and easy to handle. You can raise them anywhere,” he says. (Check local zoning laws through your state’s department of agriculture.)

The typical American kid would rather eat Brussels sprouts than Bugs Bunny.

The problem – in the United States, anyway – stems from those adorably twitching noses and floppy ears. The typical American kid would rather eat Brussels sprouts than Bugs Bunny. Here, meat rabbits represent such a minor industry that the USDA last bothered to gather stats in 2000, when each of us consumed an average of 0.02 pounds. To put the dated data in perspective: The French ingested about 2 pounds of lapin per person in 2014, the same year folks in China’s Sichuan province wolfed down 8.4 pounds apiece.

But we may be coming around to the idea of cooking Peter Cottontail. Localharvest.org currently lists more than 750 rabbit-meat producers nationwide – a growing number that could be related to increased environmental awareness, according to Anne Fanatico, an associate professor of sustainable development at Appalachian State University in Boone, North Carolina. Compared with cattle, rabbits convert feed to meat more efficiently. “They’re the next big thing in pastured livestock,” she says.

The first step in developing your own rabbitry involves connecting with an area breeder to purchase at least one female (doe) and one male (buck); raising-rabbits.com maintains a national breeder registry. Cheryl Wixson, co-owner of Rabbit Hill Farm in Stonington, Maine – among the country’s few certified organic operations – counsels against overthinking breed selection, beyond the obvious criteria. “The larger ones are best for meat,” she states plainly. In other words, leave the purebreds to show-bunny types. Farmers tend to hybridize heritage European breeds with modern strains that offer desired characteristics, such as strong maternal instincts.

Wixson, 62, also issues a warning to impatient entrepreneurs: “Your start-up costs take a big bite out of your initial profits.” Chief among those costs? Housing. A single doe and her nursing kits require a hutch at least 2 feet tall and 6 feet long. Same goes for each buck, which must be kept separately due to aggression. A hutch this size – which should sit a few feet above the ground so droppings can fall through the wire floor – will set you back $100 to $180 at sources like hayneedle.com, though frugal, handy types might want to check out morningchores.com for building plans and some fun IKEA hacks. Ideally, rabbits should be granted access to an enclosed outdoor run for a few hours each day to exercise; a 6- to 8-foot-diameter area, with a chicken-wire roof, floor, and walls, will suffice for a backyard hobbyist raising a few dozen animals and rotating the gang through the run.

Another major expense, for Wixson anyway: Organic rabbit pellets – not yet manufactured on the scale of other organic feed – go for roughly 60 cents per pound. From spring through fall, she’s able to save on feed by providing a natural grass diet, via movable “rabbit tractors” that allow for rotational grazing. That, too, has a financial downside. “It takes longer to get the rabbits to slaughter weight,” Wixson explains, “because I’m not shoving grain down their throats, so to speak.”

Tommy Enright also employs rabbit tractors for pasture-raising and reports a 12-week “grow-out” period for fryers, instead of the eight or so weeks conventional operations expect. The practice is labor-intensive, he says, because a single person can’t lift the enclosures alone: “If you drag them, the bunnies will get caught in the fencing.”

Regardless of whether your herd spends most of its time in mobile tractors or stationary hutches, you should outfit each shelter with a hanging waterer and feeder. Stock the latter with alfalfa-based pellets, supplementing the feed with weed-free Timothy or other grass hay for fiber, plus healthy snacks like oats, black-oil sunflower seeds, carrots, and apples. (Visit kwcages.com to find feed and accessories.)

Though relatively robust, rabbits do exhibit a few notable sensitivities. First, they scare easily – so much so that they’ve been known to die of heart attacks if a barking dog runs up to the hutch. Susceptible to heat-stroke when the temperature surpasses 80 degrees, bunnies can faint on hot days. Site hutches in a three-sided, shaded shelter for some insurance against disaster. In high summer, follow Enright’s lead and lay a few frozen bottles of water inside the enclosures.

Bunnies are also prone to tummy trouble, especially the digestive ailment coccidiosis. Organic-certification standards outlaw antibiotics, so Wixson urges “sanitation, sanitation, sanitation.” She explains, “If rabbits sit in a shitty pen, they’re going to get diseased.” Unfortunately, the wire floors that contribute to a clean habitat can cause “bumblefoot,” which could lead to an excruciatingly painful and sometimes life-threatening bacterial infection. Wooden platforms may provide relief; just be sure to clean them regularly.

One last item that belongs in every hutch: a faux burrow. You can buy a ready-made version (at kwcages.com) or retrofit a cardboard box by cutting out a rabbit-size door. The box should measure about 12 by 18 by 10 inches and have a removable lid for easy cleaning. “It gives the animals a place to scoot into where they feel safe,” says Wixson. And when it’s time to make bunnies, the box acts as a nest. 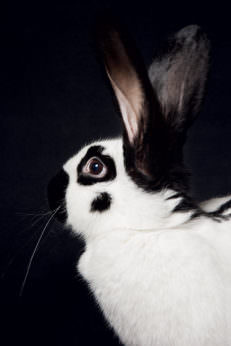 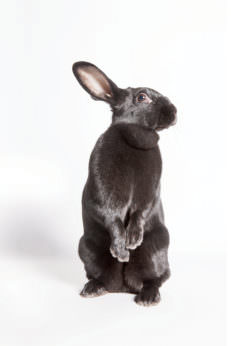 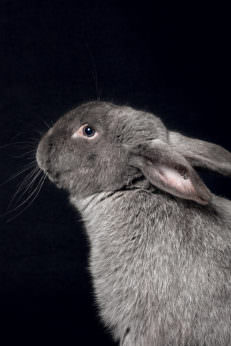 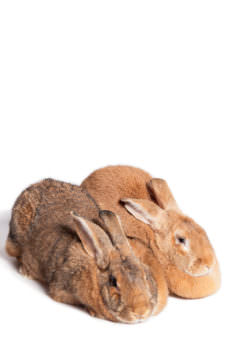 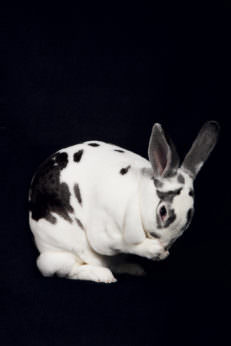 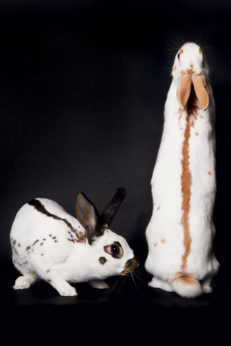 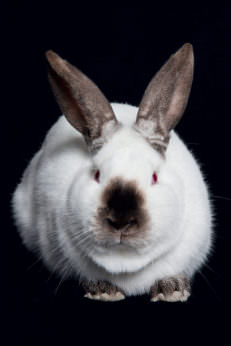 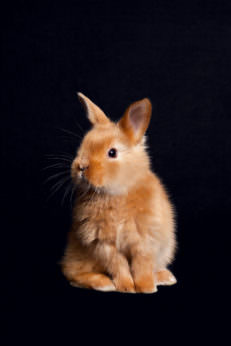 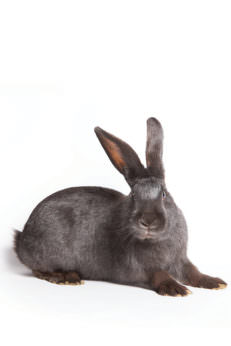 Rabbits reach sexual maturity starting at 6 months of age. For females, ovulation is induced by copulation, though overheated, stressed, or ill rabbits are unlikely to mate successfully. Take the doe to the buck (never the other way around, as does may defend their quarters and hurt the bucks), then let nature take its course. You’ll know the act is over – usually within seconds – when the buck dismounts and falls on his back. Never leave the pair unattended, and separate them immediately after consummation to avoid fighting. Bring them together again in a few hours to ensure conception.

Approximately 30 days later, a litter of tiny, hairless kits will enter the world. Just prior to kindling (giving birth), the mother will remove tufts of her fur to line a nook at the back of the nest box to keep her babies warm. Give her a hand by disinfecting the box and filling it with 1 to 2 inches of fresh pine shavings, plus a 6- to 8-inch layer of fresh straw, no later than the 27th day after breeding (during summer, an inch or two of straw does the trick).

Newborns are best left in the care of their mother. Check on them periodically to remove any that don’t survive (the runt often doesn’t). Within about two weeks, the bunnies will come bounding out of the box, and in another two to four weeks, you can begin transitioning the youngsters to their own hutch or tractor for the grow-out phase. Many farmers rebreed just two weeks after kindling, a six-week cycle that produces eight litters annually. Wixson and Enright, however, opt for only three or four kindlings a year and wait at least five to six weeks to begin weaning – a more humane approach, but one that significantly affects the bottom line.

Still, there’s no denying the end game. Assuming you can get past rabbits’ inherent cuteness, processing is often permitted on-farm, under the same exemptions used for chickens. (Check with your state’s department of agriculture to determine local laws.)

Three years into raising rabbits, Enright is in the black, though he pockets more from pasture chickens. “Rabbits could become my most profitable livestock,” he says, “but because I supplement with organic pellets, the margin shrinks.”

Wixson derives some extra income via value-added products: Rabbit terrine and smoked rabbit are staple menu items in her catering business, and she ships pelts to eco-conscious fashion designers. She also sells rabbit droppings – the “bunny berries” long prized by organic gardeners – to friends. “The manure can go straight into the soil,” she explains. “You don’t even have to compost it, and the worms absolutely love it.” Now that’s the kind of agricultural output even Bugs-loving American kids could get behind.

i love all the information given