Home cooks may be hot for all those premeasured ingredients, but how do farmers feel? 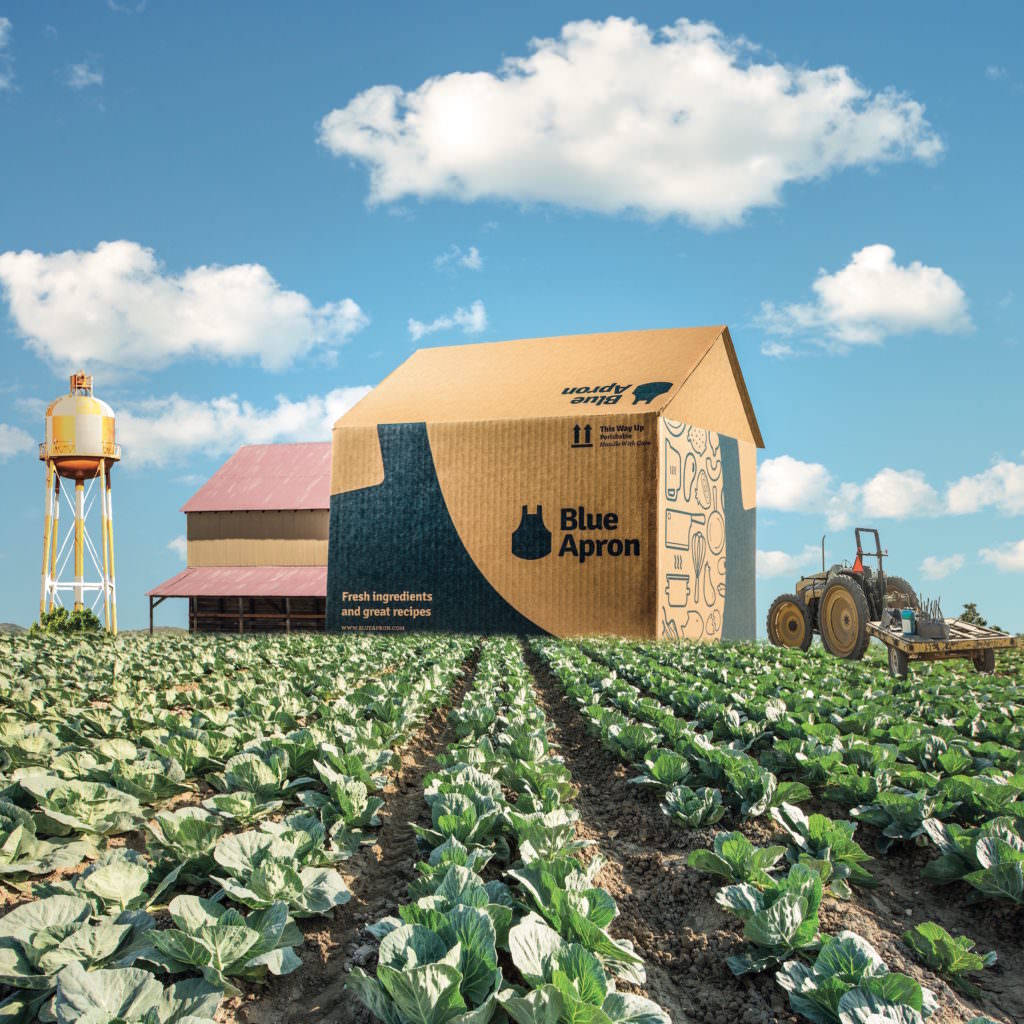 Toby and Brandon Tull are ecstatic. Their words bounce off each other like dueling guitars at a rock concert as the thirtysomething siblings take the phone to tell me about The Home Grown Farm, the diversified 100-acre operation in Gholson, Texas, that they started with their mom and younger sister five years ago. Toby, a former IT consultant, and Brandon, who worked in financial services, have increased the family business’s revenue nearly tenfold in a single year, thanks primarily to an app that allows CSA subscribers to customize the contents (vegetables, cow’s milk, and chicken meat and eggs) of their weekly deliveries. But at this particular moment, late last May, the Tull brothers were most excited about a recent order for cucumbers.

Those cucumbers – approximately 20,000 pounds of a cultivar called ‘Salt and Pepper’ – represent Home Grown’s first sale to Blue Apron, the start-up that’s pioneering a new way to put dinner on the table and, therefore, a new way for farmers to move their goods. Launched in 2012, the New York City”“based company ships more than eight million meals a month, each packed in boxes with premeasured ingredients and step-by-step instructions for, say, Seared Cod and Udon Noodles with Shiitake Broth and Togarashi-Spiced Cucumber.

Fans of the service point to such factors as convenience (no grocery store runs, no measuring, almost no room for error); cost (at $10 per serving, cheaper than most restaurants); quality (sophisticated recipes that incorporate farm-fresh ingredients); and waste reduction (very little in the way of landfill-bound leftovers).

The desire to deliver a consistent menu nationwide has forced Blue Apron to stretch the definitions of “local” and “seasonal” pretty far.

Detractors lament the plastic packaging and cardboard boxes that contain all those ingredients, not to mention the lack of culinary spontaneity. FXX’s hit series You’re the Worst parodied the problem this season: When the acerbic sitcom’s boring- husband character presented his wife with a “Red Napkin” subscription and promised “no surprises, ever,” she stabbed him with a kitchen knife.

Blue Apron, currently valued at $2 billion and reportedly on the verge of an IPO, may be the most successful player on the domestic meal-kit delivery scene, but it’s hardly the only one. In addition to major competitors like HelloFresh and Plated, the 150 or so companies that comprise the U.S. industry include brands that cater to vegans (Purple Carrot), Paleo fanatics (Caveman Chefs), and organic and non-GMO purists (Sun Basket), plus dozens of smaller local and regional outfits.

For the Tulls, the vast quantity of cucumbers and, then, squash that Blue Apron bought last spring and fall radically changed their 2016 balance sheet. “Just those two orders almost met our break-even point for the year,” says Toby. Not all farmers share his enthusiasm, however. Blue Apron and its ilk typically pay midway between wholesale and retail prices, which can seem like a king’s ransom to anyone accustomed to dealing with wholesale distributors, yet very little to those who sell directly to consumers through farmers markets and CSAs.

“Ultimately, fewer dollars trickle down to people like us,” explains Lauren Langworthy, co-proprietor of Blue Ox Organics, a 153-acre farm in Wheeler, Wisconsin. Blue Ox once supplied celeriac to a Minneapolis meal-kit firm, but Langworthy says it wasn’t worthwhile economically and she missed the connection with CSA customers.

“They needed 40,000 pounds. If you’re a large mechanized farm and can grow it for 80 cents a pound, that might work out. I couldn’t do it.” – Martin Stosiek, farmer

Martin Stosiek of Hillsdale, New York, declined a recent offer from Blue Apron to grow Swiss chard. “They needed 40,000 pounds. If you’re a large mechanized farm and can grow it for 80 cents a pound, that might work out. I couldn’t do it for close to what they were willing to pay,” explains Stosiek, whose Markristo Farm spans about 24 acres. “And if they didn’t accept my chard? I wouldn’t have much of a Plan B.”

Some 30 miles south, in Clinton Corners, Tyler Dennis dedicated 25 percent of his 12 acres to Blue Apron this past season, cultivating pea shoots, purple daikon, and baby fennel – crops he considers predictable and nowhere near as diverse a mix as the 150 varieties he raises on the rest of Alewife Farm. “I wouldn’t do something risky for them,” Dennis cautions, in part because it’s just a handshake deal. Though Blue Apron followed through, purchasing what it asked him to grow, he adds: “There’s always a chance that something catastrophic could happen in the fields, so it’s best to not have too many eggs in one basket.”

To the company’s credit, Blue Apron sourced 75 or so crops from independent American farms in 2016, instead of relying solely on distributors that amalgamate produce and meat from around the globe for major retailers. These middlemen tend to add “food miles” galore and can’t be bothered to track down unusual vegetables, much less vouch for their suppliers’ treatment of employees, live-stock, or the environment.

Plated, which boasts “farm-sourced seasonal ingredients,” did not respond to repeated requests for an interview. HelloFresh, which makes a similar claim, replied to our inquiries via an email statement – “we source a growing percentage of our produce direct from growers” – yet provided no details regarding that percentage or those growers.

Only Blue Apron spoke openly with Modern Farmer about its supply chain. Matthew Wadiak, the company’s 38-year-old chief operating officer and one of its three co-founders, acknowledges that, while half of Blue Apron’s produce comes straight from farmers, building a similar supply chain for meat, eggs, dairy, grains, and legumes remains a work in progress. Wadiak also admits that not all partner farms adhere to certified organic standards or any sustainable practices at all – though he aims to change that.

“If you’re a conventional farmer, we pay you more if you start transitioning to organic. If you’re already an organic farmer, we measure you based on your native pollinators, the biodiversity on your farm, and the carbon in your soil,” explains Wadiak. “As the company grows, we want to make sure we’re not subscribing to the status quo of how we buy food and inject it into the supply chain. I want to rewrite how things are done, as if starting from scratch.”

In 2015, Blue Apron began actively recruiting a network of farmers in an effort to coordinate their plantings en masse. So hypothetically, when the weekly menu calls for 80,000 pounds of purple daikon radishes, five different growers will sow those seeds 12 weeks in advance – a system tracked on an enormous spreadsheet that projects availability up to three years out for menu-development purposes.

The company also employs a team of 11 experts, including soil scientists and agronomists, to monitor data from each farm and offer prescriptive advice. For instance, Blue Apron encourages folks like Tyler Dennis of Alewife Farm to strategically cycle pea-shoot crops, which fix nitrogen in the soil, through his fields to maintain fertility levels.

In a previous life, Wadiak enjoyed a career as a chef, working under Alice Waters, Charlie Trotter, and Paul Bertolli and securing all kinds of fresh ingredients from nearby producers. But Blue Apron’s desire to deliver a consistent menu nationwide has forced him to stretch the definitions of “local” and “seasonal” pretty far. Much of the produce is indeed grown within 200 miles of one of three fulfillment centers – in Richmond, California; Arlington, Texas; and Jersey City, New Jersey – before being shipped to customers in the closest region. At times, though, produce from one region must be trucked to another. Some of the Tulls’ cucumbers, harvested in Texas the last week of May, made the trip from Arlington to Jersey City, and then to subscribers in the Northeast, where such vegetables were still a month away from harvest.

Wadiak began sourcing grass-fed beef – a seasonal commodity, since pastures don’t thrive all winter long – from New Zealand, after persuading some of the country’s ranchers to adhere to strict standards for how a cow is cared for and slaughtered. “There’s less carbon emitted to aggregate meat on a shipping container on a boat from New Zealand than if we were driving it from Nebraska to Chicago,” he says.

And what of the “food miles” solution suggested by the recent surge in hyperlocal meal-kit companies? Wadiak would argue that they sacrifice mass reach for ideology. As for his past jobs – at such paragons of sustainability as Chez Panisse – the former chef says, “It doesn’t really help the American public, or the agricultural community, if you’re serving $300 dinners. My goal now is to get people cooking the right kinds of food and making that cost-effective, which means finding a way to replicate the model at scale.”

If he succeeds, it just might be the hat trick our national food system needs.

Popular
Could Dissolvable Cranberry Film Replace Plastic Packaging Someday?Emily Baron Cadloff
Alaskan Salmon Face a Stream of New MinesBecki Robins
7 Smokable Plants You Can Grow That Aren’t MarijuanaBrian Barth
Where Has All the Mustard Gone?Chloe Faure
Why Don’t We Eat Turkey Eggs?Dan Nosowitz
Explore Modern Farmer
Related
Environment, Food & Drink
Where Has All the Mustard Gone?Chloe Faure
Animals, Environment, Health
To Stop New Viruses Infecting Humans, We Must Protect Bat HabitatAlison Peel, Peggy Eby, Raina Plowright
Animals, Food & Drink, Lifestyle
The Great (Sticker Shock) ThanksgivingLindsay Campbell
Environment, Food & Drink, Water
Egg Whites Could be the Key to Cleaning Our OceansShea Swenson
wpDiscuz
We use cookies on our website to give you the most relevant experience by remembering your preferences and repeat visits. By clicking “Accept”, you consent to the use of ALL the cookies.
Cookie settings ACCEPT
Privacy & Cookies Policy