Bored with mums? Try these eco-friendly late-bloomers instead. 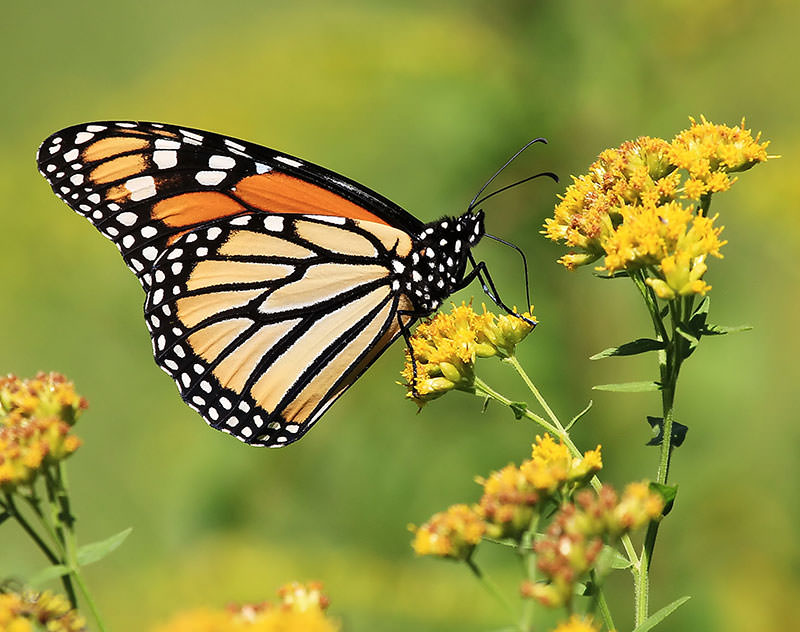 You’d be forgiven for thinking these were the only two species in the world that bear flowers beyond September, but that couldn’t be further from the truth. Take a walk in any natural area this time of year, and you’re bound to see some of the dozens of native North American species that come into their full floristic glory after the autumn equinox, each of which plays an important role in local ecosystems.

Here’s a selection of the most eye-catching fall-flowering natives, along with a few well-adaptive non-natives, all of which can be found in well-stocked nurseries and online seed catalogs. The bees, birds, and butterflies will thank you!

Just like the turning leaves, the appearance of dusky yellow goldenrod blossoms is a sign that fall has arrived. There are a variety of native goldenrods found throughout North America, which are easily adapted to garden conditions. Growing 2 to 3 feet tall in sun or part shade, goldenrod is highly drought tolerant and nearly foolproof, making it a popular choice for wildflower gardens. Grow from seed or potted plants. (Note: goldenrod is often blamed for hayfever, but is actually non-allergenic; hayfever is caused by ragweed, which blooms at the same time, but has small nondescript flowers). 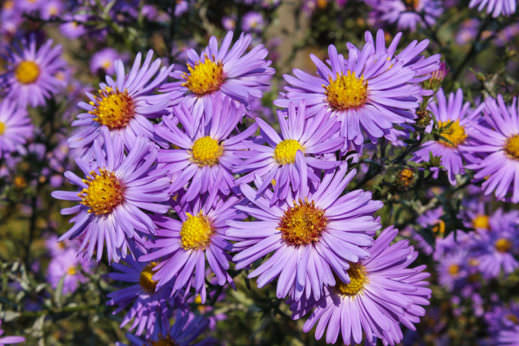 Purple asters, with their dainty lilac petals and yellow-button centers, are a perfect companion to goldenrod, and in fact the two are often seen flowering among each other in the wild. Like goldenrod, there are various species of purple aster native to different parts of North America, all of which grow roughly 2 or 3 feet tall, are drought tolerant, and are adapted to both sun and part shade. Both are an abundant food source for a variety of native birds, butterflies, bees, and other insects and wildlife. Grow purple aster from seed or potted plants. 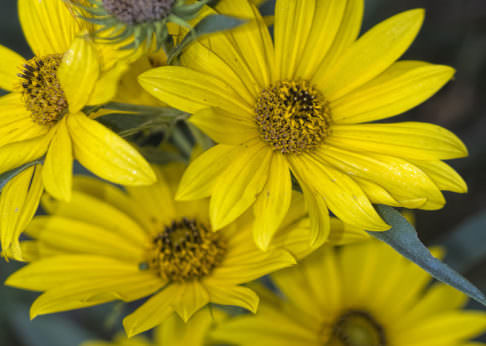 Native to central North America, but adapted to garden conditions throughout much of the continent, Maximilian sunflower is a perennial fall-blooming species, unlike it’s more widely known, summer-blooming annual relatives. It grows just as tall as other sunflowers though, reaching anywhere from 5 to 8 feet in height before erupting in 3-inch yellow blooms. Growing in dense clumps, Maximilian sunflower is extremely drought tolerant and perfect for the back of a perennial border, or to create a quick vegetative screen. Easy to grow from both seeds and potted plants. 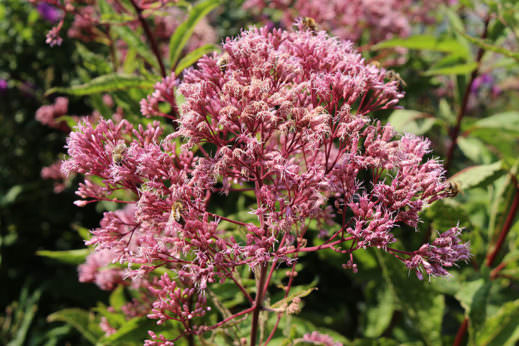 The burgundy-colored Joe Pye weed blossoms, which grow to the size of a dinner plate on stalks 5 to 8 feet tall, are the perfect complement to Maximilian sunflower in a wildlife garden. Adored by butterflies, Joe Pye weed starts to bloom in late summer and keeps going well into fall. This species does require rich, moist soil to thrive, however. Plant it in full sun and give it lots of space, as this is a truly epic plant. Grow from seed or potted plants. 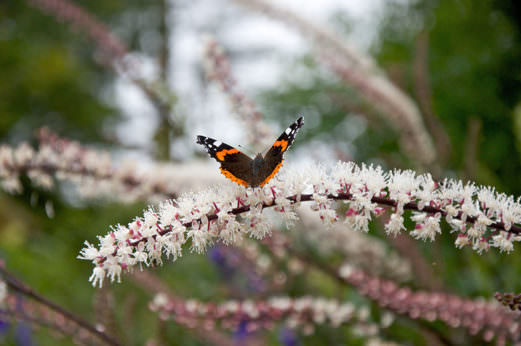 Another native fall-blooming beauty of enormous proportions, bugbane grows up to 6 feet tall and is topped with 12- to 18-inch wispy white honey-scented flower spikes, which glow brightly in the moonlight. There are several native species from different parts of North America, and many ornamental cultivars are available, including a few that feature striking cabernet- or chocolate-colored foliage, such as the varieties ‘Black Negligée’, ‘Atropurpurea’, and ‘Brunette’. Bugbane likes rich, moist soil and prefers partial shade, though it will tolerate full sun in cool climates. Alternative names for bugbane include black cohosh and snakeroot. It is easiest to grow from potted plants. 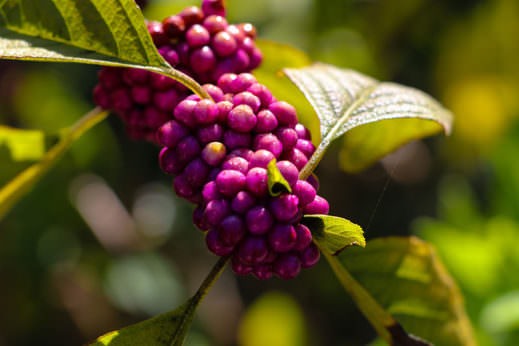 Beauty berry is not fall-blooming, so much as a fall-fruiting. It’s springtime flowers are not what this native North American shrub is known for, however – it’s the vividly-colored pea-sized pinkish-purple berries that grow in dense clusters throughout fall and into winter. Beauty berry is quite shade tolerant, making it one of the best choices for adding autumn color to a woodland garden or other areas that don’t receive full sun. It prefers rich, moist soil and grows 6 to 8 feet tall and wide. The berries are a favorite snack among migrating birds. Grow beauty berry from potted plants. 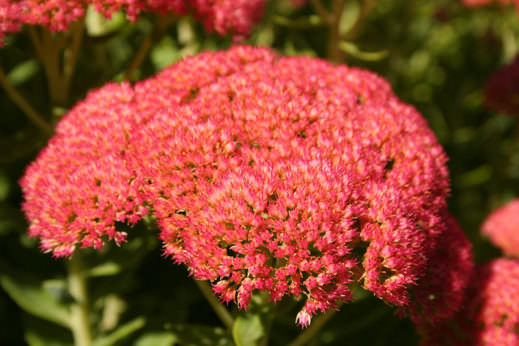 This bombproof succulent has four-inch burnt red blossoms atop 2-foot tall gray-green leaf stalks. Though not native to North America, this widely adapted and non-invasive species is often utilized in wildlife gardens, where it is frequented by butterflies. It requires little to no irrigation once established and its blossoms last throughout the fall, finally fading to a rust color when the flowers dry in early winter. It’s best to start with a potted plant, though Autumn Joy sedum is easy to propagate by cuttings once you have an established clump. 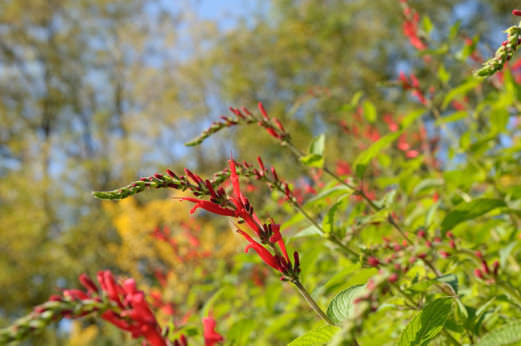 Here’s a fall-bloomer for folks in southerly latitudes, though it may also be grown in colder zones as an annual. Pineapple sage produces its three-inch lipstick red blooms in late summer and continues into early winter, or until it is nipped by frost. The flowers are a hummingbird magnet, while the foliage has a punchy, tropical fragrance and is used to make a refreshing iced tea. Pineapple sage grows approximately 4 feet tall and wide and prefers full sun and rich, moist soil. Grow from potted plants.

I’m a registered monarch waystation in south Carolina and in need and knowledge of plants for the migration to Mexico. Thank you for the insights!