The Dirty Truth About Cold-Pressed Juice

The real cost of the juicing fad? Food waste. Tons of it. 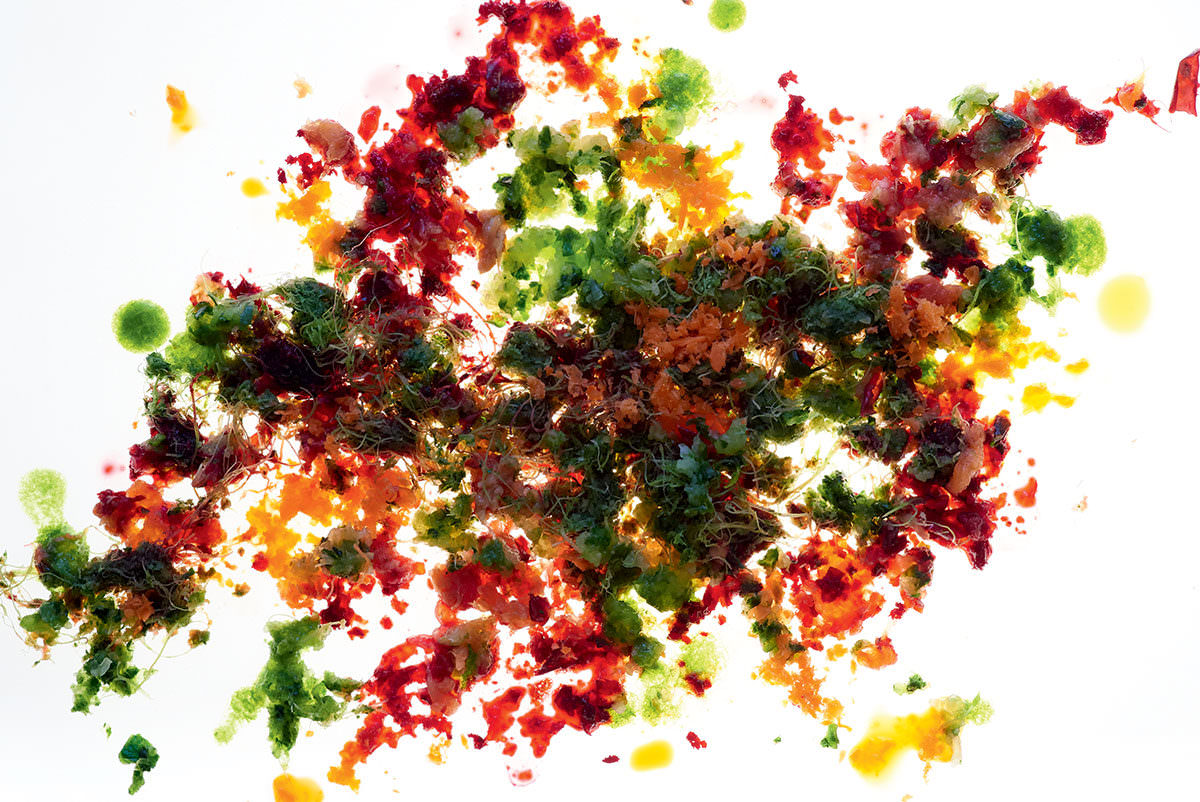 I was a cold-press virgin until the moment a pretty girl in an apron handed me a tall glass of green liquid. The intensity of the flavors – kale, cucumber, and ginger – was a revelation. But then I caught sight of the stuff she cavalierly tipped from her juicing machine into a garbage bag: roughly three pounds of edible food. I haven’t touched a cold-pressed beverage since.

Linked with fasting, “cleanses,” and the raw-food movement, these fruit and vegetable drinks continue to skyrocket in popularity, whether made-to-order like mine or bottled, pressure treated, and refrigerated for purchase within a few weeks. Such a short shelf life contributes to sky-high prices, which a certain demographic is more than willing to pay. Projected 2015 sales of bottled cold-pressed juices exceed $400 million. That’s nearly 15 times 2010’s actuals. (The traditional juice industry – Tropicana, Minute Maid, and the like – isn’t quaking. Its sales topped $15 billion last year.)

The Real Cost of that $8 Juice

100 million 16-ounce servings of cold-pressed juice were sold domestically in 2015.

The amount of pulp waste estimated to have wound up in landfills last year totals 175,000 tons.

The end result: The methane generated as the pulp decays is equivalent to some 200,000 tons of carbon dioxide emitted into the atmosphere. (Methane’s potency as a green- house gas is 34 times that of CO2 on a 100-year scale.

Some Whole Foods stores devote nearly 40 feet of shelf space to cold-pressed or fresh-squeezed juices; Jamba Juice claims more than 800 outlets nationwide; and smaller chains and independents keep sprouting up in the sort of urban neighborhoods where people don’t blink at spending $8 on a nonalcoholic beverage.

Because cold-pressed juices are squished, rather than shredded by blades, they may contain more of certain vitamins (like A and C) and bioactive phytochemicals (like carotenoids) than their mass-produced, heat-pasteurized counterparts. Compare sipping a green juice to simply eating greens, though, and it’s a different story: “Juices lose fiber and the nutrients attached to that fiber,” explains Marion Nestle, a professor of nutrition at New York University. Moreover, one 16-ounce serving of cold-pressed fruit juice can contain twice as many calories as 2 cups of raw vegetables.

That same serving of juice generates up to 4.5 pounds of pulp, depending on the ingredients. So where does all the leftover cucumber, mint, kale, apple, and carrot go? In the worst nightmare of a zero-waste zealot, straight to a landfill. There, the pulp rots and generates methane (see “The Real Cost of That $8 Juice,” right).

A better option, environmentally speaking, involves composting the pulp. Progressive cities including San Francisco and Seattle require all residents and businesses to segregate their food scraps and other organic waste before the stuff is collected and converted into fertilizer. But in most municipalities, carting such waste to a compost facility remains more of a boutique operation. Many juicers can’t, or are unwilling to, pay the additional rates charged for the carting – assuming their local composters even want the pulp. “It’s too wet and heavy for my mix of materials,” says David Buckel, senior organics recovery coordinator for the NYC Compost Project, who manages compost at several New York City farms.

Will Brinton, the founder of Woods End Laboratories, a soil-testing firm in Mount Vernon, Maine, explains the science behind Buckel’s resistance: “Juice pulp is highly degradable, unlike leaves and lawn clippings. The microbes tear into it, their population grows rapidly, and they consume a great deal of oxygen.” Compost that becomes anaerobic not only smells really bad, it also generates acids that can actually slow the breakdown of food waste. The remedy, Brinton tells his clients, is to add more oxygen and carbon-based materials like wood chips, sawdust, and yard waste – things urban composters often have trouble getting their hands on. 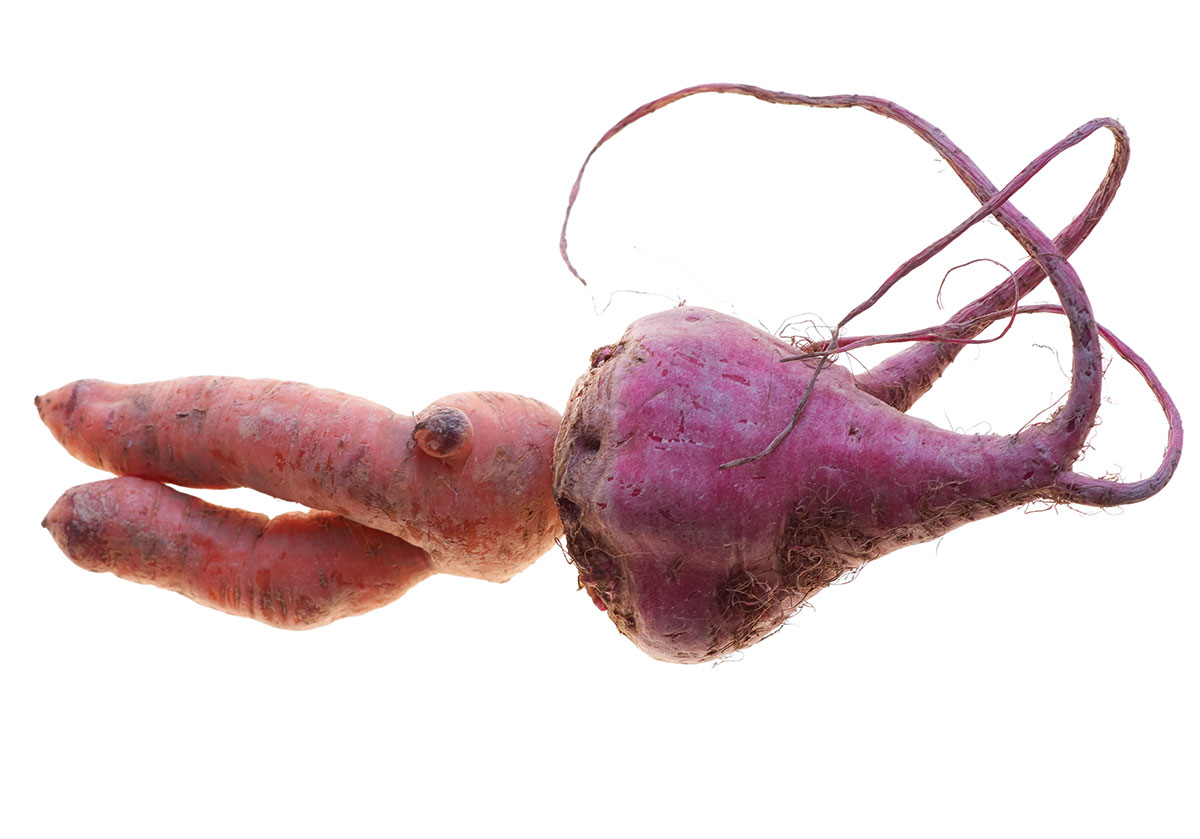 Some juicers reduce their environmental footprint by using imperfect-looking fruits and vegetables, which farms often discard.

Good compost improves soil, of course, but according to the U.S. Environmental Protection Agency, using pulp to feed animals offers a superior way to repurpose fruit and vegetable waste. “Cows have been the ultimate recyclers of food forever,” says Michael Van Amburgh, a professor of animal science at Cornell University. “All major producers of juice worldwide sell the by-product to cattle-feed suppliers. Whether it’s beet, tomato, apple, or carrot pulp, those leftover carbo-hydrates and pectins are part of a balanced diet.” Each year, Tropicana alone dries 700,000 tons of orange peels that become feed. “The issue is scale,” Van Amburgh adds. “In a city, the juice operation might be too small, and moving pulp could be too expensive.”

TJ DiCiaula, the owner of SuperCharge! Foods in Madison, Wisconsin, hasn’t let logistics thwart his tiny closed-loop efforts. “I take my juice pulp to friends with ducks and chickens, or they pick it up from me,” DiCiaula says. Juicers in other cities face regulatory hurdles. Michael Schwartz, who runs the Organic Food Incubator in Long Island City, Queens, would love to send his dregs to a swine or dairy farmer in the tristate area. His company provides kitchen space and equipment for small food and beverage start-ups, including juice outfits that leave behind plenty of pulp. Unfortunately, local laws prevent small businesses from hauling the material without a carting license. For six months, Schwartz paid a licensed service to make runs to a compost facility but found he couldn’t sustain the increase in cost. “This kills me, but I’m sending the pulp to the landfill,” he says.

Not every last bit of it, however. In 2015 the East Coast juice chain Liquiteria, which operates out of Schwartz’s incubator kitchen, delivered hundreds of pounds of segregated vegetable pulp to chef Dan Barber of Manhattan’s Blue Hill restaurant. Seeking ways to give value to “uncoveted” foods, Barber launched a short-term pop-up venture, crafting beet-pulp burgers; whipping chickpea water into a thick mousse and plopping it atop salads; frying skate cartilage until it resembled a cracker. His pop-up is history, but the juice-pulp cheeseburger makes an occasional appearance on Blue Hill’s bar menu.

Some cold-pressed juice brands are stepping up to the plate, too. The California-based company Forager Project resurrects much of the pulp from its bottled juices to create organic vegetable chips. 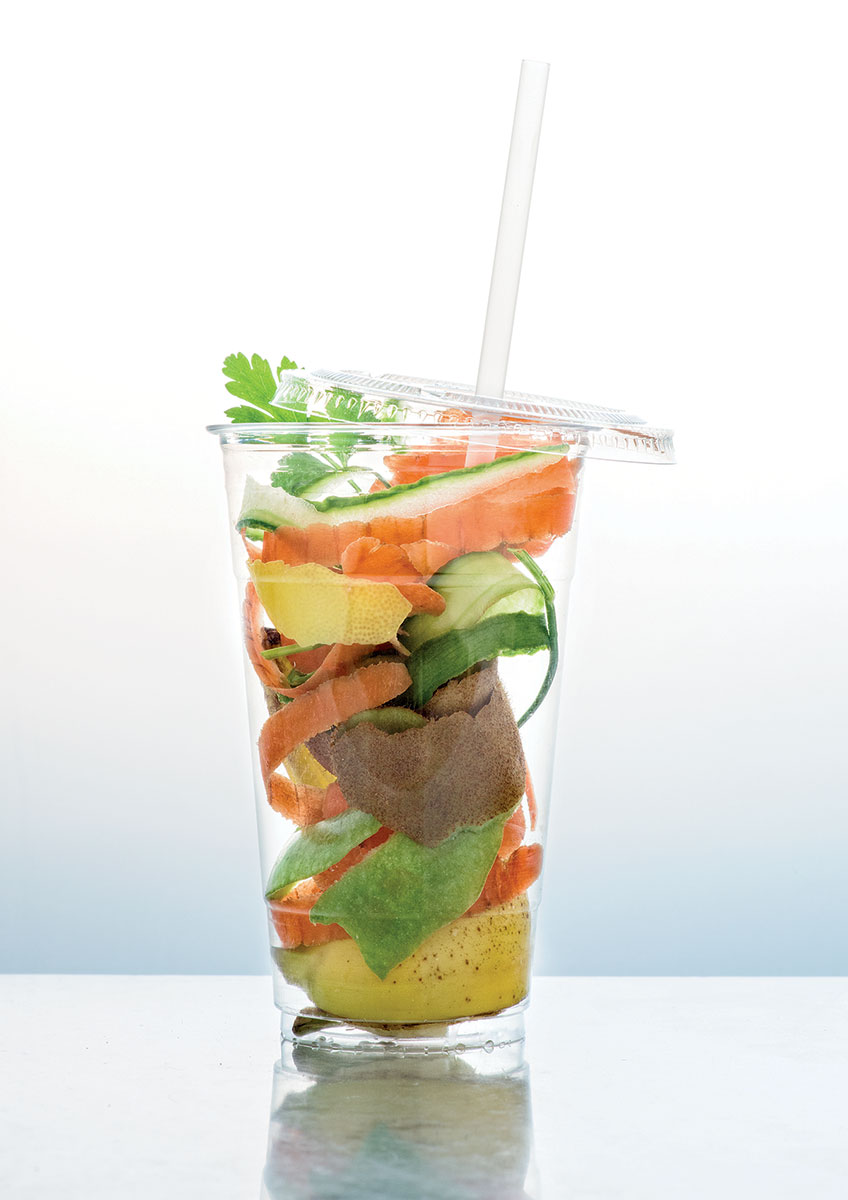 Even juicers who don’t reduce their downstream environmental footprint have plenty of opportunity to slash waste upstream by using imperfect-looking fruits and vege-tables, which farms often discard knowing the goods will be rejected by supermarkets. There’s nothing wrong with this produce, apart from being under- or oversize, the cucumbers too curvy or the carrots too crooked. The move doesn’t just save a juicer money; it also helps growers sell what would otherwise be a loss. Consumers never know the difference. This makes cold-pressed juices that advertise their imperfect provenance a stealth tool in the war against food waste – a way to educate the public that good taste and nutrition are largely independent of cosmetics.

In truth, almost everything we eat produces edible waste. Yogurt and cheese making, for example, generate copious amounts of protein-rich whey. (In Greece, they drink the stuff or use it as a marinade.) Restaurateurs, operating on slim profit margins, are particularly loath to discard edible bits and routinely transform them into stews and casseroles. Conscious home cooks sneak juice pulp into sweet foods, like cookies, or fold it into soups and sauces for added nutrients, fiber, and flavor. Manufacturers of small-batch juices, some argue, should behave no differently.

“The question is how we approach those by-products,” Dan Barber says. “Will they become ingredients in their own right? That is the challenge the juicing industry now faces.”

Elizabeth Royte is the author of Garbage Land: On the Secret Trail of Trash and Bottlemania: How Water Went on Sale and Why We Bought It.

“A single 16-ounce serving of cold-pressed juice generates, on average, 3.5 pounds of pulp waste.” You can use the solids in smoothies, soups, breads, or compost it and us it in your garden. I wouldn’t call it “waste”. “The amount of pulp waste estimated to have wound up in landfills last year totals 175,000 tons.” That terrible estimate is based on the assumption that 0% of the solids are used in other recipes, composted, or added to smoothies. Look at the math – 3.5lbs X 100 million servings = 175,000 tons. Strange huh. “The end result: The methane generated as… Read more »

I juice everyday and my food waste gets composted and used togrow more fruits and veggies. You could also make awesome dehydrated treats with it. 😉