Even Without a Drought, We’re Depleting Groundwater at an Alarming Pace

Kevin Dennehy likes to compare the country's groundwater supply to a bank account - and we're withdrawing too much. 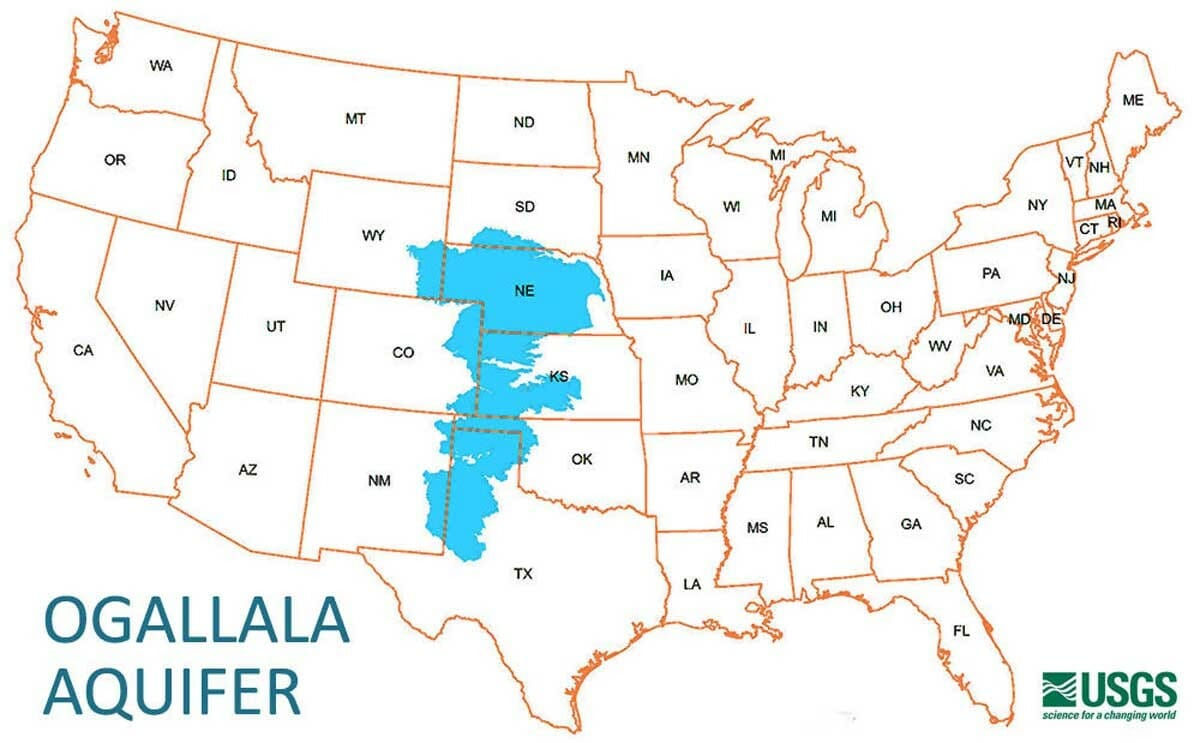 “Just like your bank account, you have funds coming in, funds that are in your bank, and funds that are going out to pay bills,” says Dennehy, the groundwater resources program coordinator for the United States Geological Survey. “The same concept holds for groundwater. We look at the water coming in and the water in storage, filling the space between the granules of soil and sediment, and water going out through withdrawals, into streams, or across geologic boundaries.”

It’s called depletion, and it occurs when the rate of water loss outstrips recharge (the water coming back into the system).

That’s what’s happening right now in western Kansas where some farmers aren’t able to get enough water for their crops from wells fed by the Ogallala Aquifer, which underlies portions of eight states, stretching for nearly 175,000 square miles from South Dakota to Texas. It’s part of the High Plains Aquifer system that sits below one of the primary agricultural regions in the country.

According to Dennehy, the USGS – the government agency tasked with providing reliable scientific information on the health of our ecosystems and environment, among other responsibilities – has monitored this aquifer system for “many years” and the system is continuing to show depletion. He references a 2014 USGS study, which found there was a drop of 15.4 feet in the system from predevelopment times (before 1950) to 2013, with 2.1 feet of that loss occurring between 2011 and 2013. So, that’s 13.6 percent of the loss occurring in just two out of the 60-plus years studied.

But, like a spendthrift with lackluster accounting skills, there’s too much withdrawal and not enough coming back in to keep the water account open.

Another USGS study that looked at aquifer depletion levels across the U.S., including Alaska and Hawaii from 1900 to 2008, also found the process of depletion is speeding up. The water loss between 2000 and 2008 represents about 25 percent of the total loss of 1,000 cubic kilometers that has taken place in the 108-year span. The amount of water we’re talking about could fill Lake Erie twice. A lot of that water pulled from the ground eventually ends up making its way to the oceans, since more water is coming in than can go out through evaporation and other means. This raises global sea levels.

There are various ways to slow depletion, including conservation, increased efficiency of water use, and using alternative water supplies, like brackish groundwater (water containing dissolved solids that must be desalinated before use), says Dennehy. It’s also worth pointing out that in many parts of the U.S., agriculture relies on surface water, not groundwater, to irrigate crops, since in some places groundwater isn’t easily accessible.

So what are farmers to do when their well runs dry? Generally, they can dig more wells or deeper wells, but that means shelling out money. Eventually, they could find that the cost of trying to get water to irrigate their crops outweighs what they could get for those crops at market.

For farmers who rely on the Ogallala Aquifer, there may be a bigger problem. In the High Plains Aquifer, of which the Ogallala is part, “there’s not a freshwater resource deeper” for farmers to drill down into, says Dennehy. This isn’t the case in California’s Central Valley Aquifer and the Mississippi Abatement Area, where depletion is also taking place.

Daniel Devlin, director of the Kansas Water Resources Institute at Kansas State University, told The Kansas City Star in a recent interview that he was “hopeful for California” since “if it starts raining and snowing, their problem may somewhat take care of itself until the next drought” but the problem in Kansas “is going to be here rain or shine.”

If and when it gets to that point – a 2013 study forecasted that the High Plains Aquifer would be 69 percent depleted by 2060 – the options for farmers are more limited and could include switching from irrigation farming to dry farming or substituting more drought-resistant crops for what they are currently growing.

“These will all have to be considerations for alternatives for their standard practices that they’re working now,” Dennehy tells Modern Farmer in a phone interview from the USGS headquarters in Reston, Virginia.

Dennehy is part of an ongoing project for the USGS to assess the nation’s groundwater availability in order to develop water budgets for the country’s major aquifers. The information they gather will be used to help local governments and related water agencies responsibly manage their groundwater resources. According to Dennehy, until we know exactly how much groundwater we have, we can’t begin to plan its management. This project will go a long way toward figuring out just what the nation has to work with.

Any thought on building a pipeline from the Great Lakes? A big one, 10 to 15 feet in diameter.

[…] to the short-grass prairie environment, which is particularly fragile because it overlies the rapidly depleting Ogallala Aquifer. (He discusses his concerns about the dwindling water supply HERE as part of an […]

The water loss between 2000 and 2008 represents about 25 percent of the total loss of 1,000 cubic kilometers that has taken place in the 108-year span. The amount of water we’re talking about could fill Lake Erie twice. What is the total reserve of this aquifer. In the way the groundwater is being pumped in the Ogallala aquifer, as a hydrogeologist I afraid the life of the aquifer is not long. How long it will take for the depletion of the this aquifer. This aquifer needs artificial groundwater recharge in the present status of heave depletion. Some the following… Read more »