Get a Load of Our Manure Guide - Modern Farmer

Get a Load of Our Manure Guide

How to choose the right poop and put it to good use. 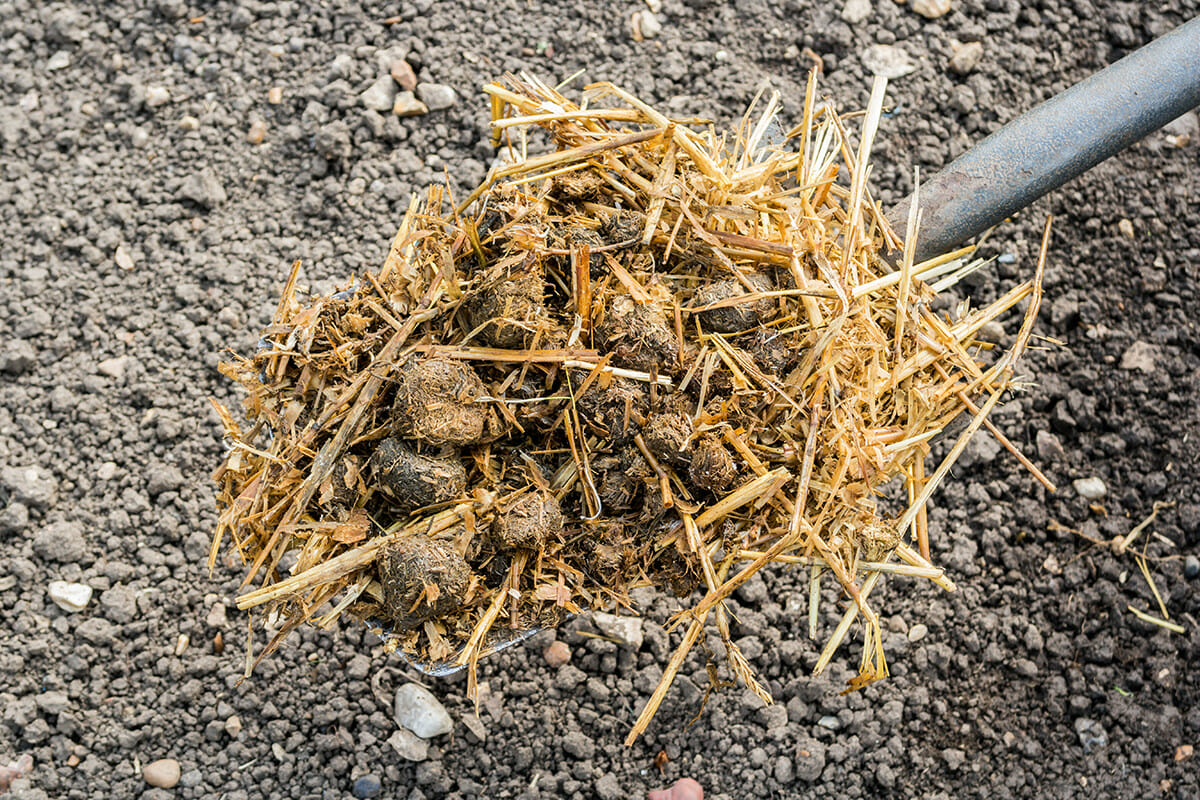 The most important point to consider when choosing manure is how much nitrogen it has in it. Most manures have so much nitrogen they will ‘burn’ the roots of plants, making the leaves brown and stunted rather than green and lush. These are called ‘hot’ manures and must always be composted with carbon-rich materials, like leaves or straw, before they are applied to the soil.

Some manures – mainly from large herbivores like horses and cows – already have the ideal carbon-to-nitrogen ratio of 25-to-1, meaning they can be tilled directly into the soil without worry of overfertilizing. These ‘cool’ manures tend to be crumbly with bits of grass still visible in them. The hottest manures come from omnivores, like chickens and pigs, and are stinkier and slimier than those with less nitrogen.

There is a spectrum of potency in herbivore manure. In general, the more grass an animal has in its diet, the lower the nitrogen content. Animals that like to eat woody plants (goats) or vegetables (rabbits) have more concentrated nutrients in their feces.

Herbivore manure is relatively cool and is fair game for using in the garden without composting first, though in most cases it’s best to age the manure for at least a month or two before using.

Cow
Manure from dairy cows is a good bet for using straight and fresh in the garden – it’s ok to just spread a thin layer of it over the soil and till it in. Steer manure (from cows raised for beef) is usually richer (i.e. higher nitrogen) because the animals are fed and cared for differently and should be aged or composted before use.

Horse
Horse droppings are slightly richer than cow patties, so they are typically composted before using in the garden. Weed seeds pass right through a horse’s digestive system and may sprout in the garden if the manure is used directly, but the heat generated in a compost pile renders them inviable. If you’re not worried about weeds, it’s OK to till it in fresh and let it decompose in the soil for a month or so before planting.

Goat, Sheep, Llama and Alpaca
Unlike the loose crumbly dung of cows and horses, goat, sheep, llama and alpaca manure comes in the form of hard pellets. Those pellets pack plenty of nitrogen and need to be aged or composted before tilling into the soil.

However, it is safe to use the bedding material as mulch around fruit trees, vines and berry bushes, where it will age in place with the nutrients slowly leaching into the soil. This is much simpler than tending to a compost pile, and the pelletized form of these manures usually means odors are minimal.

One side note about sheep manure is that it has a higher potassium content than most other manures, making it the ideal fertilizer for potassium-loving crops like asparagus.

Rabbits
Rabbit poop wins the prize as the most concentrated herbivore manure. Rabbits don’t produce poop in the quantity of larger animals, so consider it a special commodity and use it sparingly on vegetable seedlings as a nitrogen boost. Soak rabbit poop in water for 48 hours and apply as a dilute liquid fertilizer.

You may not think of chickens and pigs as omnivores, but technically they are, even if bugs and worms are the only types of meat they’re eating. They have much hotter manure than herbivores that should never be used directly, not even as mulch. It’s best to compost omnivore manure thoroughly before using, rather than aging it.

Swine
Pig poop is the mildest omnivore manure in terms of nitrogen content. Mixed at a 1-to-1 ratio with straw, it makes a well-balanced compost pile. One interesting aspect of pig poop is its high pH level: use it to help make acidic soils more neutral (i.e. closer to 7 on the pH scale, which is what most crops prefer).

Poultry
Birds poop and pee in one package, making their manure slimy, stinky and very high in nutrients. Chicken, pigeon, duck, turkey and other poultry manures need composting before they are used: mix them with straw at a 1-to-4 ratio for a well-balanced compost pile.

Poultry manures, especially from chickens, are higher in phosphorus than other manures, which is the most important nutrient for flower and fruit development. Use the compost as a nutrient boost for your flower beds or turn it into a liquid fertilizer and apply it to fruiting plants just before they start to flower.

Chicken manure is much more acidic than most manures, making it a good choice for crops that need acidic soil like blueberries.

Bats
Bat manure, commonly referred to as guano, is even more concentrated than poultry waste. It is typically ground into a powdered form and dusted onto the soil like a conventional fertilizer. Wet the soil before applying to avoid nutrient burn, and then spray it down again to wash the guano into the soil.

Guano, which also comes from seabirds, is such a valuable fertilizer that wars have been fought over it. Today it is available in garden centers alongside other all-natural fertilizers in a high-nitrogen and high-phosphorus form.

Humanure
Also called ‘night soil,’ human waste is a traditional fertilizer, though it is used much less in modern times than animal manures. Harvesting humanure and using it safely is far beyond the scope of this article, as there is a risk of spreading infectious parasites.

As a general rule, it’s best to use humanure on plants that are not for human consumption. However, for the purposes of comparison, our poop is a bit richer than that of pigs, but less rich than poultry.

Carnivores have the richest feces of all, but should not be used around plants for human consumption. Since there is a risk of pathogen contamination, we don’t recommend composting cat or dog poop, but this article contains some practical information.

Often, the best source of manure is what’s available on your own property, where you can move it directly from barn to compost pile to garden. If you lack animals of your own, look to the nearest livestock farmer or horse ranch – some may sell pre-composted manure or let you have it for free if you scoop it from the barn for them.

Most of what goes into the animal ends up in the manure, so you may want to inquire if antibiotics or pesticides are being used on the farm where your manure is coming from. If a farm is infested with weedy, invasive plants that you don’t want to spread to your own property, think twice about taking their manure, even if it’s free.

Feed stores and garden centers also sell manure by the bag, usually in pre-composted form. If you want to avoid shoveling manure and only need a small quantity, this is the way to go. On the other hand, there is no better way to get to know the special qualities of different manures than working with them directly.

Great Article, I’m lucky enough to have access to as much Rabbit poop as I could possibly want and need.

I have rabbits and quail. Can I compost both manures with worms to feed to the quail or would the quail dropping kill the worm? Do I need two different compost piles? What about pine shavings from rabbit hutch with rabbit manure?

Are pigeon poop good fertilizer for a vegetable garden…?

Hi there, do you have the manure guide in a format that I can save and refer to in future

I have a case of the GRUNCHIES bit i’ll have to wait till GRUNCH. I also need to cop some GRUCCI.

What about using bear scat for fertilizer

Why no info on donkey manure?

Popular
7 Smokable Plants You Can Grow That Aren’t MarijuanaBrian Barth
6 Differences Between Llamas and AlpacasAndrew Amelinckx
Move Over, Mezcal. A Sustainable Tequila Alternative Is Taking Over.Hollie Stephens
Why Don’t We Eat Turkey Eggs?Dan Nosowitz
Record-Breaking Egg Profits Prompt Accusation of Price GougingClaire Carlson, The Daily Yonder
Explore Modern Farmer
Related
Features, Food Security, Labor
The Rise of Virtual Farmers MarketsLeah Borts-Kuperman
Environment, Labor, Water
California Farms and Farmworkers Attempt to Recover From Record FloodsNaoki Nitta
Food Security, Labor, news
A New Egg Co-operative Has Hatched in the Western U.S.Lindsay Campbell
Food Waste, Plants, Technology
New Solar Panels Allow Farmers to See the LightNaoki Nitta
wpDiscuz
We use cookies on our website to give you the most relevant experience by remembering your preferences and repeat visits. By clicking “Accept”, you consent to the use of ALL the cookies.
Cookie settings ACCEPT
Privacy & Cookies Policy