For All the Tea in Turkey - Modern Farmer
Food & Drink

For All the Tea in Turkey

Turkey is the world's fifth-largest producer of tea and Turks drink more tea than in other countries, no wonder tea is a big thing there. 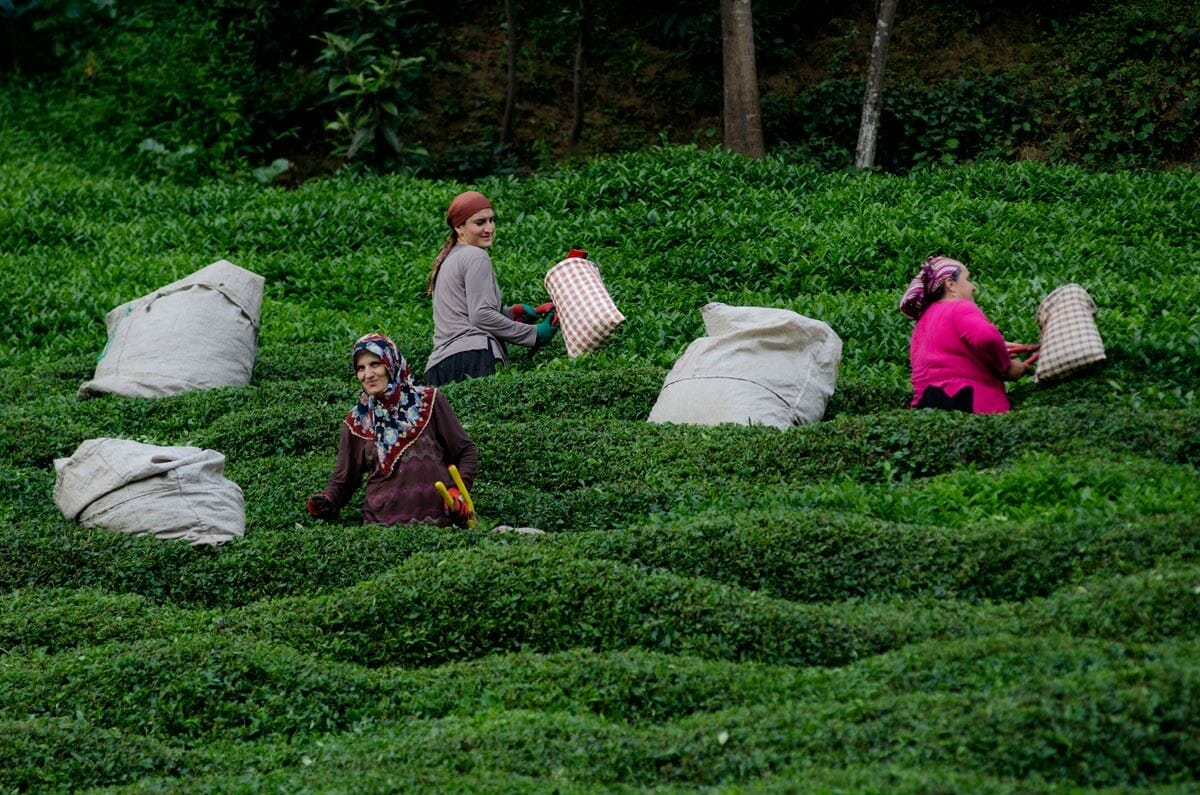 Since the Turkish Ottoman Empire lost much of its coffee-producing territory in Arabia at the end of the First World War, tea has become increasingly popular. To meet this insatiable thirst, Turkey has become the world’s fifth-largest producer of the plant, all of which is harvested on hillsides along Turkey’s eastern Black Sea coast.

Unlike Sri Lanka or India, where harvests continue year-round, Turkish tea must be harvested three times a year in order to make it a viable crop despite cold winter months that curtail the growing season. This means trimming, fertilizing and harvesting run on a tight schedule, and when weather interrupts, profits quickly collapse.

And weather does interrupt ”“ increasingly so. Heavy frost last spring delayed harvesting by several weeks and cost producers and manufacturers more than 15 percent of their annual income, according to an engineer at Á‡aykur, the Turkish state tea production company. With production falling, growers of Turkish tea are getting nervous.

On the steppes of the Kackar Mountains in Rize, northeast Turkey, the hue of lush green hillsides is broken only by the colorful shawls of tea pickers, mostly women. In local villages, collected tea is stored in disused rooms and empty buildings to dry. Green leaves peek out from under tents and outhouses. Even along the most isolated back roads, the smokestacks from tea-drying factories can be seen spiraling into the air. Even the name and emblem of the local professional football team is dedicated to Á§ay.

However, this way of life is now threatened by changing weather patterns, and not just the frost that damaged last year’s crop. According to 35-year-old tea grower Ali Boyama, heavy rain in 2010 caused landslides that destroyed much of his crop and land, which earned him around $700 per ton last year. Boyama blames the troubles plaguing tea growers on changes in regional weather patterns compounded by human activity.

‘There are too many people, too many demands on the land.’

“Tea thrives on rain; it is the most important weather. But there are other problems here,” he says, pointing to a massive construction site at the bottom of the valley, where the latest in a string of hydroelectric dams is being built. “There are too many people, too many demands on the land.”

Under normal conditions, the hills around Rize get about 80 inches of rain per year ”“ twice that of Seattle and about 20 percent more than the continental United States’ wettest city (Mobile, Alabama, since you asked). However, due to a regional weather pattern exacerbated by climate change, the area is drying out.

The North Atlantic Oscillation (NAO), a climatic phenomenon affected by competing levels of atmospheric pressure off the coast of Western Europe, leads to the Black Sea ”“ a body of water larger than the state of California ”“ warming and cooling dramatically at short intervals. According to Temel Oguz of the Middle East Technical University in Ankara, warm years are associated with wetter weather and cold years are generally dry. “Since the mid-2000s, the NAO has resulted in less rain and colder winters in the southeast Black Sea region,” he says, “and tea growing needs rain.”

As a result of shifting global weather patterns, incidents such as the frost snap that caught so many producers by surprise last spring, and the severe downpours that caused the 2010 landslides (which also left at least 12 people in Rize dead) are likely to increase in frequency.

The situation has grown so dire that Lipton Tea, the second largest producer of domestic tea as of 2011, established a program in eastern Turkey to train local producers in methods that prevent soil erosion and proper fertilizer usage. Lipton has several tea estates in the Rize region and works with around 15,000 producers. The program, which concludes this year, is expected to save farmers $1.65 million.

Tea in Turkish teahouses is still cheap at around 80 cents, often about a third the price of a cup of Turkish coffee. Steeped for up to 15 minutes in a Á‡aydanlik ”“ a pot which looks like one kettle sitting atop another — it’s served with much sugar and conversation.

But Turkey wants to start exporting tea even as production, which stood at less than 200,000 tons last year, has been falling since 2011. Turkey’s minister for customs and trade is hoping to establish 10 brands for export in time for the country’s centenary in 2023, as part of a wider government effort to see the country become a major world economy by then. The ruling Justice and Development Party sees Turkey as an economic power and members of the government believe selling Turkish tea to the world would help increase the country’s international presence as an exporter. But a rising population, erratic climate and increasing politically-driven desire to present Turkey and its tea to the world mean that tea may not stay cheap ”“ for producers or consumers ”“ for long.

Related
Opinion, Technology
Opinion: The Rise of Precision Agriculture Exposes Our Food System to New...Austin C. Doctor and George Grispos
Books, Food & Drink
In Michael Twitty’s Kitchen, There’s Room to Be Your Whole SelfEmily Baron Cadloff
Animals, Environment, Plants
Farmers’ Battle Against, and Now For, MilkweedJennifer Taylor
Food & Drink, Plants
The Best Alternative Grain Flours to Have in Your Pantry—If There’s Enough...Pearse Anderson
wpDiscuz
We use cookies on our website to give you the most relevant experience by remembering your preferences and repeat visits. By clicking “Accept”, you consent to the use of ALL the cookies.
Cookie settings ACCEPT
Privacy & Cookies Policy