Photographs of the community garden for one of the largest housing projects in North Carolina. 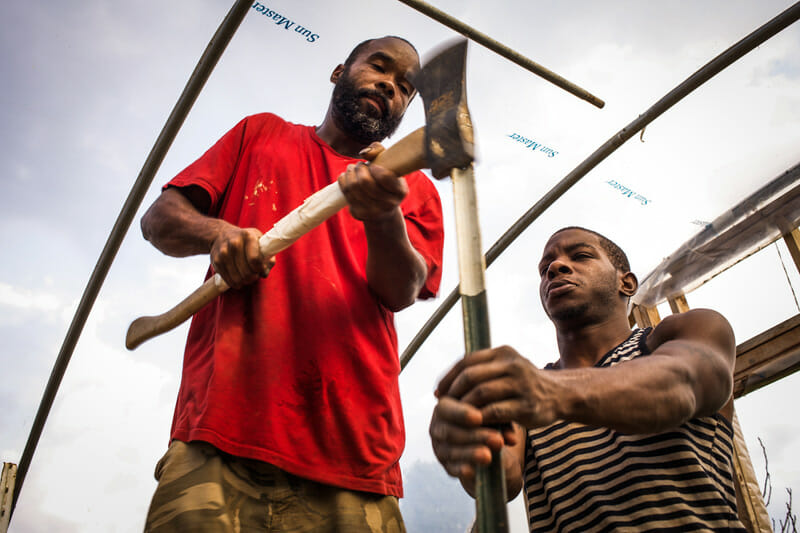 Carl Elijah Johnson and a friend build a trellis system for tomatoes. Johnson said that one of the biggest challenges of the garden is getting people from the community to lend a hand. Fresh food is given in return for volunteering.
Share
Tweet
Pin
Email
3K Shares

In one corner of PVA, rusted fencing from a formerly neglected baseball field now encloses over an acre of green space, tilled into a garden in 2004. Pisgah View Peace Garden was started by a longtime resident of the Pisgah View Housing Projects, Bob White, and handed down to Gardner four years ago. The following year, Gardner hired Carl Elijah Johnson, Jr. The two men now oversee every aspect of the growing and harvesting process.

Gritty concrete streets, overgrown front lawns and crowded stoops tie the PVA community together. Most people in this neighborhood rely on public transportation to get around, and with the nearest grocery store being over a mile away, many people depend on the corner store down the street or rely on others for sustenance. Johnson and Gardner keep the Peace Garden alive in hopes that it will one day result in a more self-sufficient, healthier and happier community.

Kale, green beans, corn, potatoes, lettuce, tomatoes, basil, peppers and squash are just a few things grown at the garden and donated to the community. Produce is also sold to numerous restaurants and at tailgate markets in the Asheville area.

Johnson is a single father living in PVA who has been a full-time employee of the garden for three years. “The garden means a whole lot, because it’s life itself and it’s feeding us better than we have been eating in a long time,” he says. Johnson never thought he would garden for a living. One of the main reasons he works in the garden is to teach his daughter how to plant, maintain the crops and harvest the food. “Once she gets a little older I’ll teach her how to cook it,” he adds. At the garden, you can often expect his daughter to be helping out, eagerly asking questions about the work that the two men do.

Gardner has a troubled past, which is not unusual in PVA. Previous to taking on the responsibility of a day job, Gardner sold drugs as a way to provide for himself and his family. Now he loves working outside and getting his hands dirty in the red North Carolinian soil. He takes pride in his work and the ability to create a positive influence in the community. “It’s been a big impact out here. If you walk around there are a lot of people that’s started installing their own gardens behind their house,” says Gardner. “I work here because I want to empower my community.” 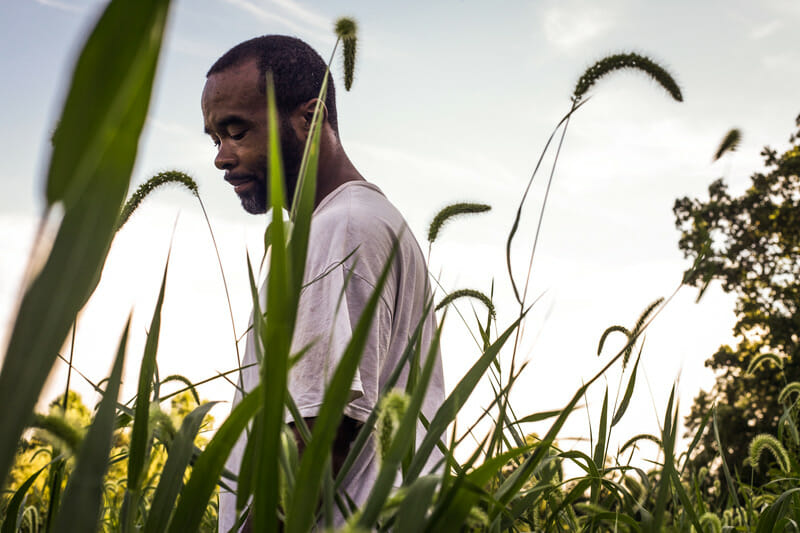 Carl Elijah Johnson harvests potatoes between the weeds at Pisgah View’s Peace Garden. Johnson and Gardner are the only full-time employees working at the garden, making it difficult to do some of the daily chores that come with running the garden, such as weeding. They want to eventually hire more employees and have more volunteers to help out. 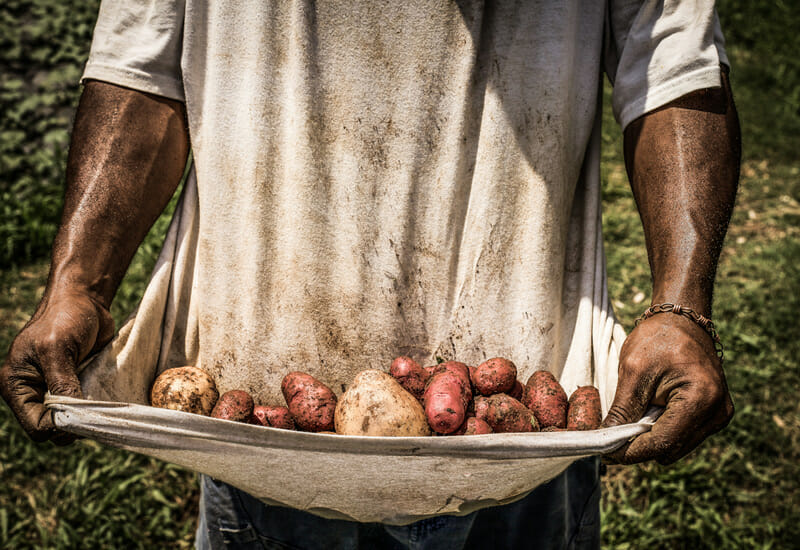 Johnson gathers potatoes from the garden. Many people in the community are wary of eating something that has just come out of the dirt; Johnson wants to change this fear. “Just because something looks clean, doesn’t always mean that it’s good for you” says Johnson. 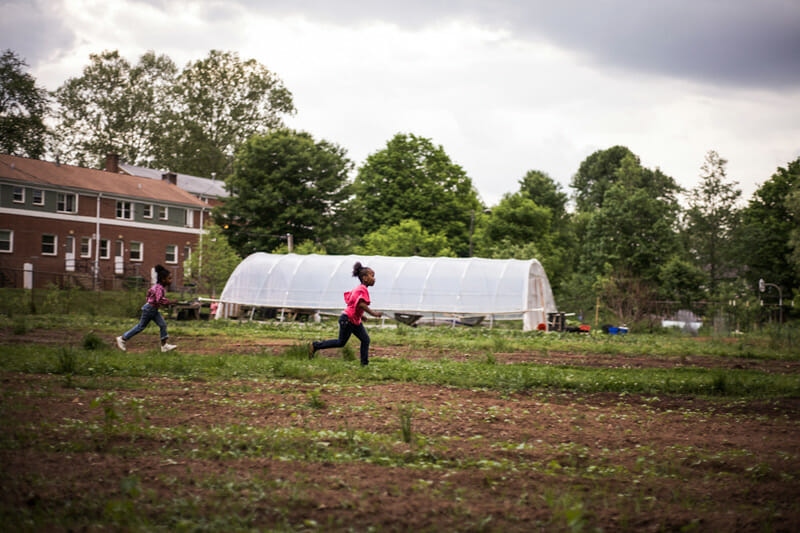 Children from the neighborhood play in the garden in early spring. 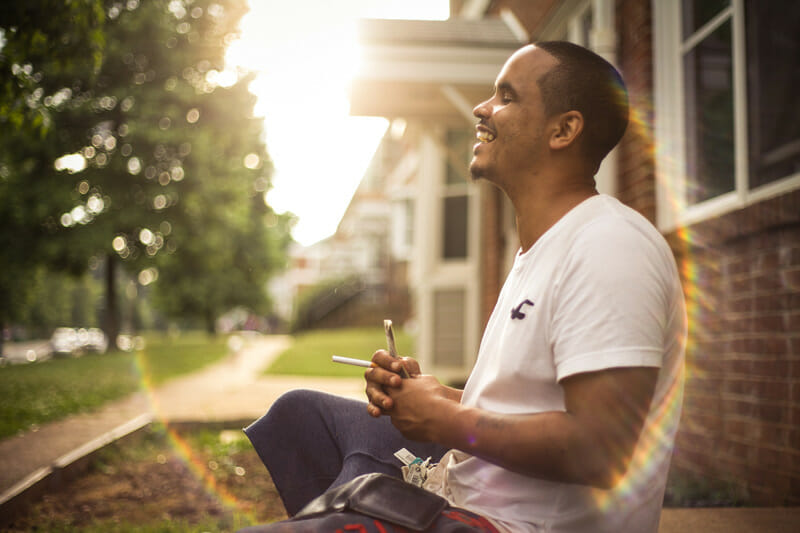 Sir Charles Gardner relaxes on his stoop after a long day of work. Working at the garden has “showed me that you don’t have to have a lot of money to be happy and healthy,” he says. 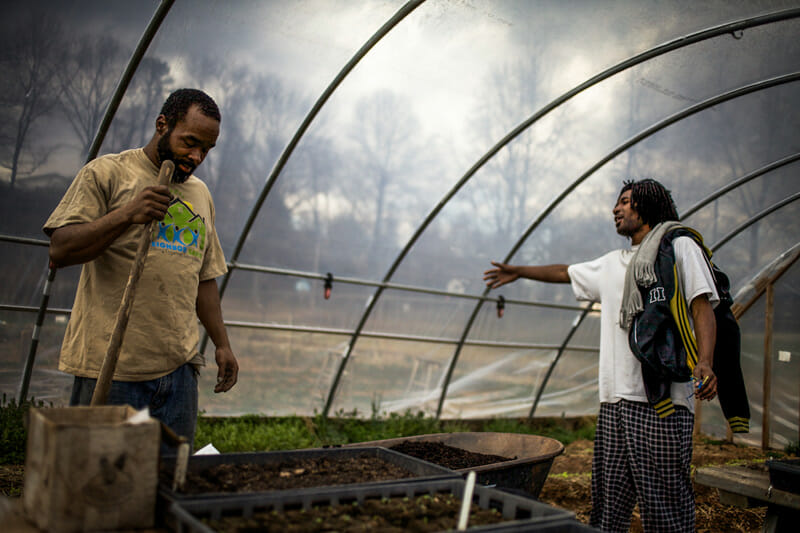 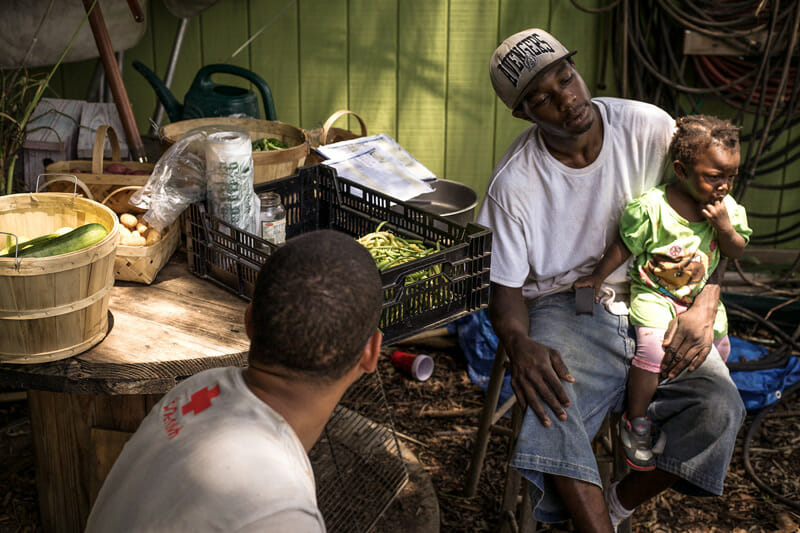 The produce from the garden is grown organically and includes kale, green beans, basil, garlic, corn, potatoes, lettuce, tomatoes, peppers, squash and more. The food is then donated to people in the community, and sold at tailgate markets and to numerous restaurants. Daniel Taylor and his daughter relax in the shade, while Johnson and Gardner collect produce for a tailgate market. 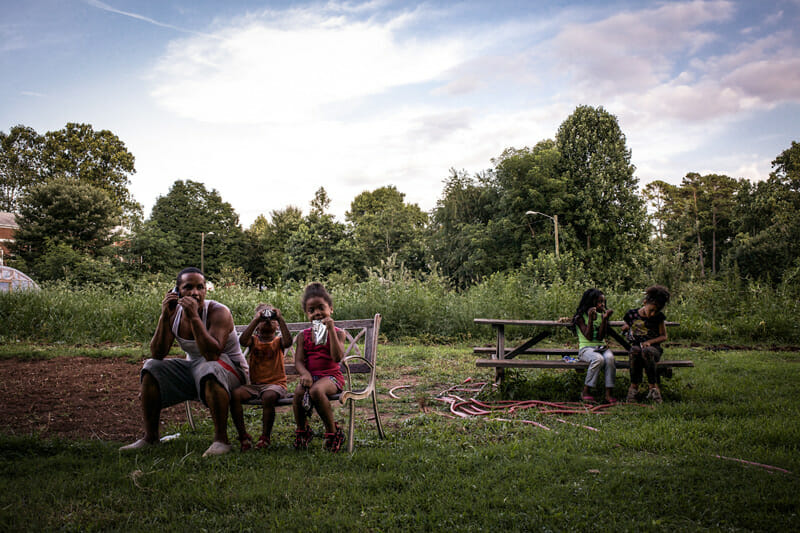 Children are encouraged to come visit as long as they help out and don’t cause trouble. “Just to change people’s lives for the better, teach them the importance of eating healthy, and staying away from McDonald’s and fast-food, and stuff like that,” says Gardner. 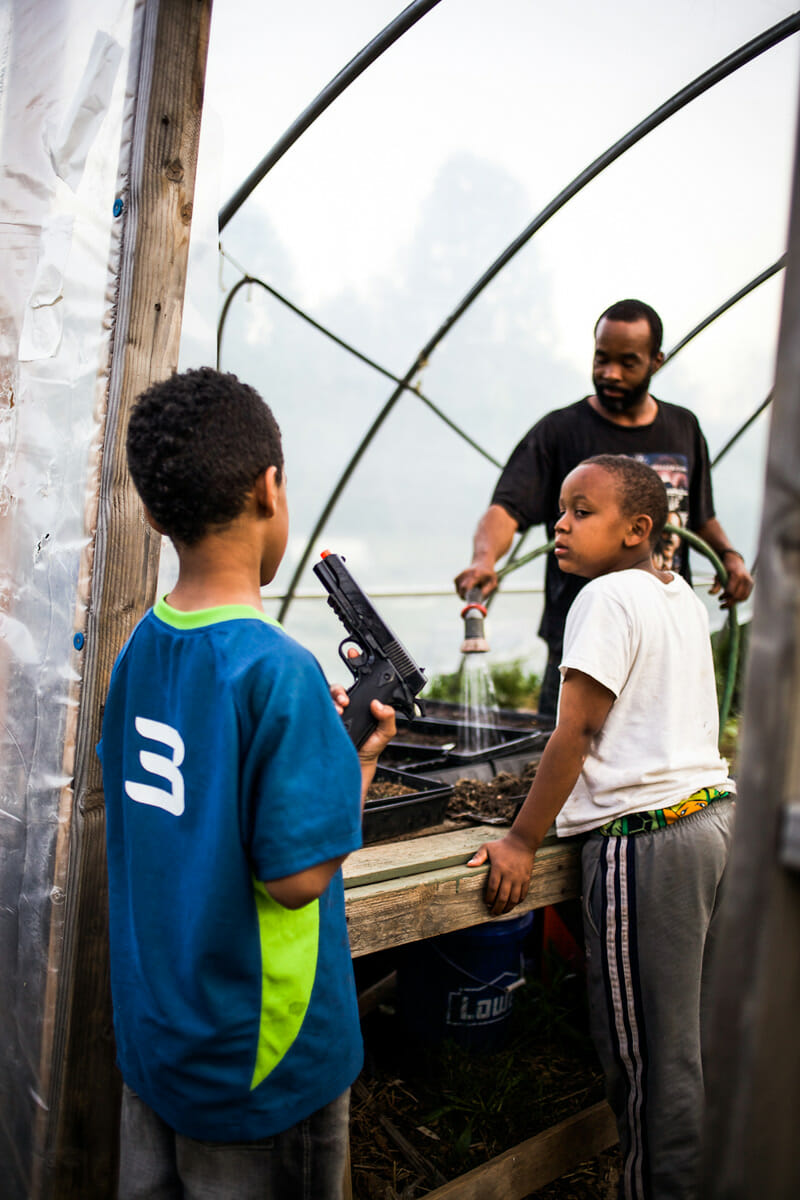 A boy holds a toy gun while Johnson waters some seeds in the greenhouse. The garden gives children a safe place to play where they can be around positive influences. “I can give back to my neighborhood, my community,” Johnson says, “whether it be [with] food or just a little bit of education.” 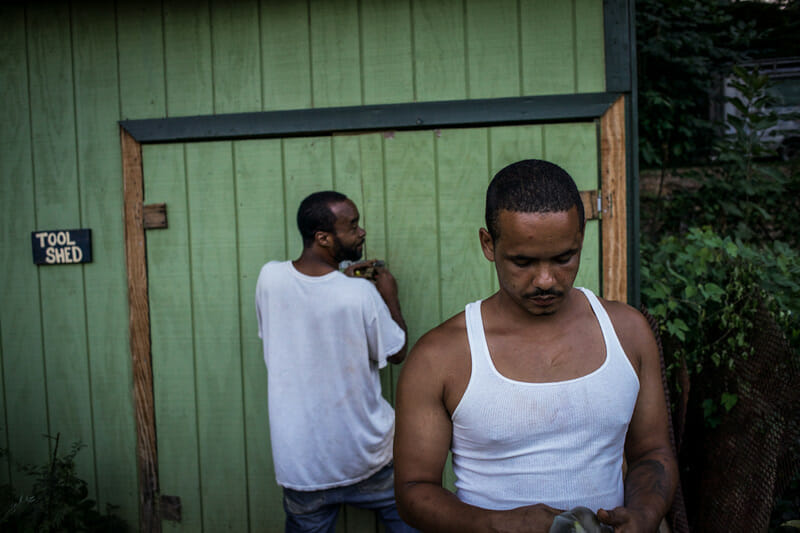 Johnson and Gardner lock up the toolshed for the night. 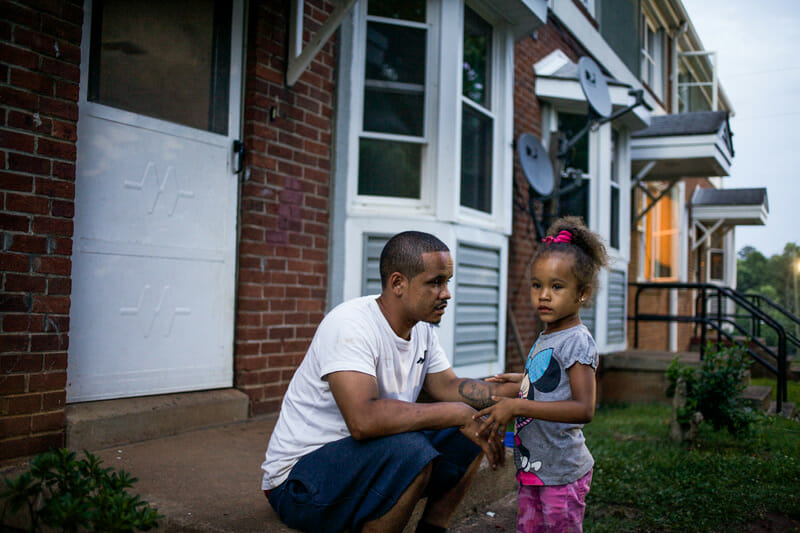 Gardner spends time with his daughter on his front porch. 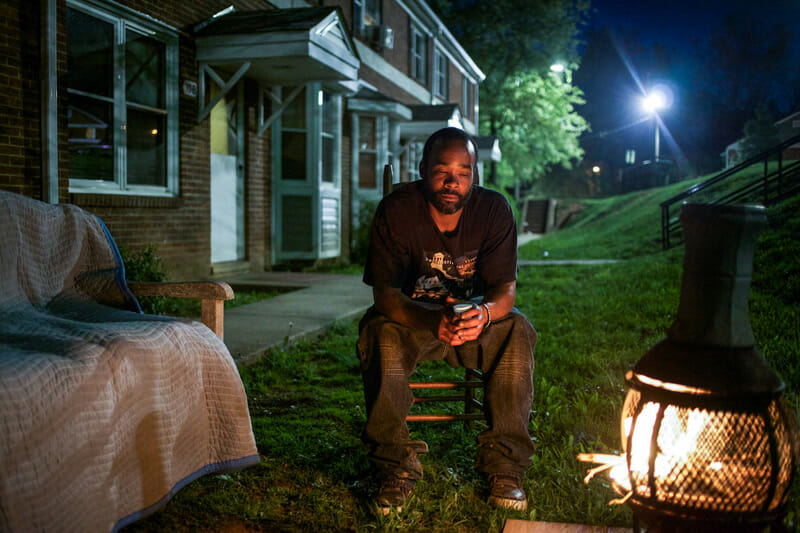 Johnson sits outside a friend’s apartment after a hard day’s work in the garden. 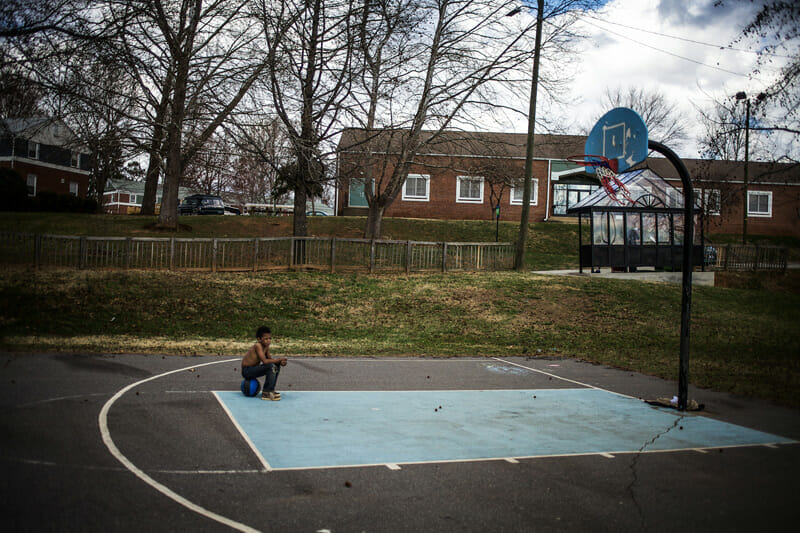 A boy from the neighborhood sits on a basketball adjacent to the garden.