All Hail the Disgusting, Delicious Durian 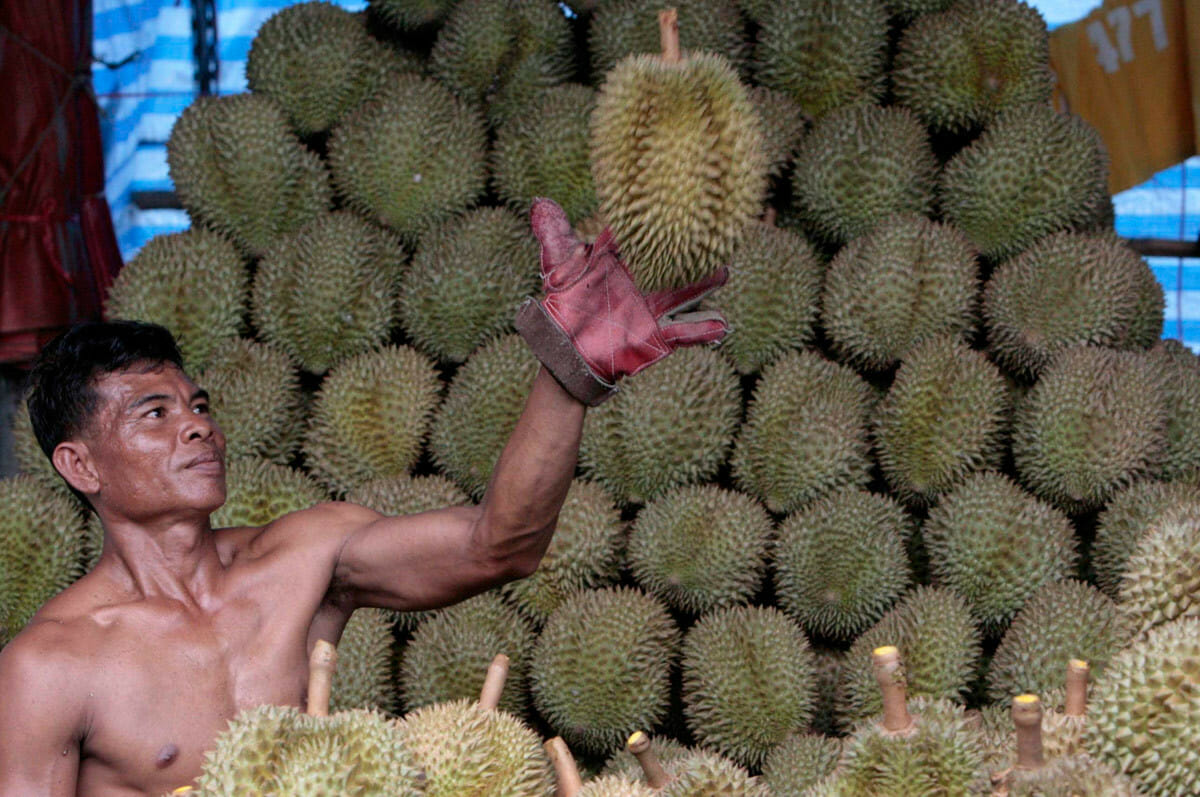 This praise for durians from 19th century travel writer Bayard Taylor sums up the complicated feelings the fruit can cause — it’s stinky and confusing and beloved by many.

About that odor. Hot poop garbage, wet sock, rotten road kill, nasty dead fish, rotten onions, dead rat, fart — these are just some descriptions of the smell. Not to mention that fresh durians cause bad breath and may cause issues if you’re using a shared bathroom. These characteristics divide world populations into two groups: pro-durian and anti-durian.

For many in the first group, their love for durian is natural. The sweetness and the silky flesh — though haters say that part reminds them of rotten bananas — are love at first bite. But for some more reluctant souls, their fondness for this thorny fruit results from durian lovers trying to convince them to try it. Eventually, they just stop resisting.

Due to its notorious reputation, convincing someone to try this stinky fruit isn’t as easy as saying, “Hey, it smells like shit, but it tastes like heaven. Try it and you’ll love it!” When the expensive Musang King Durian from Malaysia hit supermarkets in Britain for the first time last year, U.K. Master Chef winner (and durian fan) Tim Anderson predicted that it wouldn’t catch on in his country — he was right.

Durian may be one of very few fruits in this world with instructions on how to befriend it. Last year Mark Weins published a post on his blog Migrationology, called How to Love Durian on Your First Bite (Or Increase Your Chances). The tips were written by guest blogger Lindsay Gasik, who runs the popular site Year of the Durian. Gasik’s tips include her serious caution for the first-time eater to NOT start with overripe durian because “it will taste like B.O. and vinegar.” Her suggestions for choosing the right durian based on personal preferences actually reminds us of our “Which farm animal is right for you?” series (though we believe that most farm animals are less stinky than durians).

Creating menu items is another way to gain new durian fans, especially big crowd pleasers. There’s durian ice cream, cake, shakes and biscuits. Or how about crÁ¨me brÁ»lée? When Chung Daming launched his new creation Durian CrÁ¨me BrÁ»lée in 2013 in Singapore, it became an instant hit. However, one thing you should know when buying durians in Singapore — you have to be careful where you bring them. Some hotels don’t allow durian on their premises and the fruit is banned on the local mass transit network.

If the taste of the fruit itself isn’t convincing enough, what about sentimental or fun stories about durians?

Last December, three college seniors in Singapore launched the website Thorns and Beyond as part of their final project. The goal was to raise awareness and show the historical importance of the prickly fruit. They staged a three-month campaign based on the idea that everyone has a durian story to tell. The team shot videos, then posted them on their Facebook page. Stories include a woman whose cat loves eating durians and a man whose durian-related job is always apparent to strangers (his car reeks).

Contrary to today’s perception, durian was once deemed “a social fruit.” Instead of buying it from stores then eating it at home (hiding it from family members in some cases,) older generations of southeast Asians used to eat it right away. They often ate in front of the vendors who would provide a peeling service for free. It was an act of eating together, sometime sharing their thoughts on the curious fruit. They were having conversations.

And whenever there was a durian gathering like this, no one would complain about the smell.