Cattle ticks, and the government cowboys who set out to eradicate them. 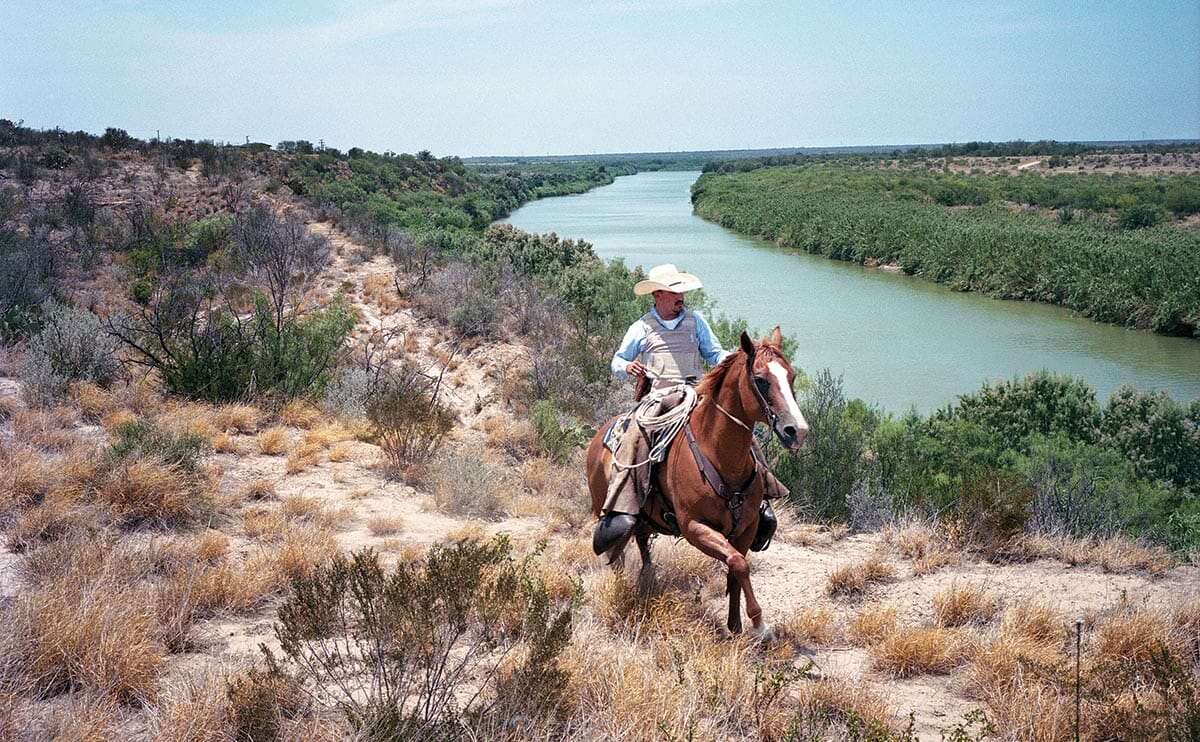 Michael Bolfing is one of the only cowboys in the world who will retire with a government pension – that is, if he retires. “Most guys don’t retire, they just die,” he says of the other employees of the United States Cattle Fever Tick Eradication Program. Bolfing is tall and thin, with short-cropped hair and a Texas drawl. His horse is a companion, not a pet. When Bolfing is asked its name he says, “It’s got a lot, but you probably can’t write any of them down.”

“Tick riders” are saving the United States an estimated $1 billion every year by keeping a worldwide scourge out of the country: Rhipicephalus (Boophilus) microplus and its cousin, R.(B.) annulatus, otherwise known as two species of cattle fever ticks.

These are no mere pests. They transmit parasites that can kill cattle in a week; they can also suck a herd dry, cutting the weight of a steer by 20 percent in a year. Cattle ticks drastically reduce meat and milk production, and trash leather quality.

In short, they have the capacity to decimate the Texas cattle industry, but haven’t, largely thanks to cowboys like Bolfing. Monday to Friday, he rides the Rio Grande, looking for stray cows and horses from Mexico that might be ferrying cattle ticks across the border.

In 1906, the U.S. went to war on cattle ticks. The government created the tick rider program, and by 1943, cattle ticks were declared eradicated everywhere but the permanent quarantine zone – an 800-kilometer strip along the Rio Grande that ranges from a few hundred yards to a few miles across. Before any animals can leave the buffer, they have to be checked for ticks and dunked in pesticides. The U.S. is the only country that has waged a successful battle against the ticks so far. Now, just 68 tick riders hold the line against invasion.

Despite the many precautions, outbreaks happen. During the last major flare-up in 2007, 1.5 million acres beyond the permanent buffer zone were quarantined. Affected ranchers across South Texas dipped their animals regularly for months at a time or rotated pastures to starve the ticks. Today, there are still 35,000 acres of quarantined ranch land beyond the permanent buffer.

Any cattle that come into the U.S. go through a strict inspection. If one animal has cattle ticks, the whole herd is sent back. Clean cows are “dipped”: dunked horn-to-tail in a deep vat of tickicide. But scientists have found ticks resistant to major classes of pesticides in Mexico and around the world.

‘Tick riders’ are saving the United States an estimated $1 billion every year.

“The problem is, ticks have been around on this planet way before humans. They have a great deal of genetic diversity. If you put them under some selection pressure, life finds a way, like in ‘Jurassic Park,’” says Adalberto Pérez de LeÁ³n, director of the USDA’s Livestock Insects Research Laboratory.

In the U.S., cattle tick populations boom and bust in 30-year cycles, but as the planet heats up, the warmth-loving parasites find more habitable land with each cycle. During the 2007 outbreak, ticks were found up to 250 miles away from the quarantine zone. By 2050, climate models suggest the entire southern U.S. will be at high risk for infestation. All you have to do is look at the rest of the world to know this could spell big trouble for the U.S. cattle industry. “As a society, we lose memory of how it was when we had ticks here and the disease was preventing us from reaching our full economic potential,” Pérez de LeÁ³n says.

These pests have invaded every continent with a tropical and warm temperate climate, including Australia, Africa, and Central and South America, spreading disease and slashing productivity. The consequences are dire: Cattle ticks cost Brazil, with the largest commercial herd of cattle in the world, an estimated $3 billion annually in lost productivity and unsuccessful attempts to fight the pests. Maxime Madder, a Belgian researcher who studies the tick in Africa, completed a survey of cattle in Benin a few years ago and found that half had at least one of the parasites that cause cattle fever, and ticks themselves were rampant. Madder has seen desperate cattle farmers dip their animals in everything from sea water to motor oil in vain attempts to strip the ticks away. 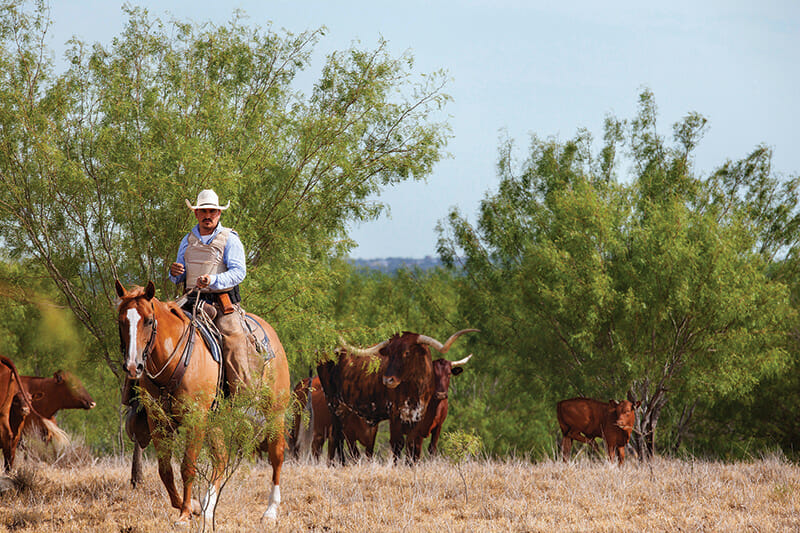 Flores patrols for stray livestock on a private ranch near the Rio Grande outside of Laredo, TX.

The poor are hit worst: In CÁ´te d’Ivoire, a development project shut its doors after nearly all the dairy cows they distributed to small farmers died, likely of tick-borne illness. Because so many African cattle owners are subsistence farmers, lost productivity associated with cattle ticks could threaten food security across the continent.

R. microplus is the most invasive of any tick species on cattle. Its larvae are almost too small to see, and they attach in such density there may be thousands of ticks on an infested animal, so thick they look like scales. Females lay up to 2,500 eggs, far more than the native ticks they often displace. Combine its fortitude with new weaknesses along the Texas border, and the potential for disaster emerges.

Among the most mobile vectors for cattle ticks are white-tailed deer, a growing population that bounds across the Rio Grande with ticks in tow. While white-tailed deer can’t catch cattle fever, nilgai, a 600-pound Indian antelope, can spread both ticks and the pathogen that leads to cattle fever. First imported by hunting ranches along the border, nilgai now run wild in parts of South Texas.

Another major risk for outbreaks are stray Mexican cattle in southwest Texas, spurred on by the drug war. Faced with border violence, many Mexican ranchers abandon their land and animals. So far this year, riders like Bolfing have caught 200 Mexican cows that wandered across the river and into U.S. ranch land. 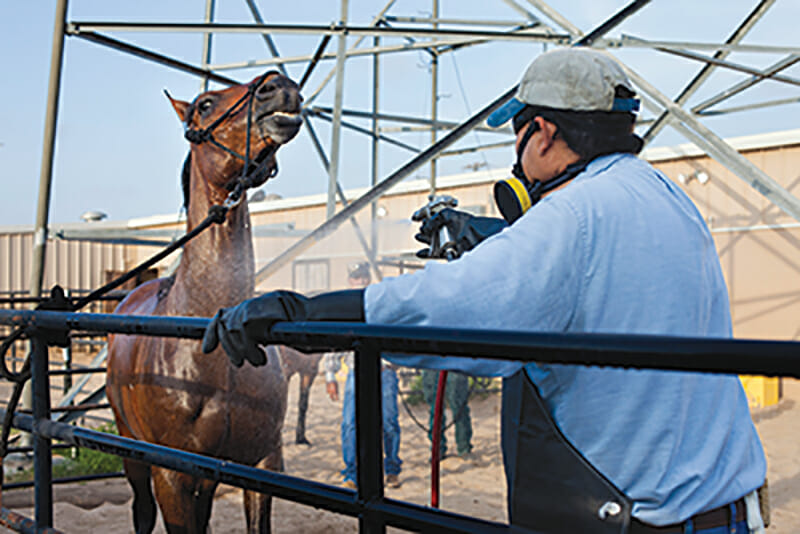 But animals aren’t the only invasive species that help the ticks spread. Giant reed – or Carrizo cane, as the tick riders call it – was originally introduced by the Spaniards for roof thatching, and it grows up along the banks of the Rio Grande, creating a cool, moist climate perfect for ticks and inhospitable for their predators. As Bolfing rides along the river, the cane reaches above his hat – and that’s after being hacked back just weeks before.

Two hours southeast of Laredo, where Bolfing rides, in the very tip of the Texas boot heel, John Goolsby runs a cattle tick research lab on the decommissioned Moore Airbase, a thousand-acre sweep home to many USDA projects. He and his team study everything about the tick, from its interaction with weeds to a vaccine that makes the animals’ immune systems fight off the ticks. They’ve found and introduced a plant-feeding wasp that weakens the giant reed and allows native plants to regrow. More biological controls are in the works.’ There have been a few commercially available vaccines to kill cattle ticks in the past, but each had limited efficacy and required repeated injections throughout the year, an expensive proposition for many ranchers. So there’s an international effort to find a cocktail that will knock the tick back. John Goolsby’s lab is ramping up for a big test of a new vaccine for cattle, and they’re currently developing one for wild deer that can be distributed in a biscuit.

“This vaccine is pretty neat,” Goolsby says, adding that there’s still “a long ways to go. We’d like to have a perfect vaccine for the tick.”

For now, the country’s best defense against the bloodsuckers are 68 cowboys and their horses.