On Staging ‘King Lear’ with Sheep

King Lear with Sheep stars one man and eight sheep. Understandably the play is not a straightforward replica of the original Shakespeare (even without the addition of the animals), and focuses on the efforts of a stubborn director to persuade his all-sheep cast to perform King Lear. As you would expect, they remain silent. The […] 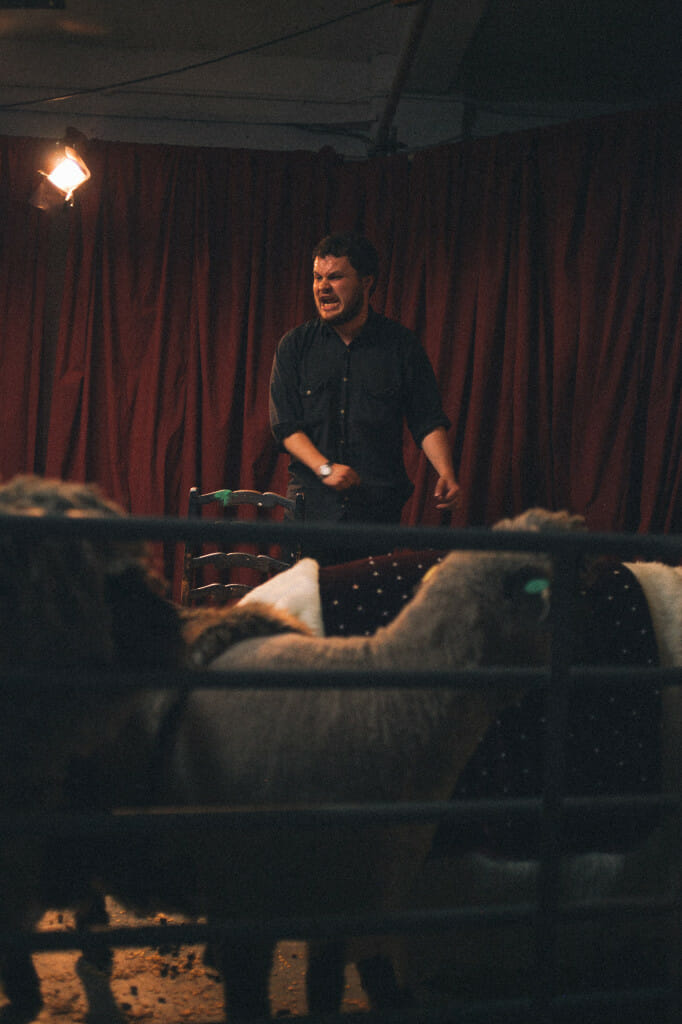 King Lear with Sheep stars one man and eight sheep.

Understandably the play is not a straightforward replica of the original Shakespeare (even without the addition of the animals), and focuses on the efforts of a stubborn director to persuade his all-sheep cast to perform King Lear.

As you would expect, they remain silent.

The director interprets this as mutiny and comes to loathe his troupe; their unwillingness to perform the roles he expects of them precipitates his nervous breakdown, and his fall mirrors the fall of Lear himself. King Lear with Sheep is an experimental re-evaluation that overturns theatrical conventions through the startling and revolutionary device of costumed sheep.

When we set out we were sheep-innocents and we expected to need a total of one full-cast rehearsal. But for both Alasdair (who plays the director) and for the benefit of our sheep, we ended up cycling down to the farm every week. The sheep learnt to trust his smell, and he got used to improvising around and within their woolly Brownian motion – including their tendency to buck happily when playing dead. He also became surprisingly deft at catching the Cordelia-sheep.

For all its intentionality, the element of unpredictability introduced by the sheep still freaks out both Heather (the director) and Alasdair. 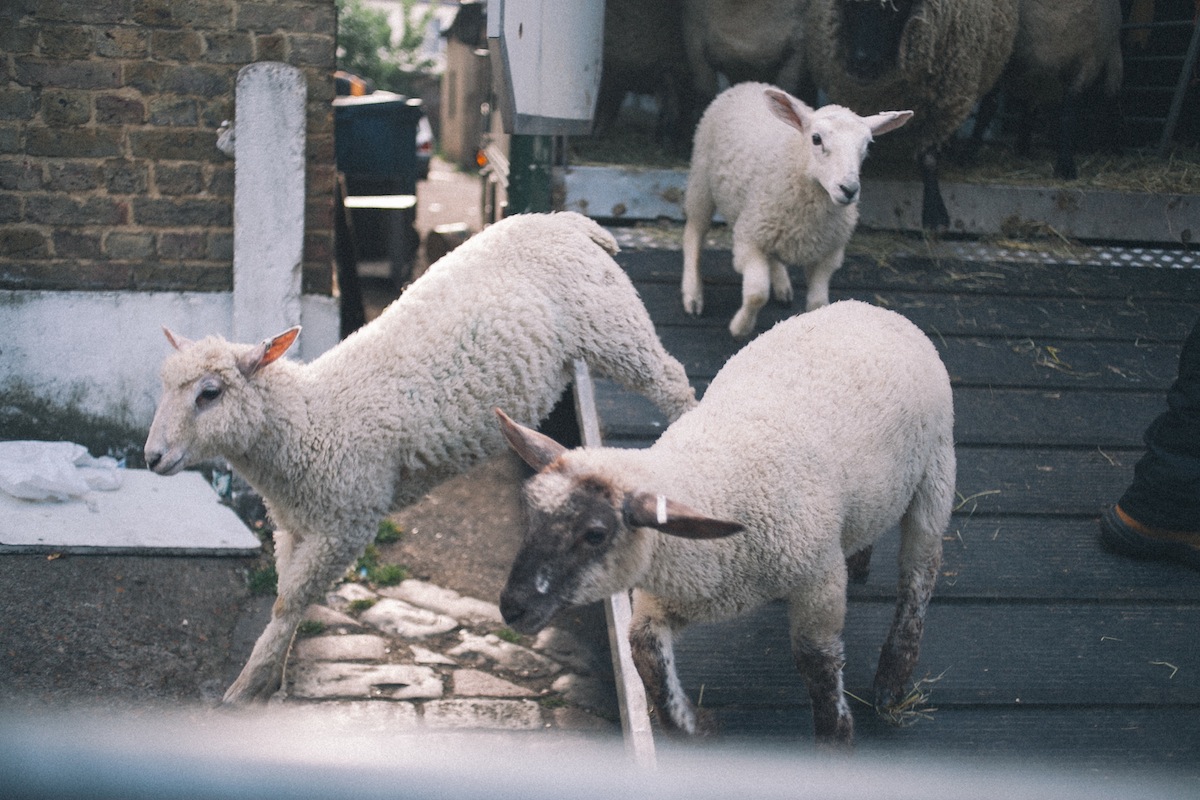 The play was performed at the DIG warehouse on June 14th, and the ewes on the Surrey Docks Farm (from which the sheep were loaned) were giving birth throughout the rehearsal period, after which they have to be shorn to prevent flystrike; two somewhat domestic procedures that substantially changed the appearances and size of our cast. After one rehearsal, Josh ”“ the mobile farm worker who drives the animals around schools in London and escorted them to the performance ”“ took us to see the newborn lambs trying their legs out for size. These lambs, like Cordelia, Goneril, and Regan, are serene bottlefeds, and the habit of facing schoolchildren has made them into unflappable actors.

One ewe is markedly fatter than the others because she isn’t allowed to breed (she unconsciously crushed her last lamb in a painful prolapse) and so is able to keep her fleece for the show. Her stature was the first reason why we chose her to play Lear and her unwitting infanticide an unexpected irony. Kent and Gloucester were only cast in our final week of rehearsal when two biggish sheep turned out not to be pregnant (it happens when one ram is called on to fertilize sixty ewes) and so weren’t shorn either, leaving them in a state of old-world dishevelment. 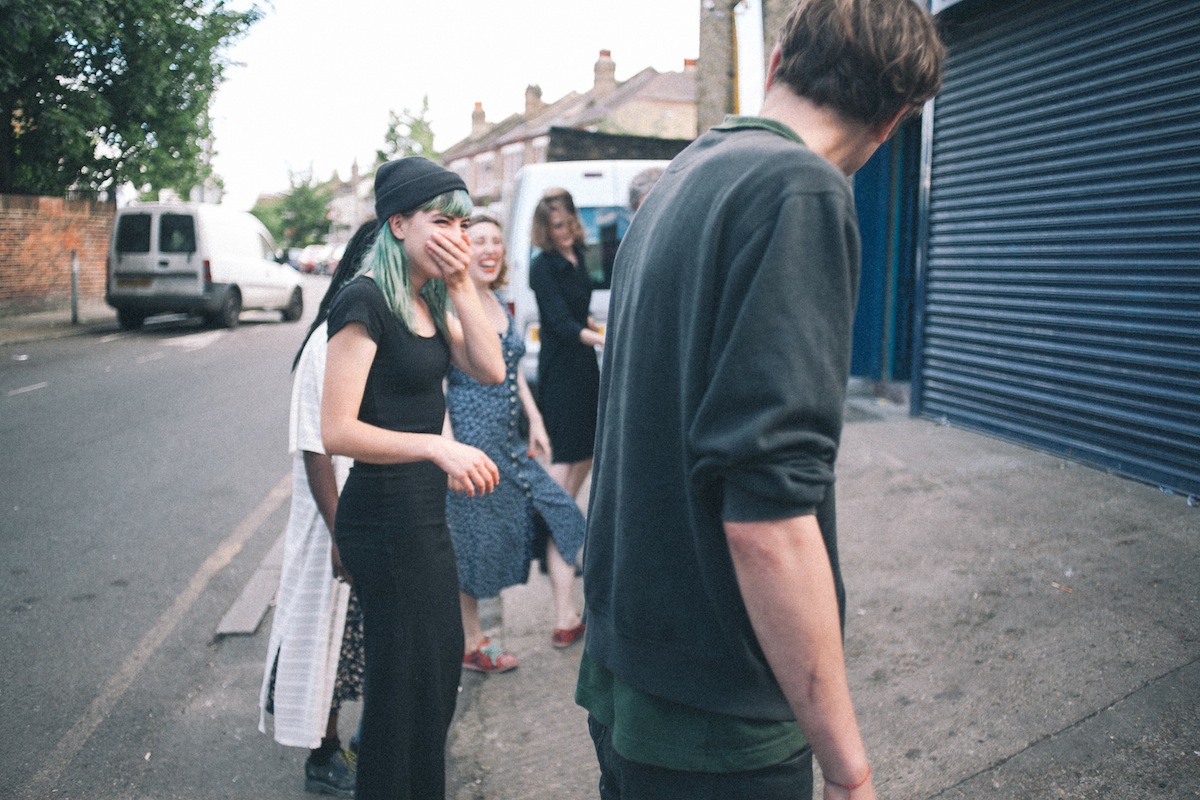 When putting on a play a considerable portion of time goes into negotiating with actors, resolving the most ridiculous of quarrels, mending costumes, etc. Farm animals are held up as the epitome of narrow-minded uncooperativeness ”“ think of “bull-” or “pigheaded”, of “mulish”, and “doggish” ”“ and our actors, the topknotted, meaty Oxford Downs are obligingly difficult to rally up (though they move as a pack, it’s often away from people). When the director blames the Cordelia-sheep for her self-centeredness and for turning the cast against him, alluding to “Her messes! Her constant tantrums!” and “her method acting”, the sheep bleats and ignores him with stoic dignity. The director’s unfairness (and later, Lear’s) is underscored by the fact Cordelia is played by a particularly graceful and docile Ryeland cross, a breed that makes excellent mothers, and ”“ let’s assume ”“ correspondingly loving daughters. It’s not her fault that she can’t talk. 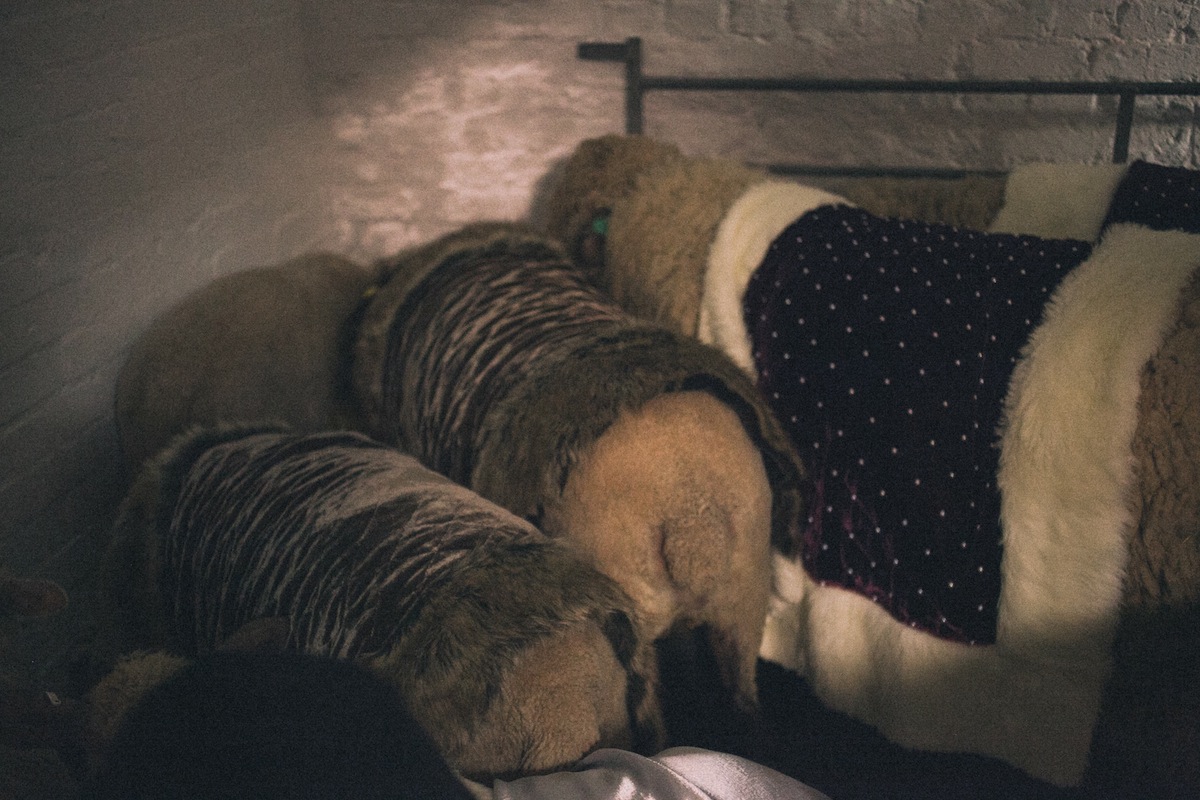 Silence was a big deal in 20th century theatre. Throughout his plays, Samuel Beckett questions the capacity of performance to satisfy an audience and presents us with a host of reluctant actors, aware that they have a responsibility to entertain and yet unwilling to deliver this entertainment. King Lear with Sheep takes this a step further ”“ the actors are actually incapable of acting or even recognizing that something is expected of them. In this way they are extreme metaphors for Cordelia’s inability to participate in the courtly games of her family. Cordelia’s refusal to speak in Shakespeare’s King Lear is expanded into the implacable silence of the sheep in King Lear with Sheep. 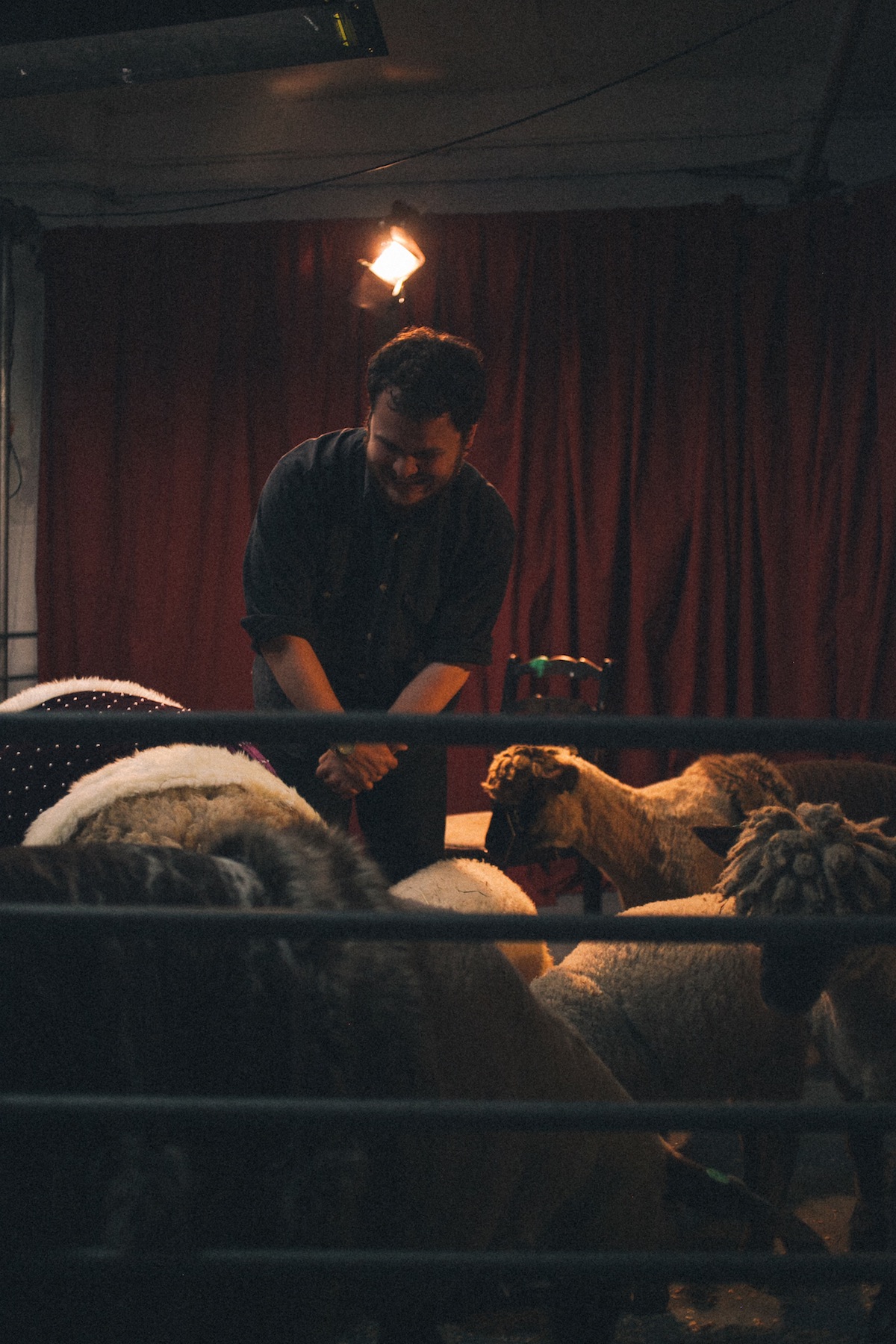 King Lear is, of course, a tragedy. Cordelia dies. In regular performances, much of the tragedy of this moment comes from Lear’s wretched insistence that Cordelia is still alive. We empathize with the simple need for things to simply beother than they are, even as we’re aware ”“ at least partly ”“ of our own dual knowledge: that the actor playing Cordelia is actually alive. 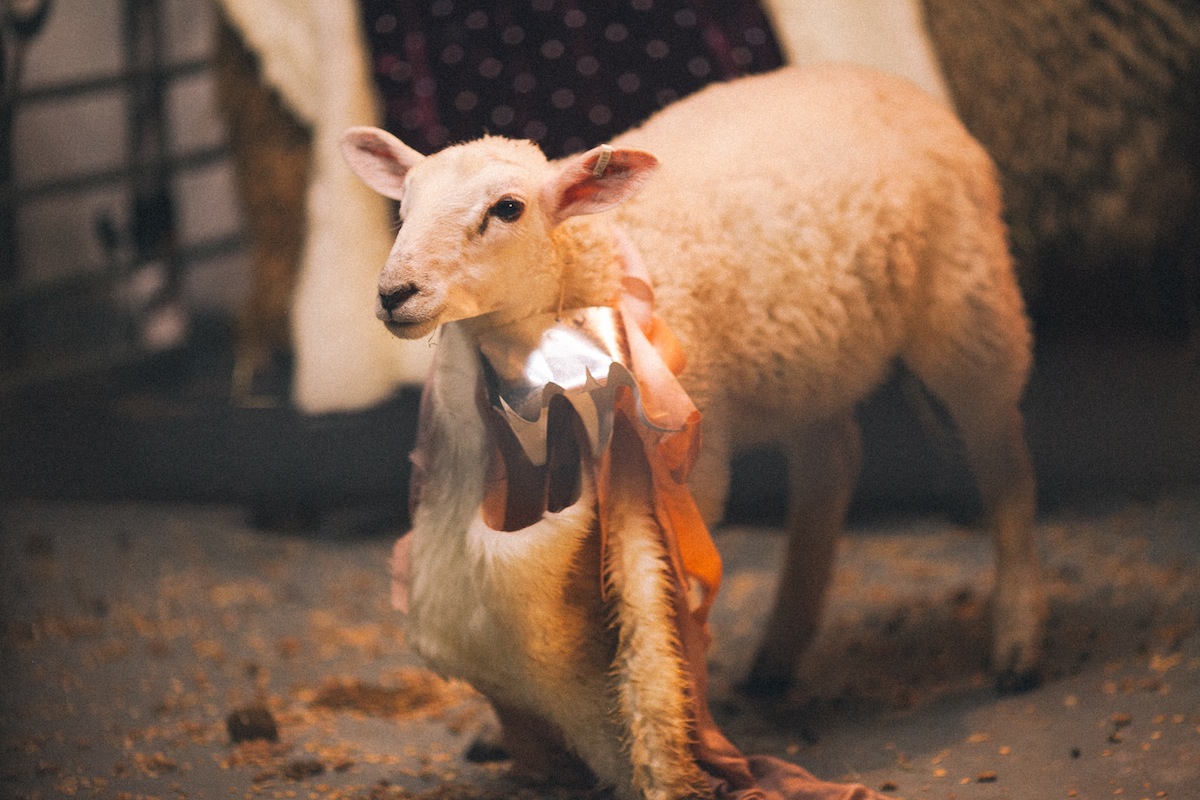 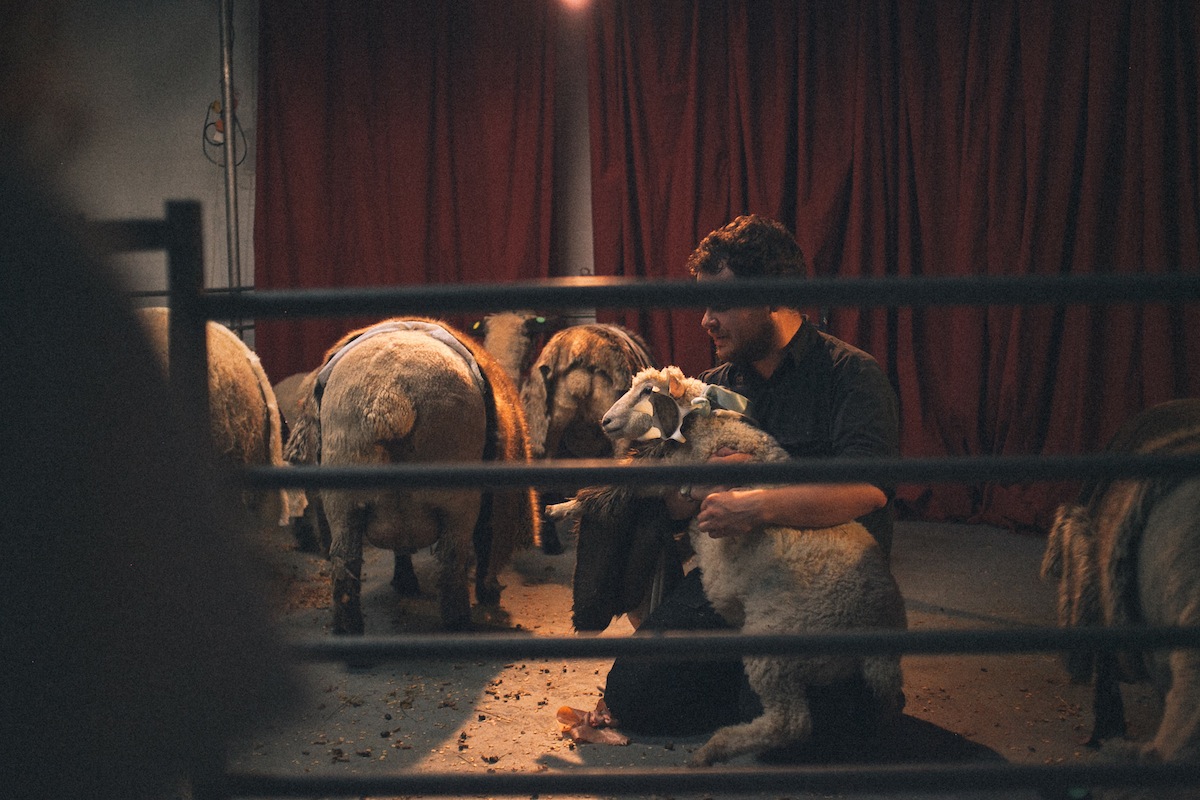 In King Lear with Sheep this disjunction between what we know and we believe is more than apparent ”“ it’s unavoidable. A struggling sheep is not subtle and so Cordelia-sheep’s tragic death is less believable. She bleats angrily, the director weeps, and the final moments of the play waver between genuine tragedy and something rather funny.