Are coyotes stealing your sheep? Maybe you need a guard donkey. 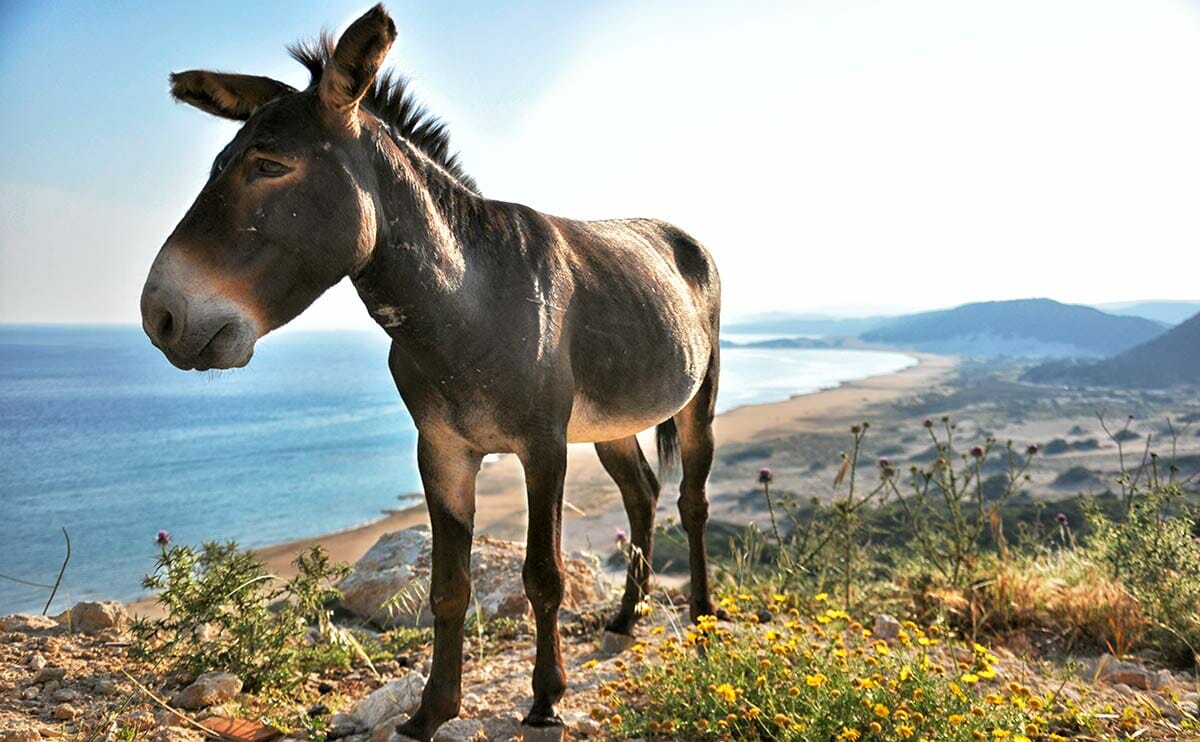 Although often portrayed as moody and difficult to work with, donkeys, if trained right, can be loyal and effective farm hands that are naturally inclined to not only herd but also protect sheep and goats from predators such as coyotes and roaming dogs.

Jan Dohner, author of “Livestock Guardians: Using Dogs, Donkeys and Llamas to Protect Your Herd,” and several other articles about guardian donkeys, says these equines make great livestock protectors but are quite different than your standard farm dog.

‘Donkeys can’t handle the same predators as dogs, but they also won’t keep you up all night barking.’

“Donkeys can’t handle the same predators as dogs and they won’t protect your farm against small pests like raccoons or birds, but they also won’t keep you up all night barking,” she says.

Like most guardian animals, it is best to raise donkeys with the herd they’ll be protecting while they are young. Although jennies (female donkeys) or gelded males can be introduced to a herd as grown animals, foals that grow up with their flock will be natural leaders and protectors.

Donkeys are territorial animals and are not necessarily protective of the herd as much as they are protective of their territory and themselves. They do not patrol the pasture but rather feed and socialize with the stock until a threat appears. With their large ears and a wide range of vision, donkeys are alert while grazing yet are less spooky and skittish than horses, making them more likely to stand their ground and confront a threat. 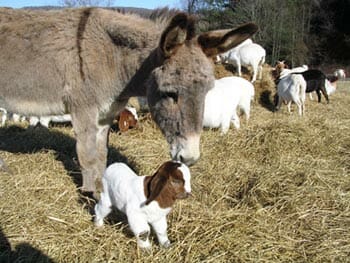 Farm security checks on the newest edition to the herd. Photo courtesy of John Genho.

Dohner says donkeys are instinctually aggressive toward canines, and are capable of dishing out crushing blows with both their front and hind legs as well as using their large teeth to bite raiding intruders. However, they cannot handle multiple canine attackers or larger predators like mountain lions, wild hogs or bears, and will rarely notify the farmer of any problems in the pasture — although their loud braying may indicate potential invasions.

Although not very popular with larger commercial farms, Dohner says donkeys are a good alternative for hobby farms or those who operate their business out of their farm.

“For people who aren’t comfortable with big, aggressive guard dogs, donkeys are a good option, they offer more protection against predators than llamas and are better with visitors or customers than dogs.”

However, not every donkey will make a suitable guardian for your farm. Jacks, or intact male donkeys, are generally too rough with sheep and may harm or even kill livestock. Similarly donkeys with no prior contact with livestock may act aggressively when placed in the same pasture.

Kim Barnes, operations manager at The Donkey Sanctuary of Canada, works with donkeys everyday and cautions that farmers who choose to use donkeys as livestock guardians need to know how to both handle and take proper care of them.

‘Donkeys are loyal, affectionate and great at what they do, but they are not just a piece of equipment.’

“Donkeys are loyal, affectionate and great at what they do, but they are not just a piece of equipment,” she says. “There is no reason they cannot be great guardians, but people thinking about getting a donkey for this reason need to do the research.”

So next time you see a donkey lazily grazing in the sun, remember, that’s no Eeyore moping around the pasture, it could very well be farm security, in which case you better watch out because you do not want to be on the receiving end of a donkey kick.

Hai sir am from India Tamilnadu I would like to shelter donkeys in the southern part of the country . What should be the next step I take before proceeding to adopt them

How about Donkeys with Geese. Coyotes have come over my 6 foot wall over and over to devestate my flock of Adult Geese killing half of them over the last couple months.

Hello my name is gavin I own a small goat farm . I have two gaurd donkeys that stay with my goats , since I have bought them I have not lost one goat adult or kid to predators !!!! I have had them for a year now both donkeys was 9 months old when I got them on 3 different occasions I have found them playing with dead coyotes they pick them up and pack them around like a toy lol.also my nieghbors pesky dogs don’t come around anymore to chase my heard . My farm is just north… Read more »

Bought one today for my small cow herd.

1
Reply
17 Ways To Protect Your Chickens From Predators

[…] donkeys and guinea hens. Guinea hens create quite a racket when any creature comes in your yard. Donkeys are naturally aggressive towards canines, and may offer protection for your homestead against […]

Can a standard donkey be a guardian for miniature donkeys?

In the past month I acquired a flock of 7 dairy ewes and 1 Nubian dairy goat. I already had my mini donkey (intact male) who was used to my flock of wool sheep before I sold them. He has taken to these sheep and goat just fine and everyone seems to be in harmony. I need to breed my goat this fall and want to bring a buck home. I have met this buck and he has the same sweet curious personality as my goat. Do I need to put the buck in a separate pasture from the donkey… Read more »

My neighbor’s animals were separated but someone opened the pasture when they were not supposed to. 4 month old male donkey got out and was attacked today by gelding adult male guard donkey, the adult male picked the baby donkey up by his neck with his teeth and shook him. Baby donkey has weakness in the neck muscles, trouble raising his head, and lack of sensation in the front legs, his ankles buckle slightly when standing. He is able to stand but motor control is affected in the front legs. I am suspecting a cervical nerve root injury affecting the… Read more »