Hair of the Dog: Wear Your Best Friend

Move over, sheep. Adios, alpacas. You don't need a pasture or hay to make soft, lovely yarn. You just need a dog. 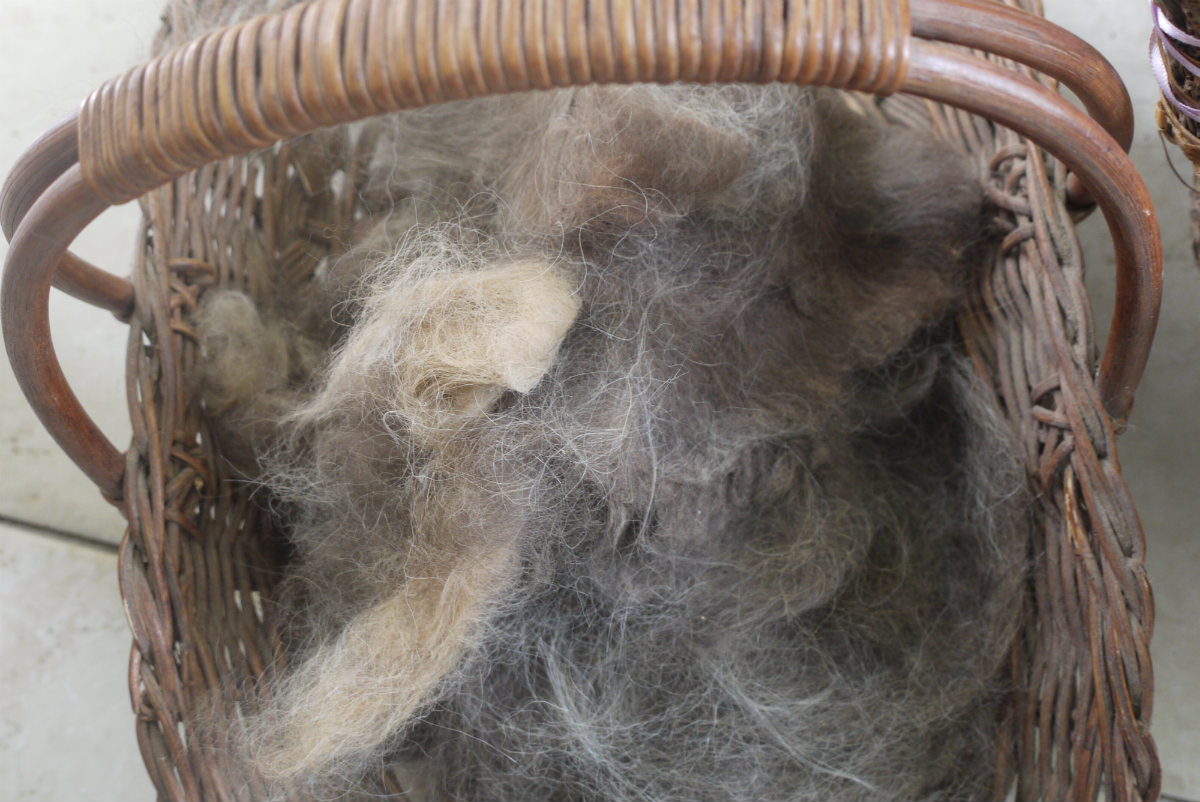 Clothing and other items made from dog hair, sometimes referred to as chiengora (chien is French for “dog”), isn’t a new niche fad – in fact, it’s been around for centuries. The Salish, indigenous North Americans who lived in the Pacific Northwest, were known for making blankets from dog hair. Nowadays, considered a luxury fiber by those who spin it, dog hair has yet to make waves on the commercial market. Instead, commission-based spinners craft individual keepsakes as long as you supply the hair.

Most spinners working with dog hair were lured into the craft by their interest in spinning and the convenience of having their own (hairy) dogs. Such was the case with Doreen Kelly, of West Seneca, N.Y. A spinner for 12 years, Kelly has two Collies and “an endless amount of dog hair,” she says. 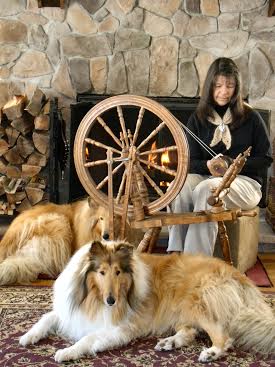 The so-called “double coated” breeds of dog are the best for making yarn. Breeds like the Collie, Old English Sheepdog, Burmese Mountain Dog, Samoyed and Golden Retriever have a dense, soft, insulating undercoat beneath their water-propelling outer coat made of stiff and much thicker guard hairs. The undercoat is mostly what is naturally shed, ends up on your couch, and can be turned into items such as mittens, scarves, pillows and blankets.

Is there a dog breed above all others that makes the best hair for spinning? It doesn’t seem so, although everyone has her favorite. Patty Kruthers, a spinner from Bethlehem, Pa., once had a Briard named Britty who was her inspiration to knit dog hair. “Briard hair is primo to spin,” Kruthers says. But with commission work, other breeds are showcased, too. “Samoyeds make particularly nice yarn,” she says. “It’s a nice length and it’s not pure white; there’s a lot of variation in the color that you don’t really notice until you spin it. It’s a beautiful yarn.”

Of course, even variations in coat quality within a breed can make a difference. “Between my two Collies, my female has a very soft coat but the male has much coarser hair,” Kelly says. “Like people – some have very fine hair, others very coarse.”

Structure influences function and with fiber it’s no different. Sheep wool is known for its stretch and shrinkage, which is due to the natural crimp of each individual fiber as well as the presence of microscopic barbs. “The reason wool shrinks is because those little barbs that are on the hair catch on each other and keep catching. That’s why the item seems to get smaller and smaller,” Kelly says.

Dog hair can be up to eight times warmer than sheep wool.

In contrast, dog hairs have neither crimp nor barbs, which means no stretch and no shrinkage. However, you may not want grandma to re-knit you that sweater a la Fido just yet – dog hair can be up to eight times warmer than sheep wool. “Dog hairs have a hollow core that acts like insulation,” Kelly says. “If you wanted to make a sweater with all dog hair, it would be really, really hot to wear.”

Spinners describe the care of dog hair items as similar to things made of wool. “I wash dog hair the same way I would wool,” says Kruthers. “You treat it like you would any good wool garment.”

Another striking element to knitted dog hair is its halo, a knitting term for the soft fuzz that outlines an item. Angora rabbit fur has a similar feature, which adds to softness and is considered luxurious. Many spinners liken dog hair to Angora rabbit. “If you held an item made of dog hair up to the light, you would see this beautiful fuzz that sticks out,” Kelly says. This halo also adds to dog hair’s warmth. 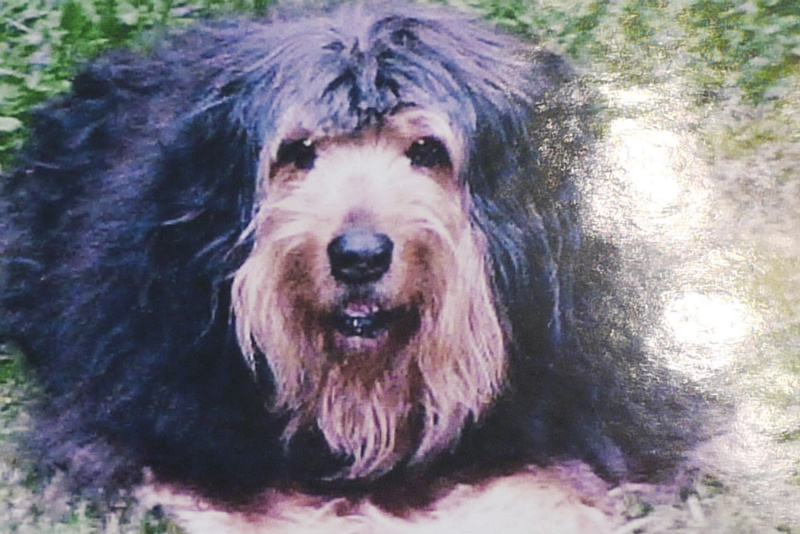 It doesn’t take too much dog hair to make a small item. “If you have a brown paper grocery bag full of dog hair, that would probably be enough to knit a scarf,” Kelly says. “That would be about six ounces.”

One serious grooming session with a brush – or vacuum behind the couch – may be enough to make those mittens you’ve always wanted but spinners warn not to use hair shaved from a dog. “When you clip, you get stubble along with the long hairs,” says Betty Kirk, who teaches classes on different types of spinning and weaving in Lemont, Illinois.

Perhaps part of the reason dog hair may never be mainstream is a certain reaction to having a clothing item made from dog hair.

Fiber length influences the strength of the yarn being made. Dog hair about two inches in length is ideal for spinning. “If the length of the hair particles is too short, it ends up being a very weak yarn,” Kruthers says. “The longer the hair is, the stronger the yarn you will make.”

Individuals interested in an item made from their dog’s hair can mail the hair to spinners who will then clean the hair, spin it to make yarn, and then knit the yarn into a final product.

“People like it as a memento,” Kirk says. “Sometimes I’ll get a panic email saying someone’s dog just died.”

As for what the future holds for the chiengora enthusiasts, it seems it will stay a niche market. “I think it’s a thing, just not a big thing,” Kirk says. “Like, don’t dump your whole inheritance into it because you won’t become rich doing this. But, you’ll always have a little niche.”

Perhaps part of the reason dog hair may never be mainstream is a certain reaction to having a clothing item made from dog hair. “Usually people think it’s pretty cool,” Kirk says. “But once in a while they think it’s gross. You can just point out that your silk blouse is made from worm spit. I’d rather have dog hair.”

Part of the stigma is from the incorrect assumption that something made from dog hair will therefore smell like a dog. “People don’t understand that if you have a wool sweater, when it gets wet, it smells like wool, not like the sheep in the barnyard,” Kirk says. Likewise, wet yarn from dog hair smells like wet yarn, not like wet dog.

“I just think it’s cool because it’s such an odd thing,” Kruthers says. “My dog Britty may be long gone, but her garments live on. Everyone has too much dog hair lying around anyway. It’s very comfortable and very pretty.”

This sort of thing might make one wonder what else out there could be spun. Domestic cat hair reportedly can be used, but what about something more exotic?

“I’ve spun a lion’s mane,” Kelly says. “It was from a circus and someone wanted to make bracelets for the employees. That was pretty neat.”

Is there a person someone can recommend me to? I would like to send my dog’s hair to get it cleaned and spun professionally. I’m not exactly sure where to look. I’ve been saving it for a while now and would really like to use it for winter attire.

Thank you in advance for any information!

I’m interested in learning to spin then knit my samoyed’s hair.

I have two standard poodles. One is white w very dense curly hair and the black female has silkier straighter hair. Will poodle hair work well for spinning? Could you blend it for a grey color variegated yarn?
Thanks!

Does the woman from West Seneca, New York have a contact email?

was wondering if you could spin husky fur into yarn for me to use in knitting and if so what are your prices?

Does anyone know anyone who knows how to s
In dog hair?

My Tibetan Mastiff passed away last month. I saved a kitchen garbage bag size of her fur. I’d love to get it woven into yarn and make a scarf that I can treasure for ever.

I have a german leonberger. What will you charge to make scarf?

Ive made a beautifull poncho out of German Shepard hair mixed with with white shetland , 50/50 , a hat made of my beautifull Alaskan malamute mixed with black shetland