After serving as a popular tourist attraction at the Peabody Hotel in Memphis, five fortunate fowl were sent to retire at the Jack Daniel's Distillery in nearby Lynchburg. 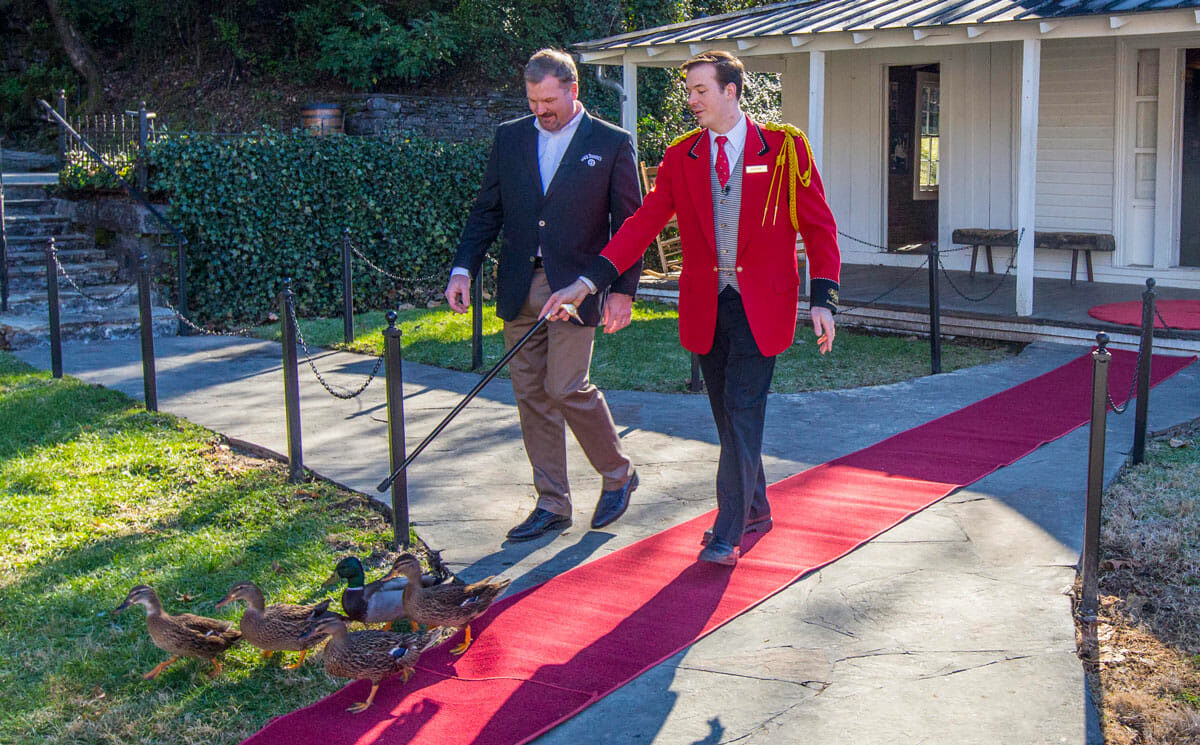 The story goes that after enjoying too much Jack Daniel’s whiskey, the hotel’s general manager and a hunting friend loosed their live decoy ducks in the lobby fountain back in 1933.

These days, the hotel’s flock of one drake and four hens still parades twice daily on a red carpet. Anthony Petrina currently holds the covetable title of Duckmaster, directing the march. Typically, after three months of star treatment the mallards retire to the local farm that sources them.

To make the transfer official, Duckmaster Petrina turned over his flock to Jack Daniel’s master distiller Jeff Arnett in a final parade ceremony.

Typically, that is, until last year, when five fortunate fowl were appropriately sent to the Jack Daniel’s Distillery in nearby Lynchburg. There, they joined a larger flock of Daniel’s ducks, pecking up dropped grain and partaking of the limestone cave spring water also used for the distillery’s world-famous sour mash. To make the transfer official, Duckmaster Petrina turned over his flock to Jack Daniel’s master distiller Jeff Arnett in a final parade ceremony.

By all accounts, the first round of retirees is well-adjusted. “They’ve really integrated well with the ducks already in Lynchburg,” said Jill Meyer, a representative of Jack Daniels. “By now, it’s difficult to tell which duck’s which.”

Though not all animals that live at distilleries arrive as pampered as the Peabody ducks, stories of special brewery and distillery guests aren’t altogether uncommon. Just two years ago, the Chivas Brothers in Dumbarton, Scotland, retired the gaggle of geese they’d bought during the 1950s for security against would-be whiskey burglars. More recently, the Vermont rye whiskey distillery Whistlepig has been raising Mangalista pigs on their farm.

With such stories, we’d almost hope for reincarnation as a Jack Daniel’s duck. But in this life, at least there’s whiskey.

Popular
7 Smokable Plants You Can Grow That Aren’t MarijuanaBrian Barth
How to (Actually) Get Rid of Fruit FliesEmily Baron Cadloff
What to Do With an Abundance of PeppersShelby Vittek
6 Differences Between Llamas and AlpacasAndrew Amelinckx
Yes, the Government Really Does Stash Billions of Pounds of Cheese in...Emily Baron Cadloff
Explore Modern Farmer
Related
Plants
This Seed Detective Travels the World Tracking Down Lost CropsEmily Baron Cadloff
Environment, Plants
Making the Case for IntercroppingShea Swenson
MTMF
Meet the Modern Farmer Helping Immigrant Farmers Sell Their ProduceBridget Shirvell
Food & Drink, Plants
In Awe of the PawpawDanny Childs
wpDiscuz
We use cookies on our website to give you the most relevant experience by remembering your preferences and repeat visits. By clicking “Accept”, you consent to the use of ALL the cookies.
Cookie settings ACCEPT
Privacy & Cookies Policy