Americans have grown to love Nutella. The only problem: they can't grow what they need for it here. 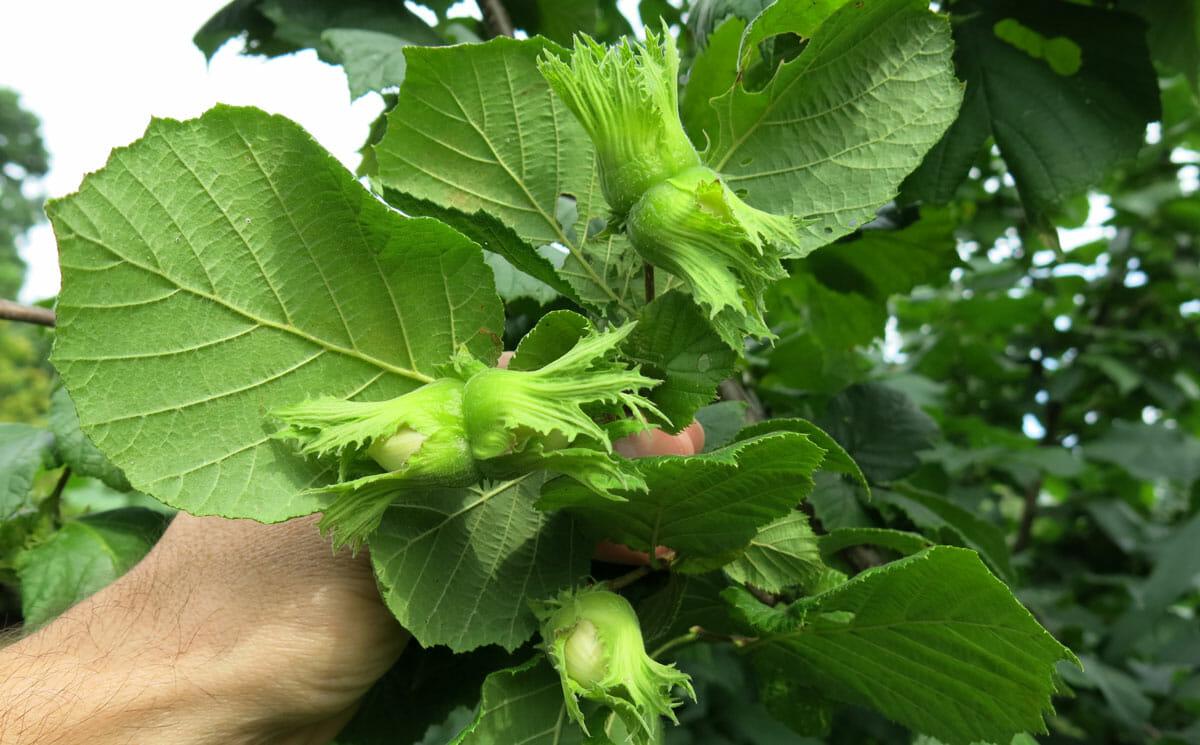 In that decade, Ferraro Rocher’s factory has quadrupled in size and it now processes 24,000 tons of those goodies’ primary ingredient, after chocolate: hazelnuts.

But the company has to buy over 90 percent of its hazelnuts from Europe, because, ever since colonial times, stateside attempts to grow enough hazelnuts to rival European production have failed miserably.

North America has its own hazelnut variety – Corylus Americana. It tastes as good as its European cousin, but is just one-quarter the size, with a thick shell that stays tightly in its husk when mature, compared to European nuts that fall on the ground, says Tom Molnar, associate professor in the Department of Plant biology and Pathology at Rutgers University. Taken together, its characteristics mean that not only do American hazelnut trees produce less than their European relatives, the meat is harder to harvest.

Ambitious hazelnut farmers have repeatedly tried to cultivate the prized European hazelnut (Corylus avellana) on North America’s east coast and met defeat. The trees fall victim to either a slightly-too-cold climate or, most often, an endemic disease called Eastern Filbert Blight (EFB). The blight is caused by a fungus called Anisogramma anomala that naturally occurs on the indigenous American hazelnut, but causes only minor damage. But to nearly all commercially important European hazelnut varieties, it means almost certain death. EFB causes branch die-off and eventual death within 4 to 8 years of exposure.

What’s a North American hazelnut farmer to do? The obvious answer is to create a hybrid of the native and European versions – and try they have. But such attempts have failed, mostly thanks to EFB. But you can’t keep a good hazelnut advocate down that easily.

“If you had productive [American] plants, you could harvest them, but not in competition with the European nut,” says Molnar, a lead researcher for the Hybrid Hazelnut Research Consortium, a group working to develop a tree on par with Europe’s.

And that competition is serious, given the size of the global hazelnut market, and its potential growth in North America. Hazelnuts are the world’s fifth-largest tree nut crop, at approximately 430,000 tons of kernels harvested annually, worth $3.3 billion. Today, the U.S. produces a measly 3% to 4% of that crop, and Americans eat only 8 ounces of hazelnuts per year, compared to 4.4 pounds for a European.

As a crop, the tree is near-perfect: a low-input, low-impact woody perennial that lasts 30 to 40 years, requiring no pesticides, reducing soil erosion and nutrient runoff, sequestering carbon and providing wildlife habitat. Hazelnut trees are profitable, generating a gross income of between $3,000-$4,000 an acre per year, and that’s not counting any revenue from truffles that can be germinated to grow among their roots, as is done in Europe.

In addition to the nuts and their use in various foods, the hazelnut kernel is 50%-75% oil, and in cooking is equivalent to olive oil, says Scott Josiah, director of the Nebraska Forest Service and Consortium researcher, in a presentation at the 2014 USDA Agricultural Outlook Forum. And its wonders don’t end in the kitchen: as a bio-diesel feedstock, Josiah says, it is superior to the soybean, with better viscosity at lower temperatures and twice the yield per acre. Finally, hazelnuts remnants can be ground into meal that makes a high-quality, gluten-free feed for humans or animals.

Little wonder then, that in the last 100 years, several plant botanists have attempted to develop better-adapted, disease-resistant hazelnuts for the eastern United States by combining the best of Corylus americana with Corylus avellana. But these attempts always fizzled before developing commercially viable trees, and commercial production of hazelnuts in the United States, starting in the late 1800s, was confined to Washington and Oregon. The Willamette Valley still produces all of the U.S. market’s hazelnuts.

Only after the EFB fungus sneaked into southwestern Washington in the 1960s and later into Oregon’s Willamette Valley did the Great American Hazelnut Hunt really commence. With typical efficiency, EFB eliminated most production in Washington and heavily impacted the latter with the costly production headache of scouting for cankers, pruning and applying fungicides.

“Getting EFB was bad for Oregon’s industry, but the fact that EFB made its way out there caused the USDA and Oregon Department of Agriculture to spend millions on the disease that was affecting a commercial crop,” says Molnar. “We have been trying to breed hazelnuts in the East for 100 years, but the research didn’t go very far because it had no industry to support it, and once the breeder died, it would sputter out.”

Since 1996, the Hybrid Hazelnut Consortium has been working behind the scenes to breed a robust tree. Using advances and plants developed in Oregon, they’ve identified “14 superior selections” that are several years into farm testing in New Jersey, New York, Pennsylvania and Ontario. The Consortium hopes these predominantly European-American hybrids will produce a kind of Great American Hazelnut: a high-yielding, insect- and EFB-resistant, cold-hardy, heat-tolerant hazelnut of commercial taste and appeal.

‘We think we have plants that could be the basis of an industry in the East.’

“We think we have plants that could be the basis of an industry in the East,” says Molnar, who wants his farmers selling to the likes of Ferrero Rocher, the popular candy maker. His goal is to release the best two or three performers of the farm trials to nurseries in three or four years.

While still not quite on par with Europe’s best offerings, Molnar thinks that the next generation of U.S. hazelnut tree will please both farmers and consumers.

Furthermore, Molnar believes that future versions of the tree, which are just emerging from development at the university, may even rival the world’s best. But it will be several years before this newest generation of hazelnut trees gets into farmers’ hands.

As the Consortium begins to roll out selected hybrids, Eastern U.S. farmers can begin to dream of what their ancestors never could: A delicious, profitable crop that produces multiple streams of farm income with little headache.

I’d like to ask the same question. I live in west-central Alabama, and am looking into starting an orchard for hazelnuts. It would be nice to find a variety that will grow well here.

This article is a little misleading or out of date. There are more than 6 commercial EFB-resistant cultivars available today. They all have the gasaway gene that gives them immunity. OSU has done a fantastic job breeding these commercial cultivars.

If you’re planting hazelnuts today make sure you choose one with genetic EFB resistance.