When "Vanilla Ice Goes Amish” pops up in the listings, even the most jaded viewer might take pause. 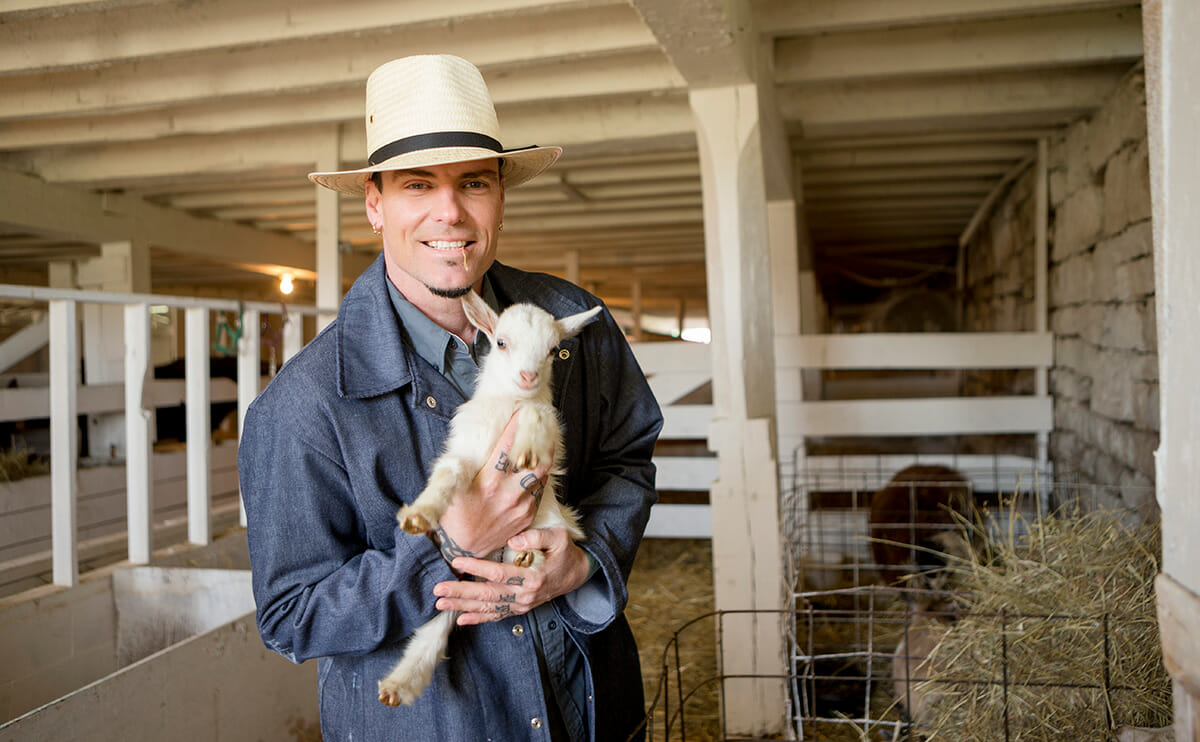 “Now, we always knew that there was going to be a big opportunity for promotion when people hear Vanilla Ice and goes Amish,” says Danny Tepper, the show’s director. “I know what they were expecting, and the same thing that you were expecting. You were expecting it to be some sensationalized, crazy exploitation piece.”

Here’s the concept: Robert Van Winkle (a.k.a., Vanilla Ice, known for his ubiquitous 90s rap hit “Ice Ice Baby”) abandons his usual stomping grounds in Palm Beach, Florida for Holmes County, Ohio, home to the largest Amish population in the U.S. There he lives with an Amish family and joins forces with Amish craftsmen to carry out home renovations. The half hour show debuted on October 12, 2013 on the DIY Network. Sound random? It’s actually not. Since Van Winkle disappeared from the spotlight he’s made himself over as a home improvement expert, buying and flipping homes. He’s gotten into landscaping, too, and owns a nursery in Palm Beach. This isn’t even his first reality show based on his building chops – his first foray into the medium was the home-improvement focused “The Vanilla Ice Project,” also on the DIY Network.

The Amish community was understandably leery about participating in the show at first. Reality TV has not been gentle to the Amish. First there was “Breaking Amish,” in which young Amish and Mennonite cast members travel to New York, go to strip clubs, get tattoos and do bikini photo shoots. Then there’s “Amish Mafia” a show that purports to follow the exploits of Amish enforcers tasked with protecting the community. Several outlets have cast doubts about the “reality” part of the show. Tepper says that in the end the DIY network was able to win the community over with their squeaky-clean image and a promise not to portray the Amish participants as oddball anachronisms.

“We came in from the approach that this is about home improvement,” he says. “This is about building. This isn’t about exploiting anyone.”

Unlike the rest of the country, much of which has grown up with “The Real World” and graduated to “Vanderpump Rules,” the Amish community presented an ark of pristine cast members.

Unlike the rest of the country, much of which has grown up with “The Real World” and graduated to “Vanderpump Rules,” the Amish community presented an ark of pristine cast members.

“You know, everyone really knows how to act like a Real Housewife or a Kardashian, or something,” says Tepper. “There’s a kind of syndrome where everybody knows about reality TV, so they know how to act that way. We went to a land where there were no bearings for them to know about reality TV, and that was great for us because their interviews and their interactions were completely honest.”

Van Winkle’s host is John Schlabach, who owns a horse farm and runs a construction business. Van Winkle travels around with Schlabach’s crew, helping out with renovations. His description of a kitchen that needs refurbishing? “Dated and hated. It’s old school. Like really old school.” The foreman’s summation of how the Amish couple who own the kitchen first react to the musician? “I think the Hershbergers were kinda overtaken but the earrings and some of the attractions he’s got over his body.” Over the course of the show Van Winkle helps birth a calf, which he names Baby Ice (“It’s a little heifer, and hopefully Baby Ice will produce a lot of milk,” says Schlabach), shovels manure, raises a barn and “pimps out” a buggy with a disco ball and LED lights. There are several charmingly strange moments, like when Van Winkle performs “Ice Ice Baby” for a party after the barn raising. Girls in bonnets bob their heads along to lines like “Killing your brain like a poisonous mushroom,” accompanied by acoustic guitar. There is Van Winkle’s proclivity for calling his coworkers “ninjas,” as in: “”We put together an A Team. That’s Amish Team – of ninjas!”

“I had a great time hanging out with the Amish,” Van Winkle told Modern Farmer in an email. “We told great jokes, they have great values. I have been married for 16 years, two children, and I understand the value of family and friends. The Amish like to enjoy each other’s company, and I’m honored that they accepted me in, and I didn’t miss anything like my cell phone or computer, because I was too busy working.”

At least one of those jokes was about Van Winkle’s vegetarianism.

The formula, apparently, is a success. The show has proven to be one of DIY’s most popular and the network has renewed it for a second season. But if you decide to tune in, don’t do it for the fireworks celeb-reality TV typically delivers. The most acrimony that graces the screen in the first season may be when Van Winkle tells a rooster to shut up.

“You have the TV where people are screaming at each other, there’s backstabbing,” says Tepper. “It’s really permeated society, and it’s tough. I think you have to go deep into the heart of Holmes County if you want to find unadulterated, real people who are living their real lives, and that’s just what we found.”

Popular
Could Dissolvable Cranberry Film Replace Plastic Packaging Someday?Emily Baron Cadloff
Alaskan Salmon Face a Stream of New MinesBecki Robins
7 Smokable Plants You Can Grow That Aren’t MarijuanaBrian Barth
Why Don’t We Eat Turkey Eggs?Dan Nosowitz
Where Has All the Mustard Gone?Chloe Faure
Explore Modern Farmer
Related
Environment, Food & Drink
Where Has All the Mustard Gone?Chloe Faure
Animals, Environment, Health
To Stop New Viruses Infecting Humans, We Must Protect Bat HabitatAlison Peel, Peggy Eby, Raina Plowright
Animals, Food & Drink, Lifestyle
The Great (Sticker Shock) ThanksgivingLindsay Campbell
Environment, Food & Drink, Water
Egg Whites Could be the Key to Cleaning Our OceansShea Swenson
We use cookies on our website to give you the most relevant experience by remembering your preferences and repeat visits. By clicking “Accept”, you consent to the use of ALL the cookies.
Cookie settings ACCEPT
Privacy & Cookies Policy