Could Moss Power Our Homes?

No one pays much attention to moss. But not only has it been used historically in everything from medicine to furniture stuffing -- it also produces electricity. 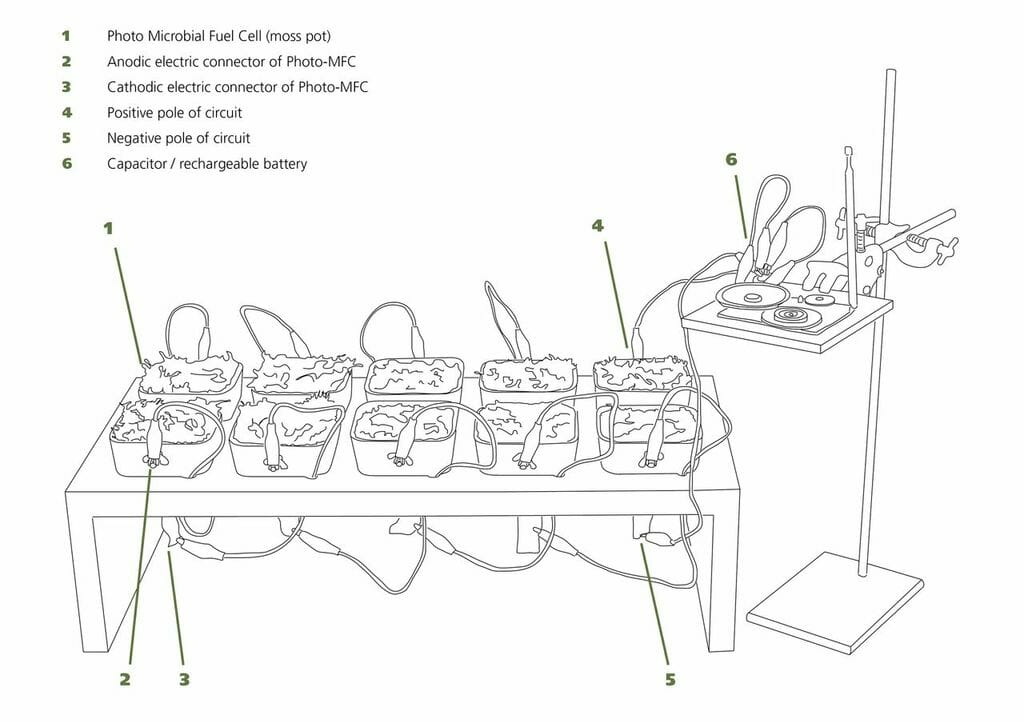 Yes, it helps your potting soil retain moisture. It’s vital to your Scotch’s sultry mouthfeel. And paired with a rolling stone, moss rounds out a classic idiom. But for the most part, moss exists on the periphery: a neutral counterpart to flora that matters.

“Most people don’t notice moss unless they scrape it off their driveways or their roofs,” says Swiss designer Fabienne Felder. “They might think it’s a weed.”

But Felder (whose friends have dubbed her “Moss Lady”) brings a different perspective to the table. Not only has moss been used historically in everything from medicine to furniture stuffing — it now produces electricity.

Along with two scientists from the University of Cambridge, Felder developed a way to use moss as a “biological solar panel.” Put simply, moss creates surplus electrons during photosynthesis. Felder’s collaborators have tapped into this electricity on a small scale — they’ve built a functional, moss-powered radio.

Cutely named Moss FM, this little radio is serving as a proof-of-concept for the team’s Photo Microbial Fuel Cells (Photo-MFCs). Initially Felder, along with Dr. Paolo Bombelli and Ross Dennis, had designs to carpet an airplane cabin with electricity-conducting moss. That technology would’ve taken a decade to develop; Moss FM works now.

It’s admittedly not the handiest gadget: The radio only runs for a couple minutes at a time. To power it continually, Felder says they’d need about 10 square meters of moss. But it’s early yet — the scientists have only figured how to harness about 0.1% of moss’s energy.

Felder likens this to the beginning phases of solar energy research, when the technology was woefully inefficient. “People said solar could never compete with other power sources,” she says. “Now look at it!”

The goal now is to streamline the technology, then scale up. Felder’s team has worked out a little equation. If the population of London were to charge their phones with moss for two hours every other day, the saved energy could power a whole town — 42.5 million kWh.

Felder spurns members of the DIY movement who ask for her design specs. Moss FM is University of Cambridge intellectual property, but beyond that, her fear is that people would start pilfering moss from the woods — disrupting delicate ecosystems in the process. If her product scales up, she’d rather see moss cultivated than wild-harvested.

But does it have to be moss, or could Photo-MFCs be powered by other plants? Yes and no. Moss is ideal because of its slow pace; faster-growing plants are efficient, utilizing more of their own electrons.

That said, Felder’s group has considered rice plants as another source of photosynthetic power. “What if we could transform an entire rice paddy into an electric generator?” she asks. “That’s when it starts to get interesting.”