Quail: Are Big Things Ahead for a Tiny Bird in the U.S.? - Modern Farmer
Animals, Food & Drink, Plants

Quail: Are Big Things Ahead for a Tiny Bird in the U.S.?

The teeny, tiny quail never found it's way into the U.S. dinnertime oeuvre. But all that might change. 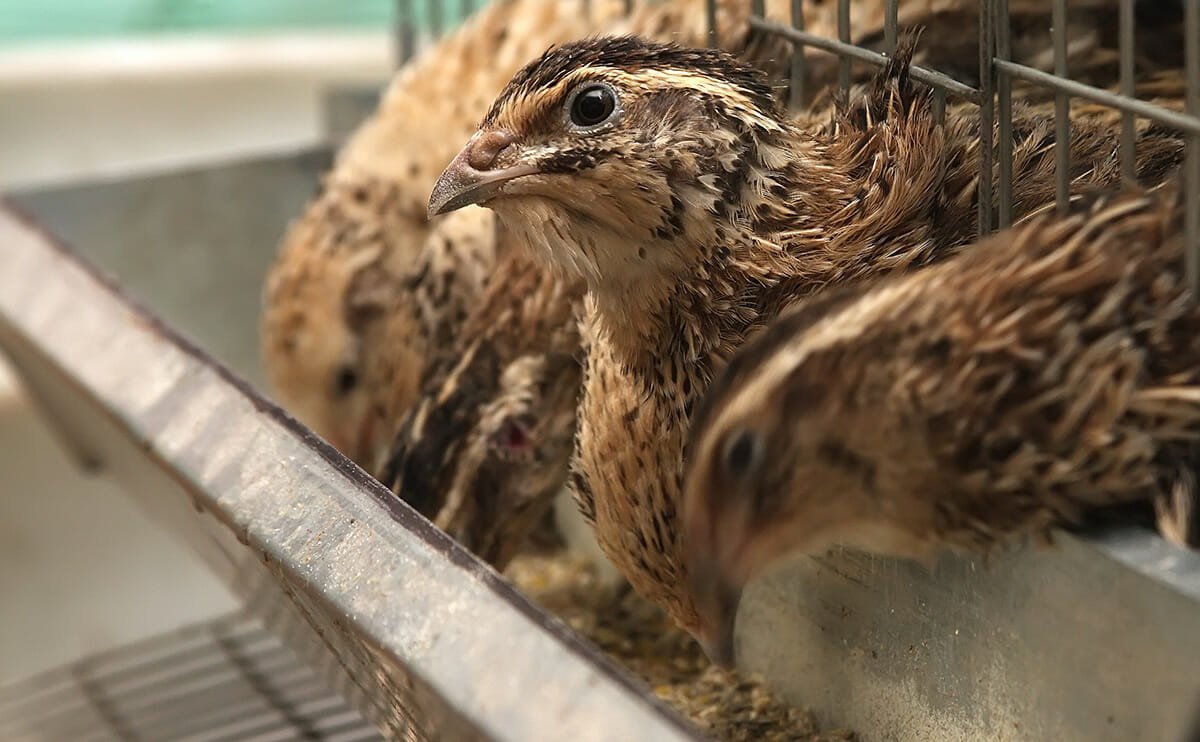 Hunters have shot at the U.S.’s domestic quail species, the bobwhite, for centuries. But populations started dwindling in the early 20th century and nearly disappeared in some regions of the country.

Until the 1980s, quail was farmed only to stock hunting plantations, primarily for the wealthy. Agribusiness’ speedy global boom following World War II found its “model organism” in the chicken, not the quail, as one French researcher noted.

But the quail has enjoyed international success. The bird’s healthful eggs are beloved around Asia and in Mexico. Kenyans are clamoring to cash in on what’s seen as the country’s next agricultural boom, and quail is a standard in European kitchens. But in the U.S., quail hasn’t much left the white-table-clothed world of fine dining. And although it can now be found in some store’s frozen food aisles, the average shopper skips past it, if their neighborhood retailer stocks it at all. In the U.S., we’re used to bigger birds.

“Quail is simply more difficult to eat than other poultry because of its small size and delicate nature,” says Southern cookbook author and Southern Living contributing editor Rebecca Lang. “I know some cooks see it as a real ‘working for your supper’ with your knife and fork.”

Yet quail farmers say just wait, their product is the next big (really little) thing.

And the numbers seem to support them: U.S. farmers produced nearly 40 million quail in 2007, which is the most recent available data through the USDA. That’s double the number counted in 2002 and ranks the U.S. fifth in global quail production behind China, Spain, France and Italy.

Since commercial quail farming gained a foothold in the 80s, four companies – Quail International, Manchester, Texas Quail Farms and Cavendish Quail Farms – have cornered the market of raising quail specifically for restaurants and home cooks. Most farmed quail is destined for restaurants, mostly upscale, but in the last decade, the two largest quail companies – Quail International and Manchester Quail – both have worked their way into a modest retail market.

Quail International has come to dominate domestic U.S. quail production by emulating the structure of the chicken business, contracting with farmers around the middle Georgia facility, counting 26 chicken-style grow houses in their production chain. Quail is slaughtered much like chicken, only using smaller size equipment that companies must have custom made. Last year they produced 17 million meat quail, or four times the amount produced by Manchester, which is more of a family affair.

“Quail is a nicety, not a necessity,” says Manchester Farm’s Britteny Miller, who now solely operates the farm business her father started more than 30 years ago in Columbia, S.C. Miller’s company slaughters 4 million quail a year and sells a four pack of semi-boneless marinated quail for $15 each. Each bird weighs about 4.5 ounces. Before the 2008 recession, Miller says Manchester showed major growth, including a prime partnership with Wal-Mart. But the crash affected both retail and restaurants sales. Wal-Mart pulled out. The chefs have come back, but retail is lagging, though Miller sees it picking back up.

Quail producers have one distinct thing in their favor: the bird they raise is uniquely suited to commercial production. There are many farms in North Carolina, Texas and Georgia that raise bobwhite quail to meet hunters’ needs. But the quail raised for kitchens is a different variety – the Coturnix, or Japanese quail.

A native of Asia, and popular for centuries in Europe, the Japanese quail is hearty and more nutritious but less meaty than a chicken. It requires less ground space than other poultry to grow and less time to reach maturity. The relative ease of raising Japanese quail in small spaces has made the bird popular among backyard farmers and doomsday preppers.

The challenge for producers, though, is to convince the average home cook to serve quail. As David Tanis wrote in a 2012 New York Times article about how easy the bird is to prepare, “Most people I know happily order quail in a restaurant, but rarely think of cooking them at home.”

Miller says the advent of culinary entertainment like the Food Network and “Top Chef,” have helped make the case for supermarket wallflowers like quail.

Quail International (which sells under the label “Plantation Quail” in supermarkets) is in a unique position to teach U.S. consumers to love quail. It’s a Spanish company that opened in the 1980s when a group of European investors brought a flock of Japanese quail to Greene County, Georgia, a very rural place, and revved up production in a former chicken processing facility. In Spain, quail is consumed regularly.

Quail International sales manager Ivan Bilbao says building the quail market requires a fair amount of consumer education and marketing the bird in ways familiar to supermarket shoppers. Both Quail International and Manchester offer boxes of quail wrapped in bacon or on kabobs to lure skeptical palates. And both offer partially deboned birds to make “working for your supper” a little easier.

In addition to careful marketing, the expanding diversification (and palate) of the U.S. has given the quail industry a boost. Chinese and Vietnamese immigrants account for more than half of Quail International’s sales, with Hispanic immigrants making up another quarter of their business.

U.S. quail production is still miniscule compared to the billions of broiler chickens raised every year in the U.S., but farmers are optimistic, inching their numbers up. Quail International expects to increase production by 25 percent in 2014; Manchester has deals working with a regional restaurant chain and new retail customers.

Quail International has dipped its toes in the international market as well, finding the most success in China, a country that produces three times as much quail as the U.S. Marketing head Arnold Cardarelli thinks that some Chinese consumers trust U.S. companies’ USDA-inspected production over their own country’s in light of recent food safety issues.

Manchester is happy to stay smaller, with the majority of their birds destined for fine dining kitchens run by well-known chefs like Sean Brock and Hugh Acheson.

“We don’t want to be Tyson,” says Miller. “The chefs don’t want us to be large. They want us to have passion and not just be zinging out numbers. We’re a boutique brand.”

And for now, both companies said they’re focused on the U.S.

Interesting article. I would like to see the quail ind. pickup in Mississippi. I grow quail for myself and some for local auctions.

This is one of the best Quail farming books out here anyone can rely on to supplement this video https://www.amazon.com/Quail-Farming-Beginners-Ultimate-Comprehensive-ebook/dp/B07H47KHST