Meet the New Drone That Could Be a Farmer's Best Friend - Modern Farmer
Animals, Plants, Technology

If it were possible to give every square foot of the farm exactly what it needs, when it needs it, two things would happen: Farmers would get a bigger crop yield, and use less input ”“ water, fertilizer, fungicide, pesticide, etc. This means less cost to both farmers and to the environment. 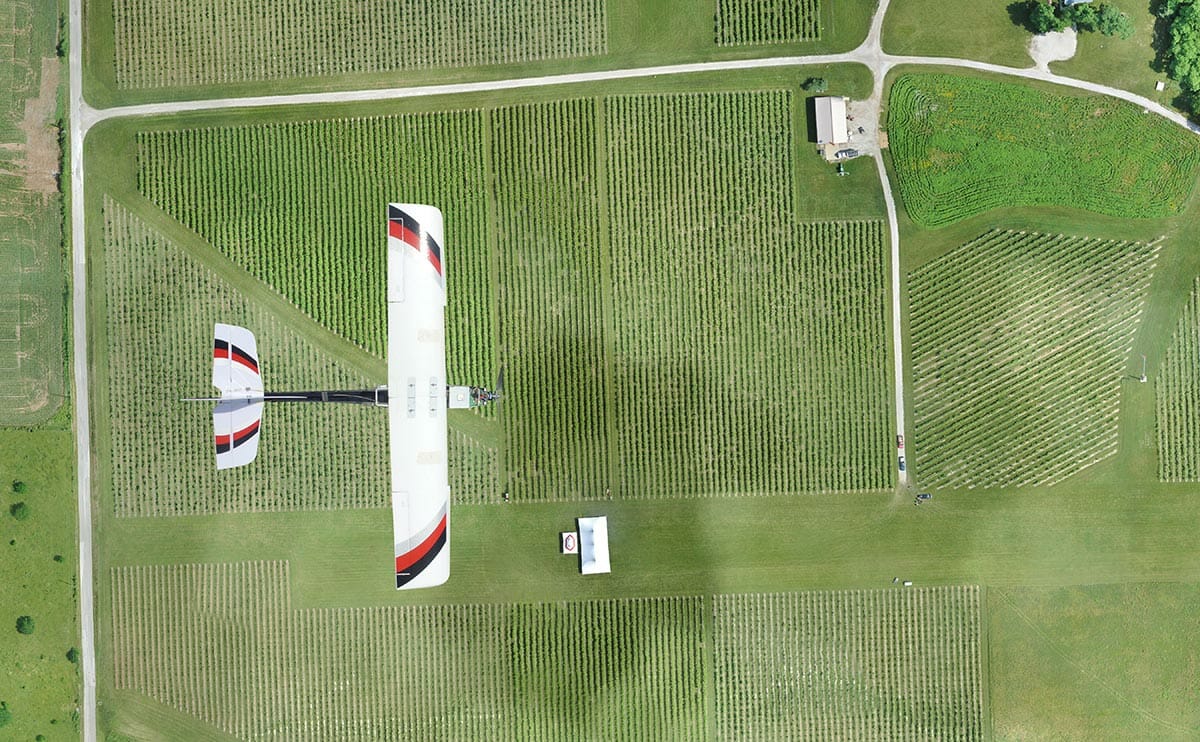 If it were possible to give every square foot of the farm exactly what it needs, when it needs it, two things would happen: Farmers would get a bigger crop yield, and use less input ”“ water, fertilizer, fungicide, pesticide, etc. This means less cost to both farmers and to the environment.

This, researchers say, is what drones can do for farms. They fly over fields, collecting data that goes far beyond what the human eye can see, such as tiny differences in temperature indicating plant stress.

Drones may sound scary ”“ in fact researchers prefer the term UAV or UAS (unmanned aircraft system) ”“ but they’re widely predicted to be a breakthrough tool for farmers. A recent report by an international UAS industry group determined that precision agriculture and public safety represent 90 percent of the potential markets for drones in the U.S.

Right now, however, the Federal Aviation Administration rules surrounding drone use in the U.S. are tricky. The commercial use of drones is not allowed, though farmers flying a drone below 400 feet over private property “for personal use” — and nowhere near an airport — are in the clear. (Public universities can also get a Certificate of Waiver or Authorization (COA) for unmanned aircraft, and then work with farms.)

The FAA plans to start allowing commercial drones by 2015, but there is already plenty of work being done and money being invested into the technology. Notably: Indiana State University’s Innovate Indiana Fund and Bob Young, founder of the open source software company Red Hat, are funding a Canadian UAS company called PrecisionHawk, which has a U.S. headquarters in Indiana.

‘Agriculture is a very sophisticated industry and farmers are very data hungry — and they have not been well served, historically, in providing that data. They need on-demand data, they need it very high resolution and they need it often.’

PrecisionHawk president Ernest Earon views agriculture as one of the most promising applications for drones. “Agriculture is a very sophisticated industry and [farmers] are very data hungry — and they have not been well served, historically, in providing that data. They need on-demand data, they need it very high resolution and they need it often,” he says.

The company’s unmanned aerial vehicle (UAV), called the “Lancaster,” weighs three pounds, measures three feet long and is designed so farms don’t need an expert on staff. The plane itself is easy to launch — it’s thrown into the air by hand and can be used with a number of different “plug and play” imaging sensors, including thermal (infrared) and hyperspectral, to collect field data that’s both visible and not visible to the human eye. With different sensors and algorithms, growers can hone in on specific problems or information, such as soil moisture or crop disease.

“Plants tend to go yellow in bands [as in the electromagnetic spectrum] that we can’t see before they go yellow in the bands we can see,” Earon explains. “What you’re doing when you’re flying these multispectral sensors is you’re looking in those bands to see the stressors that are showing up in the crops in different frequencies, before you would see them in the visual bands. So two plants that both look green visually, one of them might be undergoing a fair bit of stress from water stress or drought stress, temperature or pest.”

The same concept extends to livestock — sick animals will be slightly warmer, and infrared sensors can pick up the small differences in temperature.

The data is uploaded to the cloud and processed by PrecisionHawk — the company charges per acre for the data management. Prices start at $0.10 per acre for data processing and $0.20 per acre for a year of data storage. In fact, Earon says the company views itself as a data company, rather than a drone company. He envisions an “app store” model that would allow, say, somebody in North Dakota with a top-notch algorithm for detecting potato blight, to license it to other farmers. (Not surprisingly, Bob Young is keen on the open source aspect.)

PrecisionHawk is not disclosing any of its customers, but UAS researchers at Indiana State University, who have worked with several different unmanned vehicles, are giving the Lancaster system excellent reviews.

“So far that has been one of the best platforms that we’ve used as far as accuracy, coming back to land, the pictures, being able to take the information that it received while it was in the air and thread it together on the ground and get good pictures ”“ it’s been probably the best,” says Jeff Hauser, director of the unmanned systems program at the university’s College of Technology. He’s also a brigadier general in the Indiana Air National Guard.

Hauser’s colleague Richard Baker, who is head of Indiana State University’s Center for Unmanned Systems & Human Capital Development, believes a system like PrecisionHawk’s would make sense for many farmers, noting that the average size farm in the U.S. is 418 acres.

“If you got to that size, I think it would definitely be worth the investment,” Baker says. “A very small farmer, I don’t know if it would be worth it or not, but if you have a good size farm, I think you would make your money back pretty quick.”

Baker guesses that farmers could reduce their use of herbicides and pesticides by 40 percent, and their use of fertilizers by as much as 50 percent. “I mean we’re talking huge decreases in the amount of cost — and better quality of the crops,” he says.

And that idea is clearly catching on. Hauser says at an unmanned systems conference he and Baker attended in Kansas in October, the exhibit booths were dominated by agricultural applications.

“It’s the first time we’ve ever seen that,” he said. “We were amazed by the number of folks there just to see that.”