The Future of Farmer Prosthetics

While high-end prosthetics are advancing by leaps and bounds, devices that can hold up to farming remain elusive. 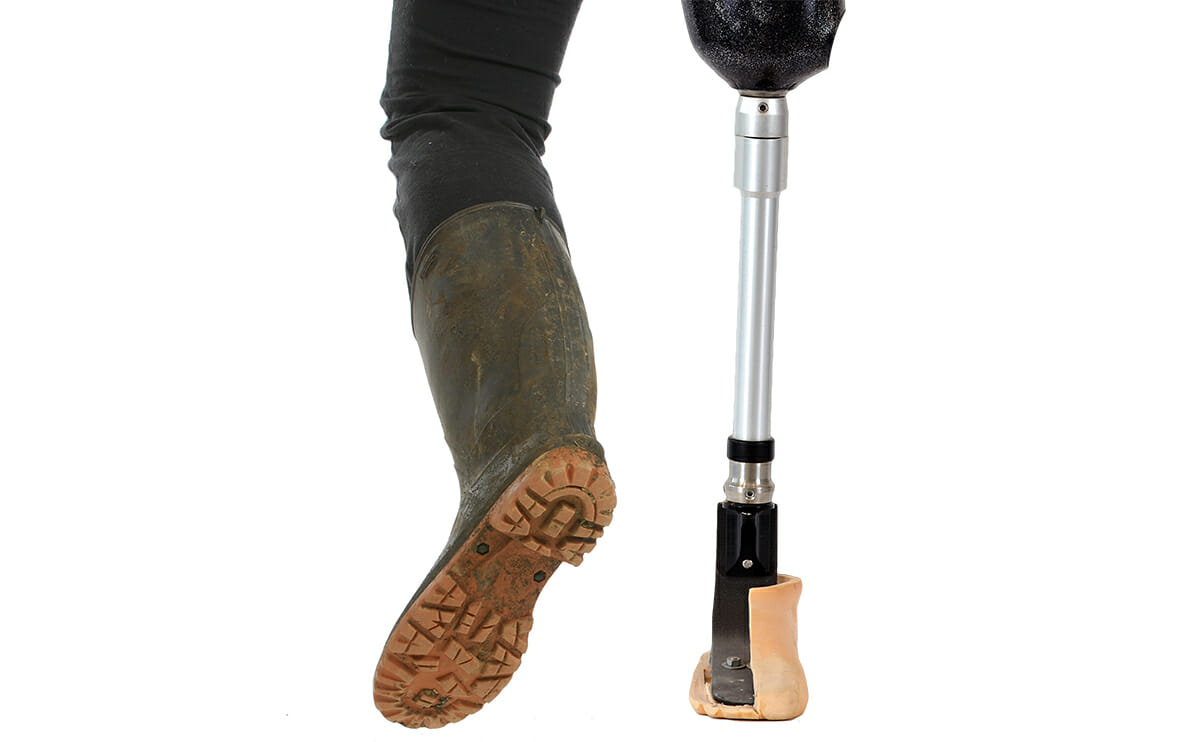 It took Blum a year of work and frustration to get used to his prosthetic leg. “I got mad when I first started wearing one,” he says. “I threw it across the room a couple times, I stomped on it.”

For Blum, and farmers like him the road from injury to working again is riddled with challenges ”“ from finding a doctor who understands farming, to finding a device that can withstand the work, to keeping that device in working order. While high-end prosthetics are advancing by leaps and bounds, devices that can hold up to farming remain elusive. And the need is strong, as farming remains one of the most dangerous professions around. In 2013, the fatality rate in the U.S. was 26.1 per 100,000 workers, making it #8 on list of risk of injury or death. In the U.K., it topped similar rankings as most dangerous industry.

For many farmers with amputations, the first challenge is finding a doctor who understands what farming entails.

For many farmers, the first challenge is finding a doctor who understands what farming entails. Deborah Reed, a researcher at the University of Kentucky who studies farmers with amputations, remembers when her sister had her lower leg amputated. “Because it’s not a standardized job, it’s difficult for health professionals to figure out what it is that [my sister] needs. She uses that leg for a hammer part of the time” says Reed, laughing. To get the right prosthetic you need a prosthetist who knows what you do.

Most of the time, the right prosthetic for a farmer isn’t the fancy myoelectric device that will short out as soon as it gets wet or dirty. In fact, even the simplest, sturdiest of prosthetics can’t stand up to the beating they take on the farm. In 11 years, Reed’s sister has gone through five prosthetic legs. Blum’s first leg was held on to his stub by a vacuum seal. Which works fine unless you’re crawling around on the ground, and after puncturing the sleeve and breaking the seal one too many times he switched to a much simpler pin and lock system.

Most of the time, the right prosthetic for a farmer isn’t the fancy myoelectric device that will short out as soon as it gets wet or dirty. In fact, even the simplest, sturdiest of prosthetics can’t stand up to the beating they take on the farm.

When Blum and I spoke, he was on his way to his prosthetist to get his socket refitted. It’s a few hours from his farm, but Blum considers himself lucky. “I know people too who travel six hours one-way” he says. Because most farmers are so far away from someone who can repair their device, many take it upon themselves to fix things that might break. “We see a lot of duct tape,” says Craig Heckathorne, a researcher on a team from Northwestern University who of recently published a survey of 40 farmers with prosthetic devices. Part of this is a pride in their own ingenuity, Heckathorne says, but the other part is out of necessity. “That might be your whole year’s income sitting out there in the field right now,” says Reed.

When it comes to improving the experiences of farmers with amputations there are some technical updates that would help. Therese Willkomm, an assistive technology researcher at the University of New Hampshire rattles off a wish list: “titanium wrist and elbow units that don’t break, cables that won’t fray, quick release harnesses, a foot that bends when it gets caught in weeds, moisture control and protection during cold or hot weather, a prosthetic leg that allows a farmer to kneel.” But she also points out that it’s not just the prosthetic that could get better ”“ the farms can too. The less a farmer has to climb up and down their tractor, or jump fences, the longer their prosthetic will last and the less likely the farmer is to get injured. The National AgrAbility Project provides funding to help farmers outfit their farms with new technologies ”“ things like GPS sensors, automatic hitching devices and motion detectors for fences.

For Reed, the easiest way to improve the lives of farmers with prosthetics would be to simply get them talking to one another. “I really think that if a few of them got together and formed a Facebook page and were willing to share their stories and tips it would probably be the most helpful thing they could do.”

For Blum, knowing other farmers who had amputations was key. “I had met two other farmers that had decided to continue on being dairy farmers despite wearing prosthetic devices, and they just adapted and went on.” And that’s the attitude you have to have, he says.

“You just think: how can I overcome this. You just keep going.”