The Arctic Apple: A GMO Fruit That Won’t Go Brown

The apple that doesn't brown has many people in the industry nervous. 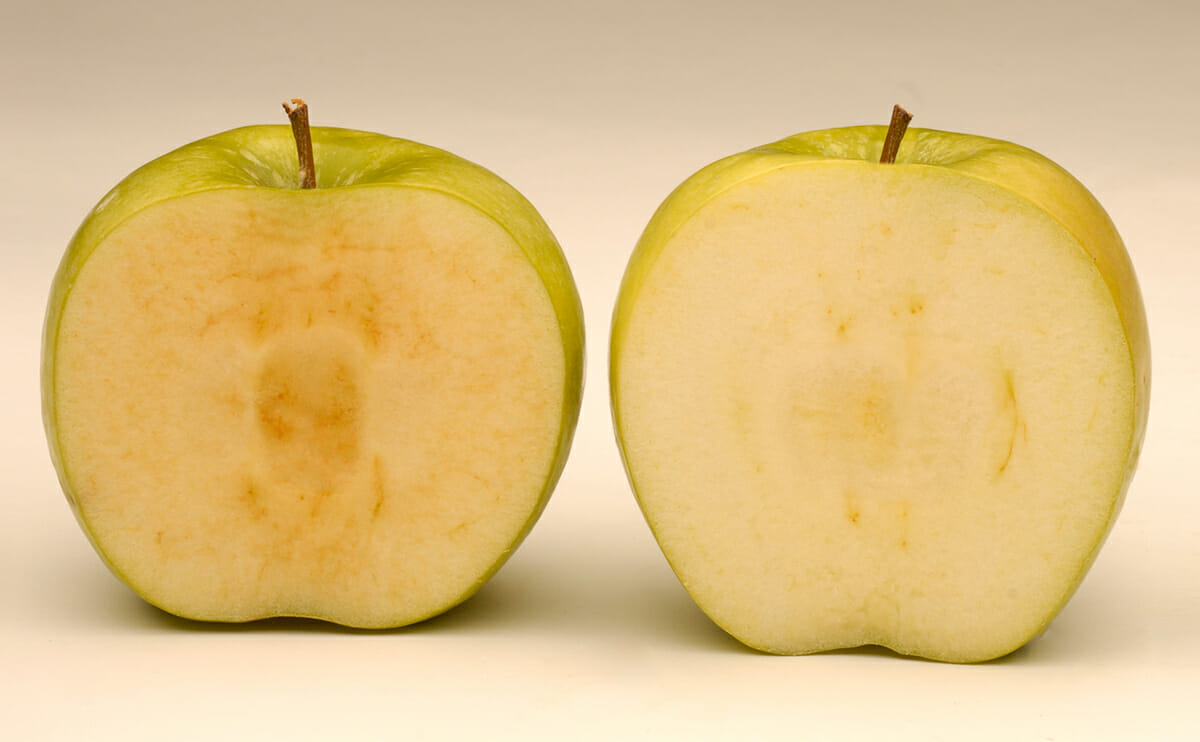 Neal Carter is an orchardist in Summerland, British Columbia, and the president of Okanagan Specialty Fruits (OSF). He says his GM apple is at the forefront of a new wave in biotech: quality traits. “As a GMO apple this is ‘biotech light,’” says Carter. “This is a very innocuous intervention where we’ve used an apple’s own DNA to turn off the protein called polyphenol oxidase that makes it go brown.”

But the apple that doesn’t brown has many people in the industry nervous.

Carter feels sure his Arctic Apples will pass final approval by the USDA and go on to find success in both the bourgeoning pre-sliced apple market and in the fresh fruit aisles of grocery stores. The first batch of Arctic Granny Smith and Golden Delicious apples made the rounds in consumer surveys last year, and Carter says that the response was overwhelmingly positive. According to the results, 80 percent of those who tried the GMO fruit would be willing to buy it if and when it’s made available.

The U.S. Apple Association (USApple) represents the apple industry on a national and international level. In a statement released this past July, it openly opposed deregulation of the Arctic Apple – but not due to concerns over safety and health.

“We don’t see that there’s any flaw in the technology as far as a safety issue,” Wendy Brannen, USApple’s director of consumer health and public relations, reiterated in a phone interview. What does concern her is how the public will react.

Apples have been an American staple since the Pilgrims arrived. Wholesome, healthy and safe, the fruit has thrived on its easy marketability. The introduction of one GMO apple into the market, no matter how innocuous, could spoil the reputation of the entire industry. Apples could become frankenfood.

Todd Fryhover is the president of the Washington Apple Commission and a self-described purist. He’s all for scientific development when it comes to apple production. “I think that our industry understands that GMO is going to play a larger role in our future as our population continues to increase,” he says. But for him, the Arctic Apple doesn’t offer enough benefits for the splash it’s sure to create. “If it was a gene modification that provided full color fruits all the time with perfect shape and the exact same size that consumers want, that’s a whole different story.”

“There really isn’t anything broken,” he continues. “Apples already have a place in the world as being healthy and nutritious and safe. Is there a need to make what is already the best better?”

Last year, Washington State exported over 40 million bushels of apples to over 60 countries. Many of those countries have formally banned genetically modified food. Fryhover wonders how the international community is going to react to the introduction of a GMO apple into a world that already has millions of non-GMO equivalents.

If there’s any consensus around the Arctic Apple it’s that it will very likely be approved. “This is the most studied and the safest apple in the world,” says Carter, and safety will be the basis of the USDA’s scrutiny, not marketability.

Whatever the repercussions, they’re sure to unfold slowly. Apple trees take up to five years to produce fruit, meaning we won’t start to see Arctic Apples in any large quantity in the near future. It’s possible that the risks alone will limit just how many farmers sign up to license the fruit. Anti-GMO bills failed in California and Washington in recent years, but who knows what the landscape will look like in 2020.

Carter is hopeful that the negative buzz around GMO will eventually die down. “With just a little educating the vast majority of people are likely to buy this product.”

In the meantime, Brannen says it’s too early to know whether or not this will be the apple industry’s Pandora’s box. More than the USDA, it is consumers who will decide the fate of the Arctic Apple. “Their decision will in turn help to shape any future advancements, whether it’s in apples or other fruits and produce commodities.”

For some, the Arctic Apple will be an uncomplicated addition to their kitchen’s fruit bowl. For those who regard perishability as a hallmark of whole food, brownness will continue to be a reminder that a sliced apple ought to be eaten promptly.

And there’ll always always the old lemon juice trick – until of course a non-sour lemon comes along, but that’s a whole different fruit tree.