Forget ligers, tigrons and grolar bears (oh my). Plenty of jaw-dropping hybrids can be had at the farm, where cross-species hybrids are more common than you might think. 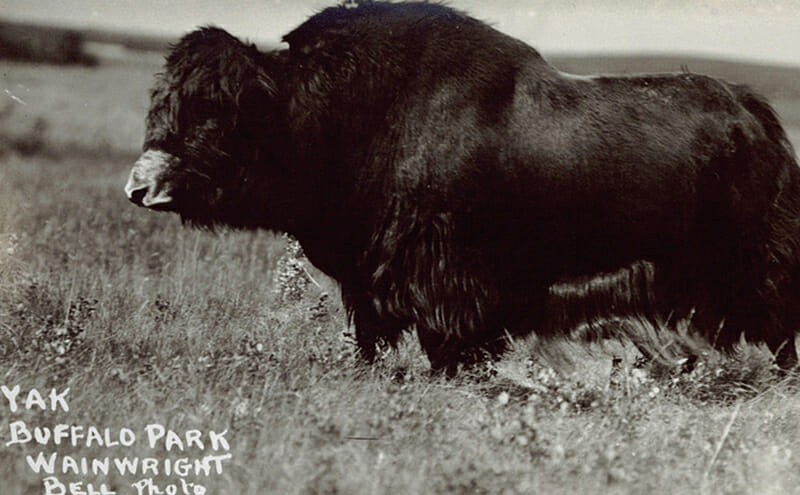 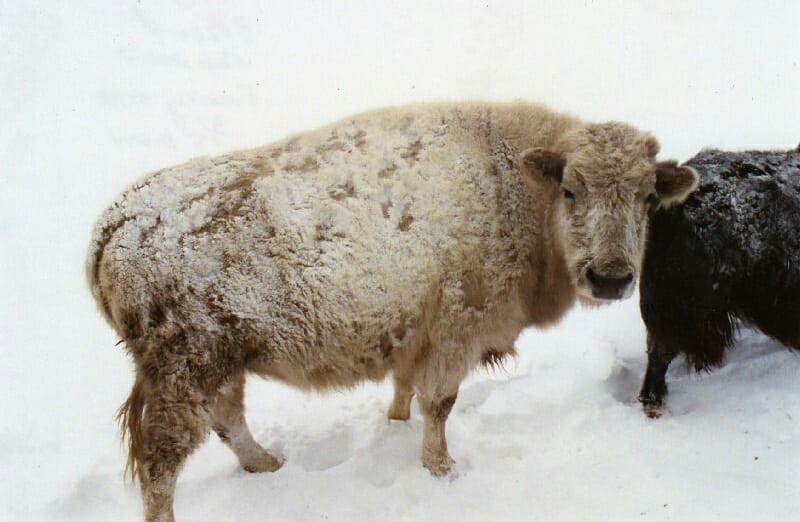 Ah yes, how fondly we remember the 1970s. A time of afros, Nixon, and of course, the peak of America’s interest in beefalo. English settlers in the American south noticed genetic mixes between American Bison and domestic cattle as far back as 1749, but it would be 100 years until the first intentional hybrids and more than two hundred until beefalo entered the mainstream of American culture. That decade, a peak 6,000 ranchers agreed to raise the fertile hybrid.

Popularity in beefalo has waned since, but the meat still has its fans. Just last year, the American Royal Steak Competition rated a beefalo steak from Merril Cattle Co. as the best in the country for the second year in a row. 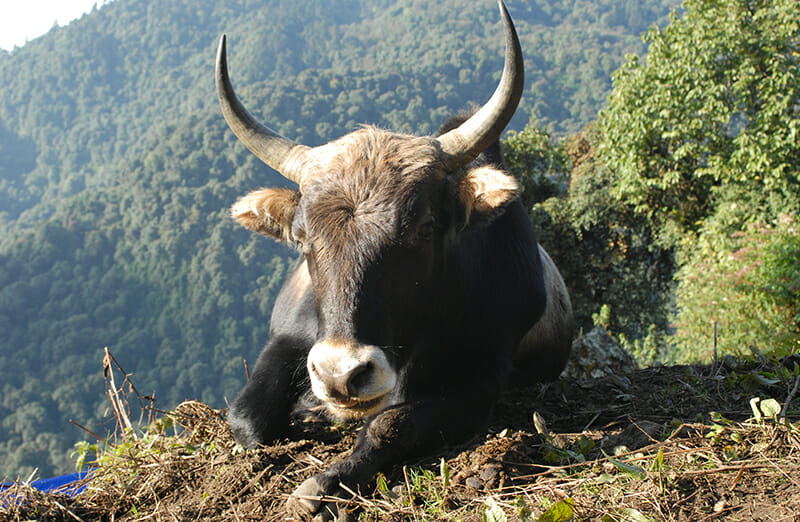 Dzo are the Tibetan cross between yaks and cattle. Like mules, the male version of the hybrid is infertile, but female dzo, or dzomo, are fertile, allowing for the “back breeding” of three-quarter mixes. The hybrids are larger and stronger than the yaks and cattle of the region, making them ideal pack animals for hauling gear to the base of Mount Everest. 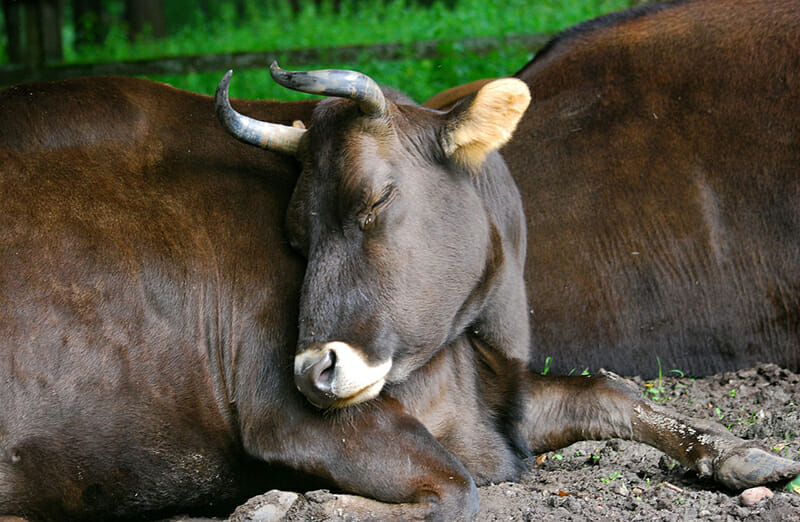 We will move on from the cattle hybrids in a second, but we must mention the zubron: a cross between cows and wisent. Oh, and what’s a wisent, wiseguy? Those are European woods bison that once bordered on extinction, but now are on their way to a comeback thanks to reintroduction efforts. So basically, zubron are Europe’s answer to beefalo.

After WWI, many Europeans thought zubron would replace domestic cattle because of their durability and resistance to disease. But scientists didn’t breed the first fertile zubron until 1960, and in 1980 the Polish government discontinued the program because of a lack of interest from state-owned farms. A single herd of Zubron remain in Bialowieski National Park in Poland. 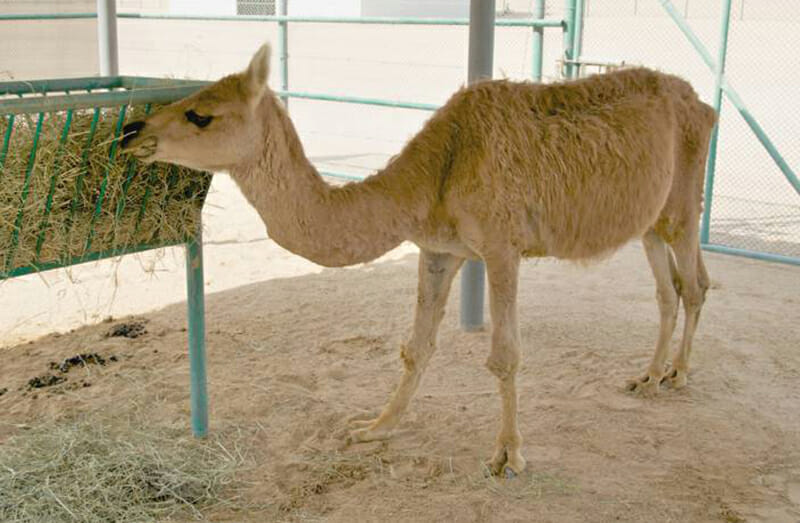 Exactly who authorized the crossbreeding of a camel and a llama to create the first cama, and then named it Rama? Oh right: the Crown Prince of Dubai.

Camels weigh six times as much as llamas, so suffice it to say that artificial insemination was the only option for researchers in the United Arab Emirates. They succeeded in 1998, creating an animal they hoped would have the wool of a llama with the even temperament of a camel. Rama, to their disappointment, has proven rather moody. 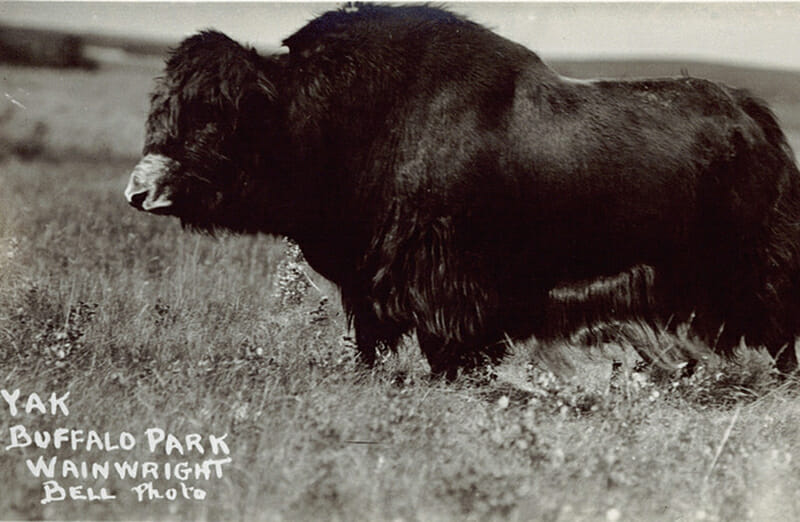 Image courtesy of the University of Alberta Libraries

Alberta is apparently the only home where yakalo — the cross of yaks and buffalo — have ever roamed.

A 1926 edition of the Lyon County Reporter describes the successful cross at Wainwright National Park, one of the Canadian national parks created to maintain the population of American Bison (it was later turned into a military base following WWII). The animals reportedly made for great meat and shrugged off the Canadian winters, but for some reason never caught on. 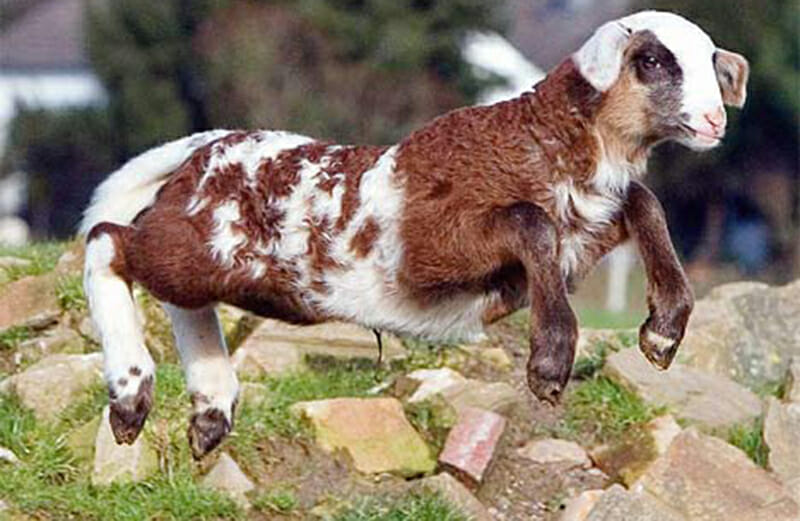 Image via The Daily Mail/Flickr

Millions of years of evolutionary separation and a mismatched number of chromosomes wasn’t enough to stop one goat at farm in Northern Germany. He jumped a fence for a romantic encounter with a sheep. Usually, such cross-breeding result in nothing or a stillborn, but farmer Klaus Exsternbrink watched his sheep give birth to a perfectly healthy geep named Lisa, pictured above. (You could say shoat, but the word already denotes a baby pig.)

While natural sheep/goat hybrids are extremely rare, scientists have perfected a technique to create them in a lab. More on that in a bit. 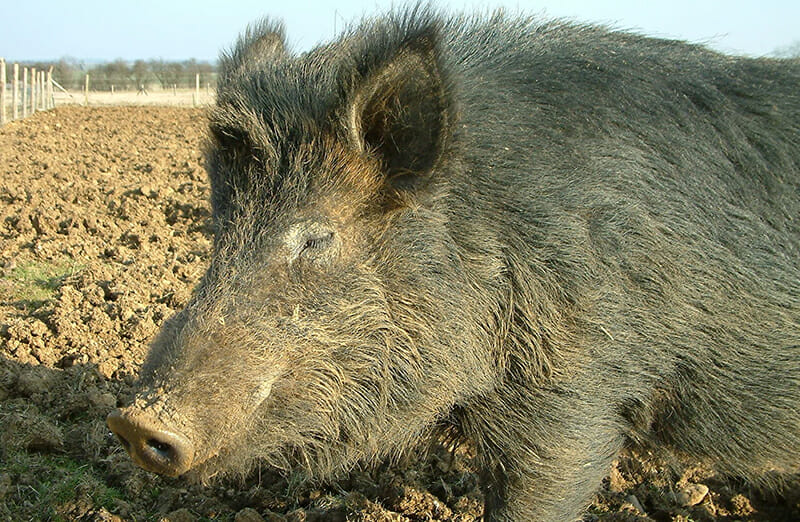 Iron Age pigs are an ancient farm animal with a modern appeal. Scientist bred a male wild boar with a Tamworth sow to create pigs resembling ancient paintings, with one unintended consequence: the meat was delicious. The animal’s meat is now a common sight at specialty meat markets across around the world. 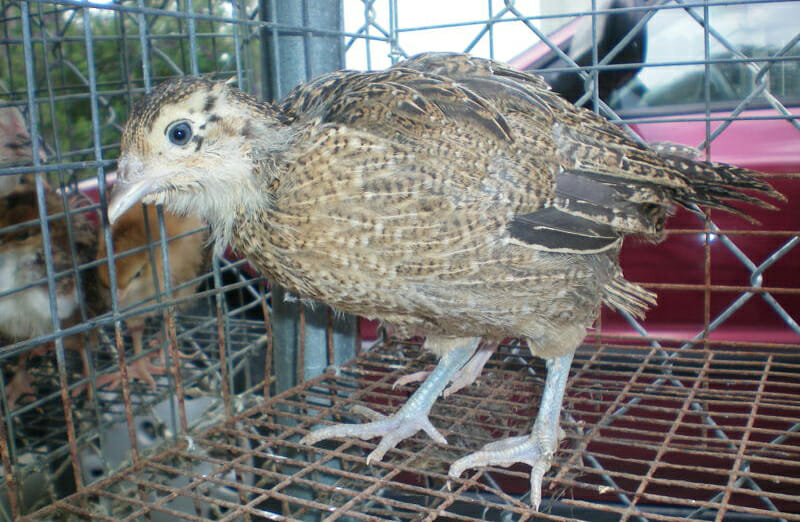 Birds have a much easier time crossing species lines than mammals, making avian hybrids much more common than mammalian hybrids. Some notable combinations include pheasants and chickens, pheasants and turkeys, and Canada geese mating with just about every other type of geese. Strangely, no one has been able to successfully breed a chicken and a turkey. 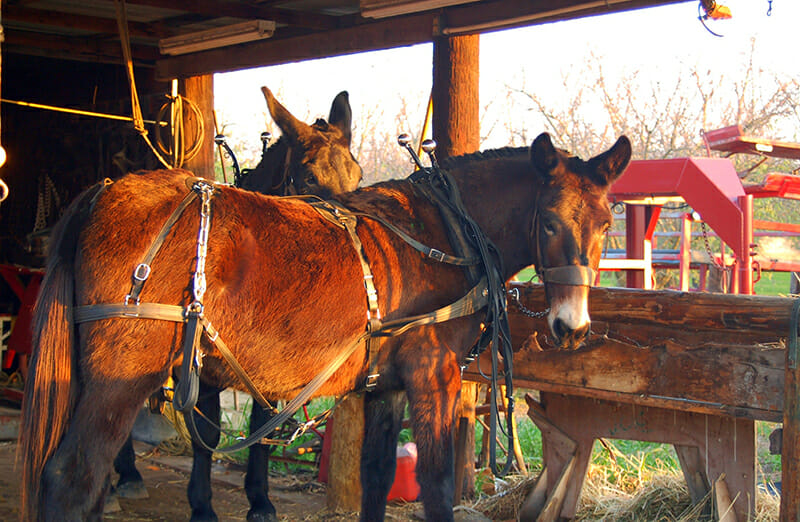 The most common and most practical of all hybrids are mules (the offspring of a male donkey and a female horse) and hinnies (the offspring of a male horse and a female donkey). Ever since George Washington brought mule breeding to America (you read that right), mules have played a primary labor role as work animals and pack animals for their superior strength and endurance over horses. And while they can’t be bred, they can be cloned. In 2003, The University of Idaho succeeded creating the first clone of a hybrid animal — a mule named Idaho Gem.

Strangely enough, there are two ways to create combinations of sheep and goats. The first is the old-fashioned farm mishap, as described as a geep. The other is to mix up the embryos of each animal in a bioengineering lab. The result is a chimera – an animal made of two genetically distinct cells.

Because they have cells tied to each species, sheep/goat chimeras look like sewn together franken pets. The first such chimera in 1985 broke open a world of scientific possibilities, allowing researchers to do such things as insert human cells in animals (like testing human livers cells in mice). Bioethicists remain highly concerned about chimeras, despite their medical potential. Not only does the practice discount the welfare of animals, but some chimeras could become so human that they’d have to be considered as such.

A tough note to end on for a light-hearted listicle, but something to think about. Scroll back up to that sleeping zubron and look at it for a while if you feel the need.

I actually own 30 yak/cattle hybrids that have been documented by DNA analysis through GeneSeek. I have them in Colorado where I train them to pack in the West Elk Wilderness. Yaksmatter.com.

How about a deer/goat cross? Haven’t seen any of these yet.

Did deer cross goat or sheep?

Old Hickory Beefalo Farm ( in the beefalo section above) has also been raising Beeyakalo. A Hybrid of beef, yak and bison.

Anything on the successful breeding of a yak and a muskox ?

Does anybody know if the offspring of deer and cows can reproduce??

in the movie braveheart what breed are the oxen

There actually has been a turkey x chicken hybrid.
https://www.sciencenewsforstudents.org/article/churk-not-thanksgiving

The sheep goat is called a geep