The Life and Times of Dolly the Cloned Sheep

Dolly’s life began in secrecy; her Scottish creators kept her under wraps for eight months. But when her existence was finally leaked to the media, Dolly rapidly ascended to “World’s Most Famous Sheep” (we imagine Shrek was a finalist). Dolly was as infamous as she was famous, an icon for both the promise and the […] 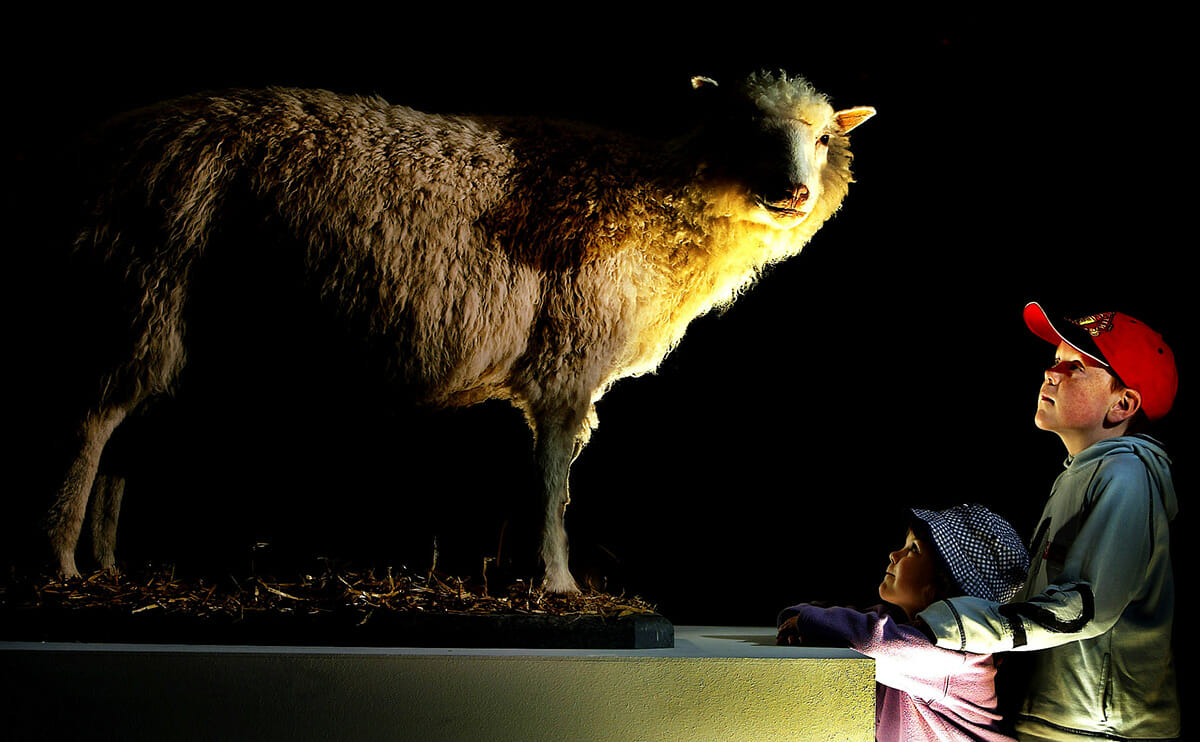 Dolly’s life began in secrecy; her Scottish creators kept her under wraps for eight months. But when her existence was finally leaked to the media, Dolly rapidly ascended to “World’s Most Famous Sheep” (we imagine Shrek was a finalist).

Dolly was as infamous as she was famous, an icon for both the promise and the threat of biotech. President Bill Clinton reacted to her swiftly, banning all federal funds for cloning research. ”Any discovery that touches upon human creation is not simply a matter of scientific inquiry,” he said at a White House news conference. “It is a matter of morality and spirituality as well.”

Others saw Dolly quite differently, as a colossal triumph of human achievement (Á  la the airplane, lightbulb, or penicillin). The technology used to make her had the potential to wipe out disease, to revive extinct species — the possibilities were vast and unknown.

So Dolly became a curiously potent symbol for critics and supporters alike. But she was also just a sheep — fluffy, vocal, a bit overweight. Ten years after Dolly’s death, Modern Farmer caught up with Ian Wilmut, the man responsible for her creation. We wanted to know more about Dolly — the legend and the sheep.

Modern Farmer: You’ve been called the father of Dolly. How would you describe your relationship?

Ian Wilmut: I was quite close with her. The stockmen probably saw her more on a daily basis, feeding her and everything else. But I felt a strong connection, like a man and his dog. 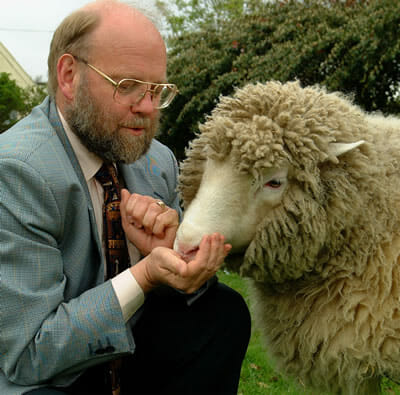 MF: What made her special (besides the obvious)?

IW: She was quite charming, very confident with people. That probably came from being hand-reared. Sheep that are taken from their mothers early imprint better onto people. You don’t get that typical sheep fearfulness.

MF: Did you spoil her?

IW: Oh yes. We gave her treats all the time, sometimes to make her pose for photographs but sometimes for no reason at all. She got somewhat overweight — we had to put her on a diet.

MF: We’ve heard you were fond of her name.

IW: The name is everything. If we’d just given her the number on her ear tag (Ed. Note: #6LL3, for the record), I doubt she would have had nearly the same impact. You know why she was named Dolly?

IW: It was a bit of a joke. Dolly’s DNA came from the cell of a mammary gland. So we named her for Dolly Parton. You can probably guess why.

MF: Technically, Dolly wasn’t your first successful clone. Who came before her?

IW: Well there were Megan and Morag, who were cloned from cultured embryonic cells that were only 10 days old — there were virtually no differentiating characteristics. Dolly came from a full-grown six-year-old. There were also a couple of clones that came from partially grown fetuses. What were there names? Oh, I remember. Taffy and Tweed.

MF: Clearly you weren’t as attached to Taffy and Tweed.

IW: No one was, sadly. Once Dolly was born, she got all the attention.

MF: How did Dolly handle her celebrity?

IW: She wasn’t affected all that much. When the media came here, they’d usually interview one of us near Dolly, but not in the same room. And for security purposes, she was never allowed to leave the lab building. We had permission to bring her to a Royal Society meeting in London but decided against it. Can you imagine transporting a sheep to a five-story old building in downtown London? So stressful.

MF: What about yourself? How did you handle the stresses of getting famous?

IW: I quite liked the attention, to be honest. Certainly it could be a distraction, but it also gave me a chance to discuss really important issues, and what Dolly means.

MF: What does Dolly mean?

IW: Dolly demonstrated we could clone a mammal, but cloning is almost besides the point. Maybe you could clone one particularly perfect lamb, then have a bunch of copies ranging the hills. That’s about it. The ultimate plan was not about making copies of DNA, but of making changes. The prospect of altering DNA, making livestock more resistant to disease, that’s the important thing.

MF: How did Dolly die?

IW: She developed a form of lung cancer. We eventually had to euthanize her, when it was clear the pain was becoming unbearable. Quite a sad day. People said she died early because she had DNA from a six-year-old sheep. This is totally false. She was just unlucky.