Does This Taste Funny To You? Teens Face Off in Competitive Dairy Tasting - Modern Farmer
Food & Drink, Lifestyle

Does This Taste Funny To You? Teens Face Off in Competitive Dairy Tasting

Right now, in hundreds of American high schools, teams of eager co-eds, in black and yellow varsity jackets with their names stitched on the back, are training for the big day: the upcoming Milk Quality and Products Career Development Event at the FFA nation convention in Louisville, Kentucky, which runs Oct. 28 to Nov. 2. 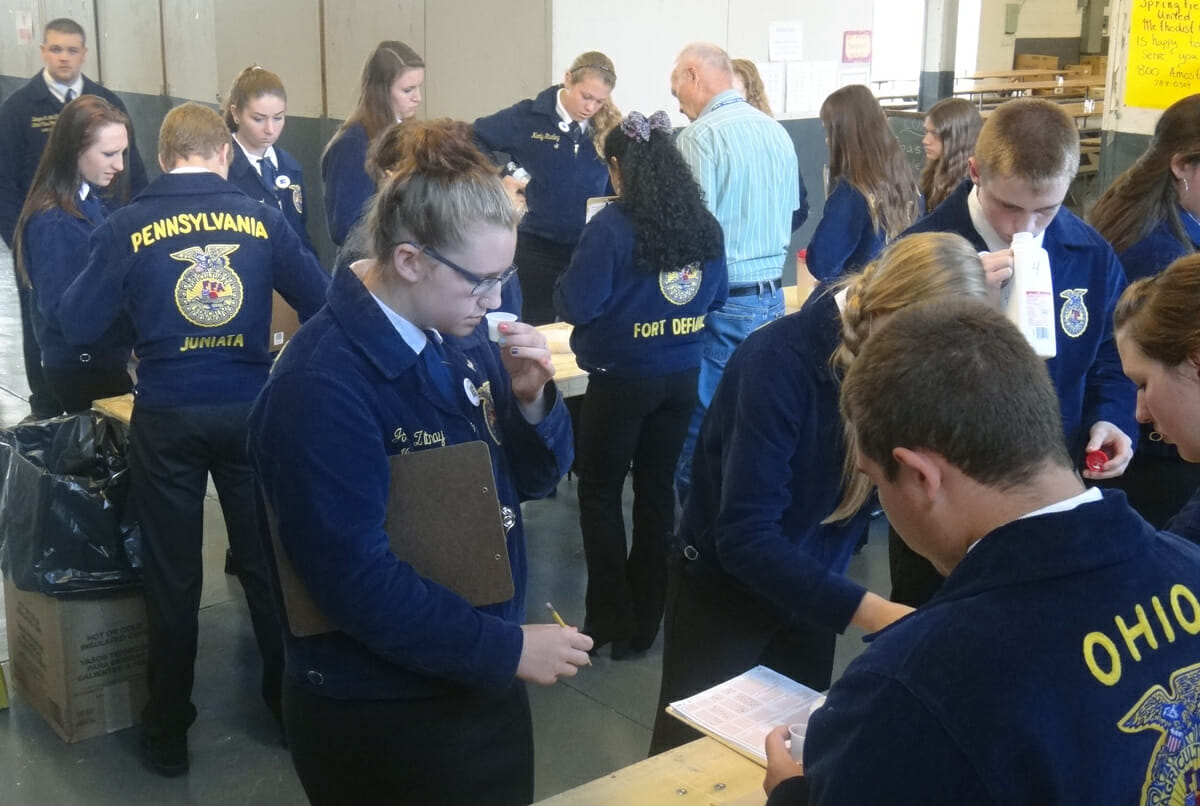 “I really like milk,” she says with a laugh. “I thought it would be fun.”

Competitive dairy tasting is currently practiced across the United States as part of Future Farmers of America’s (FFA) Milk Quality and Products Career Development Event, and even made a cameo in the 2004 indie film “Napoleon Dynamite.” It’s exactly what it sounds like: teams of teens taste samples of milk and assess its taste, quality and freshness. Right now, in hundreds of American high schools, teams of eager co-eds, in blue and yellow jackets with their names stitched on the back, are training for the big day: the upcoming FFA national convention in Louisville, Kentucky, which runs October 28 to November 2.

Four years ago, the team at O’Brien’s Nonnewaug High School didn’t exist. It was a busy high school with a large vocational agriculture program and no one had time to coach dairy tasting. That was, at least, until Erika Petersson, a teacher and daughter of a dairy consultant, asked if she could revive the long-defunct team. Four years ago she asked for permission to restart the Milk Quality and Products team, a four-person student squad, and their first year they placed second in the state. Last year they made it to nationals, and this year Petersson thinks they could be good enough to win the whole thing.

“People always ask me, how do we win all the time? What’s our secret? Honestly, it’s the time these students are putting in. They devote their weekends to this,” she says, as the group conducted their second practice of the week in her classroom. “I have put 110 percent into this team.”

It may sound silly, says Tamilee Nennich, an associate professor of animal sciences at Purdue University, which helps administer and adjudicate the FFA competitions, but the ability to taste milk is a critical component to building a healthy dairy industry. The main goal of agricultural students’ in-class and extracurricular training is to teach them how to identify off-flavors in milk, which can include tastes of blood, garlic and onion, salt, oxidization, bitterness and “malty” – a cereal-like taste that indicates the presence of bacteria.

“Depending on the cows’ diet or how the milk is handled, this can actually produce off-flavors,” says Nennich, whose specialty is dairy cattle nutrition. For instance, onion or garlic off-flavors are caused when a cow chows down on a wild onion or garlic patch. “Obviously, the dairy industry doesn’t want that. We want consumers to be happy and be able to expect the same product every single time.”

From statewide competitions, students have swilled their way through dozens of small cups of doctored milk to reach the top of their divisions. While dairy tasting is just one component of a gauntlet that includes everything from identification of industrial equipment to how to price milk, tasting is a section teams take very seriously.

“These students are winning cash awards, ranging from $400 to $1,000, for both individual events and team events,” says Christine White, FFA’s director of educational programs, herself a former student member and longtime advisor to the Virginia team. “This is also a chance for our members to apply what they’re learning in the classroom to a real-world situation.”

But can milk tasting actually be compared to wine tasting? Absolutely, according to Nennich. “You actually swish the milk around and leave it in your mouth. There are usually crackers or something else to eat between to neutralize the flavors you’re tasting,” she says. “You take a little sip, and depending on how strong they make the off-flavors, the students will often spit it out into buckets.”

Unlike a wine tasting, students are strictly organized along tables, one at a time, with Scantron sheets where they mark down their results, says FFA’s White. “If they’re tasting a type of milk and they’re trying to identify what characteristic it has, they have to do it quickly,” she says, although some have developed techniques to give them an advantage. “Some students bring an apple to cleanse the palate. They have to use all of their senses. In that way it is similar to a wine tasting, except there’s that competitive component.”

While off-flavors aren’t common in milk, primarily due to modern-day mechanization and improved quality control, Nennich says it’s important prospective dairy farmers have the ability to monitor their product and troubleshoot what might go wrong. If a tank hasn’t been washed properly, for instance, that can sour the milk.

The scarcity of off-milk also means that dairy judges and coaches need to find ways to doctor it for training and competition. “There are actually tricks to getting specific flavors, because you generally won’t find them on the shelf,” says Nennich. “For the garlic flavor, you add garlic powder. For rancid flavor, you add vinegar. You can put pennies in to get oxidized flavors.”

For her students to taste at an elite level, Nonnewaug’s Petersson says they need to be able to identify miniscule traces of flavour. Eight kids tried out for her team last year, but only half made the cut. “For salty, I add 10 granules of salt. For garlic I add three or four granules of garlic. It’s very, very small amounts,” she says, recalling the time she had to ask one girl to leave the team because she just didn’t have the aptitude.

“I need students who have heightened senses. Some people in general, have really bad tastebuds.”

(Correction: An earlier version of this article stated that the students were wearing “black and yellow varsity jackets.” Future Farmer of America jackets are blue and yellow. We regret the error.)