Welcome to Modern Farmer's new harvest column, in which we highlight what is seasonal, talk to those who grow it, and share a recipe (or two).This week: sugar beets. Blogger and photographer Molly Yeh talks with her boyfriend Nick - a sugar beet farmer - about the the harvest in Grand Forks, ND; and shares a special latke recipe with us. 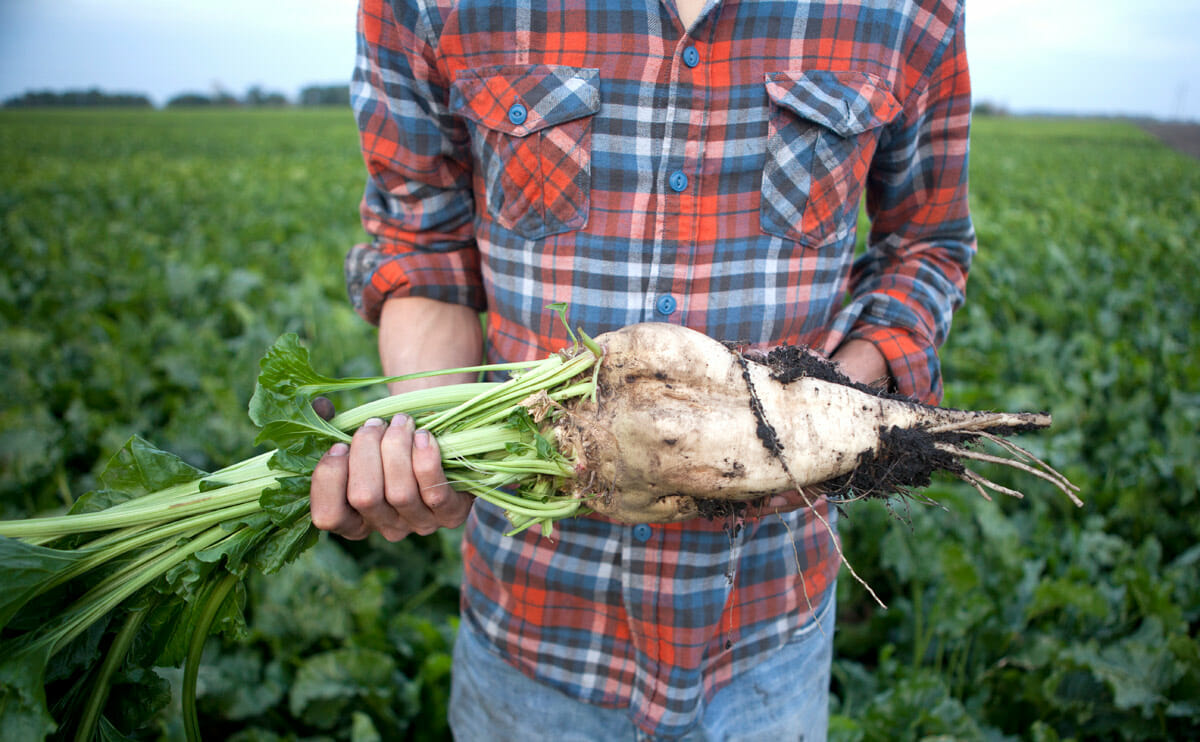 Every year at the beginning of October, residents of Grand Forks, North Dakota, wake up to find the streets covered in dirt and chunks of what look like big white potatoes. Though reminiscent of the first snow of the year, these potato-like bits don’t come from the sky; they plop out from a parade of trucks suddenly filing through town 24 hours a day. This is the first sign that sugar beet season has arrived.

When eaten raw, a sugar beet tastes kind of like a white potato that’s been sprinkled with sugar. After processing, sugar beets are responsible for table sugar, molasses and animal feed. In fact, sugar beet sugar makes up about 20 percent of the world’s sugar.

I had never heard of a sugar beet until I saw one tattooed on the arm of my friend (now-boyfriend) Nick ”“ a sugar beet farmer. He is a fifth-generation farmer, and the fourth generation to farm sugar beets on his family’s farm, which also churns out soybeans, navy beans, and wheat. One day when harvest was rained out, I sat him down and asked him a few questions:

Modern Farmer: So are you like Dwight from The Office?

Nick Hagen: Nope. Dwight farms the better-known cousin, the red beet. I hate disappointing people when they ask me this question, but I love convincing them that sugar beets are way cooler.

NH: Sugar beet growing requires a very specific climate. Most sugar beets are grown in northern regions with a lot of rain. It’s possible that many people have had sugar beet sugar without knowing it, as sugar beet sugar is essentially indistinguishable from cane sugar.

MF: What’s a typical shift like for a beet farmer?

NH: On the beet lifter, which pulls the beets from the ground, I’ll load trucks for at least 12 hours and most of my breaks are for me to clean my machine of mud. For the truck drivers, they’re either in the fields and loading or commuting to the plant where they process the sugar and then unloading. Loading a truck takes 5 to 10 minutes, and then on a good day you might not have to wait at the plant to drop the beets, but because there are hundreds, if not thousands of trucks out at times, the wait can occasionally get up to hours.

MF: What happens to sugar beets once the truck drivers dump them at the plant?

NH: They’re piled for winter storage, and by the end of the three-week harvest, there are enough beets to keep the sugar plant running 24 hours a day for most of the year, creating sugar and emitting a very distinct smell throughout town.

MF: I’ve heard that beet harvest is really dangerous. Is that true?

NH: Beet season is very demanding and there’s a limited window of time that beets can be harvested, based on temperature. It’s a 24-hour harvest, and due to rain and frost and heat this time of year, there can be times when you are forced to pull a 16 hour shift or longer. After a few days of that, drivers start to get fatigued. You also have a lot of seasonal workers who don’t normally use heavy machinery. These factors paired with an influx of truck traffic present more potential hazards than other harvests. It seems like every year there is some sort of accident, and they’re sometimes quite serious, and it’s just something that the community is aware of.

MF: When we first met I had never been to a farm and had a very romanticized view of farming. I know differently now, but are there any romantic parts of sugar beet harvest?

NH: One of the most poetic experiences that I have during sugar beet harvest is driving down a country road at 2am and seeing all of the fields lit up with tractors and trucks. It’s almost like the sky just doesn’t really end and there are stars all over. It’s the most intense harvest, and it’s the one that I love the most.

MF: Even though you don’t eat sugar? 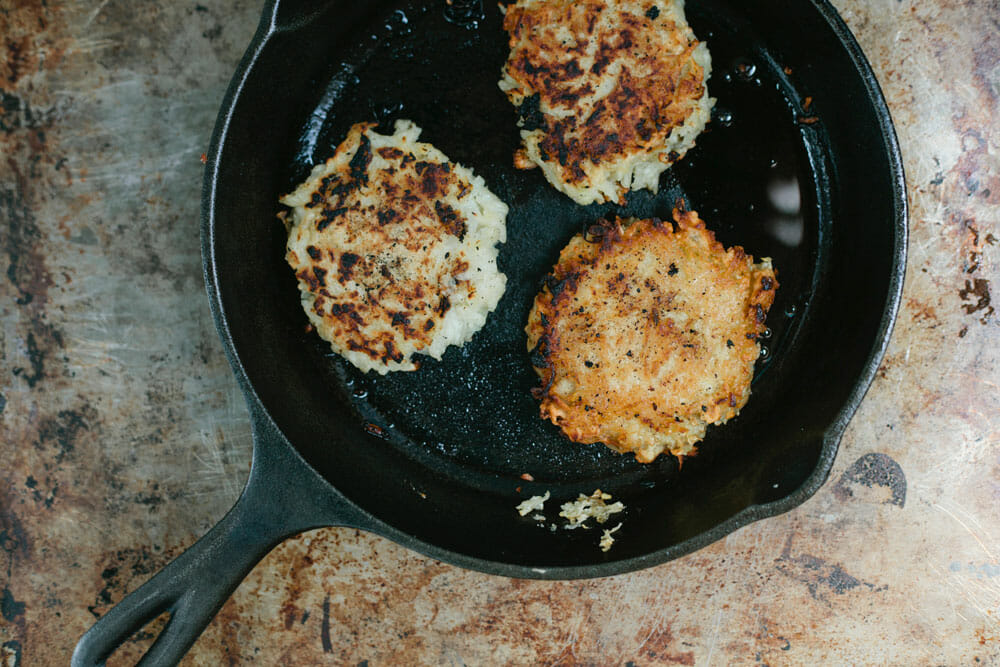 These have a similar texture and appearance of potato latkes, but they are pleasantly sweet. Unless you are a sugar beet farmer, know a sugar beet farmer, or are up for growing a few in your garden, you might be out of luck finding sugar beets of your own. If you’re craving a sweet latke, try subbing the sugar beet for white potatoes and adding a few tablespoons of sugar or honey.

Directions:
Place shredded beet in a colander and toss with salt. Let sit for 15-20 minutes and then squeeze out excess liquid.

In a large bowl, combine ginger, cardamom, and flour. Add the sugar beet, and then mix in the egg whites.

Heat a few tablespoons of oil in a skillet over medium heat. Scoop 1/2-cup portions of the mixture into the pan and press down with a spatula to form a patty.

Heat until browned on both sides. Add more oil as needed.

I am trying to get in touch with a sugar beet farmer that I could order some sugar beets from! Could you send me any names, info of who might be able to help me? Thank so much! This is a time sensitive matter!!