Why Rural Broadband Means You Can Now Buy a Bull Online

The speed of your broadband can make the difference between winning and losing at a cattle auction. 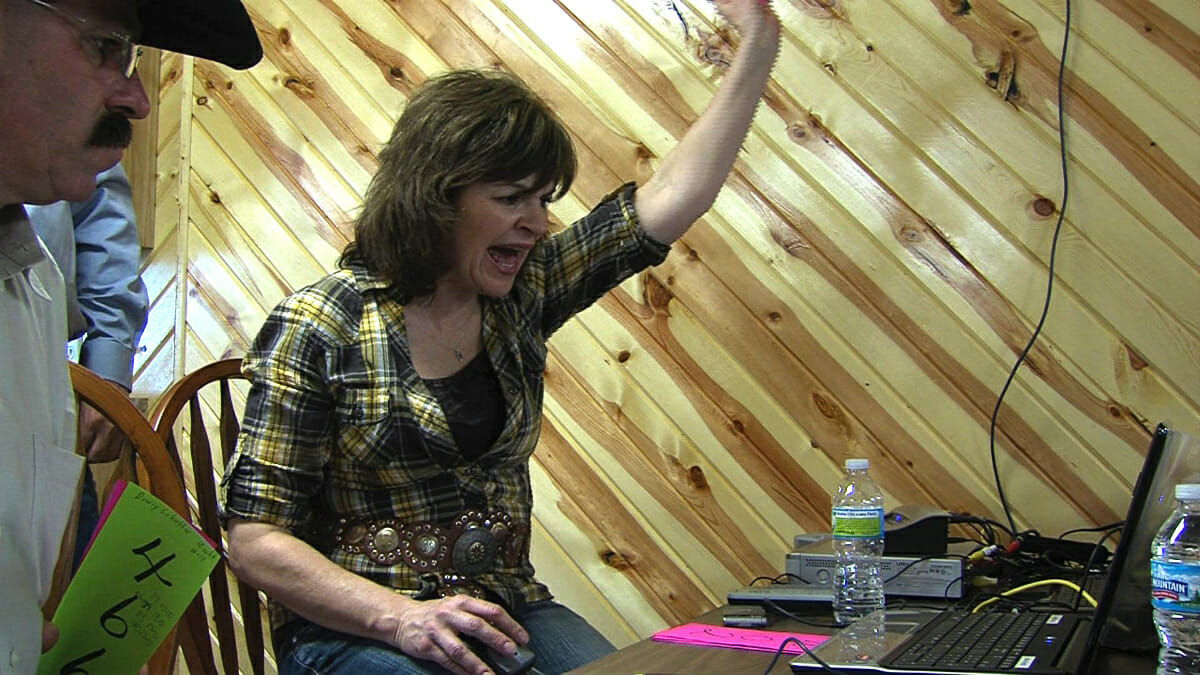 The former McDonald’s manager travels the nation as a sales rep for DV Auction, streaming livestock auctions online. Demand for her services is exploding, as DV Auction claims to be the largest online livestock auction site in the world. At her busiest, McIntosh works on up to five auctions a week. The auctions are varied: there are bulls in South Dakota, horses in Virgina, white-tailed deer in Pennsylvania, or Boer goats in Louisiana.

While the auctioneer works the crowd, McIntosh monitors up to 500 remote bidders on her laptop. When one bids, she flags the auctioneer with a rowdy “Yeah!” In a given auction, more than half the bids come from McIntosh.

There is a new generation of farmer who is using high-speed broadband to improve farming practices, from auctions to smart irrigation systems to political organizing.

McIntosh’s job maybe be specialized but she is not unique – there is a new generation who is using high-speed broadband to improve farming practices, from auctions to smart irrigation systems to political organizing.

Rural broadband is a revolution unfolding slowly and unevenly. Many farmers complain that their Internet is still too slow, and they have a point. As a rule, rural areas have slower Internet service than cities, according to a report from the National Telecommunications and Information Administration, which advises the White House.

In cities (and a few states like Connecticut), fast Internet is universally available. For instance, in Chicago, this reporter’s hometown, every single house – 100 percent – is wired for 3 megabits per second. With that download speed, any Chicagoan can easily watch and bid on every bull, buck, and goat. In rural Illinois, though, 4 percent of the population lacks the option of 3 megabits per second. In the states with the slowest Internet speeds, Arizona and Alaska, one out of five rural residents are in the same predicament.

What does that mean in practical terms? It means that folks participating in a streamed auction might get frustrated without a high-speed connection. Video of the livestock might lag well behind the audio feed of the auctioneer. Or both video and audio may suddenly drop out; at lower Internet speeds, drop-outs are common. “It only takes 20 to 40 seconds to auction a cow or bull,” says Brett Spader, director of operations for DV Auction. “If that drop-oout comes when the animal you want is on the block, you might miss it.”

“Internet coverage is like network TV,” continues Spader. “People rely on it and expect it to work. When it goes out, they’re not happy.”

Spader says there are dial-up deserts in Western states like Nevada, Montana, and Colorado that aren’t able to watch online auctions. For him, those are lost customers.

The government is trying to accelerate Internet speeds throughout the country. The 2009 economic stimulus put $7 billion toward broadband grants, and the Obama Administration is now pushing for more. So are lobbyist organizations like Broadband for America and the Internet Innovation Alliance, which (big surprise) have the backing of telecom companies.

Realistically, though, no government program is going to be big enough to fund all the cable needed. Hence, private companies large and small are scrambling to find less-expensive alternatives. Kooky as it sounds, Google Loon proposes a “network of balloons traveling on the edge of space” to bring Internet to rural areas. A Texas company called ERF Wireless thinks that better wireless is the solution.

Meanwhile, both companies and farmers are exploiting the limited but growing broadband network to grow their businesses.

By attracting online bidders, companies like McIntosh’s can bring a much larger audience to remote farms that will, in turn, bid up the prices. VeaBea Thomas has seen online bidders drive up the auction prices for bulls at her ranch in Harrold, South Dakota by hundreds of dollars.

“During calving season, sometimes people can’t leave home to come to an auction,” she explains. “But with the auction being online, they can still participate. It gets us new bidders as well as extra bids.” Thomas’s bulls sell for an average of $2,800, but can bring up to $750 more when the auction streams online.

McIntosh says the real asset of online auctioning is not sales but marketing. “At the end of an auction, we give the farmer a list of contacts – everyone that bid, purchased and watched the auction,” she explains. “They’re getting a list of 500 future customers.” (DV Auctions streams a dozen or so auctions on any given day, and you can sign up to watch on a non-bidding basis.)

Broadband comes in especially handy during harvest time, when poor weather can ravage ripened crops. When storm clouds loom, farmers like Mike Haley in West Salem, Ohio, depend upon uber-local, up-to-the-minute forecasts. “By utilizing the 4G Internet connections on our smart phones to monitor the weather,” he says, “we were able to take advantage of the very few opportunities to harvest, allowing us to minimize our losses.” For farmers without a smart phone or a 4G network, or working in a distant field beyond the network’s reach, a broadband connection at the farmhouse can help preserve the harvest the same way.

Social media classes have sprouted all over the country for farmers, who, like every other sentient being these days, need to build their brands. (The use of Facebook and other platforms can also cause farmers to sugarcoat their livelihoods for public consumption.)

Michele Payn-Knoper, an Indiana farmer and ag-communications guru, helps train farmers through the AgChat Foundation, and she regards broadband as an essential tool for the modern farmer. “The bandwidth required by Facebook, uploading YouTube videos and managing today’s intense information flow is very difficult on dial-up,” she says. “Higher speed Internet makes it easier for farmers to shoot and upload a picture from the pasture or field to share with the 98.5% of the population that’s not on a farm.”

A broadband connection can also help farmers find better contracts for future crops – say, a buyer paying more per bushel of grain a few months down the road. In search of such prices, a rural Internet provider says “farmers are spending as much time on their computers as they are in their fields.”

For the farmers of today, a fast Internet connection is just as important as the railroad was a century ago, connecting to farmers in the far reaches of the heartland to the rest of the world.

Popular
7 Smokable Plants You Can Grow That Aren’t MarijuanaBrian Barth
Hell in High Water: The Story of Devils Lake, North DakotaSharlene Breakey
Record-Breaking Egg Profits Prompt Accusation of Price GougingClaire Carlson, The Daily Yonder
New Solar Panels Allow Farmers to See the LightNaoki Nitta
6 Differences Between Llamas and AlpacasAndrew Amelinckx
Explore Modern Farmer
Related
Environment, Labor, Water
California Farms and Farmworkers Attempt to Recover From Record FloodsNaoki Nitta
Books, How-To, Lifestyle
How to Turn Your Garden Into a Business, No Matter the SizeEmily Baron Cadloff
Aquaculture, Technology
Can Interactive Mapping Tools Guide Shellfish Restoration?Bridget Shirvell
Food Waste, Opinion, Politics, Technology
How Solar-Powered Refrigerators Could Cool Down Climate ChangeAbay Yimere
wpDiscuz
We use cookies on our website to give you the most relevant experience by remembering your preferences and repeat visits. By clicking “Accept”, you consent to the use of ALL the cookies.
Cookie settings ACCEPT
Privacy & Cookies Policy