How did the cowbell become, you know, "more cowbell"? 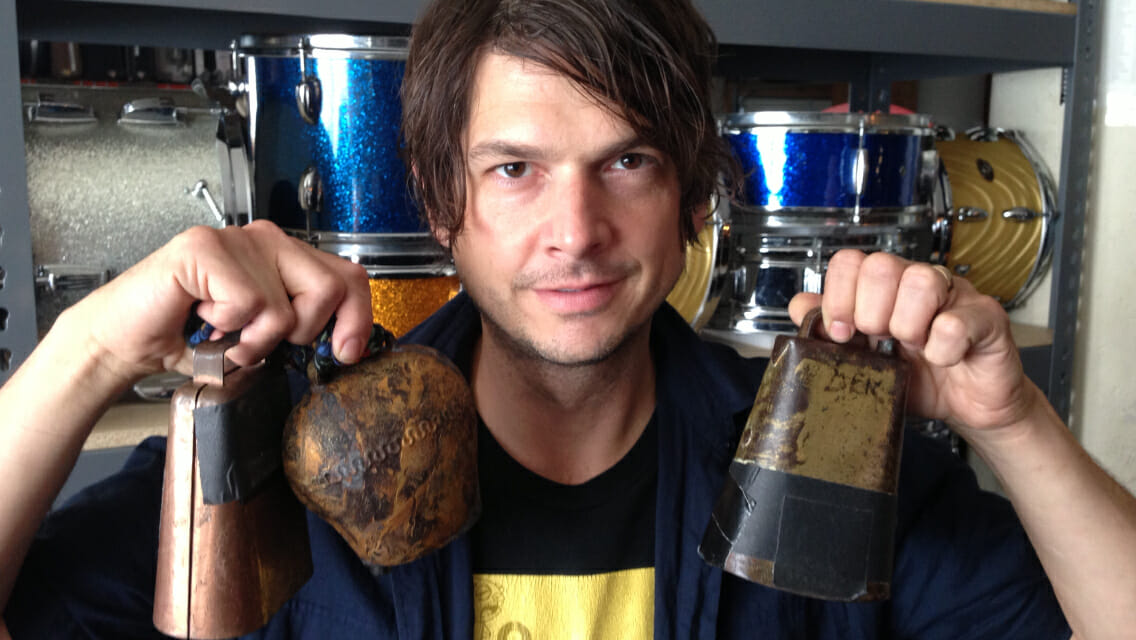 Pictured Above: Glenn Kotche, of Wilco and other projects, shows off his cowbell collection at his Chicago studio. / Mark Greenberg

But when did it start? How did we go from putting bells on livestock to Will Ferrell? It turns out that adorning animals with bells goes back 10,000 years when crude necklace charms were made from snail shells, wood, iron, brass or pottery, their clappers clanging out a distinct ping and ding. Their clatter kept track of flocks in the field and warned off predators.

These bells were tuned to differing pitches depending on the needs of the farmer. The lead animals bell resounded deeper (thus the origin of the word bellwether) and the unique jingle of a calf’s bell let a farmer know where the youngest member of his herd strayed. The sound has come to signify something deeply rural and lovely, although, admittedly, not everyone feels this way. Last year, an Englishman living in France sued his rural neighbors for “anxiety and exhaustion” associated with the sounds .

Of course, cowbells have also come to be associated with things not so bucolic.

How did the humble cowbell end up on every drum kit of rock, hair and heavy metal band, its rhythmic beat infusing the Stones’ “Honky Tonk Woman” or feigning the tick-tock of a clock in the Chamber Brothers’ “Time Has Come”?

Its path from serenity to the cult cry “I gotta have more cowbell!” from the famous Saturday Night Live skit in which Will Ferrell clangs along to Blue Á–yster Cult’s “(Don’t Fear) The Reaper” begins around 1904, according to David Ludwig, a composer and dean of creative programs at the Curtis Institute. That was the year two German composers got cowbell fever. Gustav Mahler used them to create a sense of the country for pastoral movements in his Symphony No. 6 and Richard Strauss used them in Alpine Symphony (see the percussionist jiggle them at 16:13).

Both men had spent time near country pastures in their youth, where locals celebrated the changing seasons with spring and fall cow parades called “Alpabzug” when herdsmen led the flocks through town to and from the mountain fields, their cowbells clanging in unison.

“The movement of the cowbell as something very functional in the pasture to a percussion instrument in the concert hall is pretty cool if you think about it,” Ludwig adds.

Mahler, who was considered avant-garde in his day, once said the sound of the cowbell represented the last sound heard between the journey from earth to heaven. He was known to have his percussionist walk among the orchestra, ringing a cowbell worn around his neck. Eventually, the clapper was removed, replaced by the thwack of a drumstick to better control the ring. Once in the door, cowbells never left, joining the ranks of culture.

By the 1920s it surfaced in early American music. Soon it made the leap to Afro-Cuban and Latin American rumbas and cha-chas, then jazz, finally bursting onto the rock scene as early as the 1950s, sometimes in surreal twists. The 1968 song “Grazin’ in the Grass” by Friends of Distinction boasts one of the more recognizable cowbell riffs, and while the lyrics suggest livestock munching away, it is almost certainly about smoking pot. Meanwhile, the cowbell gets back to its roots (sort of) in the 1983 Def Leppard song “Rock of Ages” which kicks off with the German-sounding nonsense “Gunter, glieben, glauchen, globen.” Although the popular heyday of the cowbell might have been in the ’70s, reaching its zenith in the ’80s, there are those who still hold it in esteem. Enter Glenn Kotche and his percussion arsenal.

Kotche is the drummer for alternative rock band Wilco and also a composer of solo percussive works who has written acclaimed pieces for and performed with the Kronos Quartet, eighth blackbird, The Silk Road Ensemble, Bang On A Can All-Stars and his duo On Fillmore.

Unabashedly delighted with the sounds made possible by cowbells, Kotche admits to possessing “several dozen” authentic animal-worn bells found in antique stores and junk shops around the world. They join the myriad of unlikely noisemakers he has employed, such as crickets or Garden Weasels, known as “inGlenntions.” (Listen to them in his Monkey Chant.) As a kid, Kotche says he saved up for a cowbell.

He says musicians use the cowbell, especially in rock, because it has the ability to distinctly rise above so many amplified sounds.

“As a drummer, I ride on things that sustain time and the cowbell is a great alternate sound source,” he explains. When performing with Wilco, Kotche uses several, and when performing solo he keeps five almglocken (which are tuned cowbells), interspersed on his kit below the cymbals. He increases them to span three octaves for his compositions.

“I’ve always used them in my rock playing, even though they can be a bit cliché, having gotten a bad rap from the classic rock hits of the ’70s,” says Kotche who lives in Chicago and has farm roots – his grandparents ran a farm and his wife’s grandparents ran a dairy farm. “I love the possibility of the bells, the melodic percussion.”

While most cowbells are now manufactured by instrument companies such as Latin Percussion in New Jersey, authentic bells are still being made, although losing ground to more high-tech methods of tracking herds, such as GPS.

Once, 30 bell manufacturers thrived in the Connecticut town of East Hampton, formerly known as Belltown. There, Matt Bevin still runs Bevin Bros. Manufacturers, founded in 1832. It’s the last remaining bell maker in town and the Bevin is struggling to make a comeback after a lightning strike in May, 2012 that burned the factory to the ground.

Bevin still makes cowbells the way he did when Belltown was thriving, although the elderly women who know the trade of tuning, and have the best ear for pitch, are dying off. Musicians who like the real thing remain customers. Bevin says young, sustainably minded farmers who are returning to more traditional farm methods still buy his cowbells. After word of the fire spread, orders came in from across the world.

Bevin explains that there are two types of American cowbells. One is “The Kentucky”, and is the largest, loudest kind. The smaller bell, called “L.D.” for “long distance” allows a farmer to hear the herd from further afield. A 10 LD, Bevin says, begets a “crisper, cleaner sound” on smaller animals while the honking Kentucky is better suited to a bull, sounding out more of a “Thunk, thunk, thunk” than a “Ding, ding, ding.”

Most cowbells will fit in the palm of of a hand. Made of steel, with four sides, a loop and a collar, cowbells look simplistic, but there are 16 steps to making them, according to Bevin. And their fate may lie around a cow’s neck, out on a field, or onstage with a famous rockstar.

“For as little as $3, today, less than a cup of coffee, a cowbell can be yours,” says Bevin.