First appearing in the U.S. in the 1700s and known as ’slops,' overalls became the uniform of the working stiff. Over time, their baggy silhouette served as an emblem worn by railroaders and depression era farmers -- as recalled in Grant Wood's American Gothic. Later, they became emblematic of 1960's hippies, college students of the ’70s, and even rappers, hip hop and other recording artists, who wore them with one shoulder unfastened. 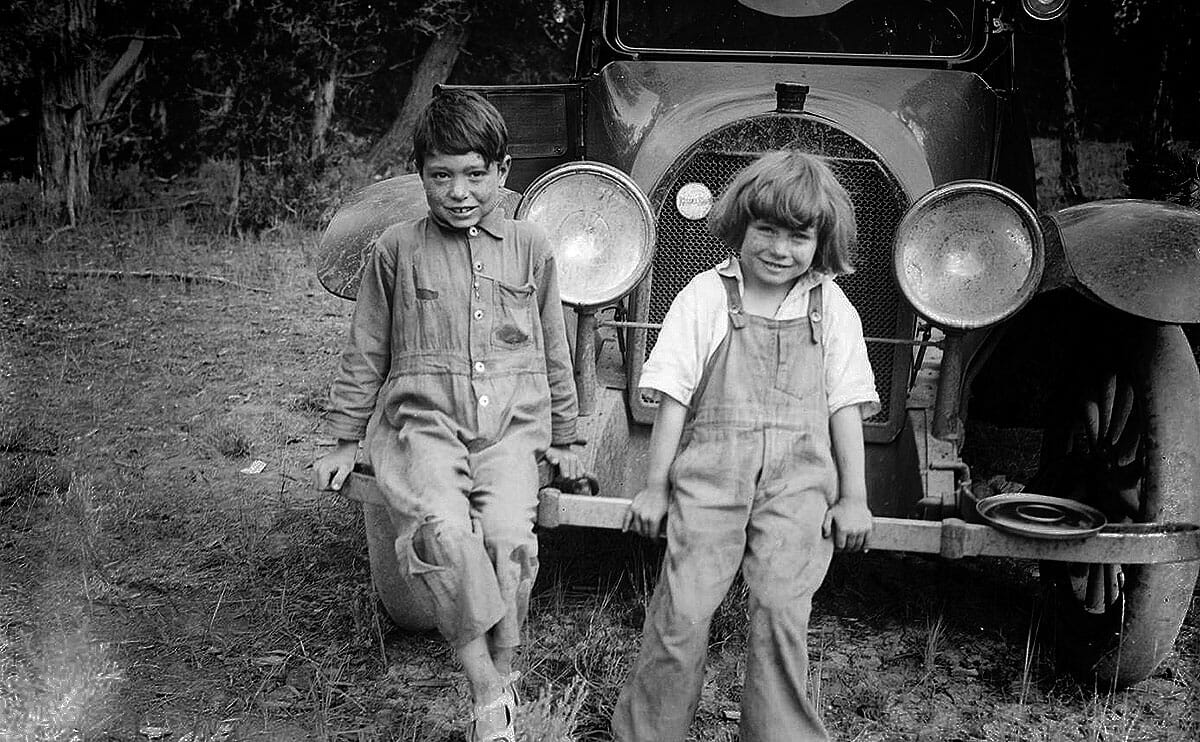 First appearing in the U.S. in the 1700s and known as “slops,” overalls became the uniform of the working stiff. Over time, their baggy silhouette served as an emblem worn by railroaders and Depression-era farmers — as recalled in Grant Wood’s American Gothic. Later, they became emblematic of 1960s’ hippies, college students of the ’70s, and even hip-hop and other recording artists, who wore them with one shoulder unfastened. Mick Jagger is no stranger to them, nor is glam rock. Jagger sported a velvety pair, studded with gems, spelling MICK and made eternal in a photo by Herb Ritts. Bib overalls are clothing for the ages.

B’gosh, there are even songs about overalls, ranging from heartbroken men and women left as sad as their overalls are faded, folk singer Malvena Reynolds’ 1956 Bury Me In My Overalls, to a folk tune called “Bib Overalls” recorded just last week by rural Missourians Jana Russon and Roy Fancher.

Bib overalls became the uniform of the working stiff, their baggy silhouette serving as an emblem of Depression-era farmers. Later, they became emblematic of hippies of the ’60s, college students of the ’70s, and even hip-hop and artists, who wore them with one shoulder unfastened.

Overalls have never fully faded from the landscape, says Dr. Paul Lasley, head of the departments of Anthropology and Sociology at Iowa State University. Rather, they wax and wane as all clothing does. Just as a cowboy hat speaks of the West, a pair of bibs once suggested ruralness and farming. But that’s rapidly changing, says Lasley, as farming is expanding into cities via farmers markets, urban farming and the rise of community gardening.

The growing concern about eating healthy and knowing where your food comes from means people are starting to meet those who grow their food, explains Lasley. And lots of times those people are wearing overalls.

Megan Paska, of New Jersey’s Seven Arrows East Farm, works and plays in bibs. The 33-year-old lead farmer notes that overalls have become a symbol in Brooklyn, worn by young residents. “They’re basically saying, by wearing overalls, that they support the new farming lifestyle, the farm-to-table movement, that they get it,” Paska says. Add to the mix a trend towards homesteading and grow-your-own, more cycling and walking — basically, keeping things simple — and it’s no surprise, Lasley says, that people lean toward a more relaxed clothing choice.

Alan Simmons, a 47-year-old farmer at Chicago’s Gingko Organic Gardens finds himself standing more comfortably when he wears overalls. “There’s no belt, the bib protects my chest and I have all of these pockets,” he says. He also references Umberto Eco’s essay Lumbar Thought, in which Eco examines, after finding himself uncomfortable in tight jeans, whether the clothing we wear impacts the way we think.

So while fashionistas shout “Overalls Are Back!” and “Buckle Up: How to Wear Overalls Right,” a group of true devotees will celebrate their affinity for ovies next month at the International Overalls Weekend in New Orleans. Attended by bib fans from around the globe, the festival is the brainchild of Niels Windfeld of Thyholm, Denmark who writes a blog called The Bib Professor. A former university professor who bought his first pair of overalls from a Mission District thrift store while on sabbatical at the University of California, Berkeley in 2001, Windfeld posts about life in overalls.

The idea for the blog came in 2007 as he sat at his rural farm pondering whether there were others who shared his delight in overalls, he says. After a Google search (which included terms like “overalls,” “overall wearers,” “bib enthusiasts” and “I love my overalls”) Windfeld began contacting everyone who wrote about his favorite clothing choice. In fact: Megan Paska, the New Jersey farmer, got a note from Windfeld. He was going to be in New Jersey. So when he arrived, Paska and a host of other wearers gathered for coffee.

Now with followers ranging from ages 17 to 70, Windfeld’s blog has forged friendships around the world. Some are new to wearing overalls, while for others life without a pair would simply feel less adventurous.

Laury Bourgeois, a native of New Orleans who spends part of the year renovating an old stone barn in France, is hosting the International Overalls Weekend. Bourgeois, whose name doesn’t quite match her ensemble, says she began wearing overalls long ago; they’ve, in effect, become her uniform. In them she “feels free,” she says. “They fit in with the simplicity revolution.”

Tammy White, who with her family works Shaftsbury, Vermont’s Wing and a Prayer Farm, wears a pair of overalls embroidered with carrots, radishes and daisies. “Overalls are inspiring,” White, 49, says. “There are days when I yearn to have a pedicure and wear something dainty,” she adds. “But this is my daily outfit. They are soft with wear and have patches. Overalls, to many, speak of a hard work ethic. Overalls are inspiring. They say ‘I get the job done’ just like Wonder Woman in her outfit.”

‘These bib overalls were his favorite for a time, they were his work pair. But he also had dress overalls that he would wear to the fair.’

In one of his many Google Image searches for overall loyalists on The Bib Professor, Windfeld came across the story of William McKale. Among a screen full of photos of overalls and their wearers is one of a pair, faded to light blue, dotted with patches and soil. Click on the picture and up comes the story of Dale “Pete” McKale, a farmer from Longford, Kansas who began farming during the Great Depression.

“I remember seeing him in these,” McKale’s son William says. “They were his favorites for a time, they were his work pair. But he also had dress overalls that he would wear to the fair.”

In fact, William brought the bibs to the Kansas History Museum in 2003 after finding them hanging on the basement hook where his father kept them season after season after both his parents passed away. Having seen his father wear the overalls for much of his life, William couldn’t retire the pair to the dustbin. So instead he walked into the museum and asked if they’d like a pair of used farmer’s overalls. They were made by Key Industries, after all, which is right from Kansas.

where is cheap bib overalls black