Farm-to-table may be trendy elsewhere, but at the state fair, it's strictly about the fried, fatty, and fanciful. 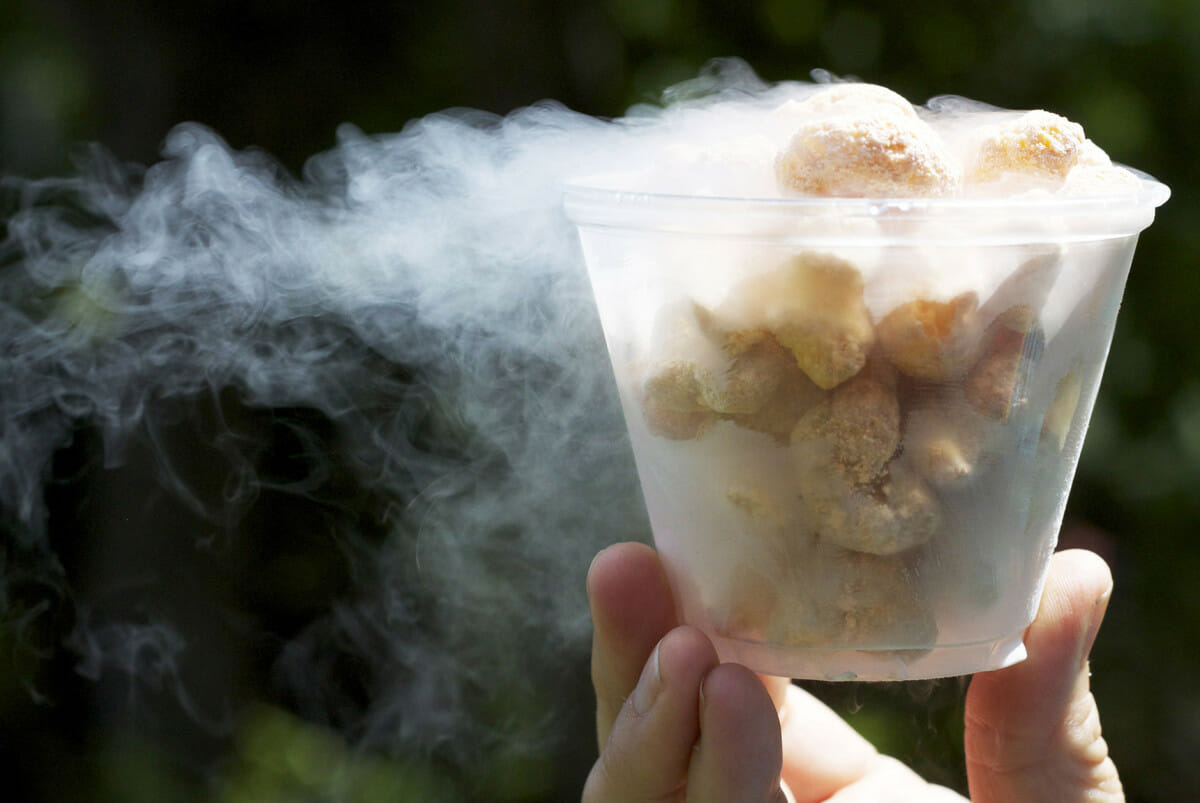 One man, a repeat customer on his second cup, swears he can detect a hint of Goldfish crackers.

The subject of the debate is one of the Minnesota State Fair’s newest foods, Comet Corn, a liquid nitrogen-dipped snack that bills itself as “a futuristic caramel corn.”

Behind a glass counter, a woman ladles out cup after cup of orange-dusted popcorn, swirling white clouds of vapor in the air. A quick breath out after the first bite yields a little puff of steam (“comet dust,” they call it) as though instead of a muggy 90 degrees, the air had gone suddenly crisp.

As she hands me a cup, the saleswoman warns me to wait five seconds before I eat it.

“Or else it’ll freeze to your tongue,” she says.

I take a bite. Corn pops, Fritos, and cold popcorn are all a little bit correct, but the flavor is perhaps most like Captain Crunch cereal, frozen, with dashes of salt and maple syrup thrown in.

Geography may be front and center at state fairs, but if you’re looking for the local specialties, don’t head to the food stands. Farm-to-table may be trendy elsewhere, but at the state fair, it’s strictly about the fried, fatty, and fanciful.

Farm-to-table may be trendy elsewhere, but at the state fair, it’s strictly about the fried, fatty, and fanciful.

All across the country, summer means state fair season, and each fair comes with its own state traditions, local draws and, of course, its own foods, found only at the fair. Corn dogs, fried candy bars, even locally grown roasted corn are perennial fair favorites, but every year there is fierce competition among state fair chefs to come up with a new fair classic to rival the success of the old favorites.

Comet Corn, along with fried pickles and chocolate, peanut butter and bacon nuggets, grilled glazed donuts, candied bacon cannoli, bacon-wrapped riblets, and a wine-glazed, deep-fried meatloaf are just some of the new foods debuting at state fairs nationwide. At the Minnesota State Fair alone, 47 new foods will be vying for fairgoers’ attention this year.

Flavor profiles of new fair foods vary widely. Though an unorthodox approach to food pairing, the liberal use of a deep-fryer, and creative uses of bacon are all popular, each vendor has a different take on just which blend of flavors will yield a hit.

“It’s cheesy, salty and crunchy. A lot of people seem to like that,” says Carol Helmer. And that’s what she went for in her Deep Fried Olives, an unlikely breakout star of the Minnesota State Fair, consisting of a quartet of briny green olives, stuffed with cream cheese, and fried on a stick.

Eric Campbell came up with the idea for his Double Bacon Corndog (a fried bacon-wrapped hotdog, which is also tucked into a bacon-studded corndog crust and fried a second time) after long hours spent watching the Food Network. Bacon is always a good bet, but just as important, he says, is the sweetness of the batter.

“The sweeter the corndog batter, the more of a home run it is,” says Campbell.

Sales for food at the Minnesota State Fair last year topped $30 million dollars, the majority of which was spent on traditional favorites. But there’s always the possibility of a new breakout star – and the possibility of an upswing in sales for vendors.

Sales for food at the Minnesota State Fair last year topped $30 million dollars, the majority of which was spent on traditional favorites. “I do a top ten list of foods every year and those ten foods make up almost half of our sales,” says Dennis Larson, concessions manager of the Minnesota State Fair. “We talk a lot about the quirky new foods, but rarely do they gravitate to the top ten. People come to the fair to eat what they were raised on: corn dogs, ice cream and cookies.”

But there’s always the possibility of a new breakout star – and the possibility of an upswing in sales for vendors. Organizers have seen rises of between 50 percent to more than double the previous year’s profits with a hot new food. “But we never really know where lightning is going to strike,” says Larson.

Of course, even getting into the fair in the first place can be viewed as a win.

To be accepted as a new vendor, there’s a process that Larson likens to a job application. Applicants must submit a detailed written plan specifying their previous experience, plans and description of the new food. A taste-test, says Larson, isn’t usually even required. What they’re looking for is a solid plan, a track record of success and, of course, something that will make a splash. “You only get in the fair if you’ve got something new,” says Larson.

“It’s one of the toughest state fairs to get into,” says Campbell, a new vendor to the Minnesota State Fair, whose application to get into the fair included a 14-page dossier on his Double Bacon Corndog. “You have to have something unique.” It also helped, he says, that he was able to show previous success, first at the Calgary Rodeo and Stampede and later at the Iowa State Fair.

On the other end of the spectrum is Texas’ state fair, where the pre-fair taste-test has become part of the spectacle of the fair.

‘It has an entertainment aspect, the food out here. For a lot of people, it’s a time to throw caution to the wind and try something new.”

Each year, almost a month before the fair in Texas kicks off, food vendors trickle onto the grounds toting deep fryers, parcels of ingredients and secret recipes for The Big Tex competition – named after the fifty-foot-tall cowboy statue that stood guard over Texas’ fairgrounds, until it was taken down by an electrical fire last year – which pits the top ranked new foods against each other for bragging rights. There, the top eight foods (pulled from a group of more than 50 applications) square off in front of a panel of judges, with awards passed out for best overall taste and most creative.

“We jokingly call it a friendly food fight,” says Sally Wamre, a spokesperson for the State Fair of Texas.

And, just like in Minnesota, the stakes are high. Last year, Texas’ fair took in over $36 million for food and amusement park rides. Wamre estimates that placing in the final-eight at the Big Tex competition could mean a boost of 100,000 additional items sold at that year’s fair.

Abel Gonzales, owner of fan-favorite Big As Texas, and a familiar face at the Big Tex competition, has struck deep-fried gold again and again at the State Fair of Texas. He is a finalist at this year’s Big Tex with deep-fried Nutella wrapped in a phyllo dough crust. But before that came a deep fried peanut butter and banana sandwich (as inspired by Elvis), deep fried coke, fried cookie dough, fried jambalaya, and, in perhaps the purest possible synthesis between fryer and taste buds, deep-fried butter, a snack that snagged him both a finalist spot and a “Most Creative” award in the Big Tex competition.

“You can really over-think this whole process,” Gonzales says. “You have to go with an idea.”

Not every idea works. Gonzales recalled a couple of experiments that never made it out of his test kitchen, among them a deep-fried cotton candy that crumbled at the touch and a fried peppermint stick with a flavor he describes as “truly horrible.” But the experiments are part of the process.

“It has an entertainment aspect, the food out here,” says Wamre. “For a lot of people, it’s a time to throw caution to the wind and try something new.”

(All photography courtesy of the Minnesota State Fair.)