Farmivore: Ice Cream of the Crop

The Penny Ice Creamery in Santa Cruz jumps through crazy regulatory hoops to make their own ice cream base, all in search of the perfect scoop. 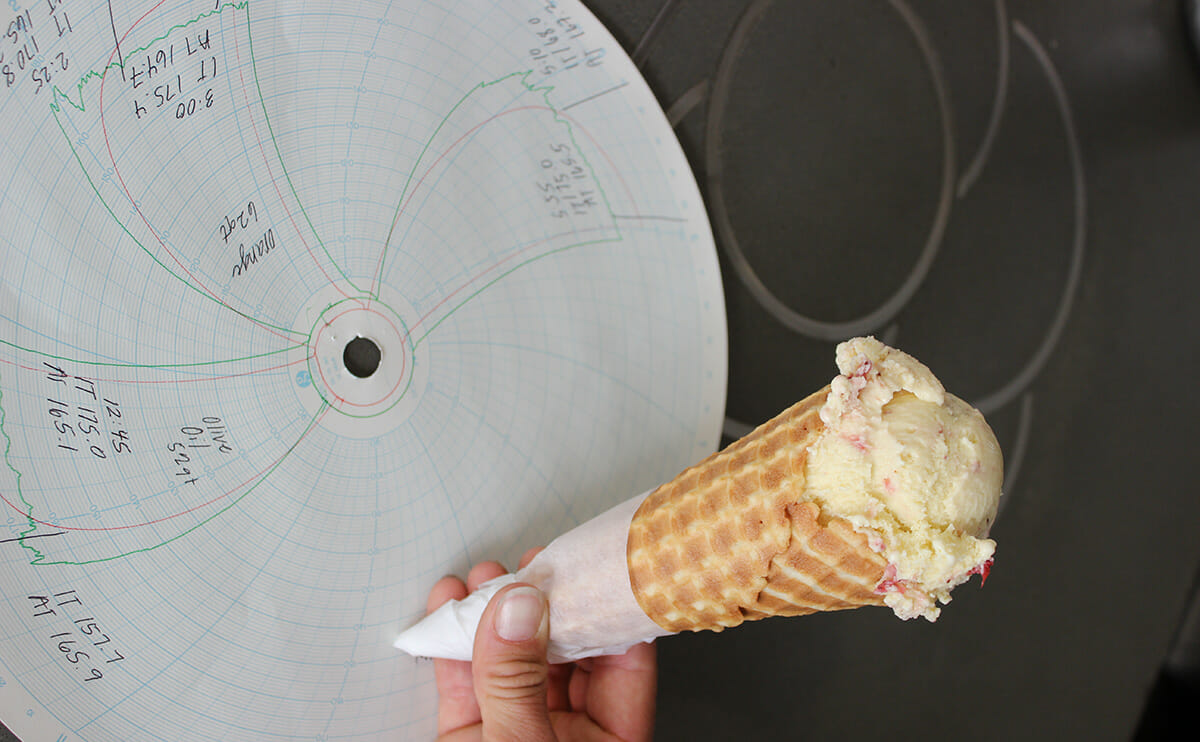 Every restaurateur deals with the local, state and federal laws of their country, at almost all levels of operations. And most make sense: you want the employees to wash their hands, for instance. But in other ways, consumers are shielded from the impact of regulatory decision-making.

Take artisanal ice cream. We are living in a golden age of the stuff – a new Ice Age, if you will – with gourmet ice cream shops all over the world serving incredibly creative flavors. But in spite of the artisanal quality and price of these ice creams, in the United States, almost all independent scoop shops depend on pre-made commercial base, thanks to pasteurization laws that are so complex as to be nearly prohibitive.

But some persevere, claiming that the base ingredients make a big difference when it comes to the end result. For perfectionist ice cream makers like Kendra Baker, of The Penny Ice Creamery in Santa Cruz, a spot personally approved by Joe Biden, the extra effort required to make ice cream from scratch is more than justified by the freedom to adjust the base for each flavor. To make Black Sesame ice cream, for example, Baker uses less cream and more sugar to counter the natural oiliness and bitterness of sesame; at the other end of the spectrum, she amps up the cream and reduces the sugar in her Stout flavor, so that the alcohol doesn’t cause the ice cream to melt in the display case.

Before opening The Penny Ice Creamery, Baker was the pastry chef at two-Michelin-starred Manresa Restaurant, where she made small batches of ice cream from scratch. And she continues to build on the techniques she developed as a pastry chef, while drawing on an old-fashioned appreciation of ice cream. “Because we don’t homogenize our base, you get that real authentic ice cream feel,” Baker explained. The homemade base makes the biggest difference in the texture, which Baker describes as “what ice cream should feel like – what we used to get in the hand crank.”

The federally mandated definition of ice cream specifies that “ice cream contains not less than 10 percent butterfat” and it demands that dairy used in ice cream must be pasteurized, either for thirty minutes at 155 degrees Fahrenheit or 25 seconds at 175 degrees. The regulation of this pasteurization is left to the states. California requires any business selling more than a thousand gallons of dairy per year to maintain its own clean room, which is a miniature version of the pasteurization chamber at a dairy manufacturing plant. An old-fashioned analog chart recorder measures the temperatures of both liquid and air in the pasteurization chamber, and anyone operating the machinery must pass a written and oral exam (with a drawing component!). Officials from the California Department of Food and Agriculture visit the Penny Ice Creamery at least quarterly, and the inspections are no joke – penalties for tampering with pasteurization records are punishable with prison time.

And, like all bureaucracy, these rules invite absurdity. The shop doesn’t buy raw milk, instead getting pasteurized cream, but California law forces them to further pasteurized the already-processed dairy before using it – even though statistically, already-pasteurized milk presents a very low risk to public health.

Complying with agricultural standards is not the only hurdle The Penny Ice Creamery has overcome. Baker and her partner, Zachary Davis, launched their business in 2009, during the depths of the recession, and when they posted a video expressing their gratitude for the small business loan they received through the stimulus package, it got more than 100,000 views. The White House responded with a video of Vice President Biden calling Baker and Davis to congratulate them on their success (“I’m a genuine lover of ice cream,” Biden told them. “I don’t drink, I don’t smoke, but I eat a lot of ice cream.”) and a few months later, the First Lady invited Baker and Davis to be her guests at the 2011 State of the Union address, leading some to speculate that Biden is not the only ice cream lover in the Obama administration.

Of course, working with food always requires compliance with health and safety regulations, from hand-sinks to hair nets, not all of which are perfectly written or enforced. Baker and Davis has made a virtue of necessity, displaying the pasteurization process through windows into the clean room and building a reputation as can-do business owners. Since opening in 2010, Baker and Davis have added two more ice cream locations and a sandwich shop called The Picnic Basket – and The Penny also plays an important role in a larger ecosystem of small businesses in the area, particularly farms. Making ice cream from scratch provides the flexibility to incorporate whatever produce is abundant in a given moment, and farmers know that the ice cream makers can often find a place for produce that hasn’t sold elsewhere.

For example, there’s Dirty Girl Farm, which sells strawberries, tomatoes, and vegetables at the Santa Cruz Farmer’s Market. Farmer Joe Schirmer believes that customers like to see an overflowing bounty, so he always picks more than he can sell at the market, because The Penny Ice Creamery is just two blocks away, and they’re happy to make sorbet from his extra berries. “Composting strawberries is painful for me,” Schirmer said. “Cabbage, kale: fine, they can be worm food. But strawberries… ” He winced. In the previous ten days, The Penny Ice Creamery had taken fifty flats of Dirty Girl’s strawberries.

The ice cream makers also like to support small local farms by buying unusual and small-yield crops, like the citrus fruits from Abounding Harvest Mountain Farm in the hills just north of Santa Cruz, where Daniel Paduano lives in a beautifully bright blue converted silo with his family. We toured the grove, plucking fruit to sample–everything from fragrant bergamot and Buddha’s hand, to Genoa lemons, which appeared in a sorbet that Baker said tasted just like iced tea (the secret is using the peel). We admired the sweetness of the Jincheng oranges, but Baker noted that she really needed more acidity to counter the sugar in ice cream base.

The Penny Ice Creamery wants to spread the gospel of homemade ice cream. About twice a week, Baker and Davis hear from people looking for advice on starting their own business making ice cream from scratch and they are happy to offer advice. As Baker says, “I just want to band together and nerd out on ice cream.” Meanwhile, Davis has his own perspective: “Look, we figured out the regulations, and I think a lot of other people could, too, but creating a recipe and navigating changes to ingredients through the season – that’s what Kendra does and not everyone can do.”