Our publisher tries new cookbooks and decides if they’re worth the investment. 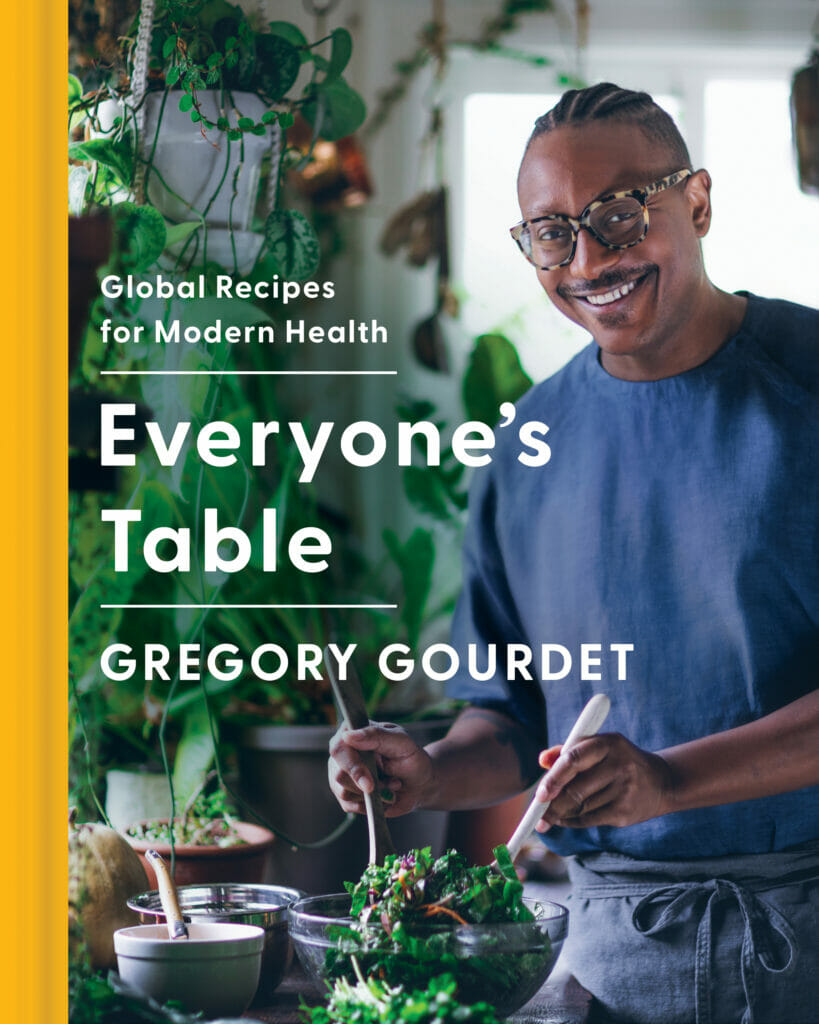 As publisher of Modern Farmer, I get a lot of cookbooks sent my way. As I add them to my large collection, I always ask myself how so many books ever find an audience.

I am a passionate cook and I do get excited when I run across a new recipe that is both unique and delicious. But the number of ingredients I can ingest is finite. And it’s not often that I run across a recipe that I feel is a show stopper.

I always enjoy the backstory of cookbooks and what motivated a given chef toward a certain cuisine, philosophy or style. If I find the story interesting, I look more closely at the recipes, which is what I did with chef Gregory Gourdet’s new book, Everyone’s Table: Global Recipes for Modern Health.

Gourdet, the son of Haitian immigrants, grew up in Queens. He dropped out of pre-med and enrolled in the prestigious Culinary Institute of America, before he eventually lucked out with his first job at New York City’s Jean-Georges flagship restaurant.

His early years weren’t easy, though. Around this time, Gourdet also fell into an intense multi-year spiral of drug and alcohol abuse. When, years later, he eventually had his “aha” moment, he did what many recovering substance abusers do. With equal intensity, he plunged into health and fitness: yoga, CrossFit and jogging.

His cookbook contains 200 recipes that are free of gluten, dairy, soy, refined sugar and legumes. A lot of them are Paleo-friendly with a focus on superfoods (high nutrients, best fats, with most minerals and antioxidants). Having lived my own life on the Mediterranean diet and having conducted my own six-month experiment as a vegan, some of these recipes piqued my interest (except for the excluding legumes part). A lot of his recipes have a Haitian influence and I love Haitian food, which is often spicy. He even mentions Haitian spicy peanut butter, which my foundation produces as part of its poverty alleviation work in Haiti.

I browsed through all the recipes and decided to try my hand at his Poule Nan Sos dish. I love stewed chicken dishes and it’s not often I make ones that are spicy. 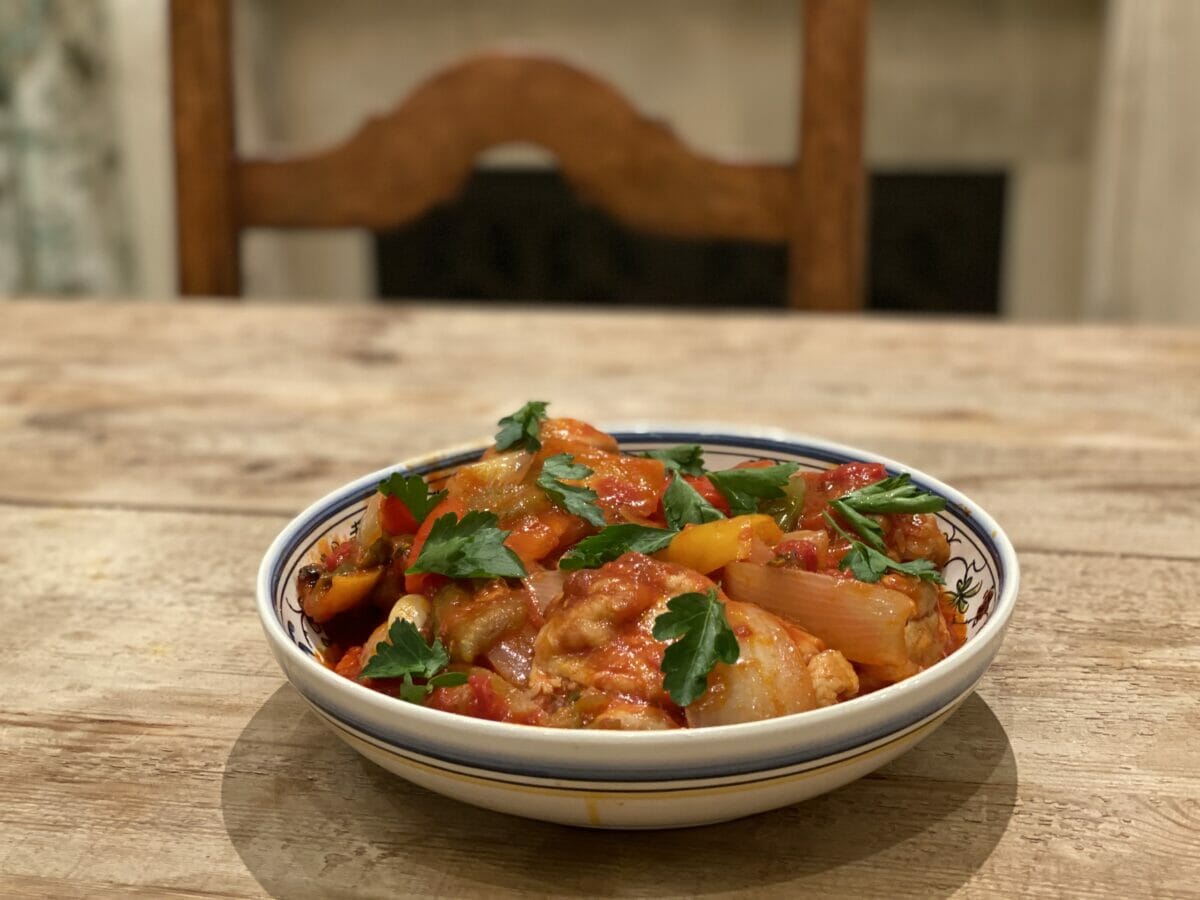 I followed the recipe instructions carefully, but I made a judgment call to add canned tomatoes to the tomato paste for which the recipe called. The 1/2 cup of paste seemed insufficient for the three pounds of chicken. It turned out to be a mistake as the end product was more watery than it should have been. Also, the peppers we purchased weren’t nearly hot enough, so the dish didn’t get the kick it deserved. Having said that, the flavors were delicious and I would recommend trying this dish for yourself. 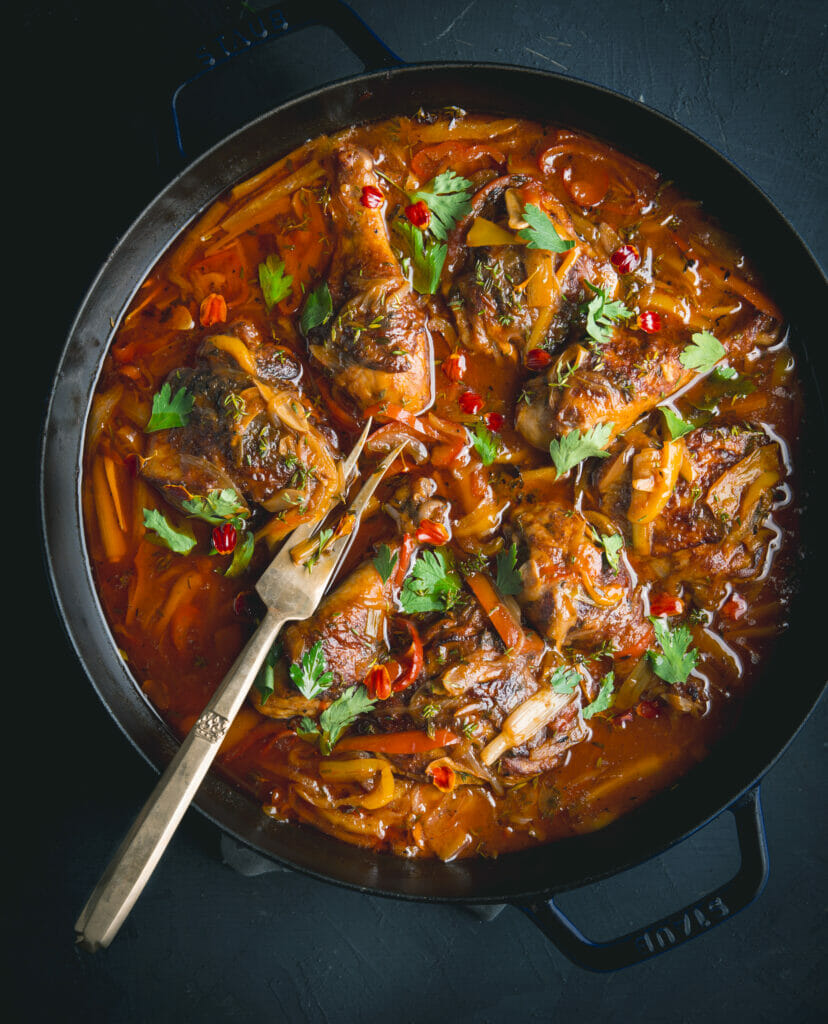 When I was a kid, we often left Queens on Sunday mornings to visit Mémère, my paternal grandmother, in New Jersey. Along with warm kisses and a few words of broken English, this chicken stew would greet us. Its official name (poule nan sos in Haitian Creole, or “chicken in sauce”) is quite an understatement. The meat is marinated
overnight with onions, garlic, thyme, and chiles along with citrus, the fruits juiced and then rubbed forcefully onto the chicken to access the fragrant oils as well. After the meat takes on all that flavor, it’s stewed with the marinade and loads of bell peppers for a satisfying, thrilling stew. This dish is Haiti, something we make time and
time again. I suspect you will, too.

MARINATE THE CHICKEN
Put the chicken pieces in a large bowl and season with the salt. Squeeze the citrus halves over the chicken, then spend a minute or so rubbing the cut sides of the citrus against the chicken. Add the onions, garlic, chile, and thyme and toss well, rubbing the chicken as you do.
Cover and marinate in the fridge for at least 12 hours or up to 48 hours.

MAKE THE DISH
Preheat the oven to 375 ℉.

Remove the chicken from the marinade, guiding any stuck-on aromatics back into the bowl. Set a strainer over a small mixing bowl.

Pour the marinade through the strainer, reserving the solids and liquid. Pat the chicken very dry with paper towels.

Heat the oil in a wide heavy, ovenproof pot (I use a 31/2-quart braiser) over medium-high heat just until shimmery. Cook the chicken, skin-side down, occasionally turning the drumsticks but not the thighs, until the skin is deep brown about 8 minutes. Transfer the chicken pieces to a plate.

Reduce the heat to medium-low, add the tomato paste and salt, and cook, stirring often, until it turns several shades darker, about 3 minutes. Add the bell peppers and the reserved solids from the marinade, and cook, stirring occasionally, until the peppers soften slightly and take on a little color, about 8 to 10 minutes.

Return the chicken to the pan, skin side up and in a single layer, then take a minute to pile the peppers, onions, and other aromatics on top of the chicken. Then evenly pour in the reserved liquid from the marinade along with the stock. Cook in the oven, basting every 15 minutes to coat the chicken with the peppers and sauce, until the sauce has thickened slightly and the meat pulls off the bone with a gentle tug from a fork, about 1 hour. Garnish with the parsley and serve.