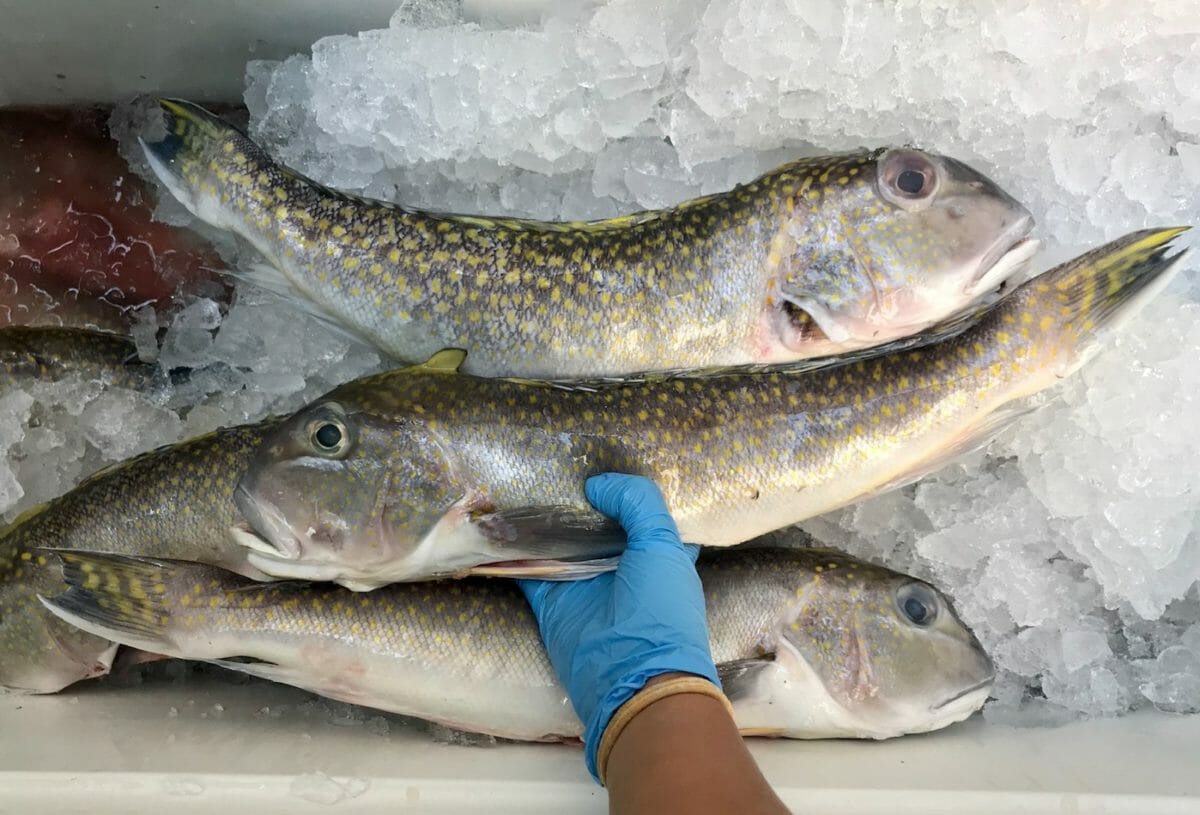 It might come as a surprise to many that most of the seafood eaten by Americans was not caught by American fishermen (or fisherwomen).

We import most of the shrimp, freshwater fish, tuna and salmon, (to name a few) consumed by Americans from China, Thailand, Canada and other countries. The National Oceanic Atmospheric Administration estimates that 90 percent of the seafood consumed in the US is from abroad.

In Philadelphia, a college professor and a small cohort of students are looking to change this by attempting to rejig local supply chains. Their organization, Fishadelphia, the city’s first Community Supported Fishery program, hauls and packs seafood for members, in the hope of connecting them to American fish producers.

Talia Young, a visiting assistant professor of environmental studies at Haverford College, founded Fishadelphia in 2018 as a bi-weekly after-school program at the high school she used to teach science at. Young, a Chinese American, says she started the program after noticing a disconnect between US producers and multicultural communities while being embedded in local seafood movements through her academic research.

“People in the industry talk to me about seafood and often say things like, ‘Americans don’t really know how to eat seafood,’” she says. “They’re just not talking to the right Americans… I know a lot of people who eat a lot of different kinds of fish and have very deep and rich historical and contemporary relationships with seafood and they’re mostly Asian and Black.’”

Through its students, based in the culturally diverse neighborhoods of North and South Philadelphia, Fishadelphia taps into communities where seafood fisheries on the coast of New Jersey wouldn’t typically have access. The organization is funded through a number of federal and state grants. Over the past two years the organization has signed up 250 members to its Community Supported Fishery program and has bought more than 30,000 pounds of seafood from seven local producers.

Young says there will be anywhere from 12 to 20 students working or volunteering for the organization at any given time. Students pack fish, liaise with customers, and manage finances, among a number of other tasks. The organization hires students after they volunteer for one semester, if they choose to stay.

Wen Xin Weng, a recent high school graduate, has been with Fishadelphia since Young launched the organization. She now works part-time for the organization managing customer orders and bookkeeping. Weng says she was able to help source Fishadelphia orders into the Chinese community through a WeChat group she started two years ago. The group has grown to 50 Fishadelphia CSF members.

“It’s important that people know where their fish and seafood comes from,” Weng says, adding that she will often translate student-made Fishadelphia posters about the local seafood businesses and how the product is sourced. “We want people to have local fish and think it is a reliable source… We also want to introduce those farmers and all the people in the chain to our customers… It connects people.” 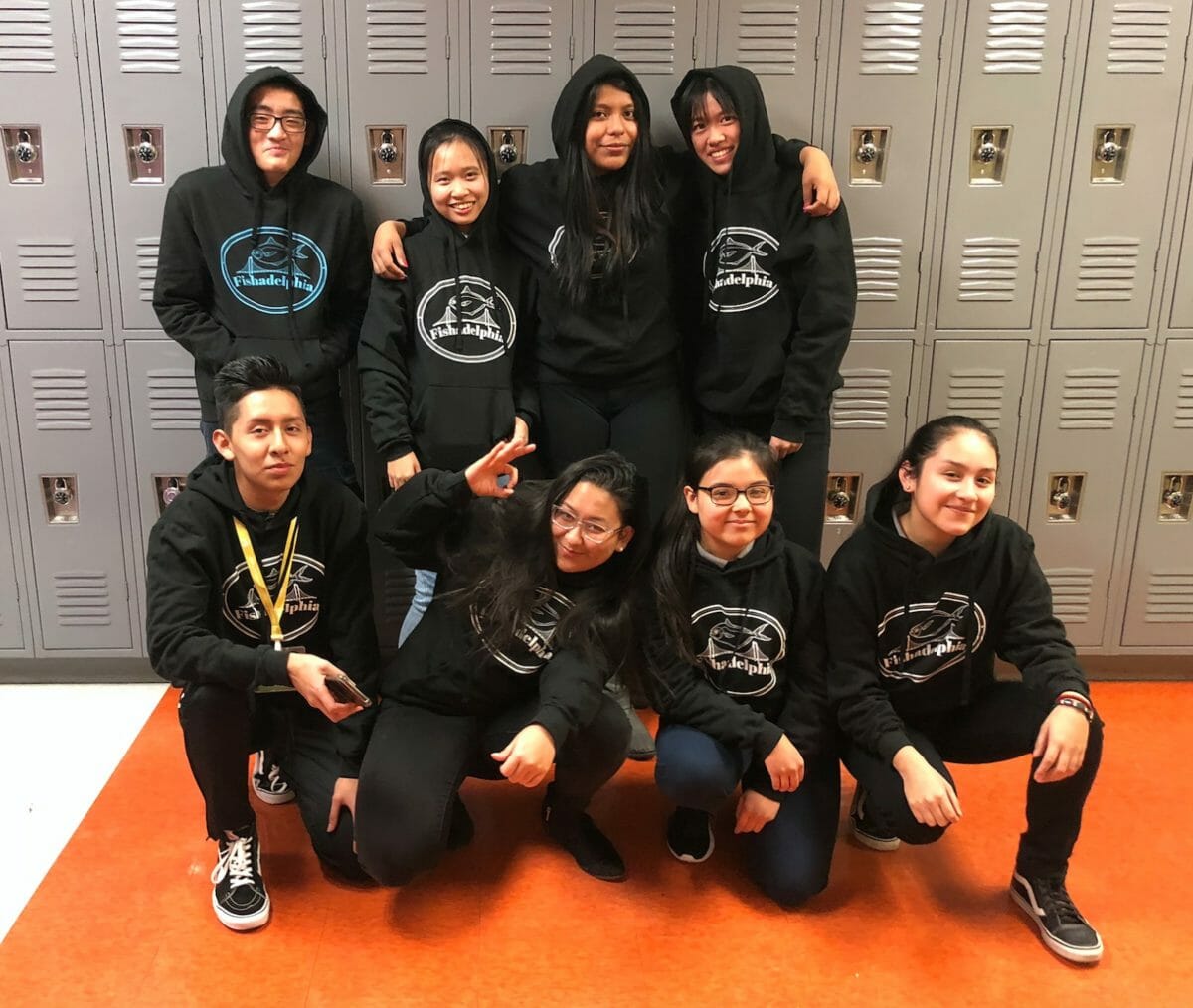 The amount and types of seafood offered through Fishadelphia shares vary based on what’s in season and what membership customers subscribe to. A share could contain anything from oysters and eels, clams and monkfish to squid and flounder.  To ensure their product is as accessible as possible, parents with children and residents eligible for food stamps can subscribe at a discounted rate. Regardless of what the customer buys the share at, Young says she always pays the fish farmer the amount they ask for.

Lisa Calvo, who owns and manages Sweet Amalia Oyster Farm on Delaware Bay, provides a percentage of her oysters to Fishadelphia. While Calvo relies primarily on restaurants and pubs to purchase her oysters, she says it’s been helpful to have an additional customer base through Fishadelphia, particularly during the pandemic.

“Any endeavor is made richer by having a diverse team and a team that brings different perspectives,” she says. “Fishadelphia has created a really special platform in terms of reaching in minority audiences that I may not otherwise I’ve been in contact with.”

Young says in the future she would like to collaborate with farmers, like Calvo, to offer a Fishadelphia internship so that students have the opportunity to work alongside farmers and fishermen to acquire a more hands-on education in local seafood.

And at a time when the country feels increasingly polarized in every way, Young hopes that a love of seafood is something that can foster a connection between local seafood producers on the coast and culturally diverse communities in urban Philadelphia.

I want to know as specifically as possible where the product was harvested. If possible are samples lab tested for heavy metals and pesticides or otherwise vetted for safety? Our local waters are questionable. I am a cautious person and a NJ CSA member.