This Modern Farmer Turned His Concrete Backyard Into A Food Forest 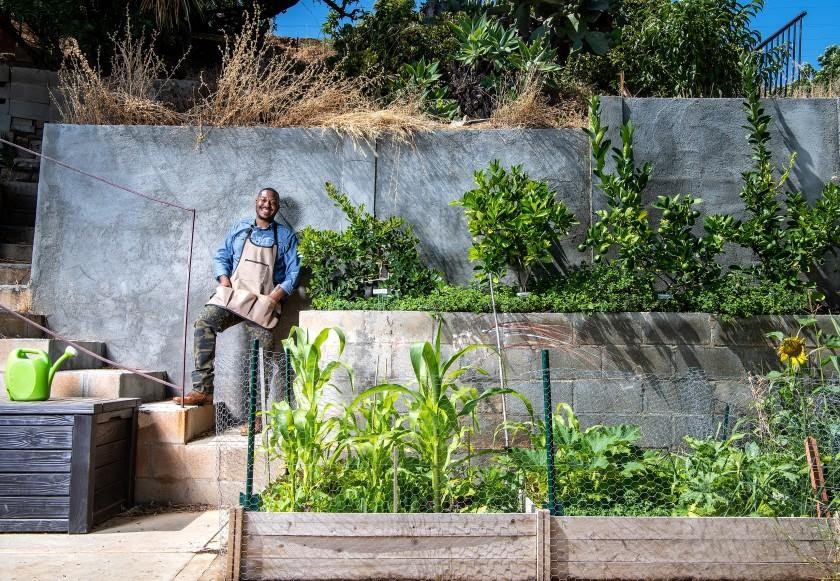 In March, Ken Sparks repeatedly mulled over a question that many Americans were grappling with: Will the pandemic disrupt our food supply?

Sparks, who has been gardening since he was five years old, refrained from common panic buying frozen pizzas and Kraft Dinner, and instead turned to his 3,000-square-foot backyard in Los Angeles. He decided to transform the dead grassy hill, with two pomegranate trees and slabs of concrete into a large-scale growing operation for fresh fruits, vegetables, herbs and spices.

“Growing food… this is like a lost art. It’s something that we used to do and we should be doing as a culture,“ says Sparks, who has led community gardening initiatives as former president of Ohio State University’s Minorities in Agriculture, Natural Resources and Related Sciences. “You know exactly what’s going into your body. You’re growing it yourself in your yard. It’s great. It’s a good feeling.”

From March until June, Sparks cleared out tufts of dead grass, planted climate appropriate plant varieties and assembled six cedar raised beds over the bare industrial pavement. The result is what he calls his own personal food forest. It’s blooming with clusters of edible plants from apple trees and peaches to lemons, limes and apricots. He’s also equipped with a wide selection of seasonal vegetables, lesser-known gems like African blue basil and flock of seven chickens that trot around the space.

He’s certain he’ll have an abundance of produce, as he has strategically chosen foods that will provide him with a rotational harvest throughout California’s year long growing season. Sparks will pick crops like apples, pomegranates, squash and peppers in the fall. Citrus, herbs, collards, turnips and beets are a few examples of what will be harvested this winter. Loquats, lettuce, mustards and kale are on the menu for spring while peaches, nectarines, pears, corn and cucumbers will be hauled out of his growing space once summer rolls around. 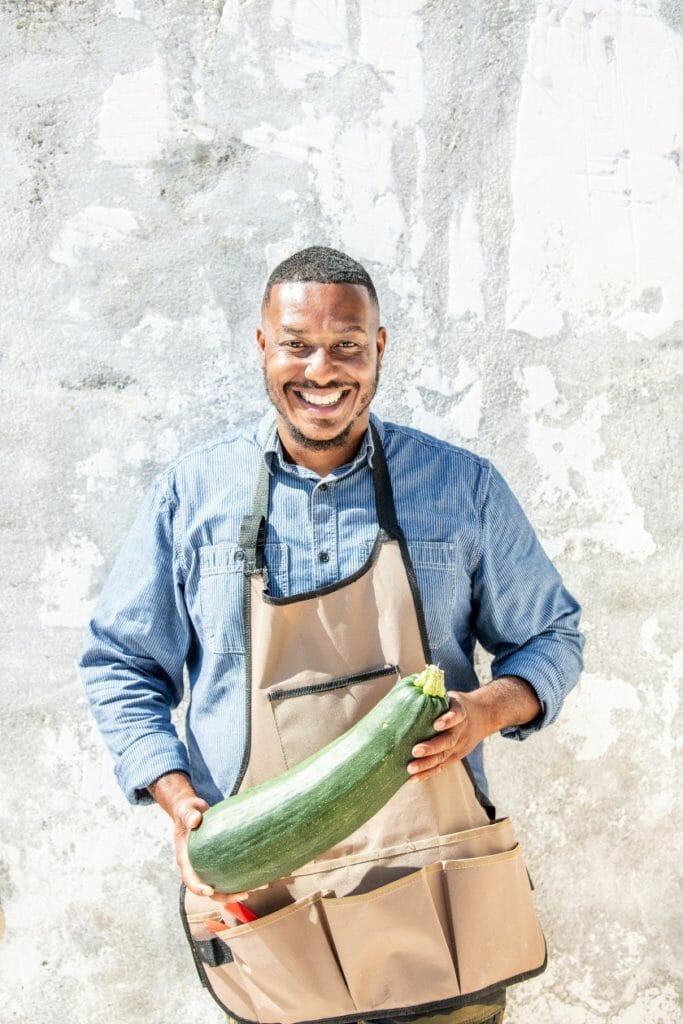 Before the pandemic, Sparks was working full time as a musician and production coordinator in television and film. But when the entertainment industry disappeared overnight, he started to think about other options. Building his food oasis became a full-time focus and the precursor for his new business, The Farmer Ken, which he launched in June. Once he started building his food forest, friends started reaching out to ask him for gardening advice. In his new venture, Sparks is working as a garden consultant for those who want to start or expand their own garden.

“A lot of people have realized in the pandemic that they need to be able to sustain themselves. I grew up with my family doing that,” he says. “Growing things from seed, taking care of them and nurturing them and watching them grow and getting your harvest at the end is very rewarding. It’s something we should all do.”

For the time being, Sparks is conducting meetings with clients over Zoom. He says he’s helped more than 20 people in the LA area using the video-calling platform. Sparks hopes to add a community gardening component to his business sometime in 2021. He has started a fundraiser to build community gardens in areas that struggle with a lack of access to fresh produce. He hopes to host courses on best growing practices and how to cook your harvest.

Despite the seemingly turbulent state of the world, Sparks says one silver lining has been the fact that people are returning to simple pleasures like growing food. Being able to help others discover the joy of gardening and the power of self-sufficiency, is all the reassurance he needs to know he’s on the right path.

Your garden is inspiring!

Nicely done! Back breaking, but what a reward — self sufficiency & healthy eating for years to come.

I am smiling big after reading your story. I wish there were more photos and some that show the chickens!

Would be good if these tips expand to include outside LA

Your garden look unique. I have never seen the same garden before. However, I really fall in love with your garden. Keep hard working on that.