Which Farm Animals Can Catch COVID-19?

Let’s look into the current research on livestock and the novel coronavirus. 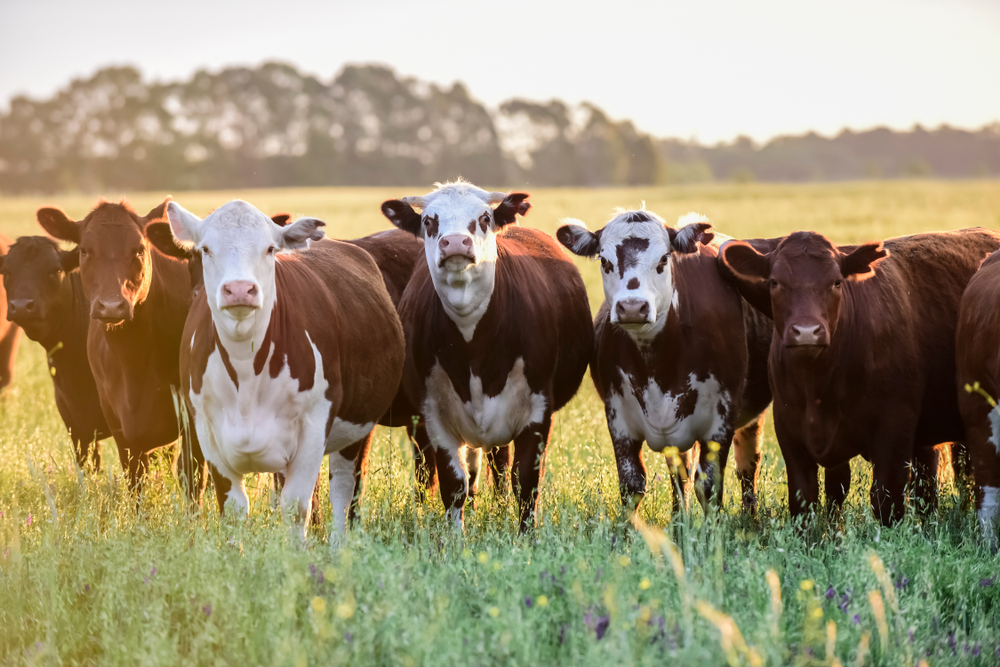 It seems unlikely, or impossible, that you can catch COVID-19 from cattle.
Photography by Foto4440 on Shutterstock
Share
Tweet
Pin
Email

COVID-19 has impacted all of our lives. But what about the lives of the animals we depend on?

With just under 100 million head of cattle, around 75 million hogs, and several billion chickens in the United States, food animals outnumber American humans by a significant amount. Because COVID-19 likely originated in an animal, it makes sense to look into how animals are affected by the virus. So what does the current research say?

A recent, but very small, German study infected six cows with COVID-19, after which two tested positive, indicating that the virus had taken hold in their bodies. Other coronaviruses have been documented in cattle before; bovine coronaviruses, as they’re called, are fairly common, and can cause very nasty symptoms in cattle, including respiratory and gastrointestinal issues.

But the German study is careful to note that there is no evidence at the moment to indicate that cattle can spread COVID-19 back to humans. Bovine coronaviruses are quite different from human coronaviruses, and there has not been any indication that they can be spread across species. Further, there’s no indication at all that any human can contract coronavirus from eating beef.

Hogs, like cattle, have a history with their own types of coronaviruses, including Porcine Epidemic Diarrhea Virus, or PEDv, which is a fairly common coronavirus that attacks the small intestine of hogs. Due to their surprising similarity with humans in terms of organ function and construction, there’s been some interest in figuring out how similar porcine coronaviruses are to human ones, and whether they can spread across species.

To this point, COVID-19 has not been found in hogs, and studies indicate it is not possible for hogs to contract it, as things stand now. But coronaviruses are volatile organisms, inclined to mutate. It is theoretically possible for COVID-19 to mutate in some way that it can be spread through hogs, though there’s been no indication that this has happened or will happen—it’s just something scientists are keeping an eye on.

The same research center that performed the cattle study also tested a bunch of other animals, including chickens—by far the most common food animal in North America. In their experiments, chickens were not found to be able to contract COVID-19 at all.

In May, a goat in Tanzania tested positive for COVID-19, a finding which was dismissed by Tanzania’s president as due to faulty research work. (John Magufuli, the president, has in the past attempted to hide and downplay COVID-19 in Tanzania, and in June declared the country free of the virus due to the prayers of its citizens.)

There has been essentially no systematic testing on sheep or goats, and very few instances of even attempting to test for COVID-19 in these animals. One incident in India, in which a shepherd died of COVID-19 and then several goats also died, prompted a COVID-19 test of the remaining goats, which came back negative. This one essentially remains unknown.

Cats and dogs aren’t meat animals in the US, but are frequently found on farms as herding animals, pest control, or companion animals. Studies have shown that cats can get COVID-19, and will spread it to other cats, but it does not seem to cause any symptoms. More to the point, there’s been no indication that cats can spread it to any species besides other cats.

The same seems to be true of dogs. Some studies have indicated that dogs can and have caught COVID-19 from infected owners, and can spread it to other dogs. But there’s no sign that dogs with COVID-19 become sick, and no evidence that they can pass it to humans. Essentially, dogs and cats seem to get the virus and shed it naturally, with no real effects.

I find interesting that you left out mink farms. We know when a mink contracts Covid 19 the variation of mutations make it more lethal to humans that is why millions of minks have culled, but the more apt word was anything it touched our was buried in was incenterated. Now for cows, the FDA has inhibited the systematic use of Covid 19 testing of cows. The previous administration was very public about this, yet as a Covid-19 Researcher the fact remains meat processing plants has higher rates of Covid even though PPE and distancing was used. What was observed… Read more »

Mink seem to be very susceptible to COVID. Tens of mink farms have been shut down in the Netherlands with all minks culled. There was evidence at least once of mink spreading it back to humans.